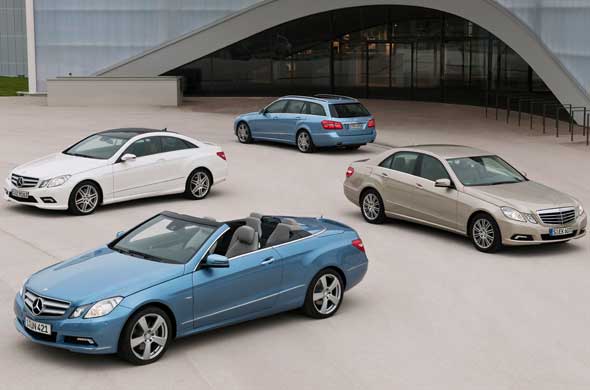 Stuttgart – The E-Class has always taken its place in the ranks of the world’s most popular automobiles. An impressive collection of major national and international awards underlines its exceptional status. Just recently, this public favourite and trendsetter was the recipient of the GOOD DESIGN® Award in the Business category – the oldest award for outstanding product design.

Since its market launch in March 2009, numerous noted national and international institutions and publications have presented highly prestigious awards to the new Mercedes-Benz E-Class. They include e.g. ADAC Motorwelt with the “Yellow Angel” or Auto Bild with the German Design Award. In addition the E-Class family consisting of the Saloon, Estate, Coupé and Cabriolet has won numerous other major awards. For example, during the annual readers’ vote organised by the magazine auto motor und sport, the premium business saloon took first place as “Best Car of the Year” in the upper medium-size category.

The E-Class also notched up many international successes: the Irish Motoring Writers Association voted the E-Class the Continental Irish luxury/sports Car of the Year, the Turkish publication “Otohaber” declared the E-Class to be the Best Car of the Year and in India it won the Road Test Award by the magazine Autocar. The most recent award was from the Chicago Athenaeum – Museum of Architecture – the GOOD DESIGN® Award, which has been presented for almost sixty years and is therefore the world’s oldest design award.

The Mercedes-Benz E-Class particularly impressed motoring juries and readers with its dynamic design, innovative technology, exemplary comfort and excellent economy, as well as an unrivalled combination of driver assistance systems.

The following is a brief selection of the awards received: