At home in every terrain 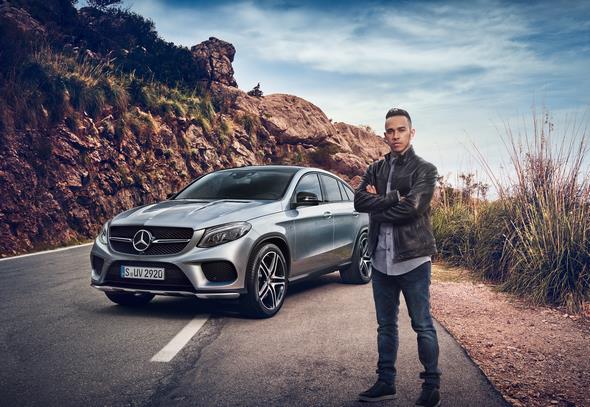 Stuttgart.  Mercedes-Benz is launching a visually stunning, celebrity-studded storytelling campaign to spotlight its SUV family, which is being completely revamped this year and expanded to include six models.

The campaign is to accompany the market launch of the new GLE, GLE Coupé and GLC vehicles. At the same time the 360° campaign positions Mercedes-Benz as the brand with the broadest selection of SUVs in the competitive environment.

The campaign aims to accentuate this under the overriding claim “At home in every terrain”. Each vehicle is therefore shown as part of the family group. 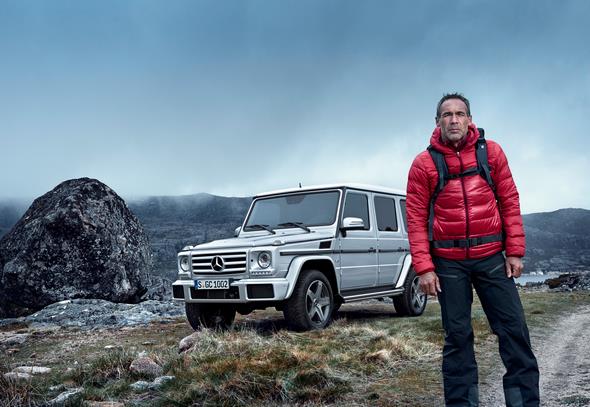 While different landscapes in the print motifs emphasise the character of the different models, the TV ad shows the world of each SUV in conjunction with a celebrity ambassador. 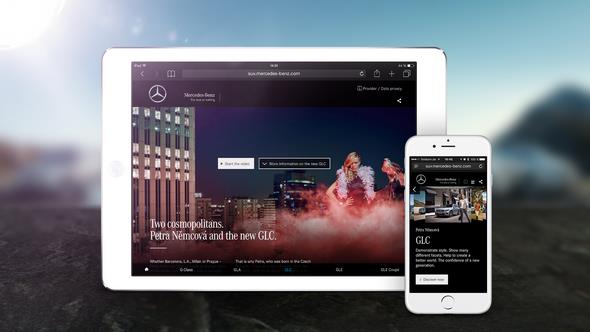 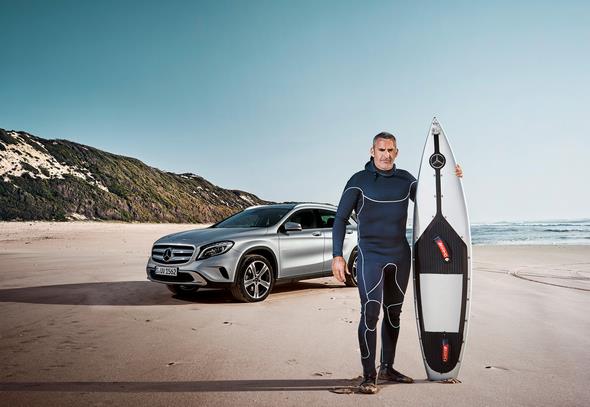 “We are consciously adopting a new approach for the SUV campaign. Instead of advertising individual vehicles separately, we are presenting the entire family of Mercedes off-roaders. 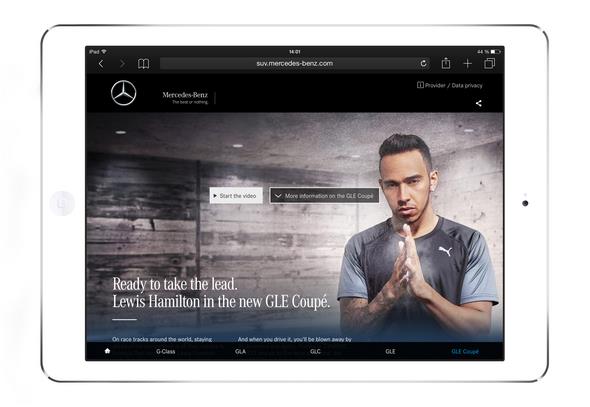 We will be telling exciting stories and creating emotional visual worlds which show each vehicle in its perfect environment – always flanked by the other family members. 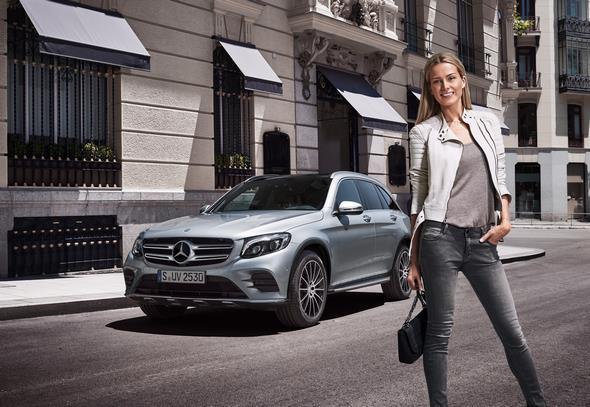 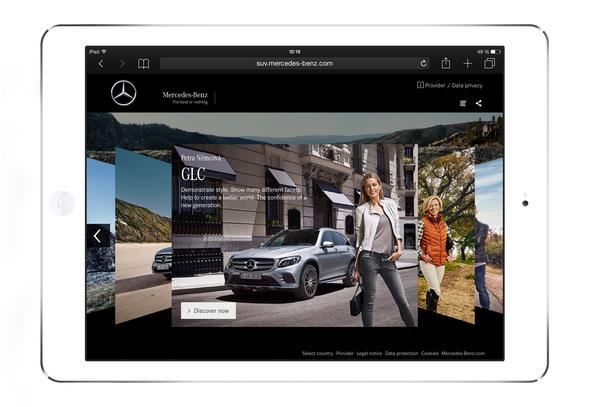 “The overall campaign conveys the characteristics that distinguish our SUVs: effortless superiority, confidence and poise.” 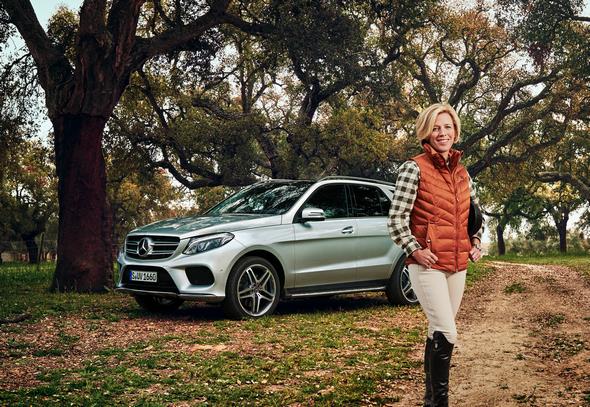 TV ad: five celebrities and five SUVs in their element 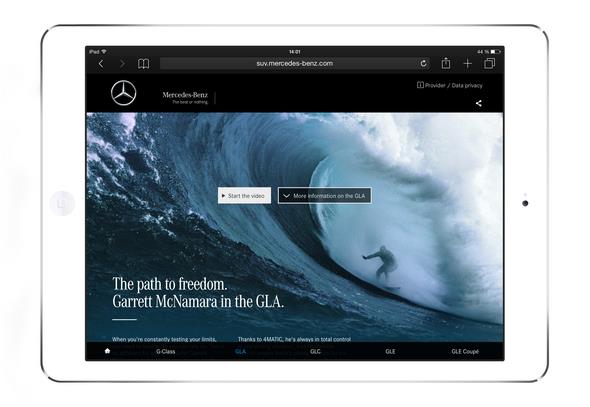 End of the year the GLS will also get a prominent counterpart. Each celebrity is shown pursuing his or her own passion – for example Garrett McNamara is seen big wave surfing and Petra Němcová at a fashion shoot. 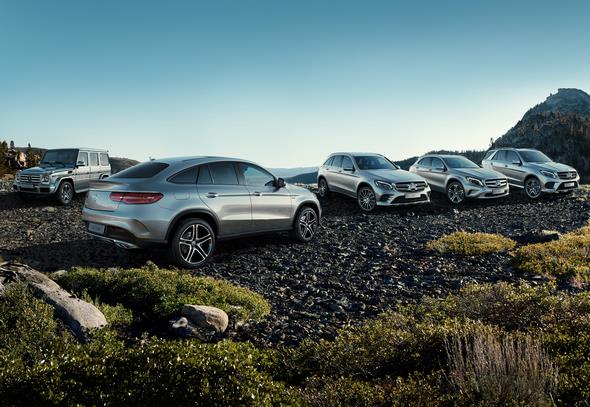 Each will be supported by their vehicle, which also appears very much at home in this environment. The ad ends with the G-Class, the original Mercedes-Benz cross-country vehicle.

In an impressive closing shot all of the SUV models are lined up alongside the G-Class, emphasising the fact that they carry the same genes as the legendary cross-country pioneer. 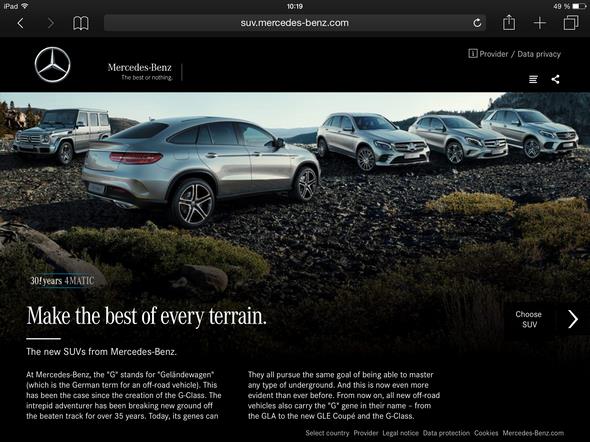 The TV ad is available in various lengths, ranging from ten to 60 seconds and, depending on market requirements, can be used with a different line-up. In Germany the TV ad will be broadcast from 23 August 2015. 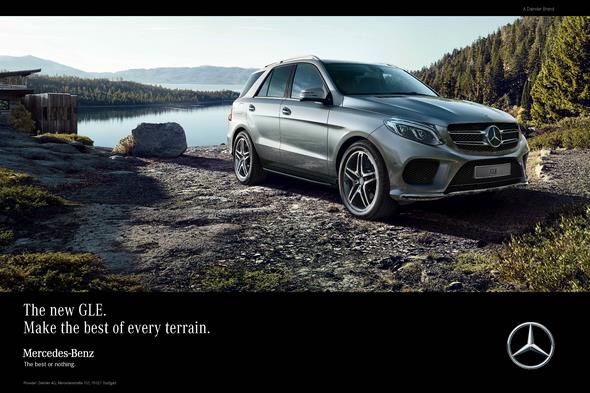 The personal stories that the TV ads tell are to be continued and expanded in a web special, available at https://www.mercedes-benz.com/suv 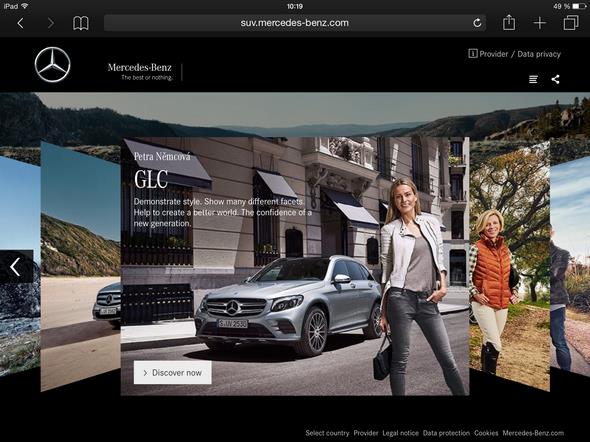 Users select their favourite brand ambassador/SUV team. They are then shown more detailed pages which provide an insight into the fascinating life story of this particular celebrity. 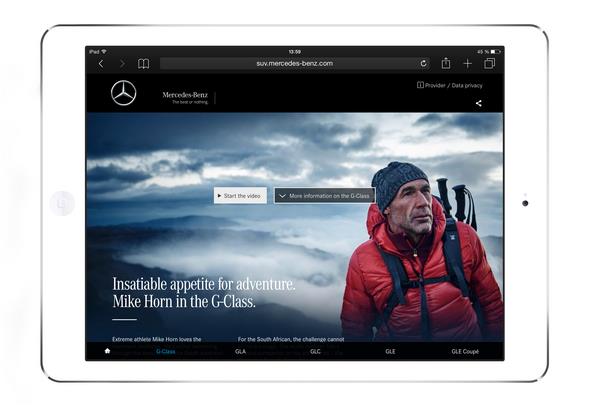 In video interviews they get to know Lewis Hamilton, Mike Horn or Meredith Michaels-Beerbaum and their professions better and learn what spurs them on. 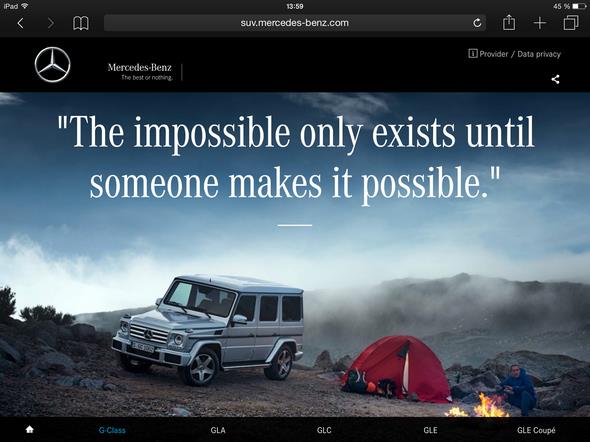 At the same time the user discovers detailed highlights of the relevant Mercedes-Benz SUV. They learn why it is the ideal vehicle for the brand ambassador’s lifestyle and passion. 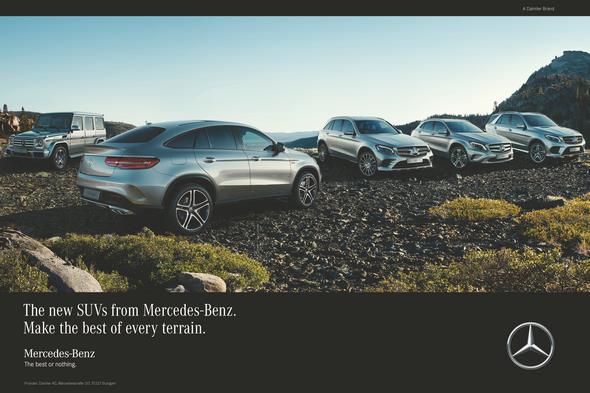 Each portrait ends with the celebrity giving their personal thoughts about the future. 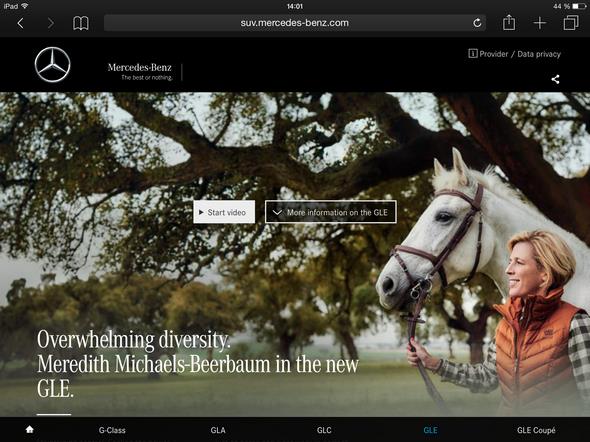 Print ads: positioning of the vehicles against different landscapes

The visual concept of the print motifs focuses on different landscape images to showcase the various SUV models. 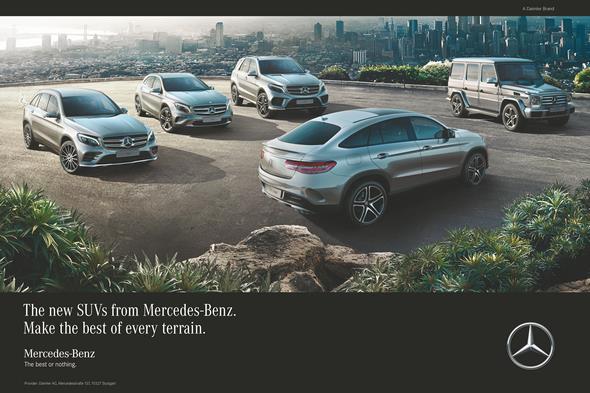 Architecture and environment plus distinctive colour palettes emphasise the character of each vehicle. For example the new GLE is staged on fine gravel by a mountain pass. 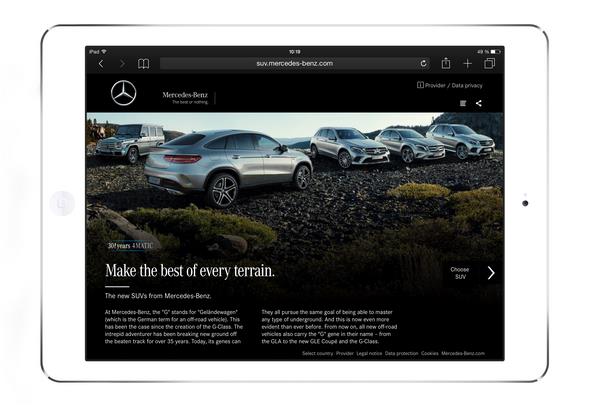 The sun’s rays bathe the green of the landscape in a warm light. The horizon sinks away into the distance below, providing an unobstructed view of a wide expanse of lake. 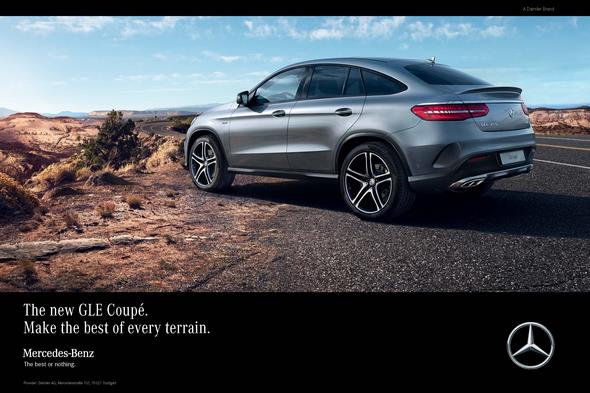 By way of contrast, the new GLC appears in an urban environment. To emphasise the vehicle’s off-road capability, the city is made to resemble off-road terrain. 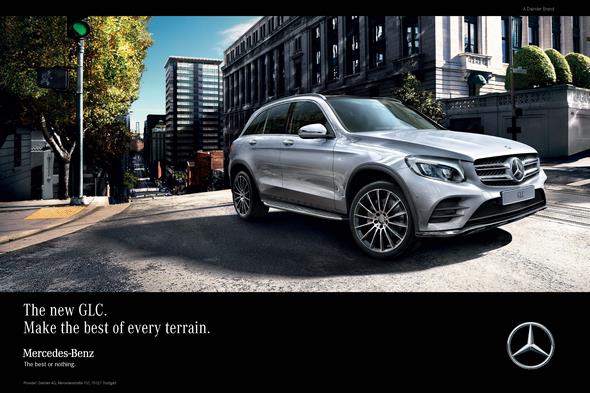 For example the vehicle is parked at the highest point of an urban ravine or on the slopes of a steep road – always surrounded by contemporary architecture. 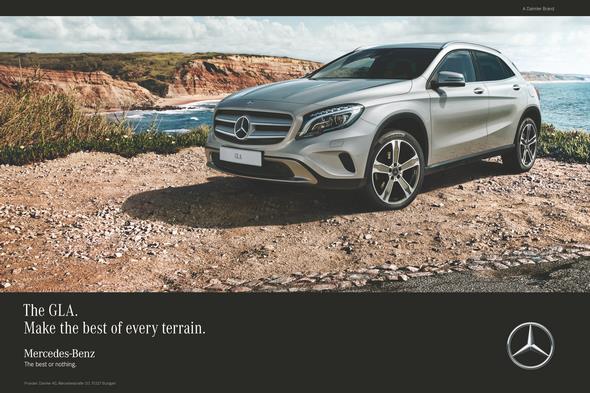 Each model is shown in a different natural or urban setting in keeping with the specified target group. The print campaign will appear in newspapers and magazines across Germany between end of August and November.

Happy back to the future day!