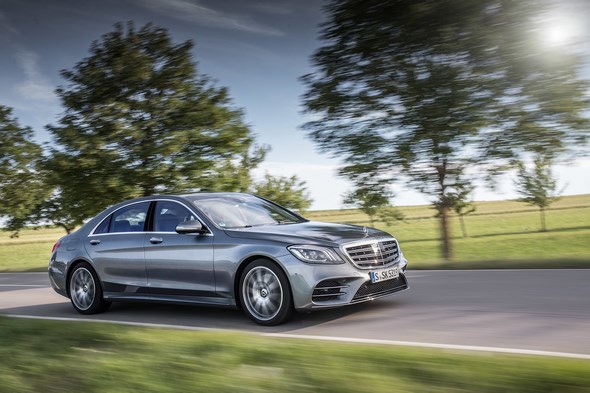 Stuttgart/Affalterbach. With the first of the new SClass vehicles (available to order since May) already on their way to European dealerships, sales of further models are now beginning.

These will take the new SClass Saloon family to a total of 24 models. Buyers have a choice of nine petrol and diesel engines, rear wheel drive and 4MATIC, short and long wheelbase, and models branded Mercedes-Benz, Mercedes-AMG and Mercedes-Maybach. The latest models, which are now available to order, will arrive in dealerships in October.

The 49volt integral starter/alternator is quickly able to provide a further 250 Nm of torque and 16 kW of output. Compared with the similarly powerful S 500 predecessor with a V8 engine, it has been possible to reduce the CO2 emissions of the engine by around 22 percent.

The significant power increase of the six-cylinder petrol engines to the level of the previous eight-cylinder units is also reflected in the model designations: The new six-cylinder models are therefore positioned as the S 450 and S 500.

A new addition to the price list: the dynamics-oriented suspension system MAGIC BODY CONTROL. It detects and smooths out unevenness in the road ahead. In the new SClass this suspension control has been further improved: the system’s new stereo camera works at speeds of up to 180 km/h.

The SClass Saloon’s curve inclination function is another comfort enhancement available for the first time. The body tilts to the inside of the bend by up to 2.65 degrees, thereby reducing the lateral forces acting on the passengers.

All S-Class models feature the latest-generation COMAND Online infotainment system as standard. Films on Blu-ray or DVD, TV, internet, video games, music – the Individual Entertainment System in the rear (3213.00 euros) lets passengers in the rear of the vehicle put together their own personal entertainment programme.

The “COMAND Touch” app has been extended in terms of its functions, especially in the ace of the Rear Seat Entertainment, allowing access via smartphone to various vehicle functions.

A new feature is that passengers in the rear can now study the planned route during the journey and send points of interest along the route to the head unit for the driver.

This also works when the passengers are not online, since the maps can be downloaded in advance for offline use. The “COMAND Touch” App is available free of charge from the Apple™ App Store and Google Play Store. 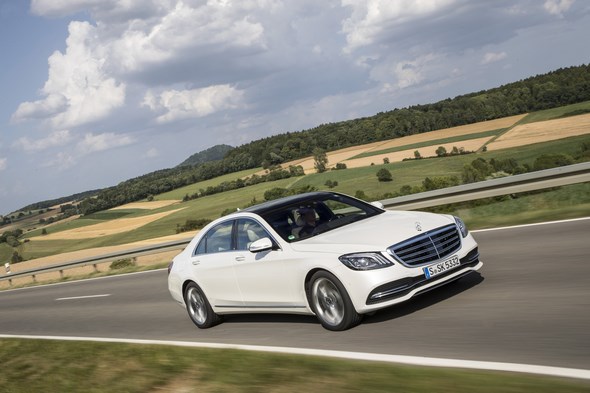 Further equipment highlights:
A host of new and totally revamped assistance systems, including Active Distance Assist DISTRONIC and Active Steering Assist have been bundled together in the optional Driving Assistance package (2737 euros).

With Remote Parking Assist, the driver can manoeuvre the SClass into and out of narrow parking spaces or garages from outside the vehicle via smartphone. Remote Parking Assist is part of the Remote Parking package (4343.50 euros).
Extremely quick and precise adjustment of the driving lights to the current traffic conditions comes courtesy of MULTIBEAM LED.

Via 84 individually controllable LEDs, the light is always switched on exactly where it is needed. The ULTRA RANGE Highbeam generates the maximum light intensity permitted by law.

MULTIBEAM LED with ULTRA RANGE Highbeam is standard on the Mercedes-Benz S 600 as well as on the Mercedes-AMG and Mercedes-Maybach models. For other models there is an additional charge of 1999.20 euros.

The extended ambient lighting (476 euros) showcases the interior like a work of art, composing 10 colour schemes from a total of 64 colours.

The S-Class is the Mercedes-Benz flagship and was the world’s best-selling luxury saloon in 2016. Since 2013 the company has sold well over 300,000 saloons. Since the market launch, around four million SClass Saloons have been delivered to customers worldwide.