Today the trained master mechanic, who will celebrate his 65th birthday on 12 October 2015, regularly sits at the wheel of classic Mercedes-Benz competition vehicles as a Brand Ambassador.

“Mercedes-Benz warmly congratulates Roland Asch on his birthday, and we would like to thank him for his association with our brand and its motorsport history”, is how Michael Bock, Head of Mercedes-Benz Classic and Customer Center, praised Asch’s commitment.

Stuttgart. – On 12 October 1950 Roland Asch was born in Altingen – situated between Tübingen and Herrenberg. At his parents’ car dealership he was interested in engine technology and automotive engineering from a very early age.

This fascination would go on to shape Roland Asch’s professional life: in 1974 he successfully passed the examination to become a master mechanic and in 1982 took over his parents’ business.

By this time the likeable Swabian was already celebrating successes in racing.

His motorsport career began in 1976 with slalom and mountain races, which Asch entered with sporty models of the Ford brand – prepared for use in competitions in his own workshop.

He quickly clocked up racing victories, soon followed by a first championship title: with his Ford Escort RS 2000 Asch secured the German Mountain Trophy in 1981.

Also legendary was the sequence of three championship titles taken in a row in the Porsche 944 Turbo Cup in the years from 1987 to 1989. Asch achieved further victories with Porsche such as the title in the 1991 Porsche Carrera Cup. 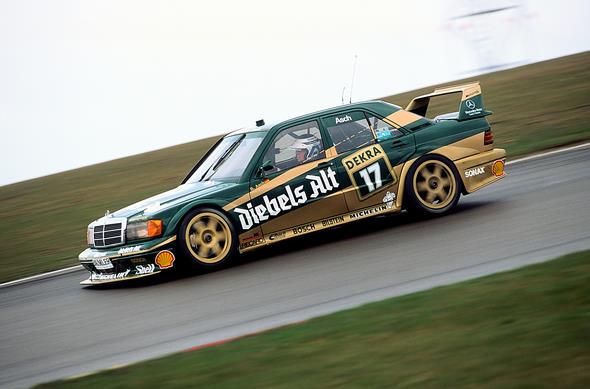 “A handy, good car, which did what I wanted it to” is how Asch today recalls this first racing version of the compact class W 201.

Working during the week in the family’s dealership, he promptly finished runner-up in that DTM season with 242 points, behind Klaus Ludwig (258 points).

It was this success that drew the attention of Mercedes-Benz to the promising DTM driver. Initially the company supported

As early on as 1989 Asch clocked up his first DTM win for Mercedes-Benz at the race in Mainz-Finthen.

The most successful season in the DTM for the man from Altingen was the year 1993 with three victories and his second runner-up spot in the championship in Mercedes AMG 190 E Class 1 racing tourers.

Until the 1994 season Roland Asch drove for Mercedes-Benz in the DTM, then the racing driver continued to be active in various racing series on the circuit.

Today the father of three, valued by his fans for the sporting successes as much as for his open and amenable nature, is still active as a Brand Ambassador at the wheel of Mercedes-Benz racing cars.

Alongside the DTM versions of model series W 201 – including the 190 E 2.5-16 EVO II constructed for historical motorsport by Mercedes-Benz Classic – Roland Asch also drives other racing cars from the impressive motorsport history of the Stuttgart brand.