Stuttgart: The two former Formula One drivers David Coulthard and Ralf Schumacher will once again be racing the AMG Mercedes C-Class for the 2011 season. They are the best-known members of the DTM Mercedes-Benz teams. Both drivers each have more than twenty years’ motor racing experience, and from a joint total of 426 Grand Prix starts they secured 19 Formula One wins between them. David Coulthard and Ralf Schumacher have quickly become fan-favourites in the DTM.

David Coulthard, 40, Scotland, made his DTM debut in 2010. He marked the end of his first year by securing his best result of the season at the final race in Shangai (8th place) and by posting the fastest lap. In 2011, the Scotsman will line up on the grid once more for Team Mücke Motorsport in the Deutsche Post AMG Mercedes C-Class.

As an ambassador of ‘Wings for Life’, David Coulthard is keen to make the public more aware of this charitable foundation for paraplegics. The Scotsman hopes that his efforts will help the charity with its research into treatment for people suffering from spinal injuries. By agreement with team sponsor Deutsche Post, Mercedes-Benz are also making display space available on the bodywork of Coulthard’s car to publicise ‘Wings for Life’ and the work that he does for the organisation.

Ralf Schumacher, 35, Germany, began his DTM career on 13th April 2008 in Hockenheim and quickly became one of the most popular drivers in the championship. 2011 will be his fourth DTM season and his first in the AMG Mercedes C-Class with his new title sponsor Salzgitter.

Schumacher concluded his Formula One career at the end of 2007 after eleven seasons and 180 Grand Prix races. Having secured six Grand Prix victories, he is the third most successful German Formula One driver in history after his brother, MERCEDES GP PETRONAS driver Michael Schumacher, and reigning world champion Sebastian Vettel.

David Coulthard: “I’m very pleased to be contesting the DTM series once more in 2011 for Mercedes-Benz. My year of apprenticeship is over – now I’m looking to make some real progress. DTM motor racing is a close-fought championship and is characterised by the fans’ enthusiasm and the direct contact between drivers and spectators. That’s something that I wasn’t familiar with in Formula One. For me, DTM is also an excellent platform for raising public awareness of the ‘Wings for Life’ charity. I learnt a lot last year, and have laid good foundations for my second season. After gaining my first DTM point at the final race of the season in Shanghai in 2010, I would like to make my fans happier this season by scoring points more often.”

Ralf Schumacher: “I really like being a part of DTM and the Mercedes-Benz family. Subtle nuances are important in this hard-fought series. If you can just improve the car’s setup by a fraction, then you can reduce your lap times significantly. After three years in the DTM and two seasons with the HWA team, I feel at ease in the AMG Mercedes C-Class and I’m ready, together with my new sponsor Salzgitter, to make the next move in my fourth DTM season.”

Norbert Haug, Vice-President Mercedes-Benz Motorsport: “We’ve got two of the DTM fans’ favourites, David and Ralf, in our team again for 2011. David adjusted quickly to DTM racing and improved continually during his first season – finally securing his first point and posting the fastest lap time in Shanghai. I trust that he will continue to improve in his second DTM season. It’s Ralf’s fourth DTM year and he’s already got a lot of DTM experience, and I’m certain that he can do even better. Ralf’s pole position at the Norisring proves that he’s got the potential.”

Salzgitter AG is one of the leading steel engineering companies in Europe. The company employs around 24,000 people worldwide and produces on average 8 million tonnes of crude steel per year. Salzgitter AG has set itself a medium-term net revenue target of 12-15 billion euros. The group consists of 200 subsidiary and affiliated companies in Germany and abroad. It is constituted as a management holding with five divisions: Steel, Trading, Tubes, Services and Technology. Salzgitter AG shares are traded on the MDAX. Its most important customers are automotive manufacturers and their suppliers, with whom Salzgitter AG not only enjoys a close business relationship but also cultivates numerous research and development partnerships. In the 2011 DTM season, Ralf Schumacher will be lining up in a Salzgitter AMG Mercedes C-Class.

As a provider of modern communication services, this company has to be on top form around the clock. Every day, its postal delivery workers handle 70 million items of mail. In international comparisons, Deutsche Post consistently achieves the best scores for reliability and speed. More than 95 percent of national deliveries are made the following day. With its network of branch offices covering the whole country and its 80,000-strong workforce, Deutsche Post is able to assure its customers of optimum dependability. It is this strength in depth that underscores the claim of Deutsche Post to be the postal provider for the nation. The E‑Postbrief electronic mail service introduced in July 2010 has proved to be a huge success, enabling private individuals, companies and government bodies to transmit confidential messages and content by dependable recorded delivery. In the 2011 DTM season, David Coulthard will once again be competing in a Deutsche Post AMG Mercedes C‑Class.

David Coulthard was one of the first star names to put himself forward as an ambassador for ‘Wings for Life’. The Scotsman has been working very hard on behalf of the foundation for many years now, publicising its work around the world and drumming up financial contributions for the charity’s research projects. The highlight of his involvement came on 2nd November 2008 when David dedicated his final Formula One race to the organisation and designed the entire bodywork of his Formula One car with a ‘Wings for Life’ livery. In 2011, David has once again dedicated the personal sponsorship display area on his DTM race overall to ‘Wings for Life’.

Speaking about his role as ambassador, David Coulthard said: “In motor racing, it’s all about seconds, whereas in medicine, they think in terms of years. But in both disciplines, determination and the will to succeed are indispensable if you are going to reach your goal in the fastest possible time. By making a donation to ‘Wings for Life’, you help to bring about a breakthrough in research into spinal injuries. That’s why your donation really counts.”

The state-certified charitable organisation ‘Wings for Life’ was founded in 2004 with the mission of driving forward research into the treatment of paraplegia. ‘Wings for Life’ invests in the world’s most promising medical science projects aimed at finding cures for spinal injuries, focusing in particular on new methods for improving the quality of life for paraplegics. Every donation to ‘Wings for Life’ goes 100% towards financing this research. 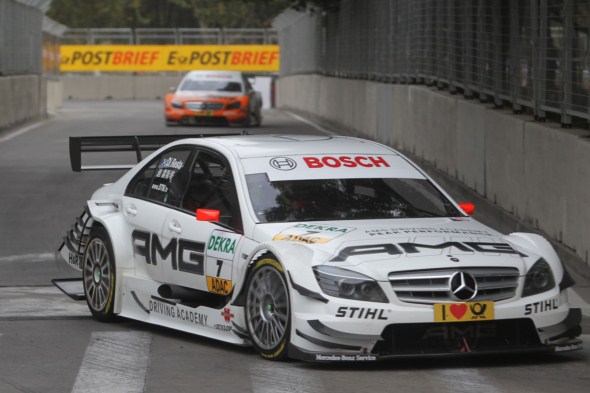