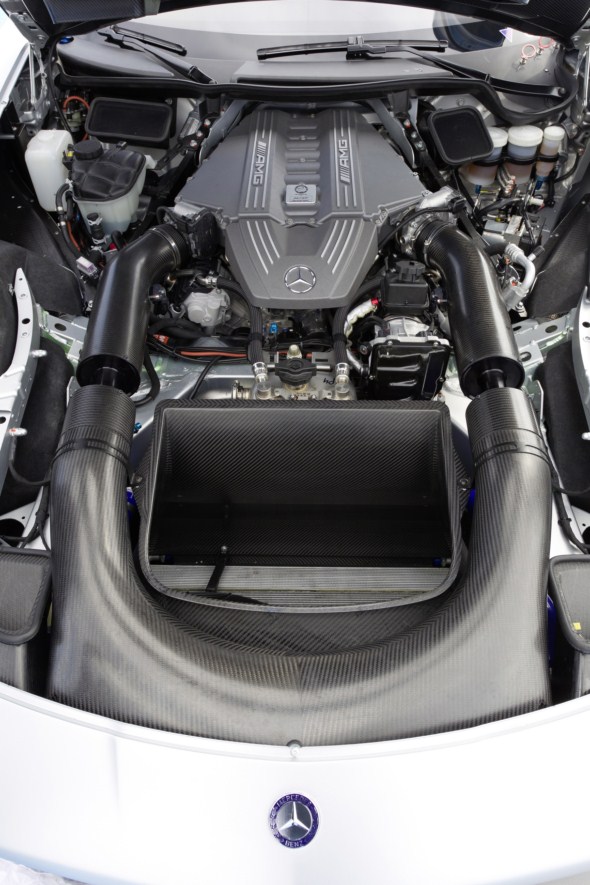 Ready for the 2011 VLN season, with exemplary levels of safety

Affalterbach – The SLS AMG GT3 will shortly be embarking on its first racing season, when Saturday, 2 April 2011 sees the start of the new VLN season (Nürburgring Endurance Championships). Six customer teams will be competing on the North Loop with the racing version of the gull-wing model. The SLS AMG GT3 is perfectly prepared for use on the racetrack, as its safety concept transfers the exemplary safety level of Mercedes-Benz on‑road models to the racetrack. Extensive, sophisticated crash tests and trials have confirmed these high standards.

Compliance with the stringent safety standards of Mercedes-Benz was a central consideration for the SLS AMG GT3. The development focus was on the greatest possible protection for the driver in the event of an accident. Accordingly its construction creates outstandingly favourable conditions in this respect – both in terms of the structural safety of the aluminium spaceframe, direct protection of the driver against impact loads and fire protection. 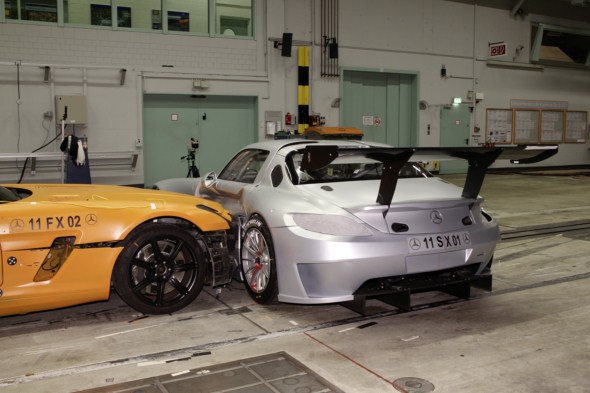 One prominent feature in the interior of the SLS AMG GT3 is the bucket seat, which is positioned within a safety cell of high-strength CFRP (carbon-fibre reinforced plastic) as in the DTM cars from Mercedes-Benz. Thanks to its special shape the safety cell, which is bolted to the rollover cage and the aluminium spaceframe, provides considerably higher protection for the driver’s shoulders, hips and legs. 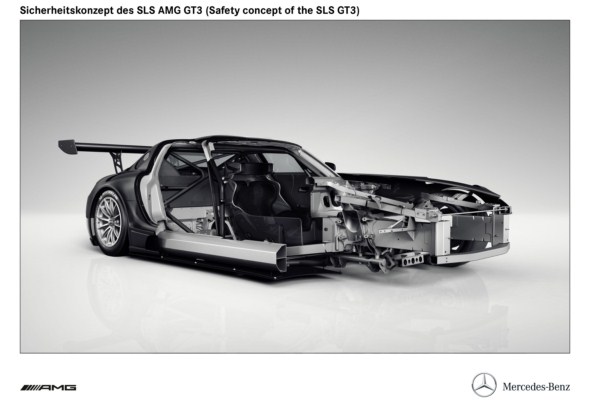 It is also compatible with the HANS system (Head and Neck Support). The HANS system helps to prevent serious head, neck and spinal injuries, and is mandatory in many race series. The bucket seat is individually foam-contoured for each driver, features a six-point seat belt with reinforced anchorages and provides occupant protection to the highest level. 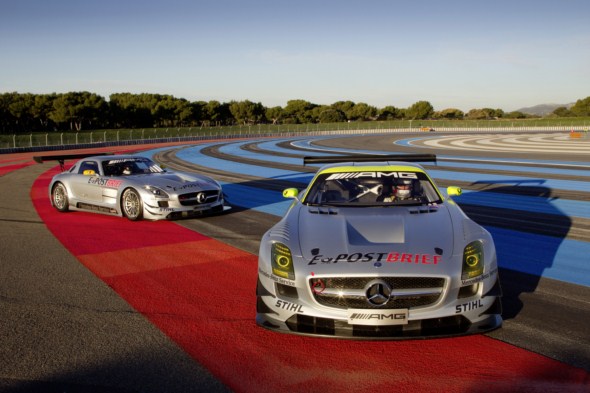 Additional protection is ensured by the rollover cage of high-strength steel, which is bolted to the aluminium spaceframe and gives this further rigidity. The 120-litre CFRP safety fuel tank is located directly over the rear axle for optimal crash protection, and features an elastic inner fuel bladder.

The exemplary safety standard of the SLS AMG GT3 was verified with the help of numerous crash tests at the Mercedes-Benz Technology Center in Sindelfingen – where the passive safety features of all series-production AMG and Mercedes-Benz models are also developed and tested. Such extensive and sophisticated crash tests were previously unprecedented in the GT3 segment. 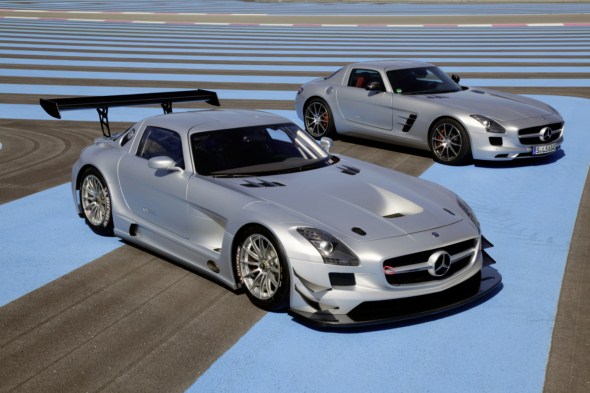 The safety specialists carried out three crash tests and a static test with the racing version of the gull-wing model: a front, side and rear impact plus a roof deformation test. All the test configurations were specifically chosen to reflect typical racetrack accident situations as closely as possible. 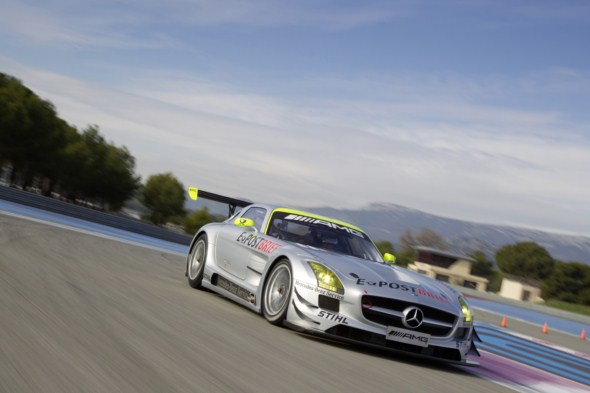 The frontal impact simulated a collision with a wall, such as might occur in the pit lane or – as may typically happen on urban circuits – with the side barrier marking the course. The vehicle impacted the rigid test barrier at an angle of 30 degrees. During this oblique impact only the left side member of the aluminium spaceframe collided, which placed greater stresses on the bodyshell structure. The impact speed was 50 km/h. 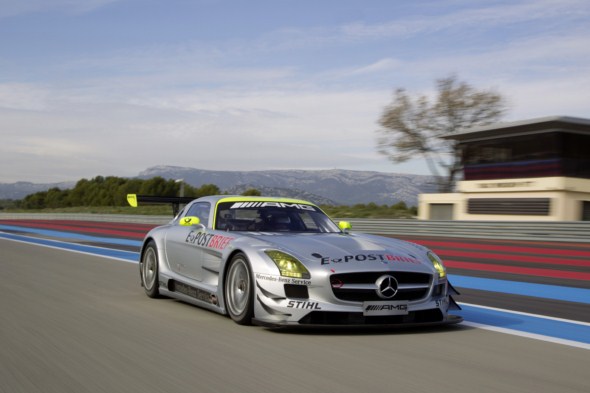 In the side impact test the SLS AMG GT3 was rammed by an identical car of the same model at an angle of 90 degrees, and exactly at door height. The impact speed was 50 km/h.

In the rear collision test the gull-wing was likewise struck by a rigid barrier at 50 km/h, with 100% overlap. 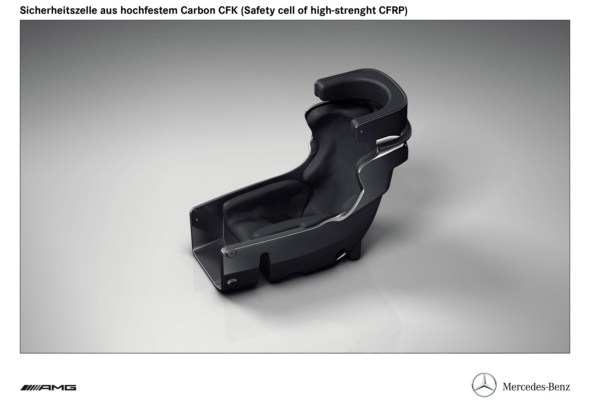 The static roof deformation test simulated the loads that may occur during a rollover. In this cased a ram impacted the so-called A-pillar node with a precisely defined force. The rollover cage beneath the roof skin is of high-strength steel, and after the test it practically returned to its original shape.

The results underline the exemplary safety standard of the SLS AMG GT3: during every crash and impact test the driver’s survival space was maintained, which confirms the rigidity of the vehicle structure. Moreover, the measured loads acting on the GT3 driver were all below the biomechanical limits considered to be critical.

Automatic release of the roof hinges

Like every series-production SLS AMG, the GT3 version is equipped with four pyrotechnical elements on the hinges of the gull-wing doors. These allow a rapid exit for the driver, or fast access by emergency personnel, should the vehicle be lying on its roof after an accident. They are activated by the driver, using a switch on the centre console. 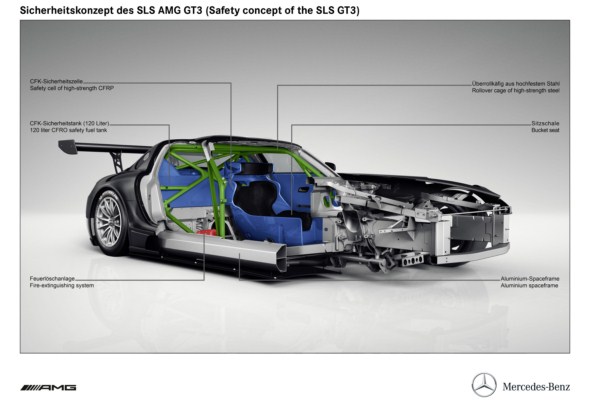 Should he be incapable of doing this himself, the emergency personnel are able to pull on a ring easily located on the lower edge of the windscreen and marked “Emergency Exit”. The four pyrotechnical elements are then triggered, and release two roof hinges retaining each of the two gull-wing doors. When the interior door catch or external door handle is operated, the driver is able to exit or receive emergency care.

In addition the SLS AMG GT3 has polycarbonate side windows which can be easily removed by the driver or emergency personnel after an accident. The crash-protected location of the battery next to the centre tunnel, as well as the interior and exterior switches cutting off the power circuit, further demonstrate the efforts made for the greatest possible protection of the SLS AMG GT3’s driver. 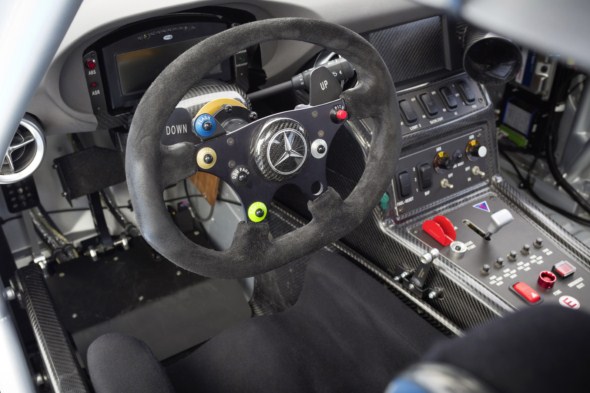