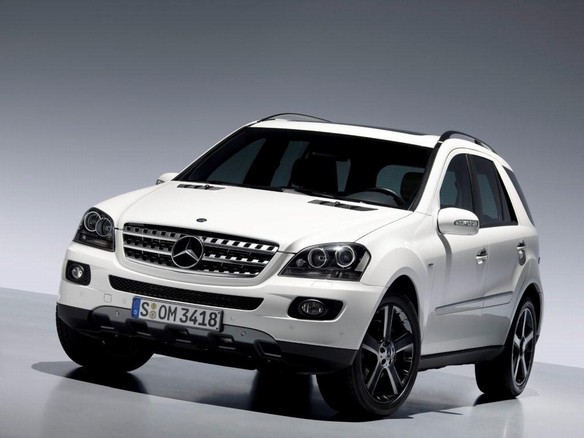 Mercedes-Benz is celebrating the 10th birthday of its successful M-Class, the top-selling premium SUV with 850,000 units to its name. To mark the occasion, Mercedes-Benz is bringing out the attractive special Edition 10 model. The specification includes 20-inch wheels, bi‑xenon headlamps and special bodywork highlights in titanium-look as well as dark-tinted tail lights. The sporty, refined interior features two-tone all-leather appointments, sports instruments and stainless steel sports pedals. The Edition 10 can be ordered from autumn 2007. 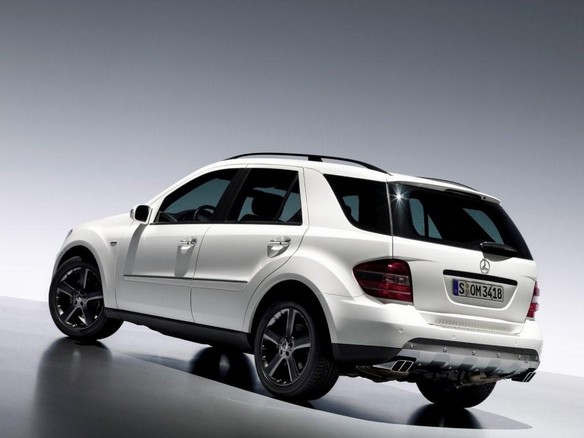 The Edition 10 is a fitting tribute to mark the tenth anniversary of the most successful Mercedes-Benz premium SUV. It recalls the market launch of the M‑Class a decade ago, a vehicle now regarded as the pioneer of the premium SUV. Compared with the series-production models, the anniversary edition sporting the special Edition 10 logos on the wings features even higher-grade appointments and is instantly recognisable from the exterior, courtesy of its eye-catching design and engineering details. Highlights include the 20-inch light-alloy wheels shod with 265/45 R 20 V tyres. 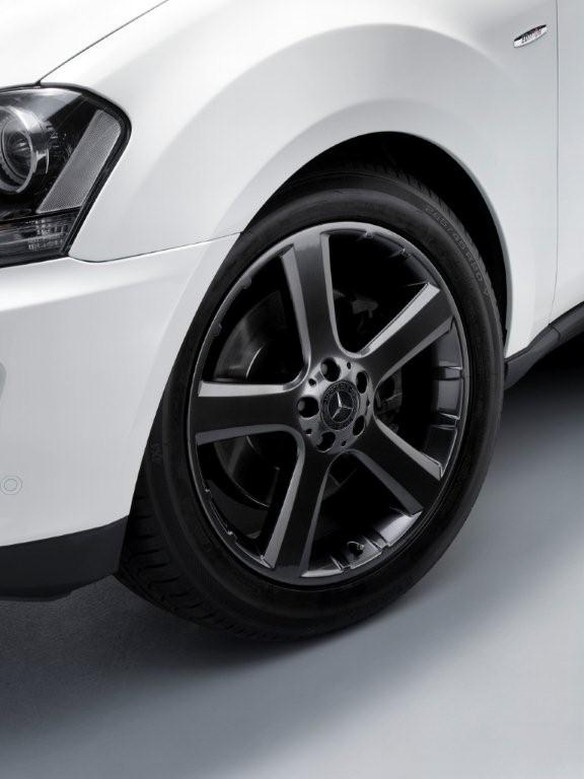 Depending on the customers preference, the light-alloy wheels in gleaming silver provide an interesting contrast to the Edition 10 design ‑ or blend in harmoniously with if the darkened chrome shadow finish is specified. The darkened housings for the bi-xenon headlamps with Active Light System and identically styled fog lamps with integral cornering light function lend the vehicles front end an even more striking appearance. The package of measures at the front end is rounded off with a special radiator grille and simulated stainless steel underride guard, both in titanium-look. Dark-tinted tail light clusters, a simulated stainless steel underride guard in titanium-look and twin-pipe exhaust system with separate chrome tailpipes adorn the rear of the M-Class Edition 10. Blue-tinted glass and special chrome trim elements on the door handles, rub strips, radiator grille and rear bumper add the finishing touches to the striking appearance. The special model is available in obsidian black, iridium silver or calcite white. 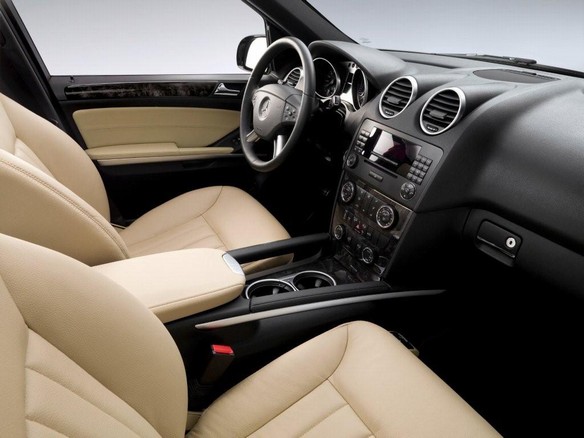 The two-tone all-leather appointments in cashmere beige and black create an interesting contrast in the interior. The black roof lining, the sports instrument cluster and wood trim elements either in anthracite poplar or pale birch further enhance the interior refinement. Velour floor mats with an embroidered Edition 10 logo welcome occupants, while the driver can enjoy the special touch of brushed stainless steel sports pedals. Power-adjustable front seats and the interior lighting package round off the specification.
The standard equipment of the powerful trendsetter includes the seven-speed automatic transmission 7G-TRONIC with DIRECT SELECT, ESP, 4MATIC permanent all-wheel drive and the 4ETS traction system with additional functions including Downhill Speed Regulation, hill-start assist and off-road ABS. Difficult terrain is easier to negotiate with the optional Off-Road Pro engineering package, which includes a low-range ratio, electronically controlled multi-disc differential locks for the centre and rear differentials and increased ground clearance. Optional extras include the AIRMATIC air suspension system with the Adaptive Damping System ADS, the COMAND APS telematics system or KEYLESS-GO, all of which add extra comfort and convenience.
A choice of five Edition 10 models
In addition to the powerful V8 diesel engine with its 700 Nm of torque in the ML 420 CDI 4MATIC, two superlative V6 diesel units are available. The V6 entry-level unit in the ML 280 CDI produces 140 kW / 190 hp, the ML 320 CDI develops 165 kW/224 hp from the same displacement. The ML 350 and the ML 500 with the new 5.5-litre V8 unit bring two petrol versions to the line-up with outputs of 200 kW/272 hp and 285 kW/388 hp respectively.
Ten years in Tuscaloosa  a German-American success story
The first generation of the M-Class (W 163) was launched in 1997, paving the way for todays premium SUVs. Fitted with all-wheel drive as standard, it combined the comfort and handling safety of a passenger car with the ruggedness of an off-road vehicle. The Sports Utility Vehicle also offered ample room and optimum adaptability, virtually assuring its success from the off: some 600,000 units of the first-generation M-Class were sold worldwide before it was replaced by the all-new model generation in 2005. The W 164 series consummately perpetuates this success story; around 250,000 Mercedes-Benz customers have already purchased this model. 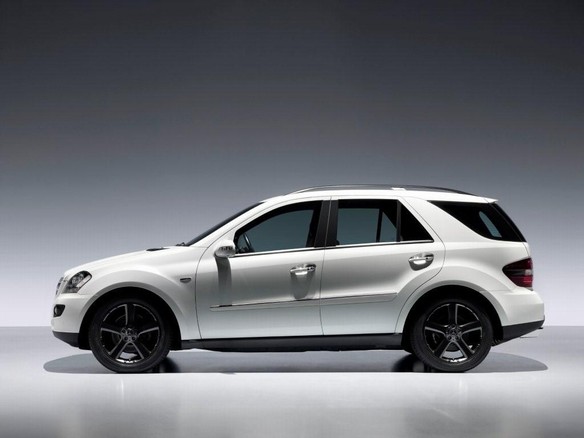 Like the first generation, the current M-Class is manufactured at the DaimlerChrysler Tuscaloosa plant in the U.S. state of Alabama. The production facility was opened on May 21, 1997, two years after construction began, and was the first Mercedes-Benz passenger car plant outside Germany. Shortly after production started, worldwide M-Class demand easily outstripped forecasts. In addition to the initial 300 million U.S. dollars, the company invested another 100 million U.S. dollars to increase capacity from 60,000 to 80,000 vehicles a year. In 2002, more than 88,000 M-Class vehicles were produced in Tuscaloosa, setting a new record. Between 1999 and 2002, the M-Class was also produced at Magna Steyr in Graz, Austria, where the legendary G-Class is built.
The Mercedes-Benz all-wheel-drive story began a hundred years ago
In addition to marking the 10th anniversary of the model series, the launch of the M-Class Edition 10 in 2007 also recalls another significant event. In 1907 exactly a hundred years ago  the Berlin-Marienfelde plant rolled out the worlds first all-terrain all-wheel-drive passenger car. This one-off vehicle, painstakingly designed by Paul Daimler, was used by the German Imperial Colonial Office in German Southwest Africa, now Namibia. The technology used in the 3.6-tonne vehicle with its touring car body and six seats was ahead of its time. In addition to the permanent all-wheel drive, the large vehicle even had all-wheel steering for better manoeuvrability. The entire powertrain was encapsulated, making it perfectly suited to the ubiquitous dusty desert tracks of German Southwest Africa. A sturdy underride guard protected the transmission.
The Dernburg Wagen, named after Bernhard Dernburg, the head of the German Imperial Colonial Office, was used successfully for several years, mainly in the area around Windhoek and Swakopmund, and clocked up no less than 10,000 kilometres. The trail of this unique vehicle went cold in the post-colonial era its whereabouts are now a mystery.