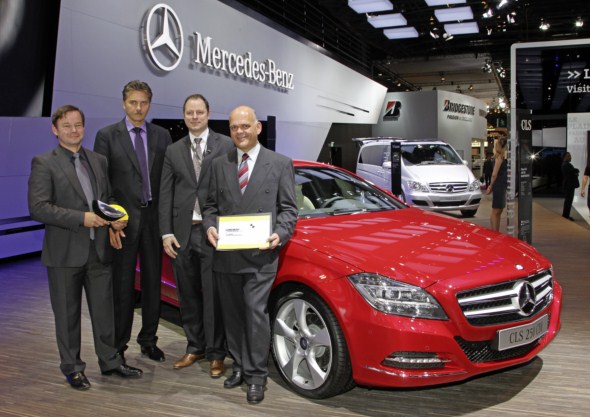 The new safety prize from Euro NCAP, which has been introduced to complement the association’s well-known five-star assessment scheme, is designed to reward automotive manufacturers who offer systems featuring “scientifically proven safety benefits”, and which are not taken into account under the existing assessment scheme.

“We are extremely pleased to have received the prizes”, explained Prof. Schöneburg, “as they represent confirmation of our holistic safety philosophy. Following a successful commitment to occupant protection, our primary focus is now squarely on the prevention of traffic accidents and the mitigation of their severity, in line with our ‘Real Life Safety’ approach.”

In 2002 Mercedes-Benz became the first automotive brand to offer an anticipatory occupant protection system, called PRE-SAFE®, which takes measures to protect the occupants of the vehicle if there is an imminent risk of an accident. Analyses performed during crash tests show just how important and effective anticipatory occupant protection can be.

In the case of belt tensioning, for example, the precautionary measures mean that the driver and front passenger are held in their seats in the best possible position and so do not move forwards as much prior to the impact, as a result of emergency braking for example, thus reducing the loads exerted.
These tests showed that the head of the dummies was subjected to around 30 percent less stress, while the Mercedes engineers recorded a reduction of around 40 percent in the neck area.

Mercedes-Benz achieved a further milestone in 2006 with the PRE-SAFE® Brake which enables Mercedes-Benz passenger cars to brake autonomously in the event of an impending front-end collision. The latest development stage of this safety system has now been in use since 2009: if the driver fails to react even after automatic, partial braking, the radar-based PRE-SAFE® Brake activates the maximum braking pressure around 0.6 seconds before what is now recognised as an unavoidable accident – an emergency braking action which can significantly reduce the severity of the impact even further.

Occupant protection actually begins in the phase leading up to a possible accident thanks to the Mercedes invention PRE-SAFE®, which is specified as standard on the E-, M-, R-, GL-, S-Class, CLS and CL-Class. It is also available as an optional extra on the C-Class and GLK.

Just as living things react instinctively and search for cover when they are in danger, PRE-SAFE® activates protective measures for the car occupants as a precaution when detecting the signs of an impending accident, so that the seat belts and airbags are able to fulfil their protective function to the full during an impact. This early accident detection is possible because PRE-SAFE® is a synergy of active and passive safety: the anticipatory occupant protection system is linked to the Brake Assist and Electronic Stability Program ESP®, as well as numerous other driver assistance systems, whose sensors can detect critical driving and traffic situations and send the relevant information to the electronic control units within a matter of milliseconds. PRE-SAFE® also makes use of these sensor data.

When PRE-SAFE® detects for example that skidding is imminent, when the driver brakes sharply or the PRE-SAFE® Brake has intervened, depending on the vehicle equipment the system moves the front passenger seat into the most favourable position to be in when faced with accident conditions, for example.

At the same time the system automatically begins to close the side windows and sliding sunroof, if appropriate, so that no objects can enter the vehicle and the window airbags can provide better support in the event of a side impact or if the vehicle should roll over. The occupants are prepared for the potential collision by reversible tensioning of the seat belts and repositioning of the front passenger seat, enabling the seat belts and airbags to offer the best possible protection.

Mercedes-Benz offers the radar-based PRE-SAFE® Brake system for the E-, S-, CL-Class and the new CLS. If the driver is distracted and therefore fails to heed the immediate danger of a rear-end collision or the warning signals of a driver assistance system, the PRE-SAFE® Brake is able to intervene and brake the vehicle autonomously.

This process has two stages: around 1.6 seconds before the calculated impact point – after three visual and audible warning signals – the system initiates partial braking autonomously, decelerates the car with around 40 percent of the maximum braking power (approx. four m/s²), and as a precaution activates the PRE-SAFE® reversible occupant protection systems.

Designed to supplement the visual and audible warnings, autonomous partial braking gives the driver a further, perceptible signal to act. If the driver brakes immediately then the maximum braking pressure is made available, or if he swerves then the accident can be avoided at the last moment, depending on the driving conditions.

If the driver fails to react even after this autonomous partial braking, the PRE-SAFE® Brake is able to activate maximum braking pressure around 0.6 seconds before what is now recognised as an unavoidable accident – an emergency braking action that can significantly mitigate the severity of the impact.

Practical trials conducted by Mercedes engineers have shown that the impact speed is reduced by up to 30 km/h, and the system therefore acts like an “electronic crumple zone”.