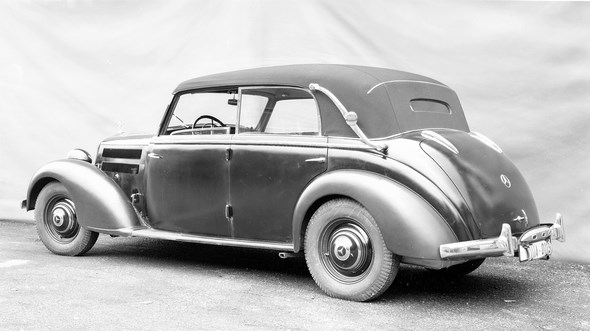 Just two and a half years after successfully establishing a new six-cylinder luxury mid-size model in the form of the 230, Daimler-Benz unveiled its successor at the International Motor and Motorcycle Show in Berlin. 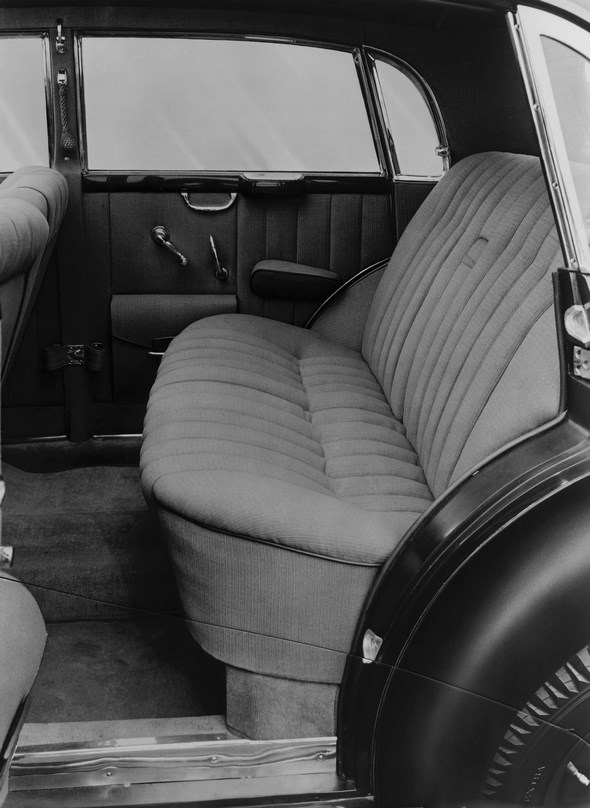 As the new model carried the same model designation as its predecessor, and also with the new design code W 153 being easy to mistake for the old one, it is not just today that the 230 is often the source of some confusion. 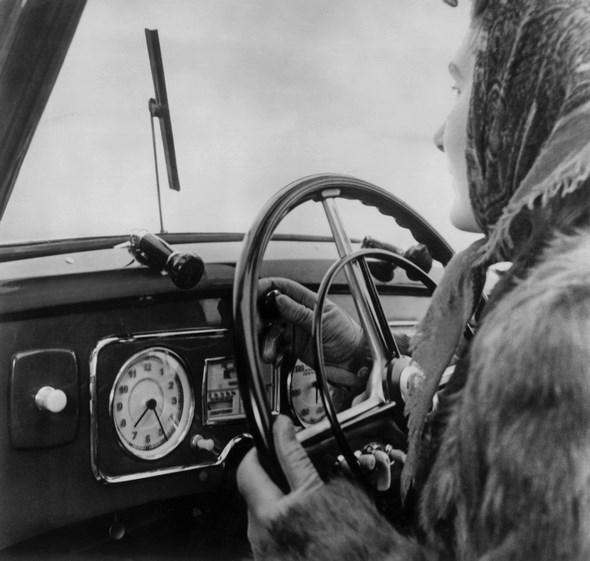 The problem is further compounded by the fact that the new model generation rolled out in 1939 was confined to the two-seater and four-/five‑seater variants, while the W 143 was retained in the form of the pullman saloon, pullman landaulet and open tourer. 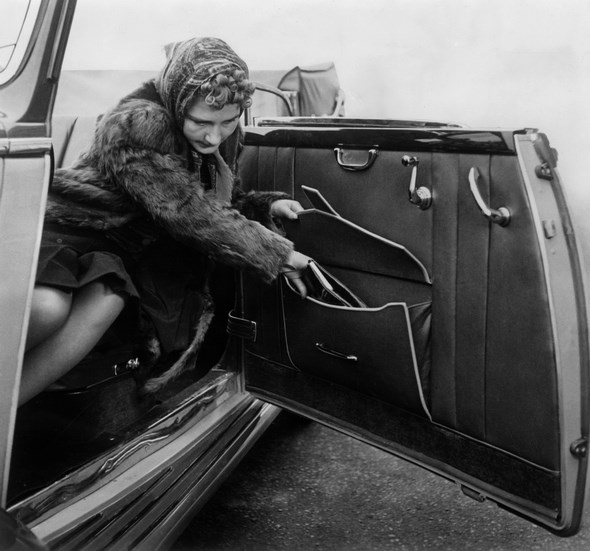 Although the W 153 never attained the production volume of its predecessor due to the outbreak of war, it was one of the key models of the late 1930s – even though neither its styling nor its technology can be considered revolutionary. 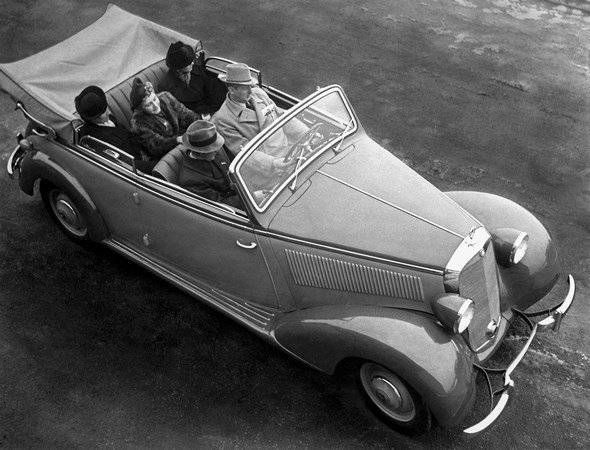 The engine, with only detailed improvements, was taken over from the predecessor. To address the deteriorating quality of petrol, the compression was reduced to enable the engine to remain fully operational even when run on 74 octane fuel. 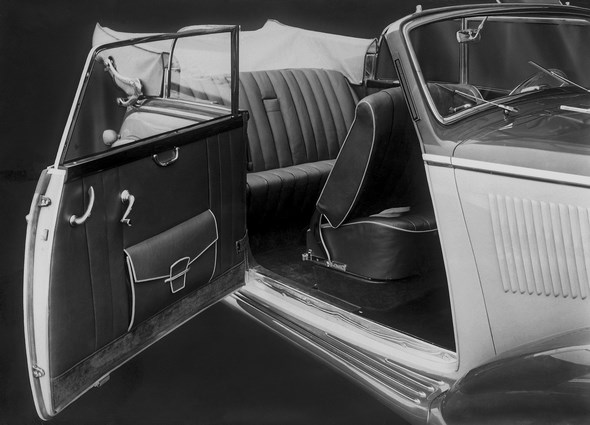 To compensate for the associated loss of power, the combustion chambers were modified, while 60 ccm was added to the displacement by widening the bore. 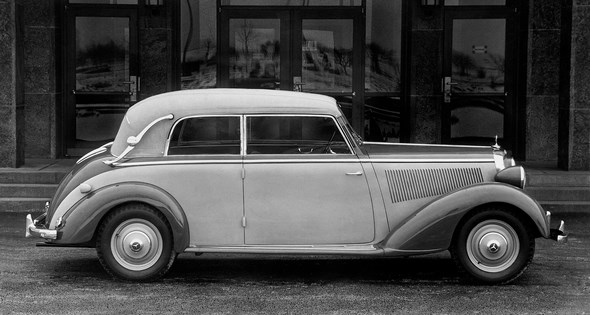 The intake manifold was now automatically heated by means of a bimetallic heating element. The revised version of the 2.3‑litre engine was given the internal designation M 153. 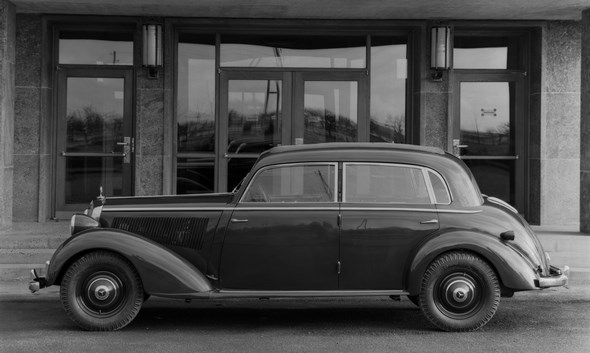 The front and rear axles on the W 153 were broadly the same as on the W 143. As far as the chassis was concerned, it was decided to go new ways. 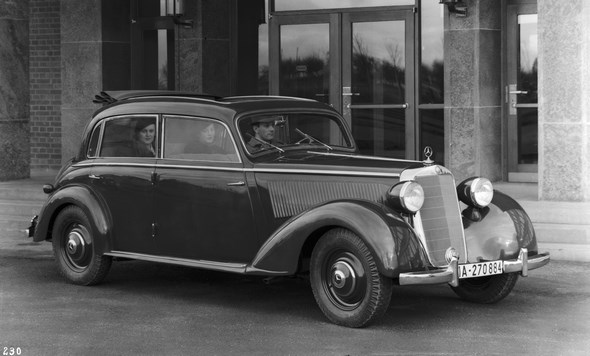 The positive experience with the X-shaped oval tubular frame on the 170 V was now applied by chief designer Max Wagner to a larger model. 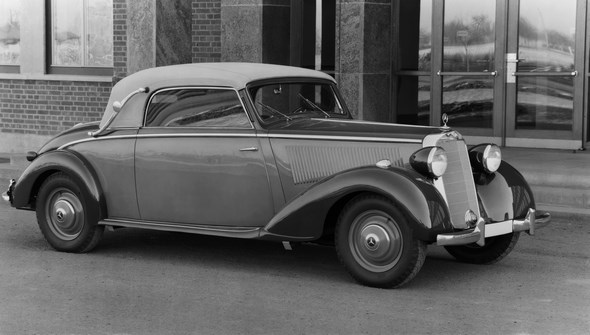 As in the W 143 with its box-section frame, the 3050 mm wheelbase was retained. After the war, the chassis concept and wheelbase of the W 153 were copied to the 300, the first newly developed prestigious Mercedes-Benz model of the post-war era. 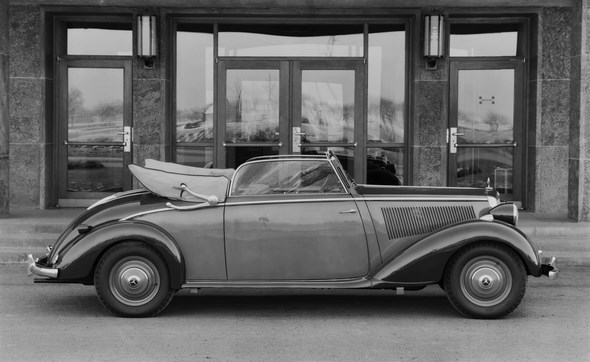 The body was also completely new: with the W 153, Daimler-Benz for the first time opted for the all-steel body, thereby parting company with the composite wood-and-metal method of construction. 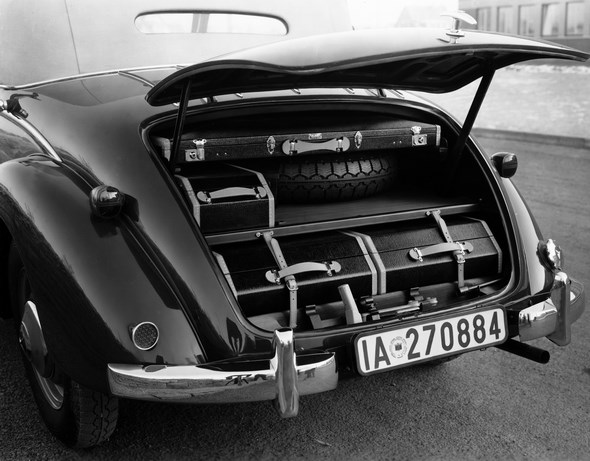 The body design of the new 230 highlighted a trend that had been planned for Daimler-Benz’s entire passenger car range, but which had been thwarted by the war. 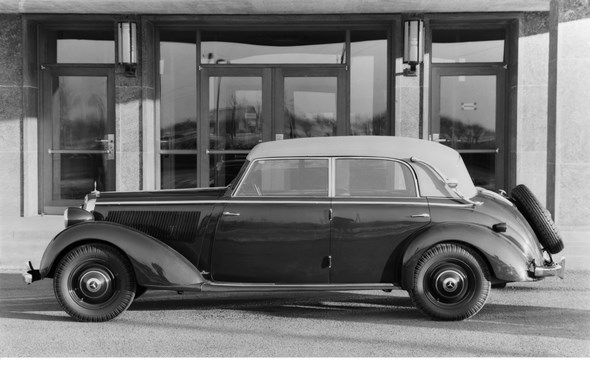 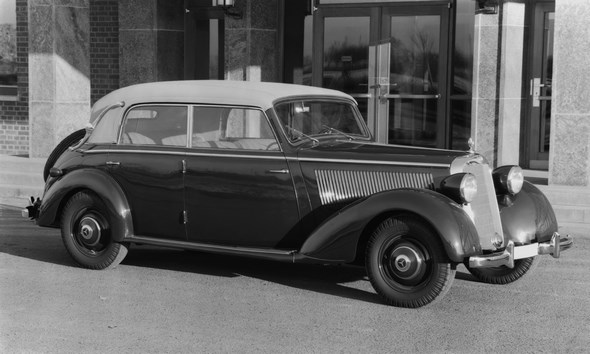 The same applied to the redesign of the instrument panel, which was now much more clearly laid out than in the predecessor.

The instruments were no longer in the centre, but positioned directly in front of the driver in his or her field of view. A cooling water remote thermometer was provided as standard. 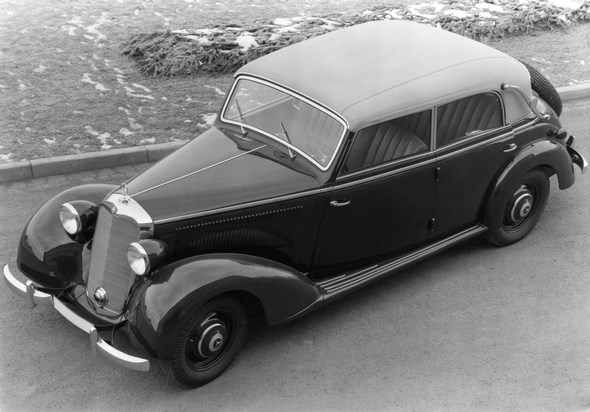 The optionally available radio was organically integrated into the centre of the dashboard, while there was a large closed glove compartment on the right-hand side. 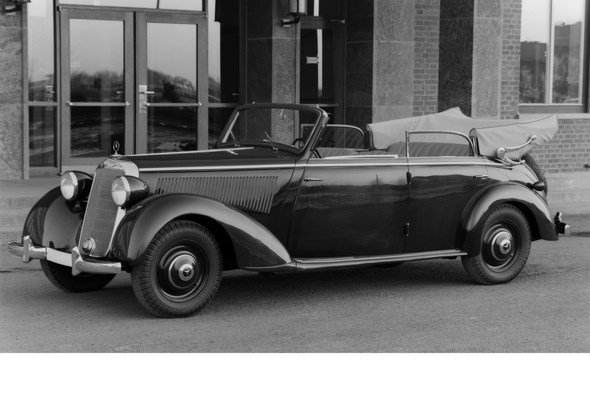 The introduction of the pistol-grip hand brake left more room in the front footwell. 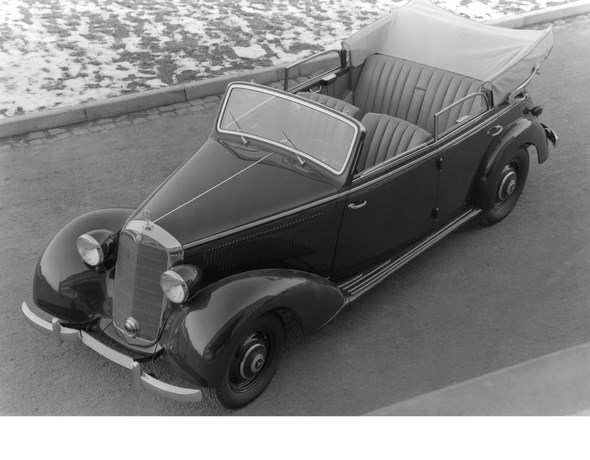 The new body generally offered more space in terms of both width and height. The Sindelfingen body designers had gone to great pains to ensure adequate ventilation. 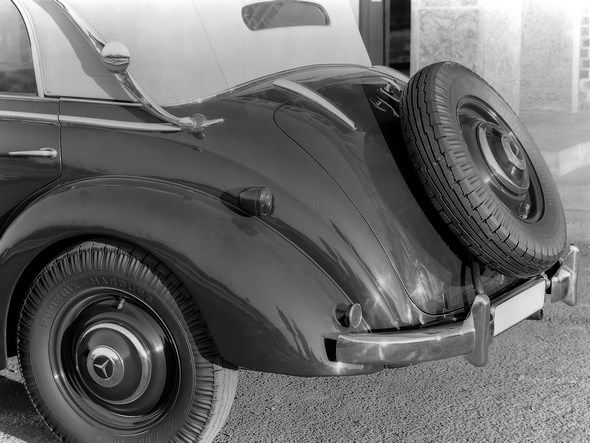 Two adjustable air flaps allowed fresh air to enter the ventilation box, which was mounted outside in front of the windscreen, from where the air flowed without draught through air vents underneath the windscreen into the vehicle interior. 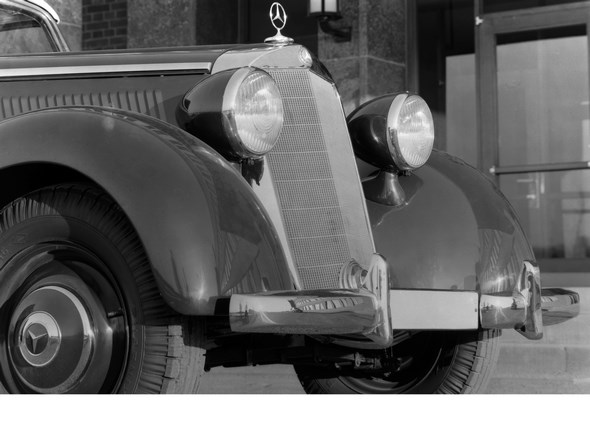 Rear pop-out windows ensured efficient ventilation. A heater was available for an extra RM 110. The W 153 was the first Mercedes-Benz to feature an alligator hood that could be opened from the inside.

The rear-mounted fuel tank had a capacity of 52 litres, 2 litres more than in the previous model. 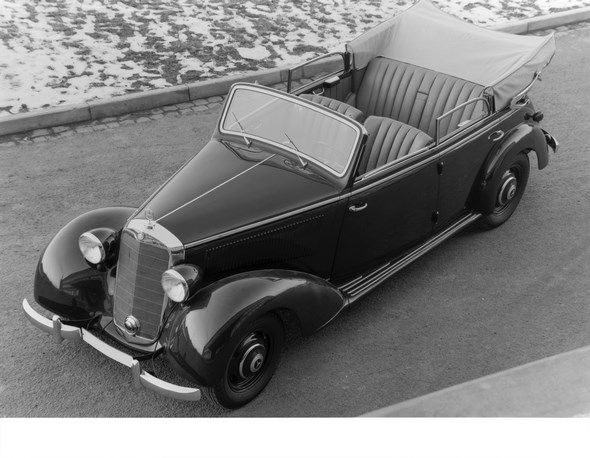 On the saloon, the antenna was in the centre of the roof above the windscreen and could be erected from inside. The convertibles had a ribbon antenna sewn into the soft top.

Also for the W 153, the choice of bodies was extensive. The range comprised the four-door saloon, optionally with sliding roof, and the Convertibles A, B and D.

The open-top two- and four-door models, especially the Convertible A, are today out-and-out rarities. 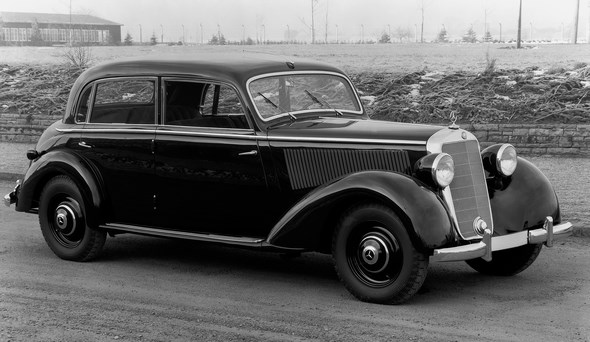 Between February 1938 and April 1942, 4176 units of the W 153 were produced at the plant in Untertürkheim. The vehicles recorded in the statistics for 1938, totalling 40 units, were in some cases experimental vehicles and in other cases roadsters and saloons for use in off-road motor sports. 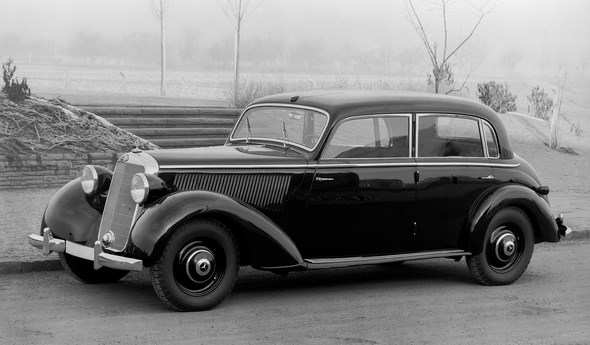 One year after series production had come to an end, manufacture of the W 153 was resumed. Between April 1943 and February 1944, 34 units of a newly developed version for generator gas operation were produced. 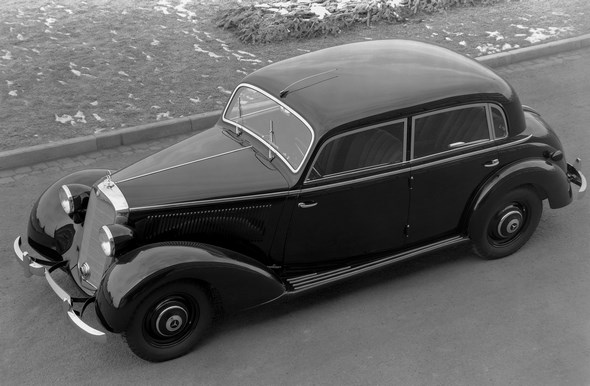 However, these so-called “wood gasifiers” were not equipped with the 2.3‑litre M 153 engine, but were powered by a special version of the M 159. 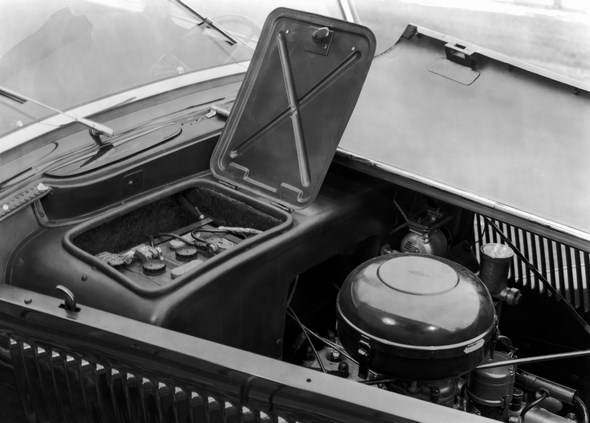 Originally conceived for the 2.6‑litre passenger car W 159, the launch of which was thwarted by the war, the M 159 was nevertheless produced in large numbers for use in Kübelwagen and fire-fighting vehicles based on the 1.5‑tonne L 1500 truck. 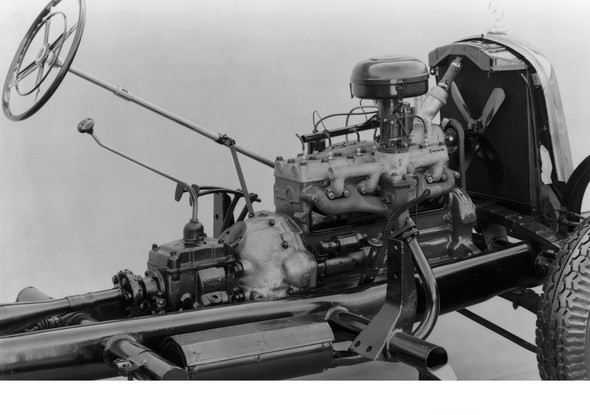 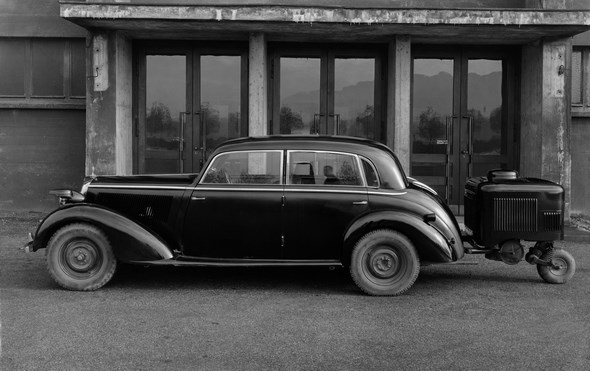 Great rarity value was enjoyed by the competition vehicles based on the W 153. These were two-seater open sports cars with in-house designations 230 SV and 230 S. The 2700 mm wheelbase was the same as in for the short 230 N version of 1937. 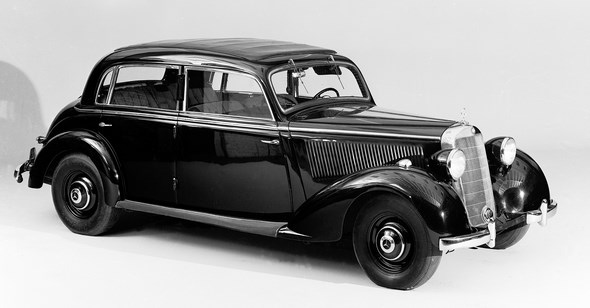 Bodies of magnesium alloy and wings of sheet aluminium made them extremely light. They were successfully used in 1938 and 1939 in the then highly popular off-road events. 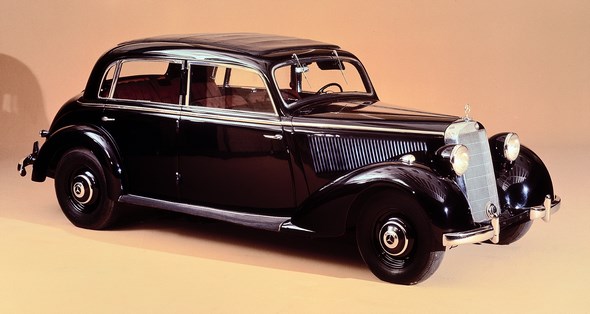 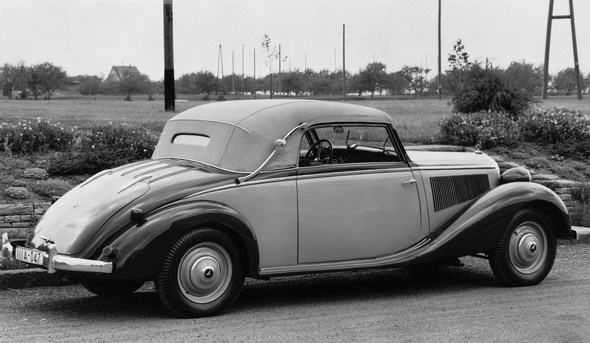 Both engine variants had a higher compression than in the respective standard-production units and also a slightly higher power output of 58 hp.