In September 1972 a totally new car generation of the upper class was presented to the public.

For the first time the name “Mercedes-Benz S-Class” was officially used. 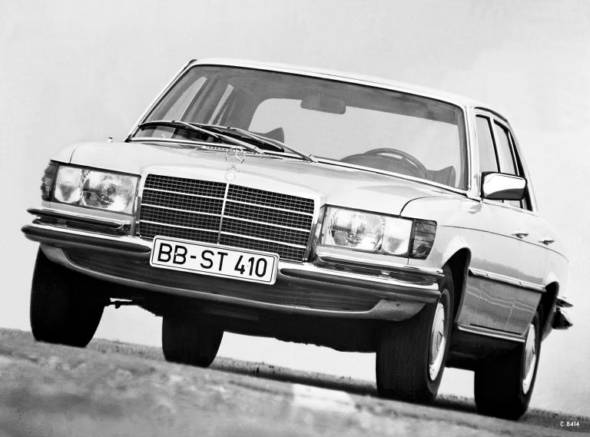 Six months later the S-Class sedan was also available with a larger displacement capacity in the 4.5-liter V8-engine, parallel to the 450 SL and the 450 SLC.

At the same time Type 450 SEL was launched with a wheelbase extended by 100 mm.

As with its predecessors the rear passengers thus benefitted from the newly gained leg room. 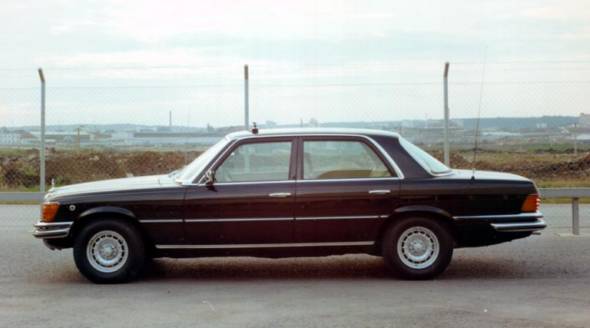 A remarkable technical novelty in the sedans of type range 116 was the double-wishbone front wheel suspension with zero steering-offset and brake dive support.

It improved the handling characteristics of the car considerably.

The rear wheel suspension corresponded for the most part to the construction which had proved itself for years in the “dash-eight” models and was also used in the 350 SL.

In terms of passive safety the S-Class also outlined the latest technological development. 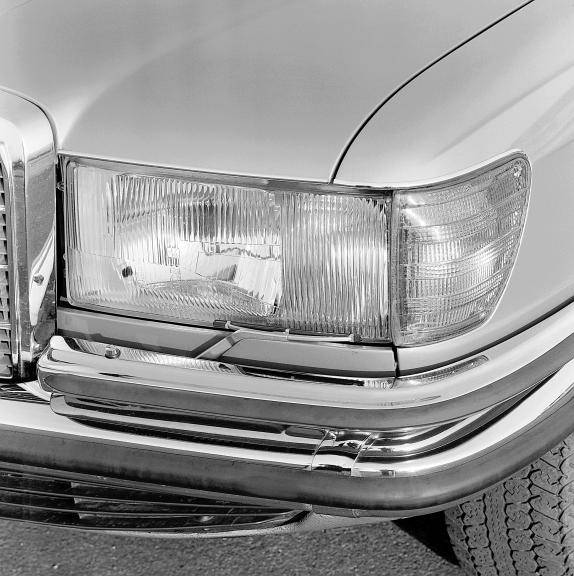 The many construction details realised in the 350 SL for the first time and for safety reasons now, of course, were transferred as a whole to the S-Class sedans.

Thus the fuel tank was not located in the rear end of the car anymore, but above the rear axle and thus protected against collision.

Inside a heavily padded dashboard, deformable or conceiling switches and controls as well as a new four-spoke security wheel with impact absorber and broad impact cushion provided for utmost crash protection. 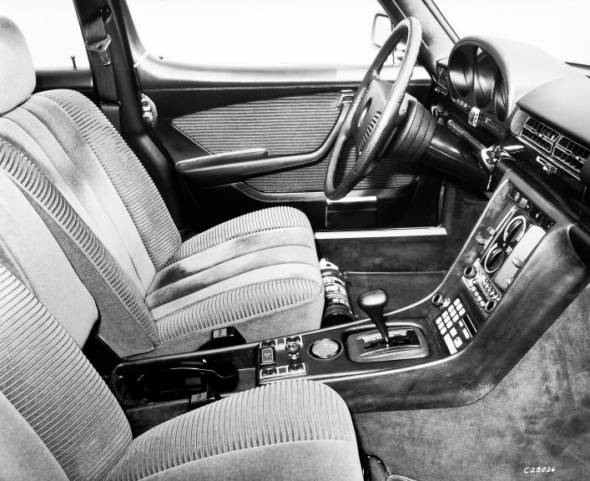 Important improvements in comparison to the preceding model range was the even more stable safety passenger cell with stiffened roof-frame structure, high-strength roof and door pillars as well as reinforced doors.

Newly developed cowl panels at the A-pillars, serving as water-shield gutters, guaranteed good visibility in rain and kept the side windows clean in bad weather.

Further safety details were wide wraparound direction indicators, well visible also from the side. In addition, broad rear lamps with ribbed surface profile proved to be very insusceptible to dirt. 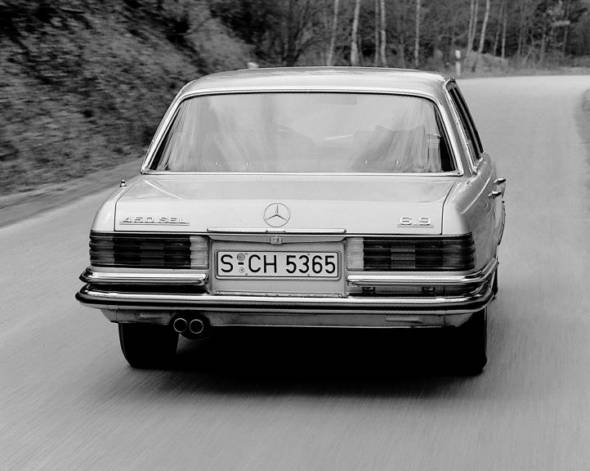 For the first time in a Mercedes-Benz car a hydropneumatic suspension with level control system guaranteed highest driving comfort.

As its direct predecessor, the 450 SEL 6.9 was an immediate and full success. 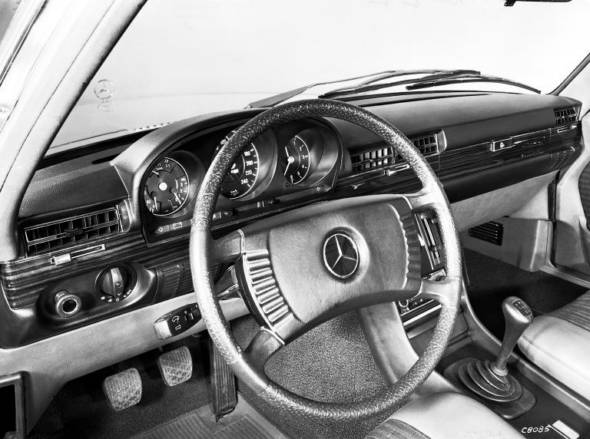 Even though it was more than twice as expensive than the 350 SE, as many as 7,380 cars were built within its production time of four years and six months.

Between November 1975 and February 1976 the fuel injection system of the 2.8-liter, 3.5-liter and 4.5-liter injection-engines was changed in order to correspond to the now higher exhaust-emission standards in most European countries.

In all three cases the conversion was connected to slight power reductions. In the 2.8-liter engine as well as in the 3.5-liter engine the compression was lowered at the same time.

In order to facilitate maintenance both V8-engines were equipped with a breakerless transistor ignition and a hydraulic valve-clearance compensation.

Parallel to the 2.8-liter injection engine the compression was also lowered in the carburettor engine. Here, too, this led to a reduced potential of performance.

Two years later, since April 1978, the original performance of all three models with injection engine was reached again.

With the 2.8-liter injection engine – in contrast to the carburettor engine – the compression was increased to its old value.

With the two V8-models the former performance was basically achieved by changing the exhaust-emission system. In May 1978 the 116 series model range was once more extended. 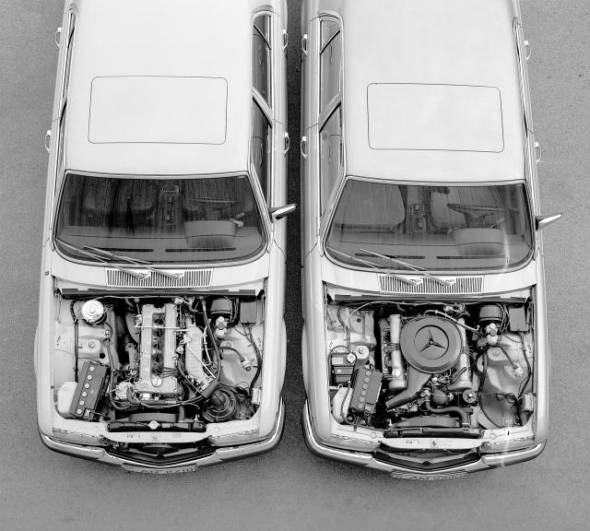 The new S-Class model, however, was at the other end of the performance scale and – for the first time in the history of this vehicle category – was driven by a Diesel engine.

The 3.0-liter 5-cylinder aggregate which had proven so well in the Types 240 D 3.0 and 300 D was now provided with a turbocharger.

This made it possible to increase the performance to 115 hp. The development of this unusual S-Class variant, which was exclusively available in the USA and Canada, had been started with the goal to fulfil the lower consumption figures newly introduced by the US government.

The important figure was the so-called “corporate average fuel economy”, an invention of the Carter-administration, which designated the average consumption of all car-models made available by a manufacturer. 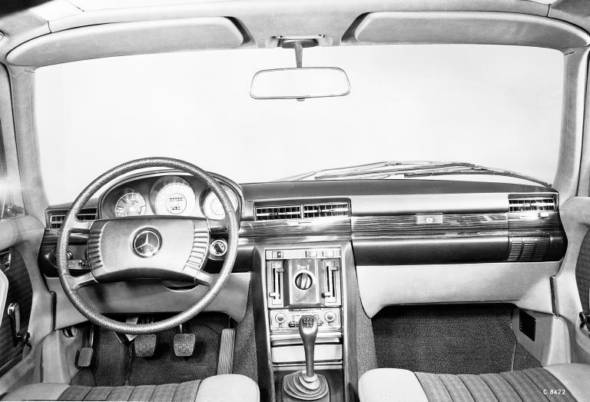 With an extended offer of traditionally economical Diesel models the fleet consumption could be lowered under the legal limit.

A technical innovation of trend-setting importance was available since autumn 1978, world exclusively in the 116 series S-Class models: the antilock system (ALS) which had been developed together with the Robert Bosch GmbH.

It guarantees the unrestricted controllability of the vehicle even when slamming on the brakes, thus contributing considerably to active safety.

Today it is almost self-evident and also available in small cars. In those days, however, the market introduction of the ALS was a real sensation.

Safety of a different kind was offered by the special protection versions of the 116 series models.

Based on the experience gained by the development of the special protection 280 SEL 3.5, the protection technology could be further improved. 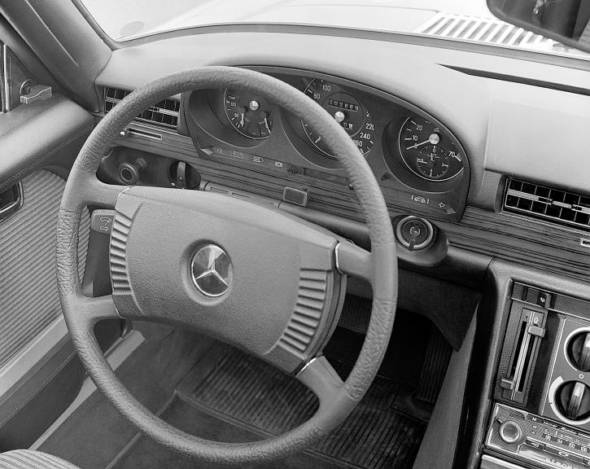 Altogether 292 security cars were produced of the 8-cylinder models 350 SE, 350 SEL, 450 SE and 450 SEL and delivered to selected clients, among them many authorities in Europe and overseas.

The production of model series 116, however, was not finished yet. It ceased only between April and September 1980, depending on the model.

The last car of a total of 473,035 built units of this range that passed the final-assembly inspection at the plant in Sindelfingen was a 300 SD.