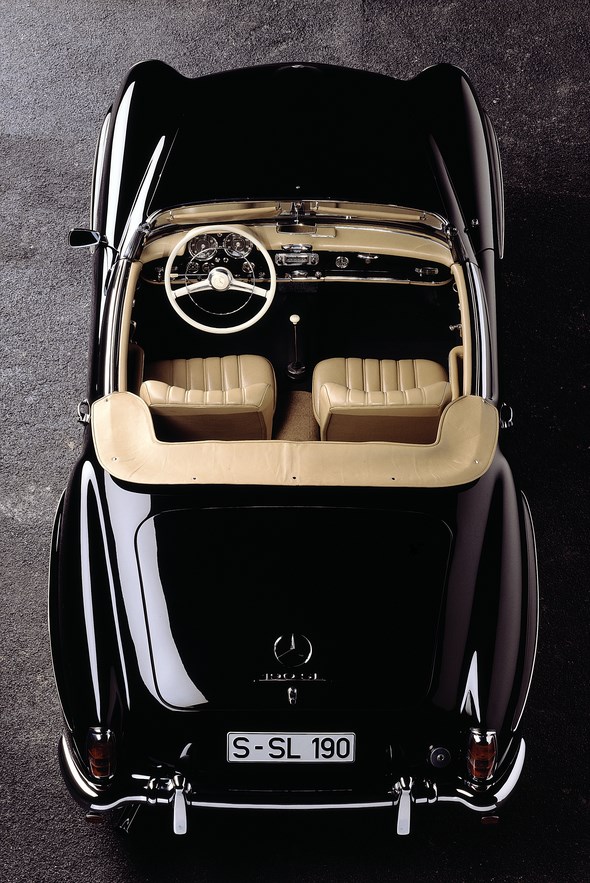 In a way that resembled the construction of the 300 SL model, which had been put together from existing structural components, another sports-type car was developed on the basis of the 180 model. 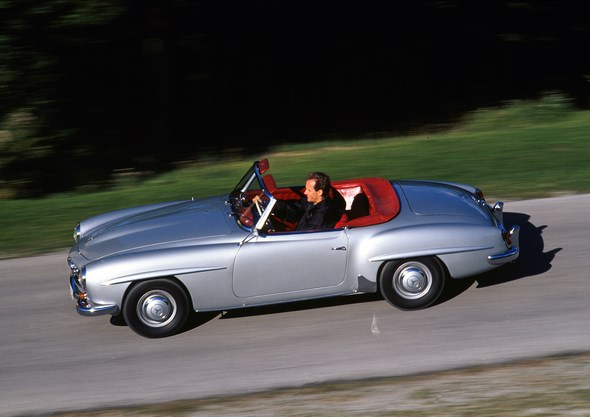 In contrast to the famous wing-door coupé, the roadster 190 SL was not designed to be a true sports car, but an elegant and sporty two-seated GT car. 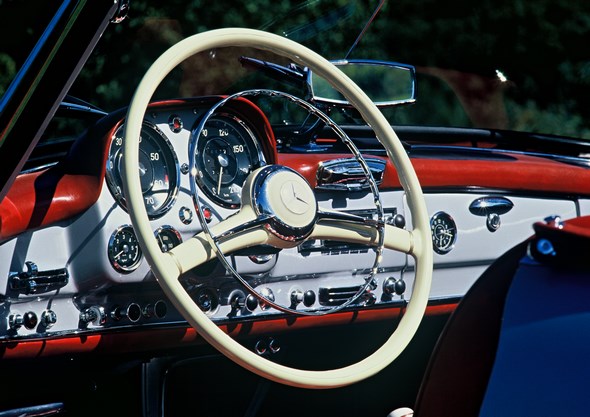 The body, designed by Karl Wilfert and Walter Häcker had stylistically been derived from that of its older brother. The shortened framework of the 180 model served as chassis; a sophisticated space frame like that of the 300 SL was not required, because of its less extreme driving performance. 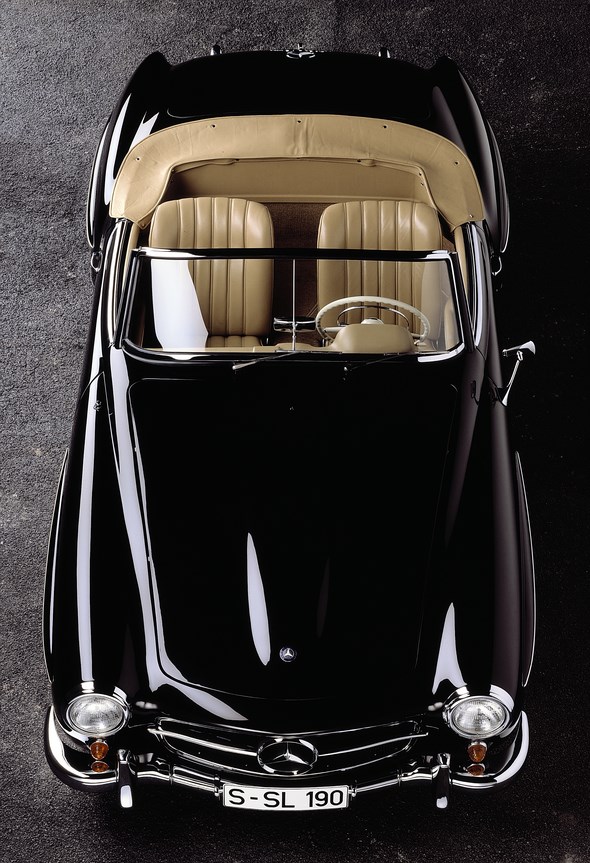 The single joint cross shaft axle of the 220 a model ensured a high standard of driving safety, a fact that met with much praise among the press and motoring public.

Front axle suspension including the sub-frame concept had been taken over from the 180 / 180 D Types. The 190 SL was powered by a new 1.9-liter four-cylinder unit with overhead camshaft which spawned a whole engine family and was also incorporated in derated form into the pontoon-type saloon 190. 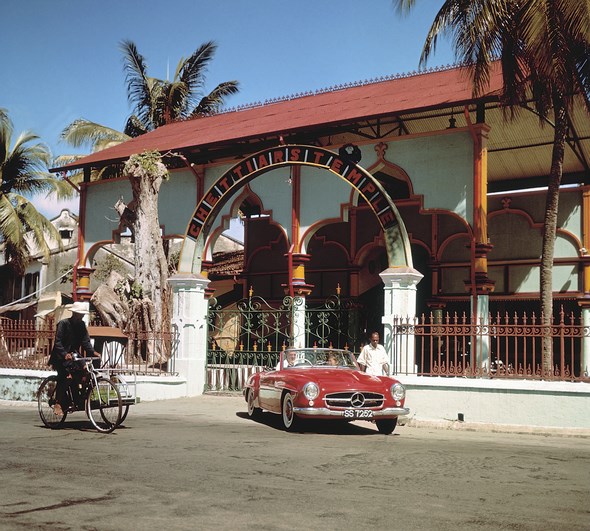 As in the saloons 180 D – 220 a, the engine rested on the sub-frame only at its front; from January 1956, however, a modified sub-frame was used, which featured two additional supports for the engine and, in slightly modified form, was also built into the new Types 190 und 220 S. 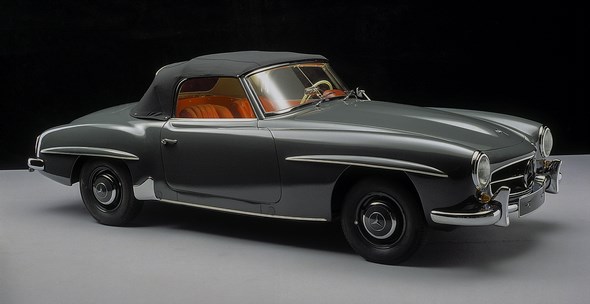 The 190 SL was presented to the public eye together with the 300 SL at the “International Motor Sports Show”, which took place in February 1954 in New York. 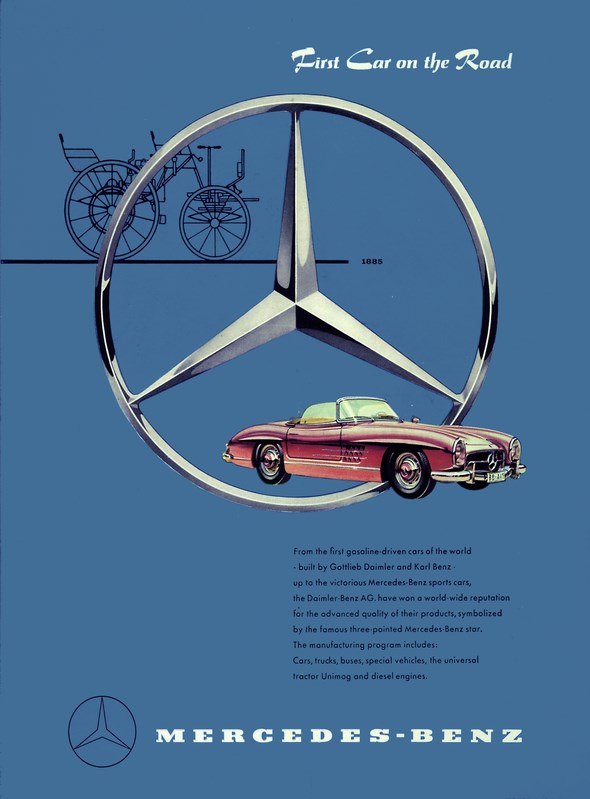 While the 300 SL was almost ready for serial production, the 190 SL model was still a prototype, which had neither been tested technically, nor was it stylistically refined to an adequate level.

Both aspects had been carefully revised, so that serial production did not start until January 1995 (preseries) and May 1995 (main series) respectively. 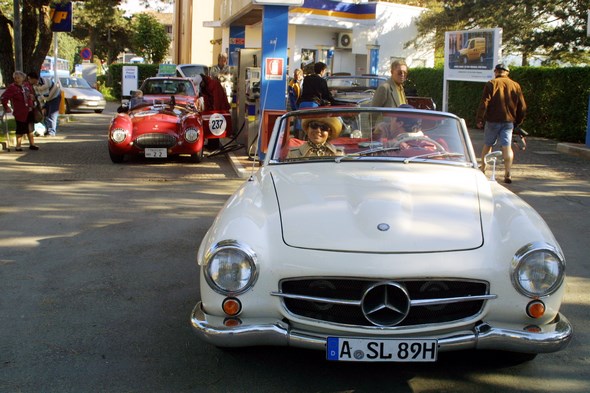 The final version was presented at the Geneva Motor Show in March 1955 for the first time with marked changes to its exterior: The most significant change was that the model now came without the stylised air inlet device on the bonnet. There were lancets above the rear wheel arches as well as modified bumpers and indicators or reflector lights. 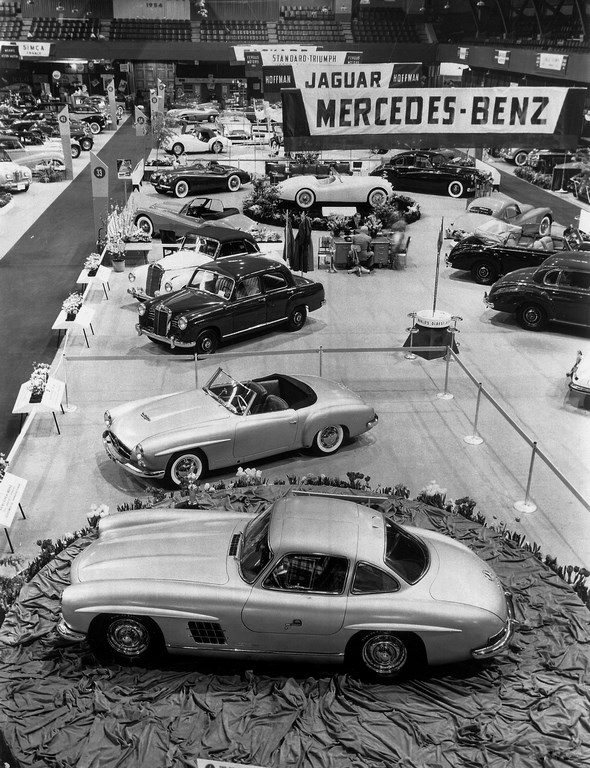 The 190 SL came in trhee different version: as roadster with a hood, but without a hardtop, as a coupé with removable hardtop, optionally with or without a hood. 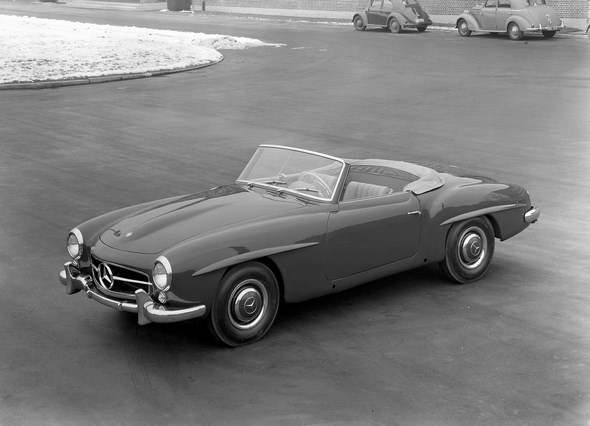 Another version, which was presented in the first brochures, a 190 SL with more pronounced sports-car characteristics with light-metal sports-car doors and a small plexiglass wind screen was no longer advertised after spring 1956. 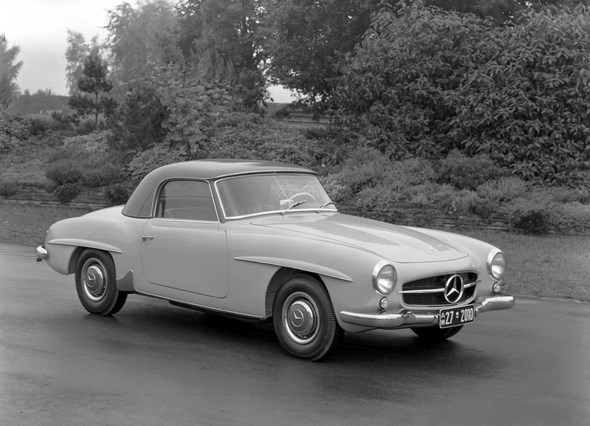 A car with the sports-type accessories mentioned above, would have been rated as a serial sports car in competitions and would have had absolutely no chance. 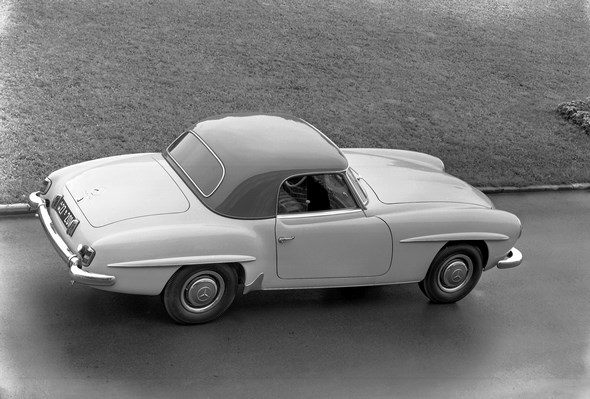 Because of the decision of FIA that a Gran Turismo, too, had to have a roof which could be closed completely, a condition, which the revised version of the SL clearly would not have fulfilled, a rating as a GT-car was out of the question. 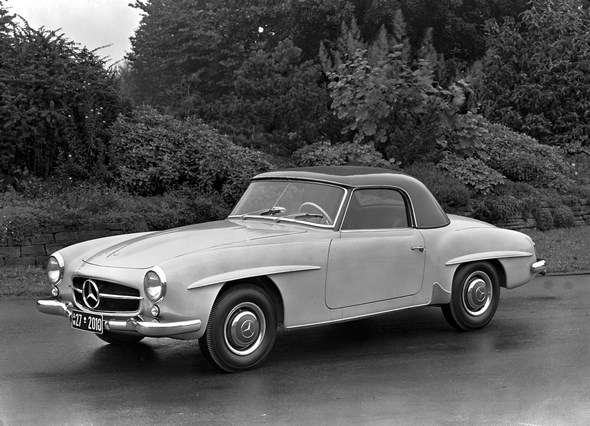 Of the numerous improvements in detail, which were untertaken on the 190 SL during its time of production, some can be clearly distinguished from outside: In March 1956 broad chrome trims were fixed to the upper door rim and in June of the same year the 190 SL was fitted with the bigger taillights of the 220 a, 219 and 220 S models. In July 1957, illumination of the rear number plates was transferred to the bumper guards, so that the new broader number plates could be mounted easily. 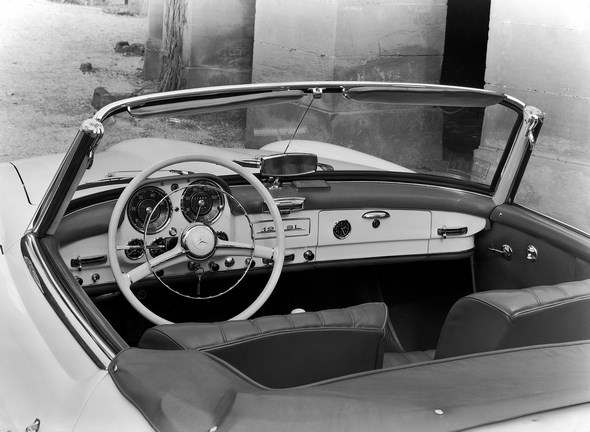 Thus the rear bumper guards, which before had been serially fitted on the US-models only, now became part of the basic equipment but were at the front bumpers still only available at an extra cost. 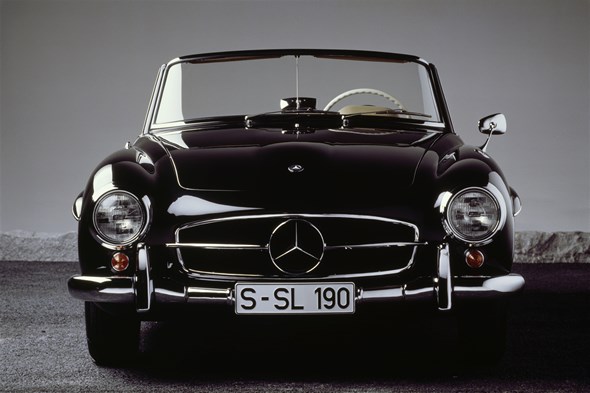 From October 1959 the coupés were equipped with a new hardtop with enlarged rear window, guaranteeing much better vision. 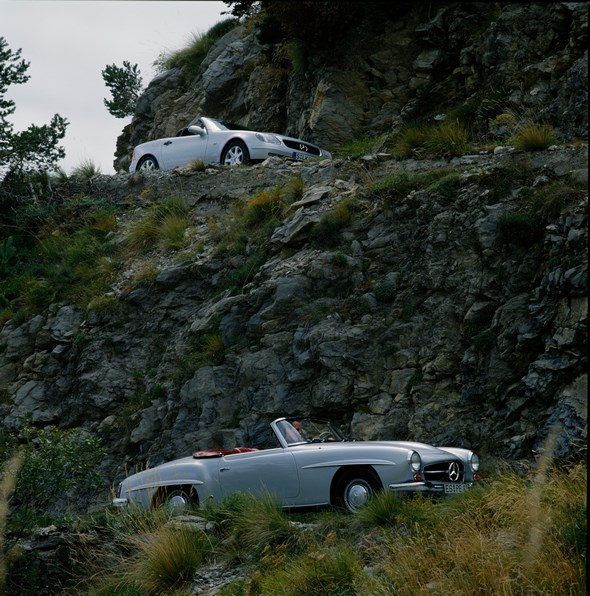 Last but not least, the boot lid lock was changed in 1960; at the same time, the bow-type handle was replaced by a recessed door handle, which was also attached to the 180 Db – 190 b models. 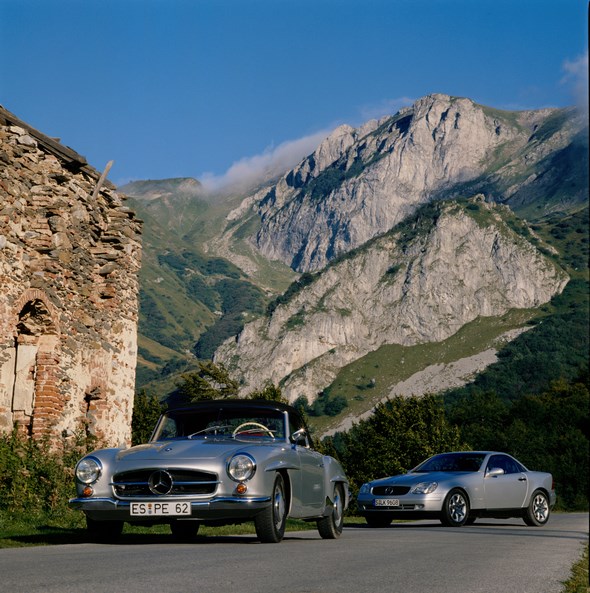 Production numbers demonstrate, how successful the 190 SL really was in its time: Between May 1955 and February 1963, as much as 25,881 cars were built in Sindelfingen, the majority of which were destined for the US market. 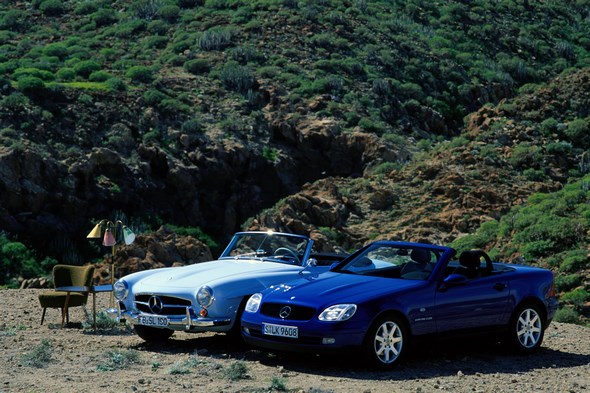 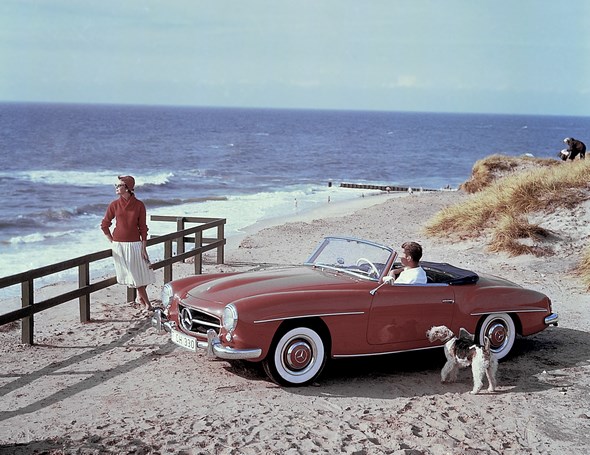 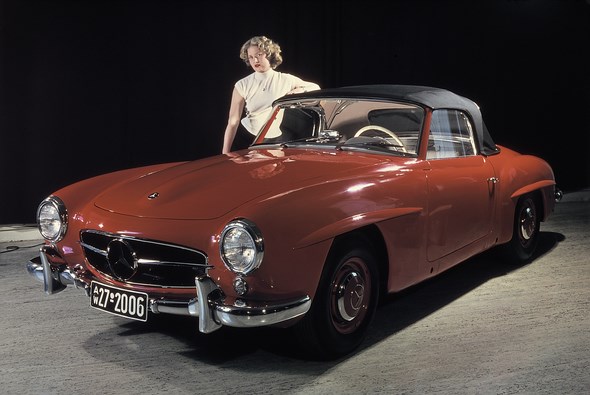