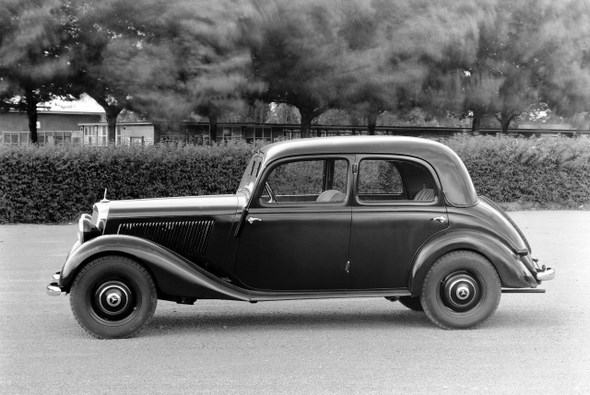 In February 1936, the International Motor and Motorcycle Show in Berlin was dominated by the theme 50 Years of Automotive Engineering”.

As was to be expected, Daimler-Benz was present at the historic anniversary show with a host of exhibits in the hall of fame. Not only that, with the 170 V, 170 H and 260 D, it also unveiled three new passenger car models. 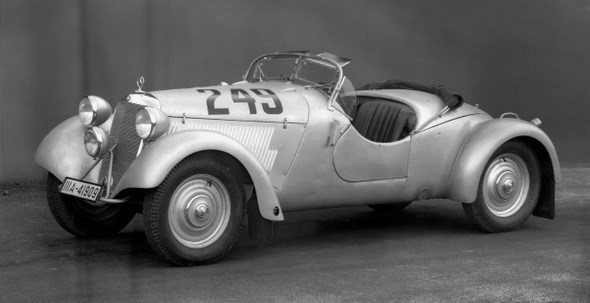 Two of those models, the 260 D and especially the 170 V, were destined to assume special significance in terms of the product history of the Mercedes-Benz brand.

Development of the 170 V, which had been given the in-house code W 136, had begun as early as 1933 under the direction of chief design engineer Dr Hans Nibel and designer Max Wagner. 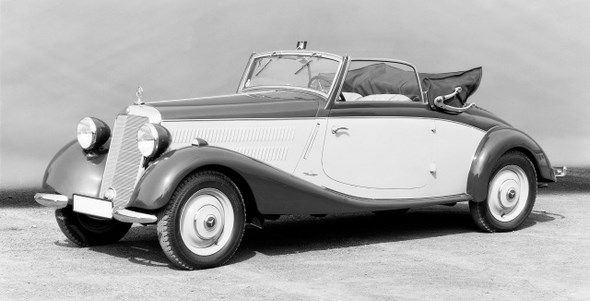 The aim was to develop a mid-sized car that was lower-priced and even more groundbreaking than the six-cylinder 170 (W 15) had been at its launch in 1931.

The “V” in the model designation indicated that the engine was at the front. Used for the first time in the nomenclature system, this identification letter was necessary in order to distinguish the new 1.7‑litre model not only from its predecessor, the 170, but also from its rear-engined counterpart, the 170 H. 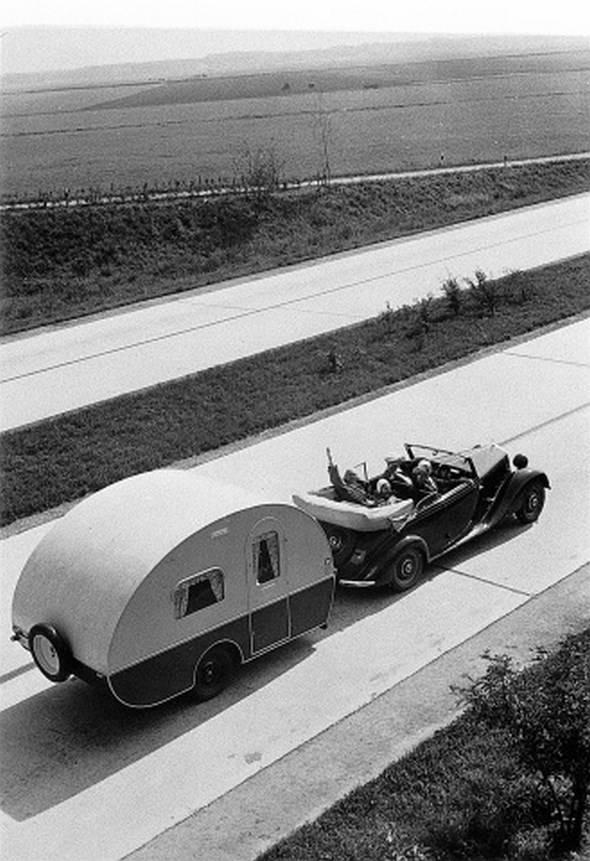 The backbone of the new vehicle was an X-shaped oval tubular frame designed according to a patent of Max Wagner.

Despite a longer wheelbase, this new frame was some 50 kg lighter and also stiffer than the box-section frame previously used in the 170. 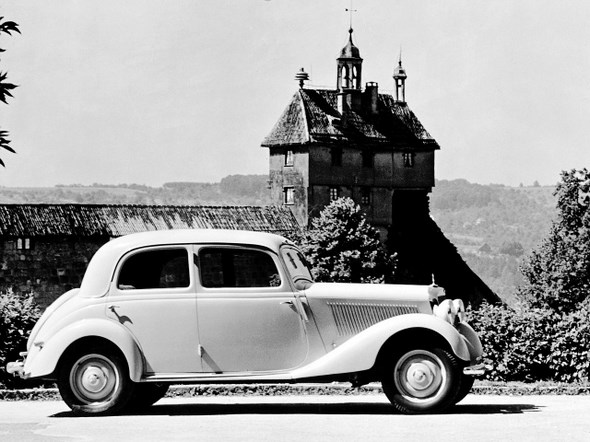 The frame of the 170 V was sufficiently rugged to easily cope with the tough service environment as a Kübelwagen or panel van, where heavy loads werewas the order of the day.

The front fork of the frame housed the engine, while the differential was accommodated in the rear fork. The front wheel suspension consisted of independently suspended front wheels mounted on two transverse leaf spring packages. 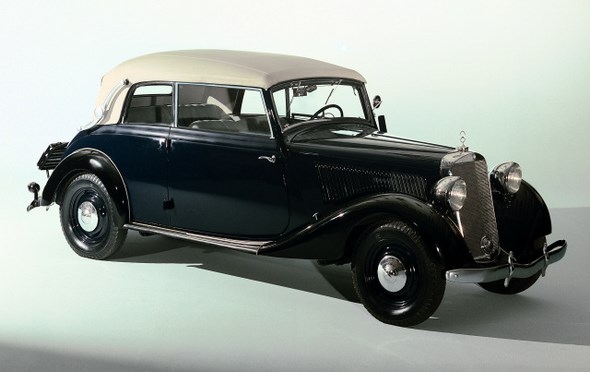 Damping was by means of two piston-type shock absorbers. The 170 V boasted a rear swing axle with coil springs.

The engine M 136 had been developed from the 1.3‑litre unit in the rear-engined 130. It was initially intended to have a 1.6-litre displacement, a version that actually underwent extensive testing. 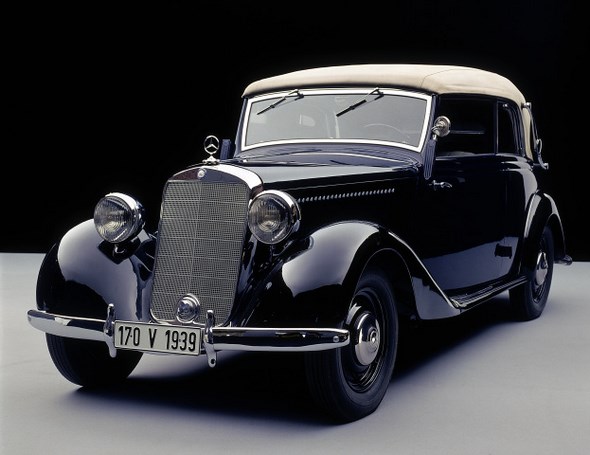 Just as production was about to commence, it was decided to increase the displacement to 1.7 litres by adding 1.5 mm to the bore while lengthening the stroke by 2 mm.

Instead of raising the power output, the main aim was to produce greater torque. So as not to suffer any loss of refinement in comparison with its six-cylinder predecessor, the four-cylinder engine in the 170 V was mounted at two points according to the floating-engine principle, with the vibration axis passing through the centre of mass. 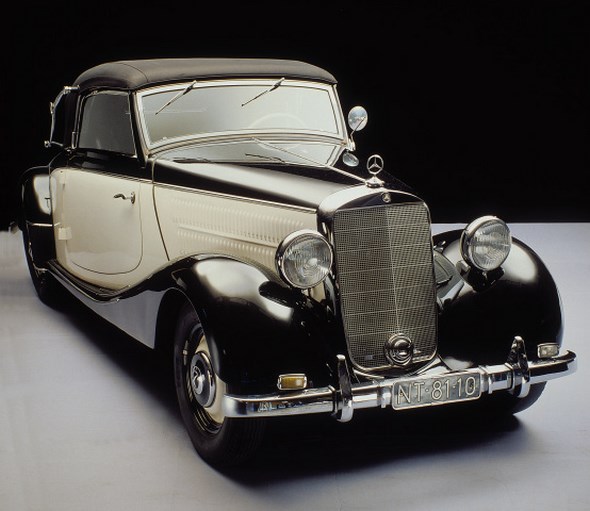 Originating in the USA, this “Floating Power System” dated back to a Chrysler patent.

Delivering 38 hp with its standing valves and updraft carburettor, this was not exactly a sporty engine. Nevertheless, it proved its worth as a reliable everyday engine that was praised at the time for its refinement.

Although never originally intended for such an area of application, even in extremely tough wartime service powering the 170 VK Kübelwagen, this engine lost nothing of its proverbial ease of maintenance, reliability and durability. 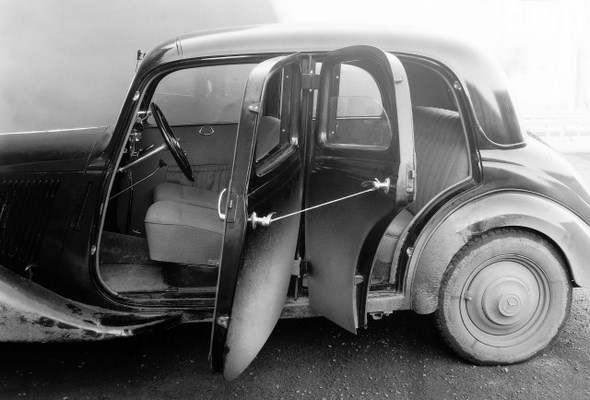 At its launch in March 1936, the 170 V was available in a wealth of body variants scarcely imaginable today. The range comprised: two- or four-door saloon, convertible saloon, two-door open tourer, Convertible B and two-seater roadster.

As usual, a chassis-only version was additionally available for third-party coachwork or a special-purpose body. Already in May, the line-up was augmented by the sporty-elegant Convertible A, which, at a price of RM 5 980, became the most exclusive variant of the 170 V. 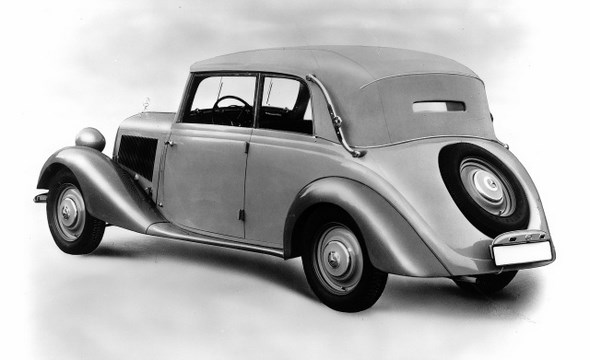 September brought the addition of a panel van, which came with wider 5.50 x 16 rims and tyres.

At the International Motor and Motorcycle Show, the 170 V was still on display without a rear bumper. From July, all variants were delivered with rear corner guards. 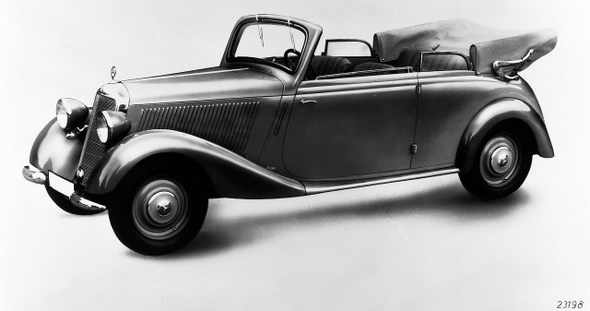 At the same time, the roadster and Convertible A were provided as standard with front wing lamps. An unusual feature of the 170 V in its first model year was that the Mercedes star was mounted directly on the radiator grille on a stylishly shaped pedestal.

The otherwise customary mounting of the star on the unscrewable radiator cap had been abandoned in favour of banishing the cooling water filler hole to underneath the bonnet. 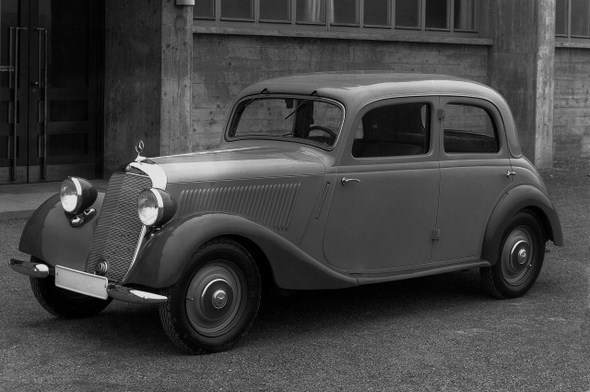 This was to change in February 1937, when the design familiar in other models was copied to the 170 V. There was also a minor modification to the radiator itself: instead of sloping outwards, the trim strips between the radiator cores were now perfectly horizontal.

On the Convertible B, a modified design of the soft top made it possible to dispense with the thin metal pillar between the front and rear side windows. 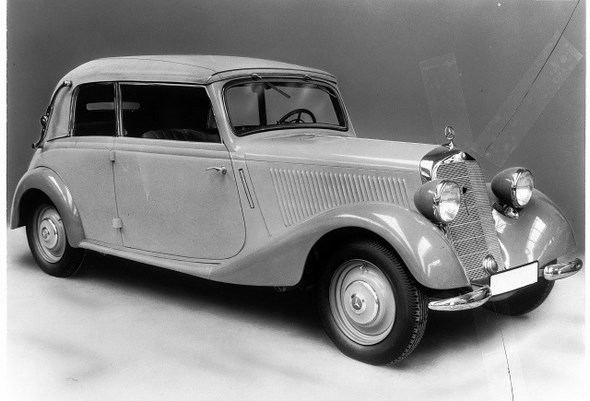 In February 1938, the 170 V was provided as standard with automatic intake manifold heating and valve seat rings for the exhaust valves.

One year later, additional changes took effect as part of the continuous programme of model refinement. The innovations included a bypass thermostat to allow faster heating of the cooling water as well as improvements to both air filter and intake noise silencer. 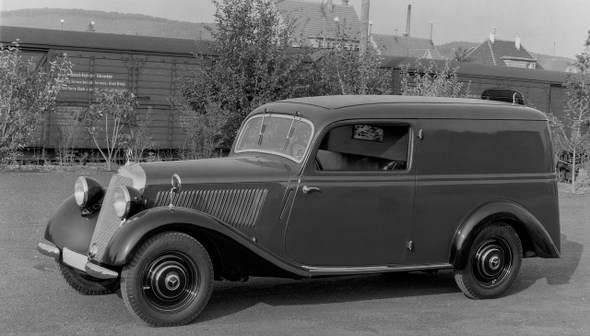 Also, the capacity of the fuel tank in the engine compartment was increased from 33 to 43 litres, this causing the cross-section of the tank to change from round to elliptical.

In early 1940, having previously had synchromesh only on third and fourth gears, the 170 V was given an all-synchromesh four-speed transmission. 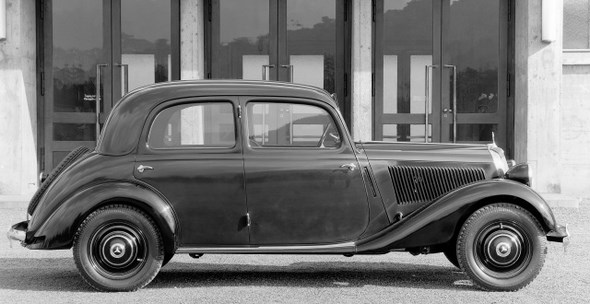 From the first pilot series vehicle in July 1935 to the final exemplar in November 1942, production of the passenger car variant of the 170 V totalled 71,973 units – simply unimaginable for a pre-war Mercedes-Benz passenger car.

There were also 989 units of the panel van. In terms of units produced, the 170 V headed the list of Mercedes-Benz passenger cars by a long way. 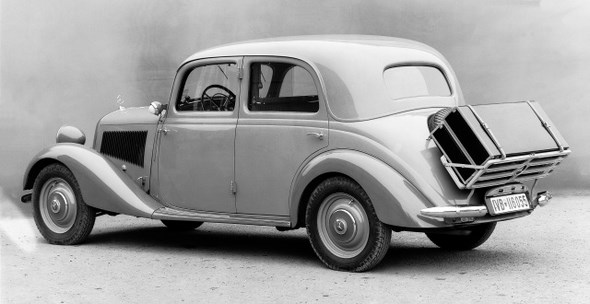 Soon after its launch in March 1936, the new four-cylinder model had reached a monthly production of 1 900 vehicles – a volume few would have associated with the Mercedes-Benz brand just a short time before.

Although, as the entry-level model of the Mercedes-Benz passenger car range, the 170 V offered only limited performance potential, it served as the basis for a series of competition vehicles. 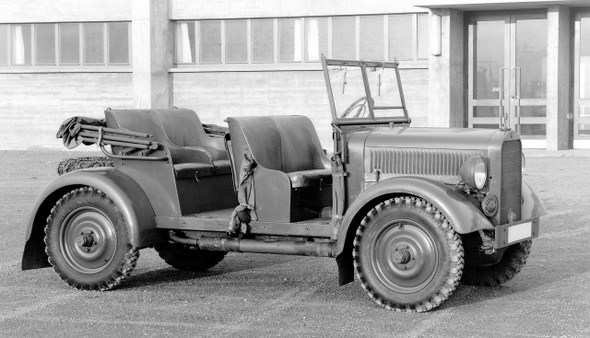 In the 1936 and 1937 seasons, the Daimler-Benz entry at off-road motor sport events was a sports roadster not so dissimilar to the standard production vehicle.

Bearing the in-house designation 170 VR, it differed from the commercially available roadster mainly through its larger wheels, stronger springs and adapted gear ratios. 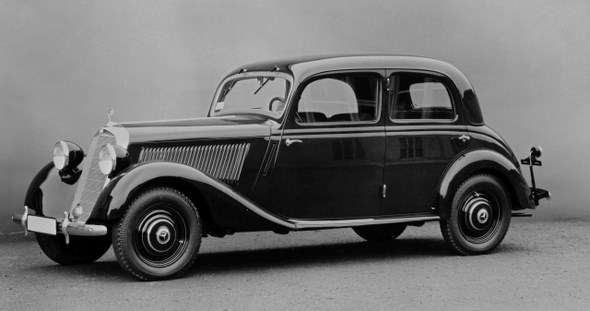 During vehicle winter testing in February 1938, at the very start of the new season, Daimler-Benz unveiled the 170 VS, a newly developed two-seater off-road sports model with a host of modifications compared with its predecessor. 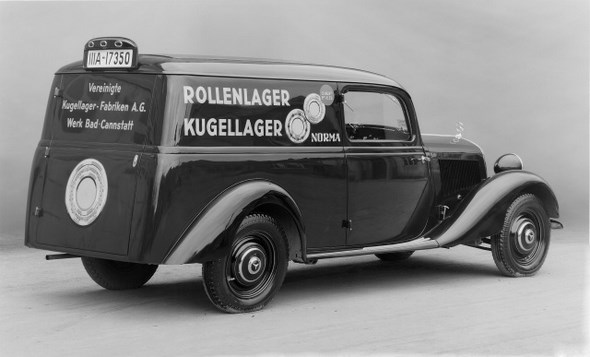 The sports engine with design code M 149 had cylinder dimensions of 80 x 95 mm and thus a shorter stroke and wider bore than the underlying 1.7‑litre unit.

It produced a power output of 50 hp, with a dual-carburettor version delivering as much as 60 hp. 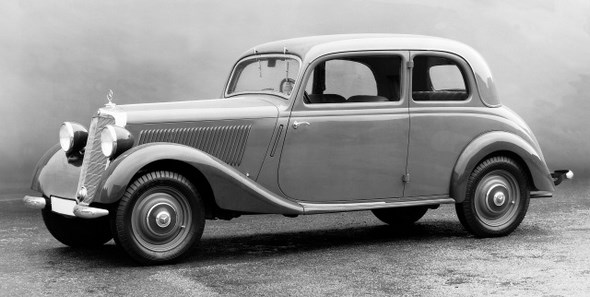 The 170 VS provided the basis for two further off-road sports cars with the codes 170 SV and 200 V. Both vehicles were powered by a rebored 2.0-litre variant of the M 149, the single-carburettor version producing 53 hp, while its dual-carburettor counterpart delivered 64 hp.

In addition to its higher displacement and increased power output, the 170 SV sported a reinforced suspension and off-road tyres. The off-road sports cars based on the 170 V posted a string of victories between 1937 and 1939.

All versions combined reached an aggregate production volume of around 30 vehicles.

Two further variants of the 170 V that were not included in the price list were the Kübelwagen for the police and the Wehrmacht.

Produced between summer 1936 and summer 1938, the police version was fitted with side running boards like the normal passenger car model and was less military in appearance than the Wehrmacht version, which was built from November 1938 onwards in three body variants.

It speaks for the extremely solid construction of the 170 V that the Wehrmacht Kübelwagen, which was designed for a high load capacity, was broadly identical in technical terms to the standard-production model, with merely the electrical system being converted to 12 V.

The Wehrmacht Kübelwagen was built until September 1942 with a production totalling 19,075 units. 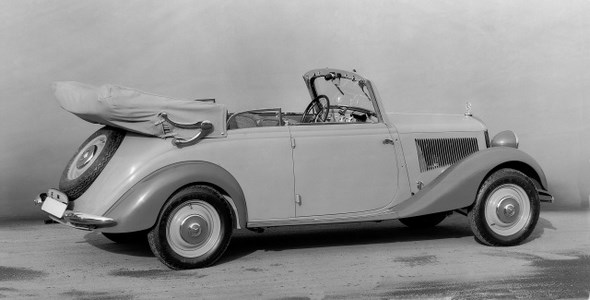 From 1939 there was a special version of the 170 V designed to address the growing shortage of petrol. This so-called “wood gasifier” version ran on generator gas, which was produced by carbonising wood in the built-on wood gas generator.

Despite its higher compression, the 170 V “wood gasifier” delivered only 22 hp, less than 60% of the power output of the standard petrol engine. 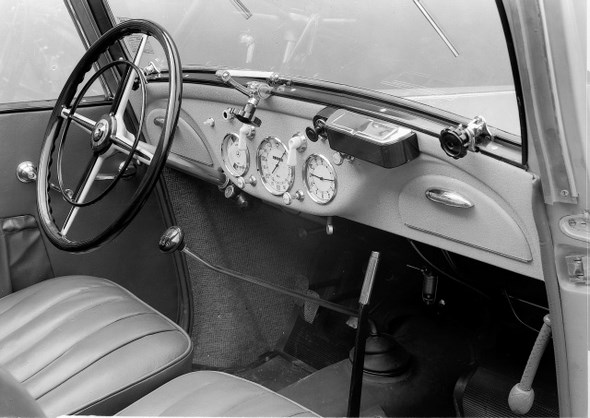 This ruled out the prospect of breathtaking performance, which in any case had never been the forte of the 170 V. Moreover, the generator system was bulky and cumbersome in use.

In spite of all these adversities, a wood gasifier ready for the road was better than a petrol-engined vehicle that had been brought to a standstill by a shortage of fuel.

Adding around RM 1000 to the price, the wood gas system was normally supplied for retrofitting to an existing vehicle.

As far as Daimler-Benz was concerned, the 170 V was by far its most important pre-war passenger car model, securing the Mercedes-Benz brand a top position in the mid-size segment.

The position is appositely summed up in the brochure of 1939: “The extent to which this new model […] meets the needs of the car market is demonstrated by the fact that the Mercedes-Benz 170 V has achieved sales figures hitherto unknown for a vehicle in its class.”

After the end of the war, the 170 V followed up its pre-war role by serving as the basis for the start of post-war production. 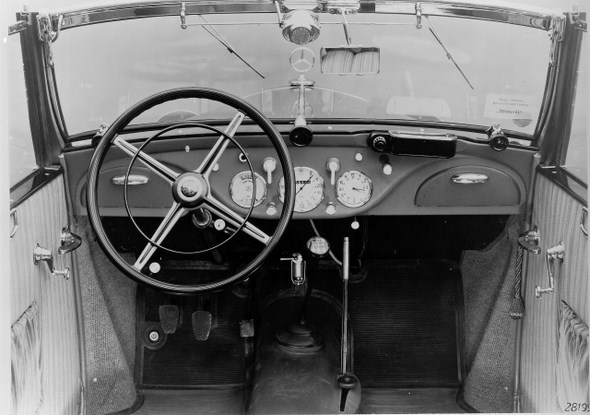 Until early 1949, it was the only passenger car model in the Mercedes-Benz sales programme, and the 170 model line-up, which was continuously expanded from 1949 onwards, formed the backbone of Daimler-Benz’s passenger car production until it was finally phased out in September 1955.