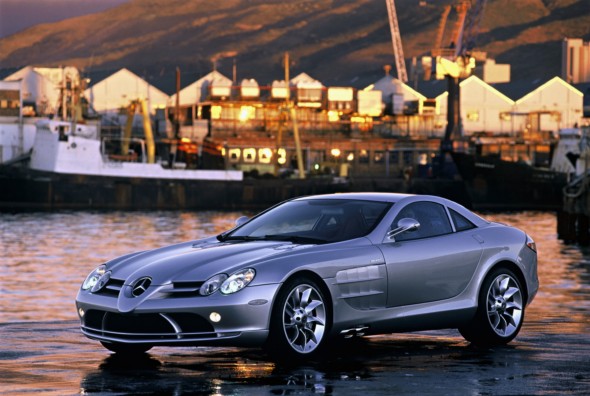 A Gran Turismo for the 21st century

The new Mercedes-Benz SLR McLaren is an impressive testament to the competence and experience of Mercedes-Benz and our Formula 1 partner McLaren in the development and production of high-performance sports cars.

The two-seater, with its striking swing-wing doors and styling elements borrowed from the Formula 1 Silver Arrows, builds on the legacy of the famous SLR race cars of the 1950s. 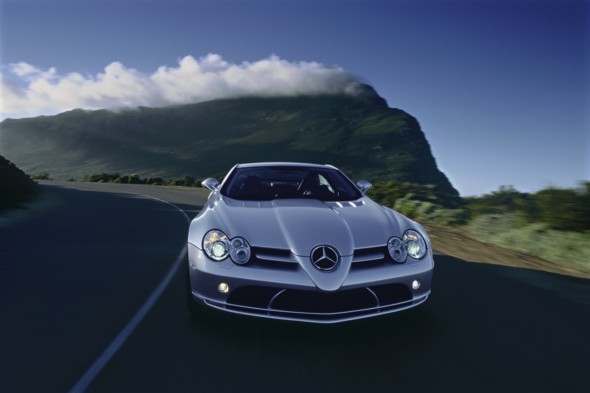 Equipped with cutting-edge race car technology and groundbreaking new Mercedes developments, designed to ensure a high standard of safety and suitability for day-to-day use, the new SLR creates a distinctive image for itself as a 21st-century Gran Turismo – a thrilling synthesis of tradition and innovation. 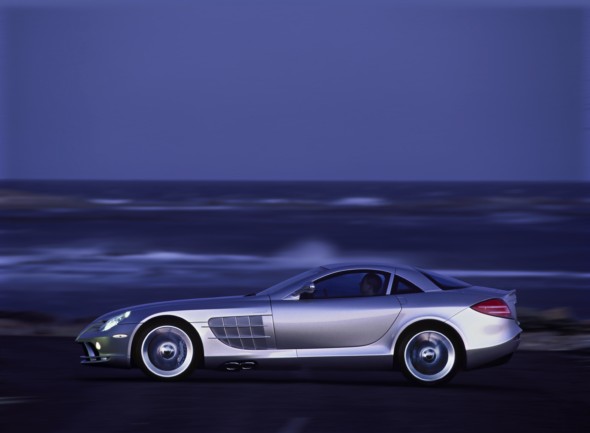 The newly developed V8 supercharged engine delivers an output of 460 kW/626 hp and accelerates the sports car from 0 to 100 km/h in 3.8 seconds.

The top speed is approximately 334 km/h. The body of the new SLR, like those of the Mercedes-McLaren Formula 1 race cars, is made from carbon fibre composites – lightweight materials which demonstrate exemplary energy absorption, hence ensuring the highest standard of occupant protection. 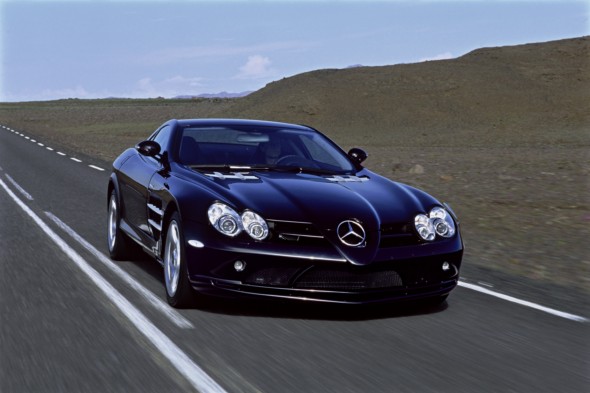 The SLR is the world’s first series-produced car to have a front crash structure manufactured entirely from carbon fibres. 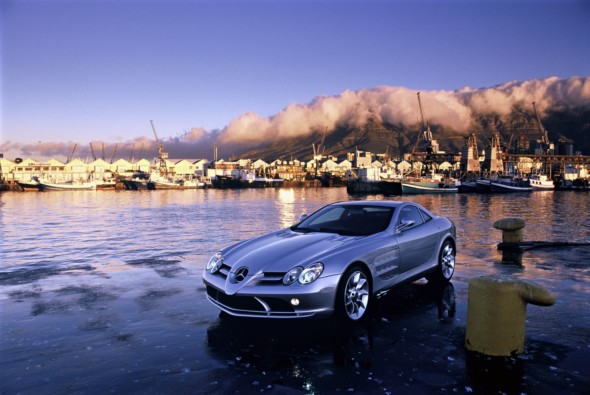 Adaptive airbags, newly developed kneebags and sidebags, belt tensioners, high-performance ceramic brake discs and an automatically adaptive airbrake in the boot lid round off the range of safety equipment on board the Mercedes-Benz SLR McLaren, setting new standards in this vehicle class. 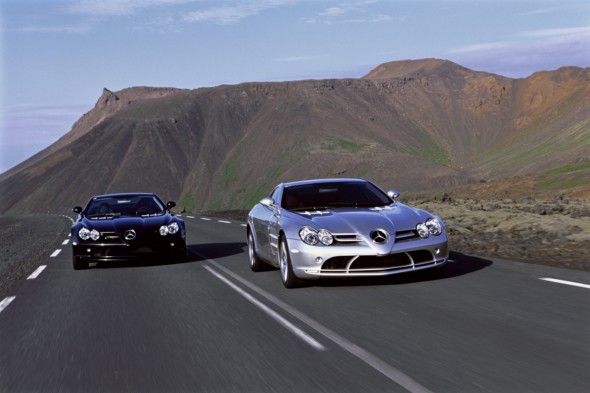 Technology way ahead of its time and an abundance of power – these were the hallmarks of the legendary SLR race cars in which Fangio, Moss, Kling and other Mercedes drivers achieved spectacular victories in all of the major road races in 1955. 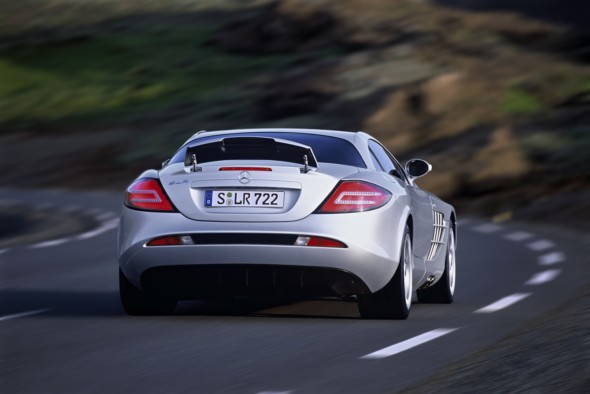 The new SLR demonstrates the same characteristics, its groundbreaking technical innovations distinguishing it as the Mercedes-Benz among high-performance sports cars. 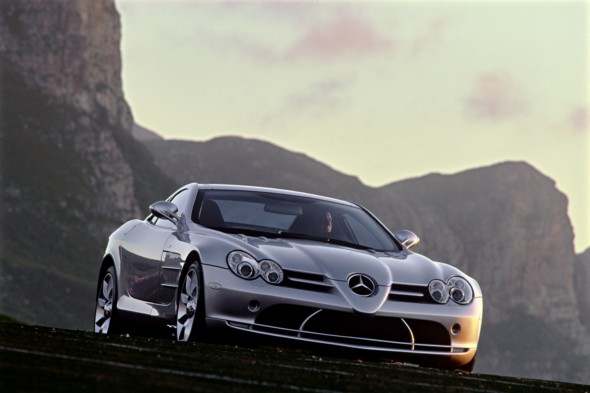 The 21st-century Gran Turismo is made almost entirely from carbon fibre composite.

This lightweight yet extremely rigid material originated in the aeronautical and space industries and has also proven its benefits in today’s Formula 1 race cars. 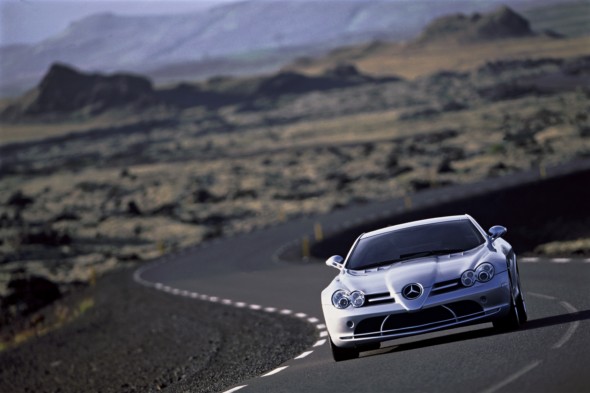 The weight advantage of the high-tech material over steel is around 50 percent, and the carbon fibres, on impact, are characterised by four to five times higher energy absorption than steel or aluminium. 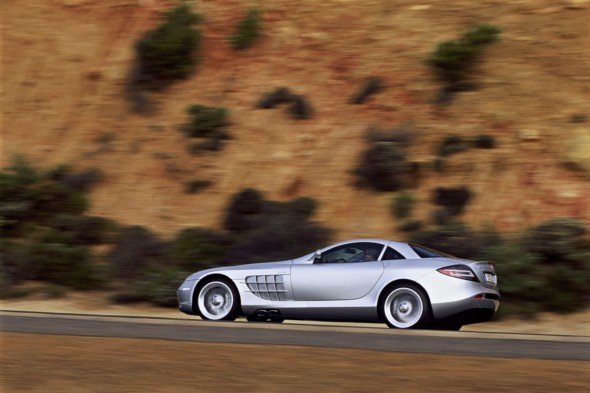 Mercedes-Benz exploits these qualities by incorporating two 620-millimetre longitudinal members made from carbon fibre in the front structure of the new SLR.

These absorb the entire energy of the crash in a defined head-on collision, leaving the passenger cell largely undamaged. 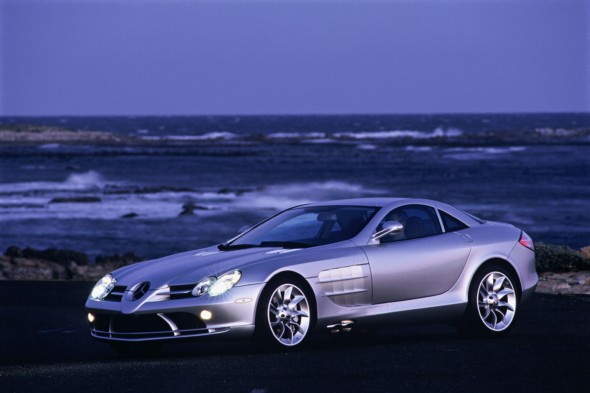 It is also made entirely from carbon fibre composite and therefore offers a very safe survival zone in side-on or rear-end collisions too. 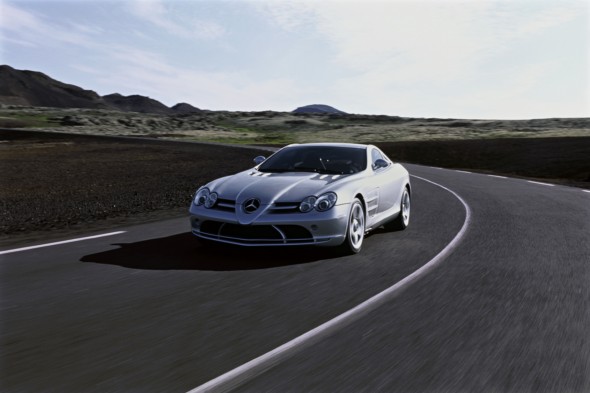 Mercedes-Benz has introduced new material technology to the manufacture of the brake discs too. They are made from fibre-reinforced ceramic and are characterised by high fade-resistance and a very long life. 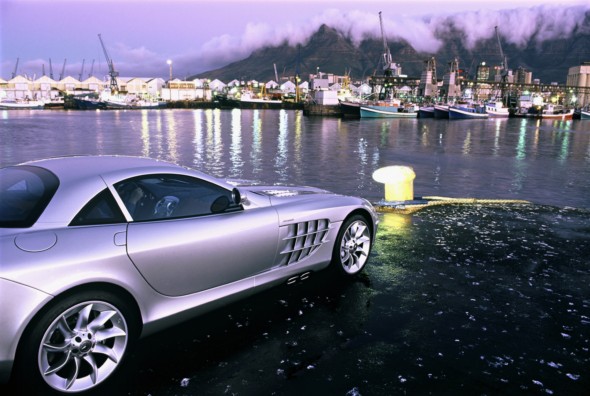 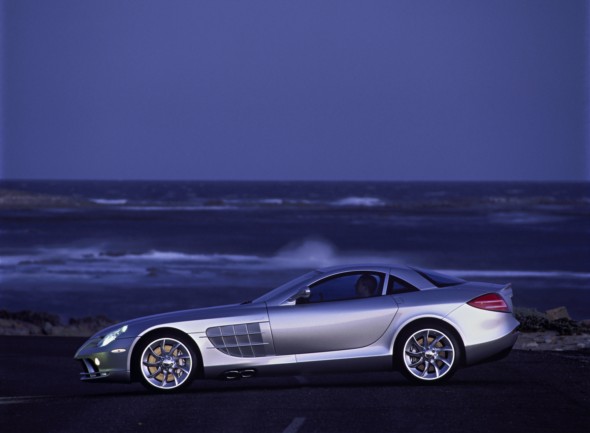 In the interests of optimum dynamic handling and high stability on braking, the new Mercedes-Benz SLR McLaren has a front mid-engined design. 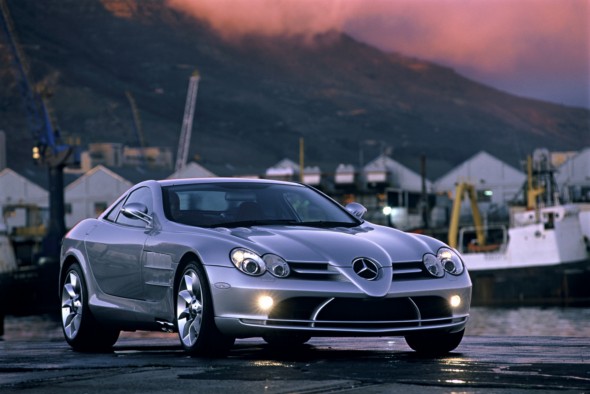 The high-performance V8 engine, mounted on a robust aluminium frame, is installed at a low level which allows a low centre of gravity for agile handling. 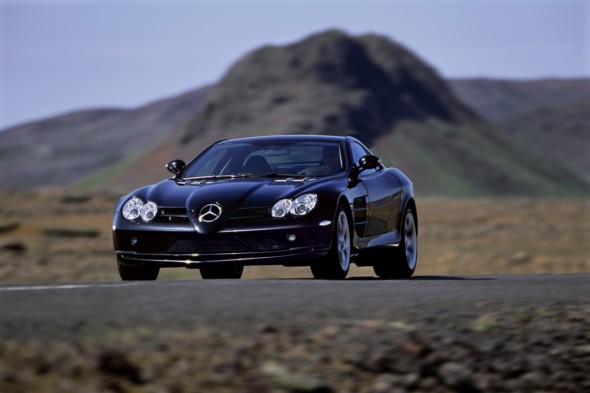 With its 5.5-litre displacement, the supercharged engine develops a peak output of 460 kW/626 hp and delivers its maximum torque of 780 Newtonmetres from 3250 rpm – a figure which remains constant across a broad engine speed range of up to 5000 rpm.

This means that the SLR 8-cylinder is among the most powerful engines currently available in a series-produced roadgoing sports car. 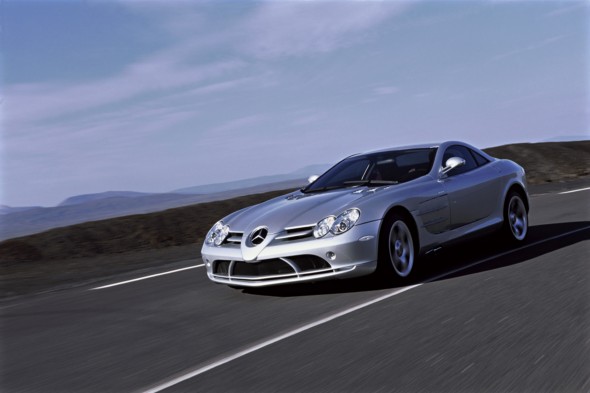 Water-type charge-air cooling, dry sump lubrication and four metal catalytic converters are further special features of this powerful engine – an engine which already meets stringent EU 4 exhaust gas regulations which are not due to come into force until 2005. 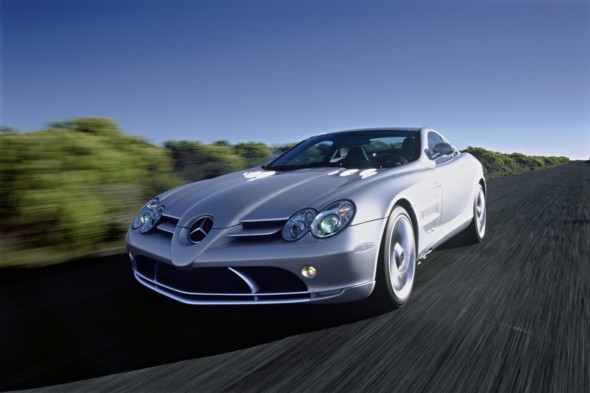 The 5-speed automatic transmission, fitted as standard, is also designed for high performance. It allows the driver to choose between three programs with different shift characteristics.

When “Manual” is selected, the five gears can either be shifted using buttons on the steering wheel or using the selector lever’s Touchshift function.

In this mode the driver can also select between three shift stages – “Sport”, “SuperSport” and “Race” – significantly shortening the shift times still further for an even sportier drive. 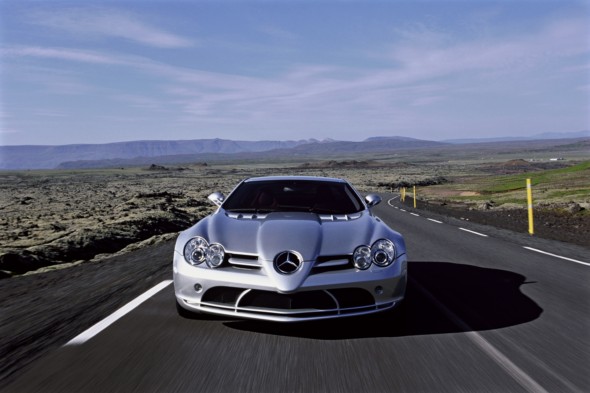 Aerodynamic concept uses expertise from the world of Formula 1

The body design of the Gran Turismo with the Mercedes star takes classical styling elements from the legendary SLR race cars of the 1950s and blends them masterfully with the sophisticated, avant-garde design language of both the latest Mercedes passenger car models and of the modern-day Silver Arrow race cars which took the McLaren Mercedes team to Formula 1 World Championship glory in 1998 and 1999. 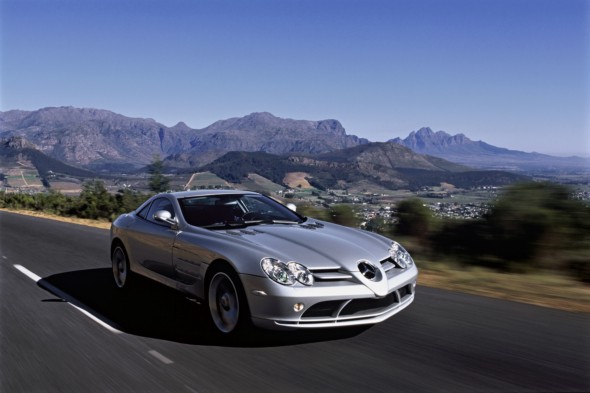 The design’s concept, in other words, thrillingly spans the divide between past and present, whilst at the same time showing the way forward for the sports car designs of tomorrow. 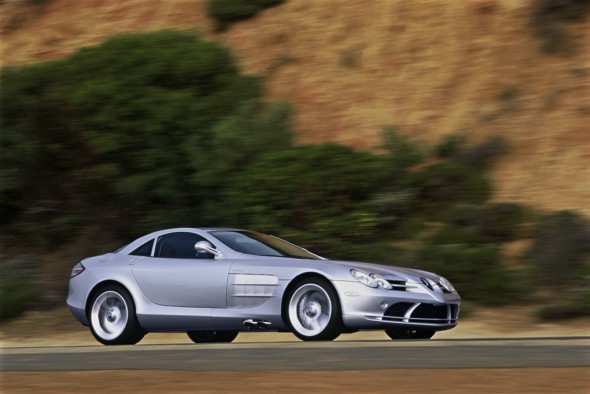 In order to meet the highest of standards in terms of handling at top speed, directional stability and the cooling air requirements necessary for high-performance cars of this kind, Mercedes-Benz worked with McLaren on developing this model’s superlative aerodynamics, ensuring exemplary roadholding plus the on-road safety standards typical of Mercedes. 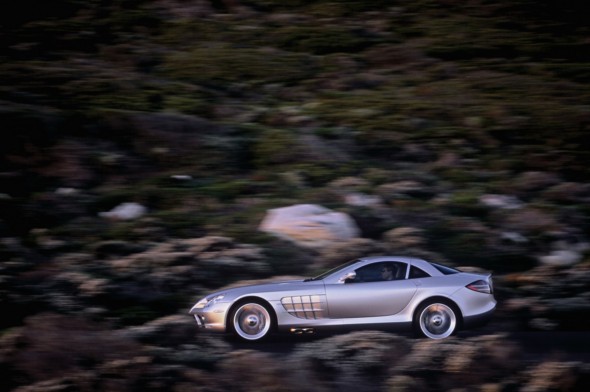 Following extensive wind-tunnel tests, the Mercedes-Benz SLR McLaren was given a virtually smooth underbody with a special six-channel diffusor under the rear.

Both features are familiar design principles from Formula 1. They ensure that the airflow beneath the vehicle is virtually unimpeded and that negative lift, or downforce, is produced at higher speeds. 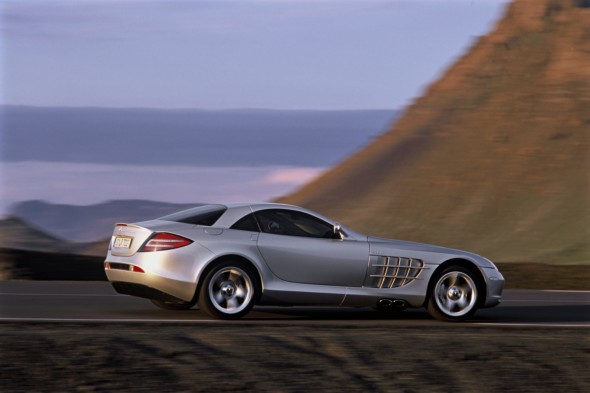 The distinctive sidepipes on each side of the vehicle are also the result of this high-performance sports car’s aerodynamic underbody concept: a conventional exhaust gas system would have disrupted the smooth line of the underbody. 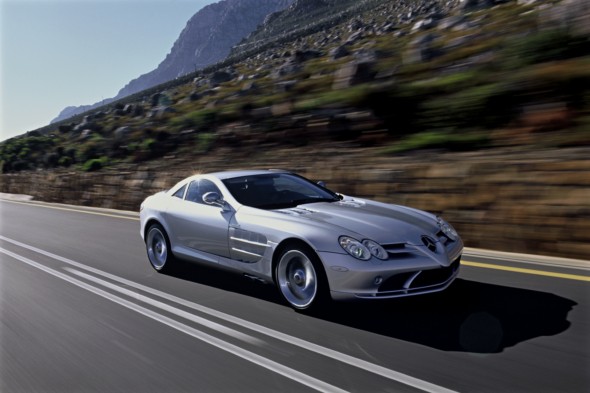 At the rear of the SLR an adaptive spoiler provides additional downforce. From a speed of 95 km/h, it automatically adopts a 10-degree position, increasing the contact pressure at the rear axle. 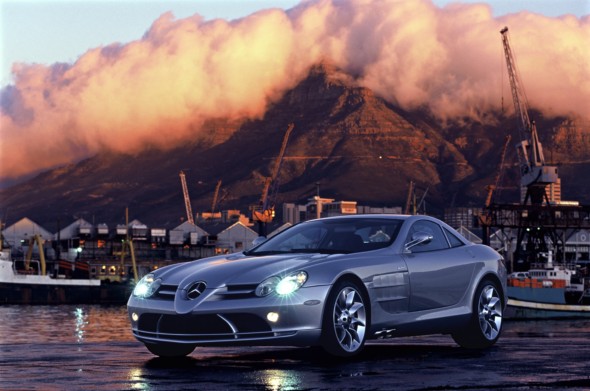 The spoiler also doubles as an airbrake: when the driver brakes heavily, it rises to an angle of 65 degrees, not only ensuring increased aerodynamic drag but also shifting the aerodynamic centre further towards the rear.

This lends the SLR excellent stability when braking from high speeds. 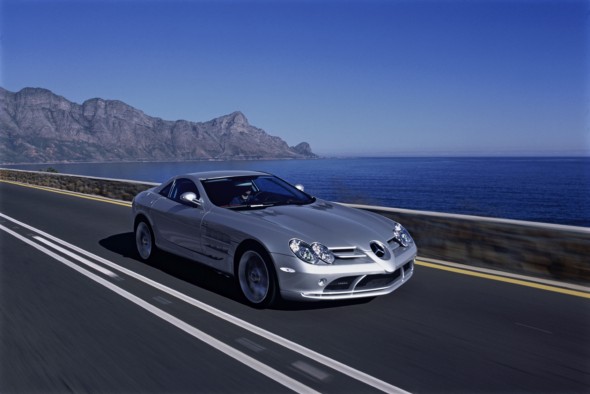 It is the very high levels of practicality and luxury that truly make the interior of the SLR stand out. Individually padded carbon-frame seats, a multifunction steering wheel with race-car-type buttons for manual gear selection, clearly arranged chronometer-style instruments and high-grade materials define the atmosphere inside the high-performance sports car. 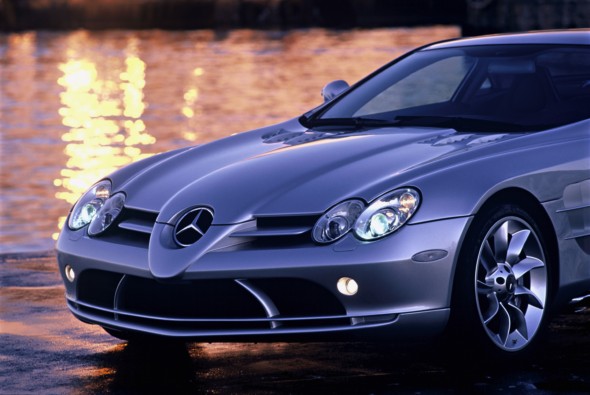 Alongside carbon and aluminium, the Mercedes designers have used “Silver Arrow” leather, specially developed for the SLR, which is available in the distinctive red of the legendary 1950s SLR race car. 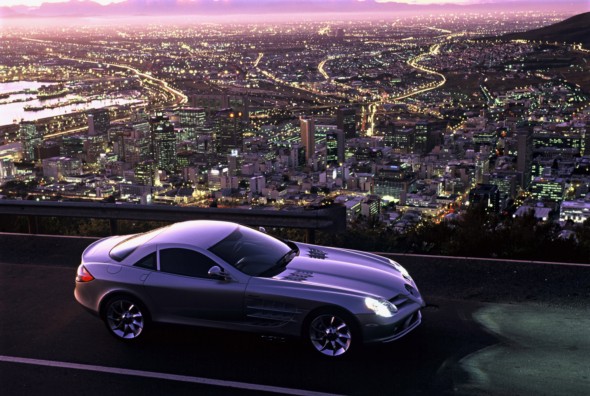 Technical highlights in the standard equipment 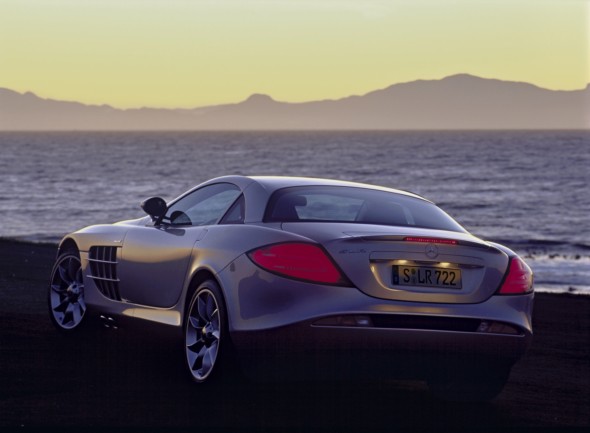