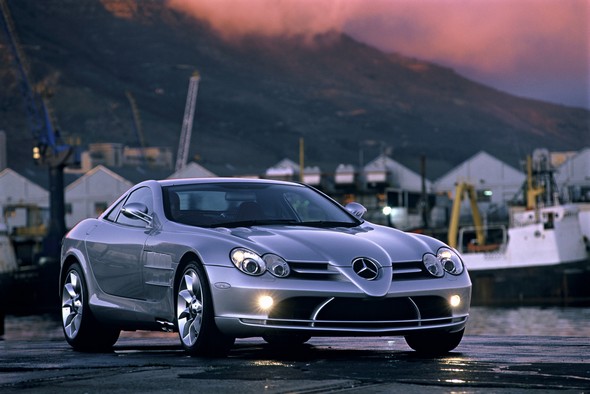 The new Mercedes-Benz SLR McLaren is an impressive testament to the expertise and experience of Mercedes-Benz and its Formula-1 partner McLaren in the development and production of high-performance sports cars.
With its 5.5-litre displacement, the supercharged engine at the heart of the sophisticated Gran Turismo develops an output of 460 kW/626 hp and delivers its peak torque of 780 Nm from 3250 rpm – a figure which remains constant across a broad engine speed range of up to 5000 rpm. This means that the SLR eight-cylinder is among the most powerful engines currently available for series-produced roadgoing sports cars. This high-performance car takes just 3.8 seconds to sprint from 0 to 100 km/h, it passes the 200-km/h mark after just 10.6 seconds, and it takes only 28.8 seconds to reach 300 km/h. Its top speed is 334 km/h.

[adsense]
In order to meet the highest of standards in terms of handling at high speed, directional stability and the cooling-air requirements for high-performance cars of this kind, Mercedes-Benz worked with McLaren on developing this model’s superlative aerodynamics. The result is exemplary roadholding plus the on-road safety standards for which Mercedes-Benz is renowned. Following extensive wind-tunnel tests, the Mercedes-Benz SLR McLaren was given a virtually smooth underbody with a special six-channel diffusor under the rear. Both features are familiar design principles from Formula 1. They ensure that the airflow beneath the vehicle is virtually unimpeded and that negative lift, or downforce, is produced at higher speeds.
Additional downforce is provided by the adaptive spoiler at the rear of the SLR. From a speed of 95 km/h, it automatically adopts a ten-degree position, increasing the contact pressure at the rear axle. The spoiler also doubles as an air brake.

Safety: high-tech materials from the world of Formula 1

The SLR McLaren is made almost entirely from carbon-fibre composite (CFRP). This lightweight yet extremely rigid material originated in the aeronautical and space industries and has also proven its benefits in today’s Formula-1 race cars. The weight advantage of this high-tech material over steel is around 50 percent. In addition, the carbon fibres are characterised by four to five times higher energy absorption than steel and aluminium in the event of an impact. Mercedes-Benz therefore uses two 620-mm side member elements made from carbon fibre in the front structure of the SLR. These elements absorb all the crash energy in the defined frontal impact test.

The occupant compartment is also made entirely of CFRP, thus ensuring that the survival space remains largely intact, i.e. undamaged, even in the event of a side or rear impact. Adaptive airbags, newly developed kneebags and sidebags as well as belt tensioners round off the comprehensive safety equipment package.
Mercedes-Benz also uses groundbreaking technology to produce the brake discs. They are made of fibre-reinforced ceramic, which gives them extreme fade-resistance and great durability. In addition, the brakes work in tandem with the electrohydraulic brake system Sensotronic Brake Control (SBC™) to ensure exceptional deceleration rates which impressively underline the race-car character of the Mercedes-Benz SLR McLaren.