The Maybach brand is bringing out the new Maybach Zeppelin to spearhead its luxury saloon model range. The new model, which is receiving its premiere at the Geneva Motor Show, represents the absolute zenith in the high-end luxury saloon segment. This makes it a worthy successor to the legendary Maybach Zeppelin, which was revered worldwide as the ultimate in high-class automotive engineering in the 1930s. The hallmark features of the new Maybach flagships unique sense of style include a stunning paint finish, featuring a shoulderline in a contrasting colour, as well as the exquisite, meticulously crafted materials in the interior, whose long list of optional extras includes a world first a highly sophisticated perfume atomiser. The new models performance even outclasses the rest of the Maybach range, making it the most powerful Maybach ever. In a nutshell: the Maybach Zeppelin epitomises stylish elegance and the art of vehicle manufacture at its most refined as no car has ever done before. The new Maybach Zeppelin is being built in a limited edition of just 100 worldwide.

Even today, the name Zeppelin has an incomparable ring to it in the realm of high-end luxury cars. As in bygone times, Maybach is once again building the Maybach Zeppelin for drivers who are seeking something extra special, even in this most luxurious of automotive segments. Not only do the Maybach 57 Zeppelin and Maybach 62 Zeppelin stand out for their exquisite elegance, inventive ideas and phenomenal performance, only one hundred of these special model versions of the high-end luxury saloons will be made worldwide.
Even greater power for the Maybach Zeppelin

The Maybach 57 S and the long-wheelbase version, the 62 S, serve as the technical basis for the new range-topping model. Supreme performance is assured in both cases by the 6.0 litre V12 biturbo power unit under the bonnet, which now delivers 471 kW/640 hp (+ 28 hp) and a peak torque of 1000 Newton metres. 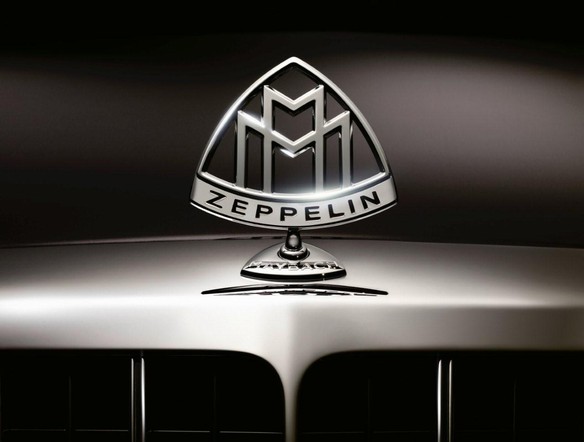 Whatever angle it is viewed from, the new Maybach Zeppelin radiates character and the sort of style which appeals to all the senses. From the outside, the luxury brands new top-of-the-range model can be recognised by its two-tone special paint finish. The shoulderline is painted right through to the background of the headlamp assemblies in Rocky Mountains light brown, which forms a stylish and scintillating contrast to the Taiga black finish used for the rest of the vehicle body. Dark red tail light units and a fine vertical partition in the tailpipe add striking visual touches at the rear. Naturally, customers may also specify their Maybach Zeppelin in any other paint finish they wish.

The Maybach Zeppelins newly designed 20-inch wheels in a Chrome Shadow finish complete the picture. These were first painted with a black undercoat, before having a silver topcoat applied using an elaborate painting process that causes the tone to gradually increase in darkness from the outside in.
The streamlined exterior mirrors, which produce even less wind noise, are new to Maybach. They have a more angular design and are separated from the door frame by a slender arm, giving them a more expressive look. They also feature an enlarged mirror surface together with integral indicators in the shape of a horizontal V for even greater perceptual safety.
The curving ZEPPELIN lettering that appears below the distinctive double M emblem on the radiator grille and on the boot lid instantly gives away the elite status of the new Maybach Zeppelin. 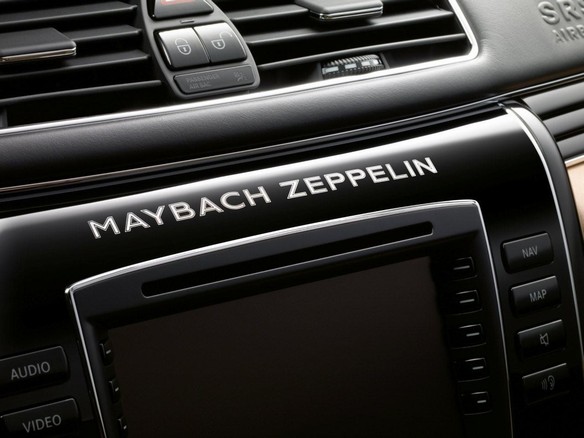 Finest-quality leather and high-gloss piano lacquer trim
The new Maybach Zeppelin is a car for connoisseurs, as is immediately apparent from its interior. Here, the luxurious leather appointments in California beige leather form a delightful contrast with the exclusive leather in deep Stromboli black that gives added impact to the shoulderline on the inside too. At the same time, the lustrous deep black tone of the leather harmonises beautifully with the exquisite piano lacquer finish of the trim elements. The precisely crafted contrasting topstitching in the dashboard and on the doors reinforces the Maybach Zeppelins sense of dynamism. The unusual diamond quilting pattern on the seat cushions and backrests together with the black piping gives the opulently styled seats a character all of their own. The occupants feet rest on genuine lambskin carpeting.

The limited-edition special models bear a number of discreet identifying markings in the interior too. The centre console in the front, the partition screen that is available as an option for the Maybach Zeppelin 62, plus the silver champagne flutes included as standard are all marked with the lettering MAYBACH ZEPPELIN, while the door sill panels as well as the key ring are engraved with the word ZEPPELIN. 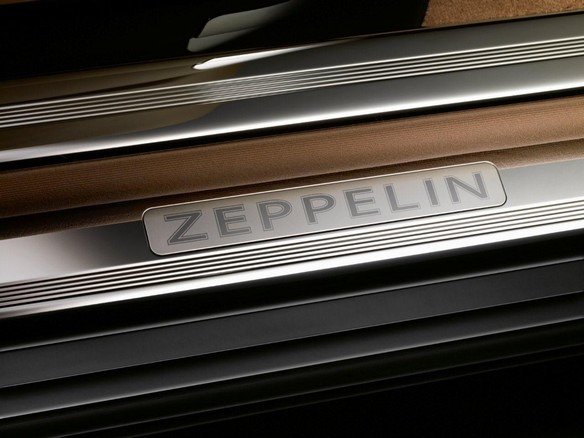 World first a system for a fine interior fragrance 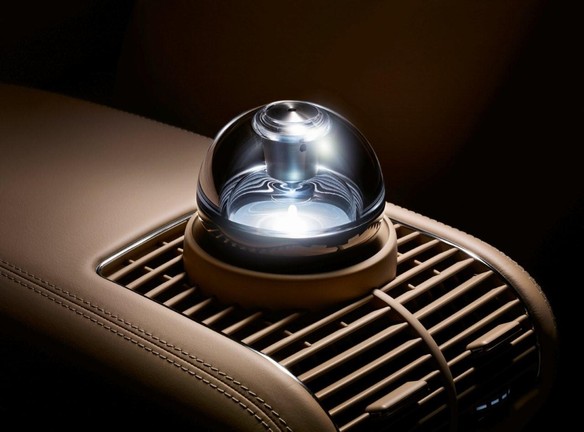 Customers are also able to opt for an especially refined equipment detail that is exclusive to the Maybach Zeppelin an imaginatively designed, extremely high-quality perfume atomiser, the only one of its kind in the world. It easily eclipses all previous efforts to produce something similar, both in terms of its visual appeal and its operation. Its sophisticated technology and premium fragrances, which can be individually chosen, create a unique aromatic experience in the Maybach Zeppelins interior at the push of a button stimulating the senses of the occupants not with an overpowering perfume but with a soft, delicate scent.
The systems core component is an internally illuminated Plexiglass sphere on the rear centre console, into which Maybach Zeppelin owners can insert a vial of their preferred fragrance. A regulator pump then directs a gentle flow of air into the Plexiglass sphere, fanning the vial’s perfume molecules into the vehicle interior.
The ingenious control understands the human sense of smell

The perfume atomiser can be activated either from the drivers seat or by means of a button in the rear centre console, with an additional thumbwheel in the rear for sensitive aroma control. The chosen fragrance gently wafts into the passenger compartment within ten to twelve seconds. On models with a partition screen, only the passengers in the rear are able to activate the atomiser.
The aroma experts took the human sense of smell into consideration when designing the control mechanism. As the nose adjusts to smells in such a way that it no longer perceives them after a short while, the perfume atomiser switches off after about ten minutes. Once the system has switched off, the fragrance which does not seep into the interiors materials or the occupants clothes quickly evaporates. Reactivating the atomiser later allows the experience to be enjoyed all over again.
Artistic, hand-blown vials and specially developed fragrances
The system comes supplied with two select fragrances, which have been exclusively developed for the Maybach by a renowned perfumer from global specialist Givaudan: one light and refreshing, the other slightly heavier and woodier. Maybach Zeppelin owners can also use other fragrances, or even have one specially developed and enjoy the luxury of immersing themselves in their very own, personally designed aroma. The fragrance holders are easily interchangeable. The specification includes a total of three valuable vials, which are hand-blown by a well-known glass artist.

The elaborate, silent-running perfume atomiser system is a patented Maybach innovation.
The Maybach 57 Zeppelin costs 406,000, the Maybach 62 Zeppelin has a price tag of 473,200 (German list price, excl. VAT). The perfume atomiser that is exclusive to the Zeppelin can be ordered for an extra 3950 (German list price, excl. VAT).
The new Maybach Zeppelin goes on sale on 3 March 2009, with the first models expected to be delivered to customers in September 2009.