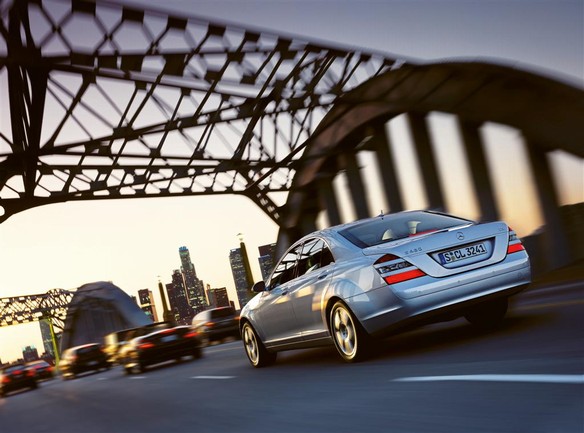 Mercedes-Benz is extending its S-Class range with another diesel variant, the S 420 CDI. The new eight-cylinder model is powered by a state-of-the-art V8 CDI engine developing 235 kW/320 hp and 730 newton metres of peak torque. This latest addition to the model line-up means that the luxury saloon range from Mercedes-Benz now encompasses two diesel engines, six petrol models and two body variants, along with the new 4MATIC all-wheel-drive system.

The new S 420 CDI is available to order now, with deliveries to customers due to start in December 2006. The short-wheelbase model is priced at 84,448 (net price 72,800) and the long-wheelbase version at 92,104 (net price 79,400).
The new V8 model’s strengths are effortlessly superior performance combined with moderate fuel consumption. The S 420 CDI powers from 0 – 100 km/h in 6.6 seconds and goes on to reach 250 km/h (electronically governed), all while returning fuel consumption figures below the magic ten litre threshold, burning just 9.4 to 9.6 litres of diesel per 100 kilometres on the NEDC cycle. With a fuel tank capacity of 90 litres, this equates to ranges approaching the 1000 kilometre mark.

Such impressive figures are down to the highly advanced eight-cylinder turbodiesel engine under the bonnet: from its 3996 cc displacement, the CDI unit with four-valve-per-cylinder technology delivers a maximum output of 235 kW/320 hp at 3600 rpm and a peak torque of 730 newton metres, which is on tap from 2000 rpm.

The new V8 powerplant is equipped as standard with a maintenance-free diesel particulate filter to cut untreated emissions even further, and also complies with the EU4 emissions standard. The engine development team was able to reduce noise levels by optimising the chain drive and fitting a rigid crankcase with large engine bearings as well as extra acoustic covers. The square bore-to-stroke ratio combines with a counter-rotating balancer shaft for outstandingly smooth operation.

Power transmission in the S 420 CDI is handled by the standard-fitted 7G-TRONIC automatic transmission with a DIRECT SELECT lever on the steering column, plus steering-wheel gearshift buttons. Not only does this combination guarantee that the tremendous reserves of power and torque are harnessed to optimum effect, the seven-speed automatic transmission’s wide ratio spread is also perfect for motoring at low rev speeds � ideal for quiet, fuel-efficient travel.

The top-of-the-range S-Class diesel model comes as standard with AIRMATIC air suspension including the Adaptive Damping System (ADS) and an all-round self-levelling function, while the latest-generation Active Body Control (ABC) can be specified as an option.

Broader model range than any other competitor in the world

The arrival of the new S 420 CDI sees Mercedes-Benz further expand its S-Class range to eleven models, making it the broadest luxury-segment model selection in the world. The two diesel variants, the S 320 CDI and S 420 CDI, line up alongside a choice of six petrol-powered models, including the S 450 whose new eight-cylinder engine extracts 250 kW/340 hp and 460 newton metres of torque from its 4.6-litre displacement. The line-up is headed by two extra dynamic and exclusive AMG high-performance models. The redeveloped 4MATIC all-wheel drive can be ordered for three of the S-Class variants. All models are available with either the short or the long wheelbase; the long version is standard for the V12 models.

As the top-selling luxury model worldwide, the S-Class comfortably outstrips the sales figures for its rivals in every region of the world. In the first ten months of 2006, over 70,000 new luxury saloons were delivered to customers, the highest figure ever in the history of the company. On diesel sales too, the S-Class is again the No. 1 in the luxury segment, and Mercedes-Benz is now adding an exceptionally powerful model to the diesel line-up in the form of the new S 420 CDI. It is the successor to the V8-powered S 400 CDI that proved so popular in the previous S-Class range.

PRE-SAFE as standard, Brake Assist PLUS as an option

The unrivalled PRE-SAFE occupant protection system also forms part of the standard specification for the new leading S-Class diesel model. PRE-SAFE is able to recognise potential accident situations as soon as they start to develop: if the rate of braking deceleration exceeds a certain threshold or there is a risk of skidding, the system triggers anticipatory measures, pulling the front seat belts taut and, if necessary, raising the front passenger seat backrest into a more upright position. On models fitted with the optional multicontour seats, the air cushions are inflated too so that they help to brace the front passenger and the occupants in the rear. The sliding sunroof (optional) is closed as a further precaution.

Brake Assist PLUS (BAS PLUS) can be specified as an optional extra. It uses radar to track any vehicles ahead of the car and warns the driver if the S-Class gets too close to the vehicle ahead or is approaching it too quickly. If there is a risk of collision, the system instantaneously calculates the optimal braking power required and makes this available immediately as soon as the driver starts braking, even if the brake pedal is not pressed hard enough.

The result is a significant reduction in the number of rear-end collisions. Combining the new Brake Assist PLUS with PRE-SAFE allows occupant protection to be taken to even greater heights. The introduction of PRE-SAFE has made Mercedes-Benz the first automotive brand in the world to fit as standard such an extensive safety system that swings into action ahead of a potential accident.

For the first time ever in the S-Class, Mercedes-Benz is offering a complement to this multi-award-winning anticipatory protection system, in the form of the newly developed PRE SAFE Brake system. This works in unison with Brake Assist PLUS (BAS PLUS), which issues drivers with a visual and an acoustic warning of an impending rear-end collision with a vehicle ahead and automatically calculates how much braking power is needed to prevent the collision.

The braking power is boosted as required the instant the driver presses the brake pedal. However, should the driver fail to heed the warnings and the risk of an accident become acute, the PRE-SAFEBrake system automatically initiates partial braking to decelerate the S-Class with around 40 per cent of maximum braking power. This partial self-braking in effect a “virtual” crumple zone is a further tangible prompt for the driver to take action.

If the brake pedal is pressed at this stage, maximum braking power will be applied. Depending on the particular situation, this could be enough to avert a collision at the last moment. If it is not, the severity of the impact will at least be mitigated and the risk of injury to the occupants therefore lessened thanks to the PRE-SAFE Brake. Mercedes-Benz offers BAS PLUS and the PRE SAFE Brake as an option in conjunction with DISTRONIC PLUS proximity control.

DISTRONIC PLUS: assistant for driving in stop-start traffic

The radar-assisted DISTRONIC PLUS system is operative in a speed range from zero up to 200 km/h and enables even more comfortable motoring. In stop-start traffic, DISTRONIC PLUS keeps the new S-Class at the programmed distance from the vehicle ahead, automatically brakes the saloon to a halt and accelerates back up to the stored speed upon the driver’s command. In this way, the assistance system relieves the strain on the driver whilst giving a major boost to driver-fitness safety. The Brake Assist PLUS and DISTRONIC PLUS package also comprises a Parking Assist system, which uses the radar technology to give advance warning of an imminent collision at the front or rear of the vehicle when parking.

The standard specification for the new S 420 CDI includes a host of high-tech systems which are designed to enhance levels of safety and comfort such as the ADAPTIVE BRAKE system, seats with 12-way electrical adjustment, COMAND with DVD player, DIRECT SELECT gearshift and automatic climate control.