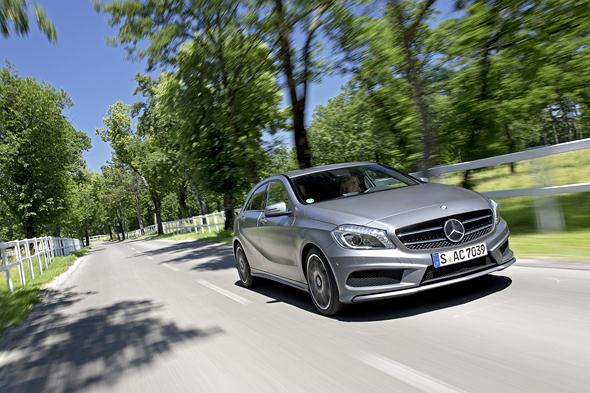 With fuel savings of up to 26 percent, emissions as low as 98 g CO2/km, a best-in-class Cd value of 0.27 and all petrol-engine variants complying with the Euro 6 emissions standard, the A-Class sets new benchmarks in efficiency. Its high environmental performance has now also been confirmed by the inspectors at the TÜV Süd technical inspection authority, who have awarded the sporty compact model from Mercedes the Environmental Certificate in accordance with ISO standard TR 14062.

This certification is based on a comprehensive ecological life-cycle assessment of the A-Class, documenting every detail of ecological relevance.

“Driving pleasure combined with exemplary efficiency is the quintessence of the new A-Class from a technical point of view. The new engines and transmissions are a major contributory factor here,” explains Professor Dr Herbert Kohler, Chief Environmental Officer at Daimler AG.

“We are particularly proud that the A 180, A 200 and A 250 even undercut the very strict particle count limit of 6×1011 per km, which will not become mandatory until the second stage of the Euro 6 standard is introduced in 2017.”

Mercedes-Benz analyses the environmental compatibility of its models throughout their entire life cycle – from production through their long years of service to recycling at the end of their lives. This analysis goes far beyond the legal requirements.

The Environmental Certificate and supplementary information are made available to the public in the “Life Cycle” documentation series, which is retrievable at http://www.mercedes-benz.com.

Over the entire life cycle of the Mercedes-Benz A-Class – from production and service over 160,000 kilometres to recycling – the new model in the guise of the A180 BlueEFFICIENCY causes 16 percent (5.7 tons) less CO2 emissions than its predecessor when the latter was discontinued in 2012.

The energy balance shows a similarly positive picture, with primary energy consumption over the vehicle’s entire life cycle cut by 15 percent in comparison to its predecessor. This corresponds to the energy content of around 2400 litres of petrol.

The marked reductions in fuel consumption represent a substantial contributory factor here. The so-called BlueEFFICIENCY technologies combine optimisation measures in the area of the powertrain, energy management, aerodynamics, tyres optimised for minimum rolling resistance, weight reduction through lightweight construction and driver information to encourage an energy-saving style of driving in an intelligent package of measures.

The A-Class already meets the stipulated recycling rate of 95 percent by weight. The European ELV Directive 2000/53/EC additionally requires vehicle manufacturers to continually increase the input of recycled materials in their production processes.

In all, the new A-Class incorporates 46 components representing a total weight of 34.2 kilograms which can be produced with the partial use of high-quality recycled plastics. This results in an eleven percent increase in the weight of approved recycled components in comparison to the previous model.

20 components in the A-Class, representing a total weight of 20.8 kilograms, are produced using natural materials – an increase of 36 percent over the previous model. A biopolymer is being used for the first time in large-scale production at Mercedes-Benz in the engine cover on the new A-Class (petrol engine M 270).

Biopolymers are plastics which are produced in part from vegetable-based raw materials rather than solely from mineral oil. The polyamide employed in the production of the engine cover for the A-Class consists of around 70 percent vegetable raw materials. These are obtained from the seeds of the castor-oil plant.

Production of the engine cover made of biopolyamide results in only around 40 percent of the quantity of carbon dioxide emissions which would be necessary in order to produce the same component in a conventional polyamide.

Special exhibition at the Mercedes-Benz Museum