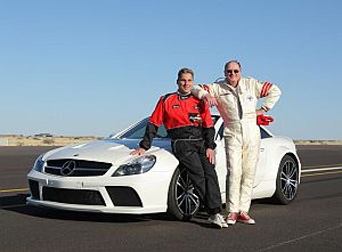 Heinz Wagner and his navigator, Ray Wakefield, after he set a new land speed record for the blind in Upington.
Upington – A South African man set a new world land speed record for the blind in Upington on Tuesday, when he reached a speed of 322.5km/h in a Mercedes-Benz SL 65 Black series.
Heinz Wagner, who was born blind, is a motivational speaker from Durbanville.
In 2005 Wagner became the first South African to set a world land speed record. He reached 269km/h in a Maserati.
According to him, reaching a speed of 200 miles per hour (321.9km/h) is a milestone for any driver, regardless of whether they’re sighted or blind.

Record
His feat will be entered in the Guinness World Records, as he broke the previous record of 308km/h, set by a blind Belgian. Wagner maintained the 322.5km/h speed for a distance of 1 000m.
The runway at the Upington International Airport proved to be long enough for accelerating, setting the record, and safely coming to a standstill.
Wagner wants to use this record to raise funds for his Vision Trust organisation, which is aimed at making technology more accessible to the blind.
Finding an appropriate car proved to be a challenge, but the solution appeared in the form of a powerful Mercedes-Benz which belongs to Johannesburg businessman Lolly Jackson.
Global Consulting Solutions sponsored the insurance of R50 000 for the two days. His navigator was Ray Wakefield from Speedrecord SA.
Wagner thanked the airport staff and the ambulance service for their support.

Next challenge
According to him, “you’re stupid if you aren’t scared” when tackling such a record. He is already preparing for his next challenge: flying a Boeing – passengers and all – from London to Johannesburg.
Wagner has many adventures under his belt. In 2006 he completed the New York City Marathon in 4 hours and 27 minutes. He also performed his first skydive in 2005, from a height of 10 000ft (3km).
He completed a cycling race, the Construction du Cap, as a solo cyclist. He also participated in the Cape-to-Rio yacht race and climbed the ten highest mountains in the Western Cape.

Mercedes museum gets a refill