Stuttgart – With a contraction of 11 percent, the global bus market proved to be relatively stable in 2009, given overall economic developments around the world during that exceptional year. Demand in Western Europe was substantially more stable, declining by five percent. The city bus segment in particular benefited from strong public-sector demand, while the travel coach segment suffered a sharper decline. Demand in Latin America and Mexico decreased significantly, declining by 20 percent and 50 percent, respectively. By contrast, the markets in North America and Asia were about as stable as that of Western Europe. At 32,482 complete buses and chassis, in a difficult overall market environment unit sales at Daimler Buses in 2009 fell by 20 percent from the record figure for 2008. Revenues decreased by 12 percent, a much less severe decline than that for sales. The lower decline for revenues was mainly due to decreased demand for chassis in Latin America coupled with demand skewed toward complete buses in the U.S. and Europe, where business was also much more stable.

Daimler Buses bucked the market trend in the U.S., Canada and Asia by increasing sales in those markets and also gaining market share. All in all, Daimler Buses achieved a global market share of 13 percent in the exceptionally difficult year of 2009, putting it far ahead of its competitors as the world’s leading supplier of buses >8t.

At €183 million, EBIT was lower than the figure achieved in the record year of 2008 (€406 million). Return on Sales (RoS) was very positive at 4.3 percent. The sharp drop in EBIT was a result of lower demand worldwide, extremely negative exchange rate effects (which were particularly felt in Brazil), and substantially higher investments in research and development and in the successor generations of the existing product range.

Hartmut Schick, Head of Daimler Buses, talked today in Stuttgart about the business development of Daimler Buses in 2009 and the strategy of the division. With regard to last year’s business result, Schick said: “Our global scope and flexible and robust business model proved their effectiveness in a difficult situation and helped us to be Number One in terms of both sales and profitability. Daimler Buses was the world’s most profitable bus manufacturer in 2009 as well as one of the most successful automotive companies. We prepared ourselves well for the future in a difficult global market environment, and we will emerge from the crisis even stronger than we were before.”

The sustained success of Daimler Buses is due to a long-term strategy that encompasses the four core objectives of Operational Excellence/Efficiency, Growth in Established Markets, Growth in New Markets, and Technological Leadership.

The Beyond Bus Plus (BBP) efficiency-boosting program introduced by Daimler Buses in 2008 is an important component of the unit’s strategy. Cash flow improved significantly within the framework of BBP in 2009. In order to generate additional growth in established markets, Daimler Buses is also increasing its investment in service and aftersales activities, in the successor generations of the existing product range, and in compliance with global environmental legislation and Euro 6. The unit’s European production network and flexible production system enable Daimler Buses to optimally exploit its capacities in established markets, which is why production capacity in the core markets of Brazil (and thus Latin America) and Turkey were increased in 2009 so that the unit would be able to fully exploit market growth and the rising demand for buses once the crisis is over. 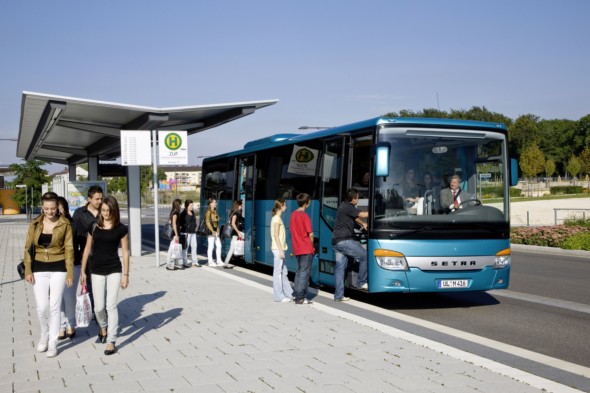 Daimler Buses continued to invest heavily in safeguarding its long-term future even in the economically challenging year of 2009. The research and development outlay of €210 million was €40 million higher than in 2008. The focus here was on investment in alternative and fuel-efficient drive systems, as well as in the successor generations of the current range of urban bus and travel coach models. Mercedes-Benz also unveiled two hybrid buses in 2009, the Citaro G BlueTec Hybrid and the Citaro FuelCELL Hybrid, both of which will undergo practical testing by customers in 2010. With more than 3,000 hybrid buses sold and delivered by its Orion brand, Daimler Buses is the world market leader in the hybrid bus segment.

Hartmut Schick explained Daimler Buses’ investment approach as follows: “We purposely increased our capacity with high investments in our production sites during the difficult year of 2009. We did this because it will allow us to immediately exploit all existing potential when demand begins to rise again. Of course, we also continue to invest heavily in alternative drives in order to strengthen, and even improve, our position as a technology leader in areas such as hybrid drives. In other words, we’re spending a lot of money to safeguard the long-term future of our company.”

After receiving positive feedback from customer driving tests, Daimler Buses presented a new three-axle travel coach for the Indian market at the beginning of 2010. Over the medium term, the unit will further expand its involvement in the key growth market of India by delivering city buses. Since 1993, Daimler Buses has also been cooperating successfully in China with the bus manufacturer Ankai, which produces Setra brand buses under license for the Chinese market. Another travel coach model will be manufactured and sold under license in China in the future.

Experts from the International Association of Public Transport (UITP) expect global public transport volume to double by 2025, which is why Daimler is relying on Bus Rapid Transit (BRT) solutions to meet growing public transport needs in large cities and regions undergoing rapid population growth. BRT solutions are high-performance transportation systems that offer an effective infrastructure for transporting a large number of people in a quick, efficient, and environmentally friendly manner that also helps eliminate traffic jams. 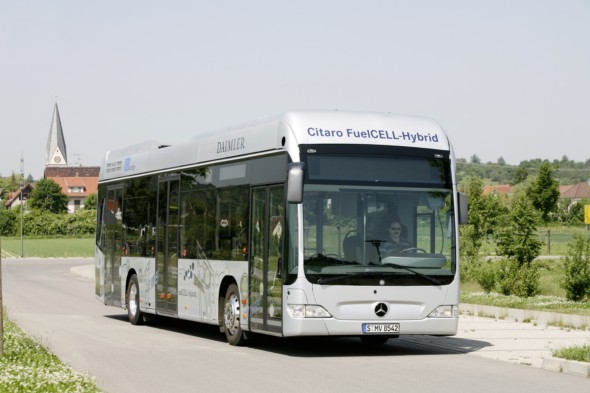 They provide an answer to current and future traffic challenges in rapidly growing cities and help elminate traffic bottlenecks in existing transportation systems. The transportation experts at Mercedes-Benz Buses serve as partners for local and regional traffic and urban planners, whom they support in analyzing, developing, and implementing BRT solutions.

The result is an economical and environmentally friendly transport concept that can be quickly implemented and into which existing local structures and human resources can be effectively integrated. In 2009, Daimler Buses’ BRT concept for Istanbul won the Sustainable Transport Award in the U.S. Daimler Buses also believes it has good chances of successfully introducing the BRT concept to Brazil, due to the country’s hosting of the Soccer World Cup in 2014 and the Olympic Games in 2016.

Sales are likely to increase mainly in Latin American markets in 2010, with Europe and Mexico also contributing to growth in 2011. Daimler Buses will benefit from this development, with EBIT amounting to about €180 million.

“Our goal is to grow twice as much as the world market as a whole,” said Schick.