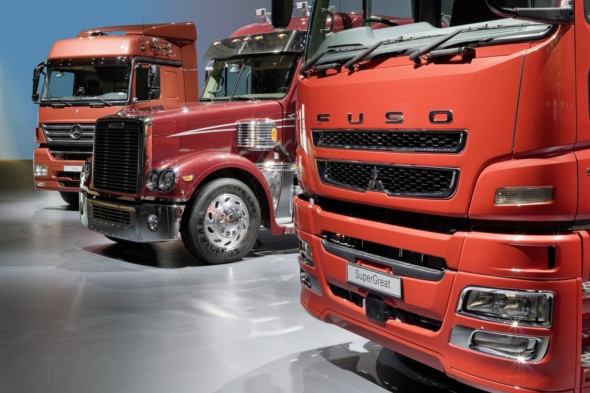 Stuttgart – In what was an exceptional year, global transport volume plummeted worldwide in the course of 2009. Purchases of new trucks were correspondingly low. After years of record sales, the sharp decline hit Europe at the beginning of 2009. The North American truck market once again contracted significantly last year, while the structural downward trend continued on the Japanese truck market, with the situation there exacerbated by the global economic crisis.

At 259,328 vehicles, worldwide sales at Daimler Trucks plunged by 45 percent during the course of 2009. The division’s revenues declined by 36 percent to €18,360 million. The fact that this drop was less pronounced was largely due to a more stable after-sales business. Daimler Trucks managed to maintain or even increase its market shares in the key regions.
As a result, Daimler Trucks maintained its global leadership in the medium and heavy-duty truck segments last year, despite the crisis. The division’s EBIT nevertheless dropped to minus €1.0 billion (2008: €1.6 billion), due to the one-time charges from the regional programs at Daimler Trucks North America (DTNA) and Mitsubishi Fuso Truck & Bus Corporation (MFTBC) in Japan.

Today in Stuttgart, Andreas Renschler, member of the Board of Management of Daimler AG with responsibility for Daimler Trucks and Daimler Buses, explained the reasons behind business developments at Daimler Trucks in 2009. He also talked about Daimler Trucks’ strategy for effectively positioning itself for a successful future in a difficult global market, as well as the division’s plan to emerge from the crisis even stronger than before. Regarding the outlook for the future, Renschler said, “Our industry has always been very cyclical, which is why we are prepared to deal with market declines. Nevertheless, it’s clear that truck manufacturers will be hit particularly hard when the world economy contracts in a more dramatic manner than ever before. Conversely, however, it’s also true that when the economy recovers, truck manufacturers also recover, because you can’t have economic growth without freight transport or trucks.”

Effective cost and efficiency management in the crisis year

The market downturn in 2009, which far exceeded normal cyclical fluctuations, led Daimler Trucks to significantly intensify its cost management measures and launch new efficiency programs. These measures are based on the Global Excellence Program. In addition to the consistent emphasis on making the division resistant to cyclical effects, the Global Excellence Program includes measures for the active management of costs and efficiency, the penetration of new growth markets, and the development of future product generations and technologies.

The company’s focus in 2009 was on the two pillars of efficiency and resistance to cyclical effects. The high degree of flexibility in Daimler Trucks production plants in Germany proved to be effective. These plants can deal with a market contraction of up to 30 percent without having to resort to any special measures. Renschler emphasized that “the great flexibility of our plants combined with short-time work allowed us to avoid layoffs in Germany and at the same time retain our permanent employees and their know-how, despite an almost 50-percent drop in demand. We do not have such opportunities in other markets, which is why personnel reductions became unavoidable elsewhere, for example in the U.S.”

In 2009, the effects of the economic crisis were dramatic in the triad and initially in the BRIC countries (Brazil, Russia, India, and China). Sales of new trucks declined severely in Russia, for example. However, developments in Russia are once again pointing toward growth.  These new growth markets have increasingly developed into a counterweight to the triad regions, and they will post stable growth momentum this year. China, for example, expects its market to rise to record levels this year, while Brazil is employing targeted incentives to stimulate its domestic market. Mercedes-Benz do Brasil, for its part, is investing in the expansion of its production capacities and in local research and development.

Daimler Trucks is rigorously continuing its efforts to penetrate the BRIC markets, because it already sells one out of two trucks outside of the triad markets and around 13 percent of its sales take place in the BRIC countries. Andreas Renschler says: “At Daimler Trucks we are taking a customer-and market-driven approach toward penetrating these growth markets. The shape that our presence in a market takes — whether we penetrate the market through a partnership, a joint venture or a holding company — depends on the conditions in the country in question. We respond very individually to market conditions, and thus we make sure we have comprehensive know-how regarding each market.”

Daimler Trucks invests heavily in new products. The company did not cut its investments in research and development in 2009, which remained at the 2008 level of around one billion euros. Not only is Daimler Trucks investing in the successor generations of the current models in its portfolio; the development of new environmentally friendly drive system technologies and vehicles is also moving ahead at full steam in 2010.

In the process, the company has taken a big step forward in terms of taking advantage of economies of scale. The backbone of the system is a global modular truck system that is defined across brands, from which future components, powertrains and products are developed and can be adapted to market-specific requirements.
The focus in all of this is always on the customer, who receives customized products or components that are in line with his or her needs.

Renschler also spoke about the product offensive at Daimler Trucks. “Our agenda includes many new trucks, the development of alternative drive systems, and compliance with the worldwide emission standards. Running all of these projects in a difficult economic environment is a big challenge for us. It would, of course, be easier to just cancel projects. But that would be the wrong step to take, because the global product offensive will provide us with the competitive edge we need in the future.”

Extension of leadership in global truck business in 2010