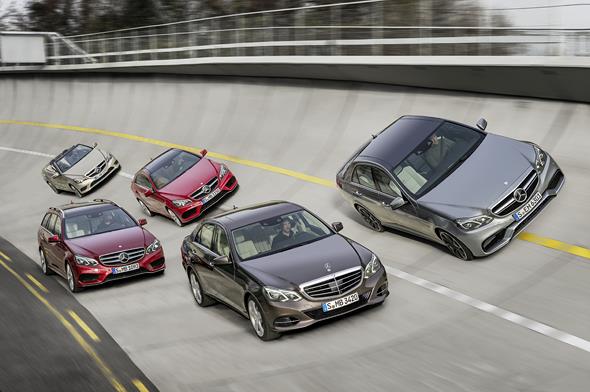 Stuttgart – Having already reached sales of more than 13 million vehicles in its segment, the E‑Class will be celebrating its debut in its latest guise on 14 January at the International Auto Show in Detroit.  Saloon, Estate, Cabriolet and Coupé models have all been completely revised and boast a range of exceptionally efficient engines, new assistance systems and a new design idiom.  Of interest not only to the US market will be the E 63 AMG models, now available for the first time in a 4MATIC version as well.

The new E-Class is the forerunner in the most comprehensive model initiative to date in the executive and luxury segment: joining the E-Class, with a world premiere towards the middle of the year, will be the new S-Class.

The initiative is being flanked by the launch of the new four-door coupé, the CLA, which aims to broaden the appeal of the brand to attract younger customers. This car, too, will be celebrating its debut in Detroit and will shortly also be joining the product line-up in the US.

The new E-Class family sees numerous technical innovations for the first time, while it also demonstrates clear advances in terms of efficiency, ecology and dynamic driving. Taking the lead here, amongst other features, are a series of new and powerful BlueDIRECT four-cylinder petrol engines with direct injection technology, a new high-performance, high-torque and yet
fuel-efficient six-cylinder unit, as well as even more efficient diesel engines.

All models in the E-Class family are equipped with either new or optimised assistance systems that will be found in the forthcoming S‑Class. They blend comfort and safety in a way that Mercedes-Benz calls “Mercedes-Benz Intelligent Drive” and include systems that, for the first time, make it possible to prevent accidents with crossing vehicles or pedestrians; Active Lane Keeping Assist, which can also help prevent accidents with oncoming traffic; and anti-dazzle continuous main-beam headlamps (Adaptive Highbeam Assist Plus). All of which help to underline the pioneering role of Mercedes-Benz when it comes to safety.

The trendsetting engineering of the E-Class is also reflected in its design. This has been reworked in intelligent style by Mercedes-Benz and is thus now firmly embedded in the company’s current design idiom.

Although the equipment and appointments packages have been significantly enhanced, the prices for the E-Class models remain at nearly the same level as for their predecessors. Some individual models are even available at a lower price than their predecessors.

More than 13 million vehicles sold in the E-Class segment

Dr Joachim Schmidt, Member of the Board of Management Mercedes-Benz Cars responsible for Sales and Marketing: “With more than 13 million vehicles sold, the E-Class segment represents one of the key building blocks of our Mercedes-Benz 2020 growth strategy.

The launches of the new E-Class family and the S-Class during 2013 mark the beginning of our most comprehensive model initiative ever in this segment and once again set clear benchmarks in terms of safety, design, quality and efficiency. The letter “E” thus continues to represent the position of leadership in this demanding segment.”

The most successful Mercedes-Benz E-Class Saloon so far was the model series W 123, of which 2.4 million units were sold over the nine-year period that this model was built, from 1976 until 1985.

Over the years, the Mercedes-Benz E-Class has been the recipient of numerous awards for design, engineering, quality and innovations. The first half of 2012 saw the current model series add further significant awards to the list:

The new E-Class, which will be celebrating its world premiere at the Auto Show in Detroit on 14 January, continues on this successful course. The Mercedes-Benz press conference will be transmitted live from the NAIAS 2013 on Monday 14 January on www.daimler.gomexlive.com. The live stream may be used copyright-free and included as part of editorial website content via embed code.