Cross-traffic, cyclists, crossing pedestrians, perhaps engrossed with their smartphones, mothers with buggies, children playing – city traffic places demands on drivers in many different situations while at the same time posing risks of accident.

Plenty of scope for assistance systems that support the driver in addition to making urban driving safer and less stressful. On the way to that goal, Daimler researchers have achieved a breakthrough in connection with the UR:BAN research initiative. 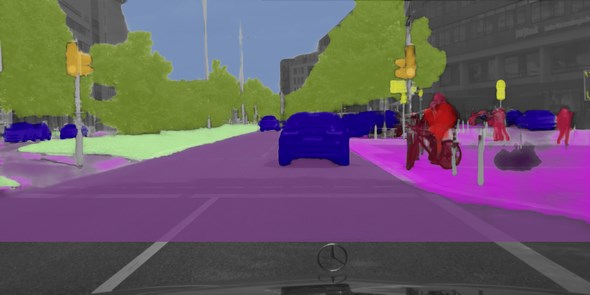 Researchers in the “Environment Sensing” department showed their system thousands of photos from various German cities. In the photos, they had manually precisely labelled 25 different object classes, such as vehicles, cyclists, pedestrians, streets, pavements, buildings, posts and trees.

On the basis of these examples, the system learned automatically to correctly classify completely unknown scenes and thus to detect all important objects for driver assistance, even if the objects were highly hidden or far away.

This is made possible by powerful computers that are artificially neurally networked in a manner similar to the human brain, so-called Deep Neural Networks.

Consequently, the system functions in a manner comparable to human sight. This, too, is based on a highly complex neural system that links the information from the individual sensory cells on the retina until a human is able to identify and differentiate an almost unlimited number of objects.

Scene labelling transforms the camera from a mere measuring system into an interpretive system, as multifunctional as the interplay between eye and brain. Prof.

Ralf Guido Herrtwich, Head of Driver Assistance and Chassis Systems, Group Research and Advance Development at Daimler AG: “The tremendous increase in computing power in recent years has brought closer the day when vehicles will be able to see their surroundings in the same way as humans and also correctly understand complex situations in city traffic.”

To advance this system quickly Daimler continues researching together with partners to achieve the vision of the accident-free driving.

In addition to a real-time demonstration of scene labelling, another test vehicle showed imaging radar systems and the new, fascinating possibilities they offer in urban environments.

It was shown that radar sensors are now capable of comprehensively resolving and visualising not just any dynamic object, but also every static environment.

The particular properties of radar waves mean that the system can also function in fog and bad weather. Moreover, the so-called micro-doppler allows the signatures of moving pedestrians and cyclists to be unambiguously classified.

In addition, it was demonstrated at the trade fair how environment data from radar and camera sensors are merged by sensor fusion to form an environment model.

The model takes account not only of the locations and speeds of the various road users, but also of attributes such as the type and size of the objects.

The environment model also makes allowance for incomplete sensor data as well as missing information, as is typically the case in actual road traffic.

The third test vehicle included a system for the detection, classification and intention identification of pedestrians and cyclists.

Similarly to a human driver, this system analyses head posture, body position and kerbside position to predict whether a pedestrian intends to stay on the pavement or cross the road.

In dangerous situations, this allows an accident-preventing system response to be triggered up to one second earlier than with currently available systems.

A further highlight that was demonstrated was how radar- and camera-based systems can make lane-changing in city traffic safer and more comfortable.

Following a command from the driver, this system provides assisted lane-changing in a speed range between 30 and 60 km/h. The system senses the environment as well as the traffic in the lanes.

The situational analysis predicts how the scenario will develop and then enables the computed trajectory. This is followed by assisted longitudinal and transverse control for changing lane.

The driver can tell intuitively from the instrument cluster whether or not the requested lane change can be executed by the system.

After the change of lane has been successfully completed, longitudinal control with lane-keeping function is resumed. The driver at all times has the option of overruling the system by intervening with the steering, accelerator or brakes.

The fifth test vehicle showed the potential for predicting driver behaviour in relation to planned lane changes or changes of direction.

With regard to an imminent change of lane, for example, glances over the shoulder are linked with driving parameters that have already been sensed.

A likely change of direction can be predicted from the interplay between steering movement, reduction of speed and map information.

In the demonstration, the direction indicator was then automatically activated to inform other road users as early as possible.