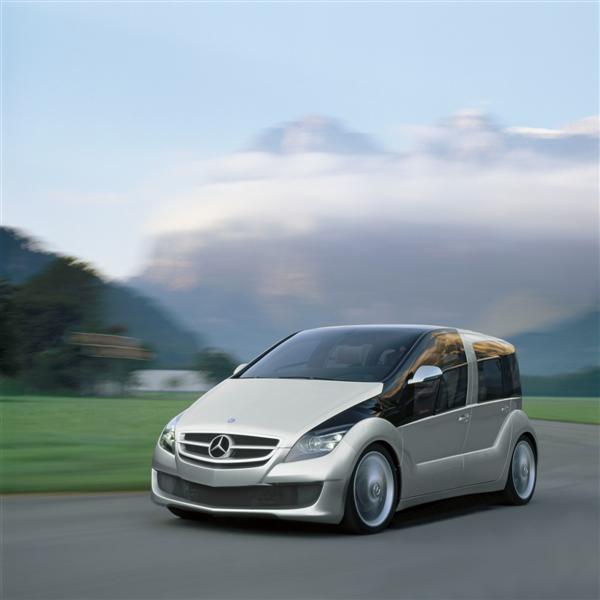 F 600 HYGENIUS: premiere at the Tokyo Motor Show: Power, comfort and zero emissions: Mercedes-Benz presents new research vehicle with fuel cell drive.
Stuttgart
The new F 600 HYGENIUS is the latest in the series of research vehicles from Mercedes-Benz that point the way forwards for the future. Powered by a zero-emission fuel cell drive with an output of 85 kW/115 hp, the compact-class car with a family-friendly design consumes the equivalent of 2.9 litres of fuel per 100 kilometres and has an operating range in excess of 400 kilometres. “This represents a major step towards bringing the fuel cell drive up to full production maturity, a goal that we aim to achieve some time between 2012 and 2015,” remarks Dr. Thomas Weber, DaimlerChrysler AG Board Member for Research & Technology and Head of Development at the Mercedes Car Group. “By developing the fuel cell, we are creating a new basis for supplying energy in tomorrow’s vehicles which will make a further lasting improvement to their environmental compatibility.” In addition to the fuel cell technology, the Mercedes-Benz research vehicle also showcases an operating concept with virtual displays, new-style seats and other pioneering technologies designed to enhance safety and passenger comfort.
Fuel cells use the chemical reaction between hydrogen and oxygen to generate electrical power in a process that produces no emissions. Professor Herbert Kohler, Director of Vehicle Body and Drive Research at DaimlerChrysler: “We have made some crucial advances to this trailblazing technology. The fuel cell in the F 600 HYGENIUS is around 40 per cent more compact than previously, runs more efficiently than ever and is notable for its good cold-start characteristics. This has been achieved thanks to the inclusion of innovations such as the redesigned fuel stacks, an electric turbocharger and a new humidification and dehumidification system.”

The F 600 HYGENIUS achieves a maximum power output of 85 kW/115 hp combined with a peak torque of 350 Newton metres. The fuel cell drive alone generates a constant power output of 60 kW/82 hp and a torque of 250 Newton metres. With any surplus energy being stored in a powerful lithium-ion battery, the system acts in a similar fashion to a hybrid drive, selecting the best power source to use depending on the driving situation. When parking or manoeuvring, for instance, the electric motor draws its power from the battery alone, while both fuel cell and battery feed it with energy in unison when the vehicle is accelerating. The electric motor doubles as a generator that charges the battery during vehicle braking by recuperating drive energy.

Mobile power station supplies energy both at home and away

As well as generating clean energy to drive the research vehicle, the fuel cell can also serve as a mobile power source: its 66 kW of electrical power would be quite sufficient to keep several detached houses supplied with power.

Passengers aboard the F 600 HYGENIUS also stand to benefit from its extraordinary energy reserves: the cup holders which use electrical power from the fuel cell to keep drinks chilled or hot are just one example of this. The fuel cell’s energy also allows electrical devices to be operated anywhere at the standard voltage level – following onboard conversion – granting the occupants total independence from the mains network on family outings or business trips. All they have to do is connect the device to a power socket in the tailgate.

The four-door F 600 HYGENIUS also makes a mark for itself when it comes to comfort and versatility. Despite the body’s compact length of just 4348 millimetres, the levels of space inside are impressive, even by luxury-class standards. The distance between the front and rear seats – a useful indicator of the freedom of movement and spaciousness – measures 945 millimetres, and can be extended by up to a further 400 millimetres thanks to the sliding design of the individual rear seats. This puts the research vehicle’s comfort dimensions on a par with those found in exclusive luxury saloons.

Seating concept offering families the versatility they are looking for

A host of ingenious design solutions make the F 600 HYGENIUS an ideal family car. Take the child and family-friendly design of the seats, for example: the front passenger seat and the individual seats in the rear incorporate a new technology allowing the backrest to be used either way around. The backrests can be swung forwards and reversed in such a way that ISOFIX child seats can be locked into place on the seat cushions in a rearwards-facing position. The face-to-face seating arrangement boosts safety at the same time as making it easier to attend to young children en route, with the additional fore-aft and crossways adjustment of the rear seats allowing infants to be reached easily from the nearside rear seat.

Mercedes-Benz has devised a revolutionary new seat for the driver featuring a two-piece backrest cushion that follows the upper body movements and minimises the strain on the intervertebral discs, regardless of the seat position. If, for instance, the driver tilts the seat further back, the lower section of the backrest cushioning automatically pivots forwards to support the pelvic area.

Video cameras for leaving the vehicle and changing lane safely

Cameras integrated into the housings of the exterior mirrors keep an eye on traffic to the side of and behind the F 600 HYGENIUS, even when it is parked. If another car or a bicycle is approaching from behind, the system will automatically disable the doors for a brief period to avoid the risk of a collision when they are opened. Out on the road, the video system monitors the blind spot of both exterior mirrors and warns drivers about to change lane if a vehicle is approaching from behind. 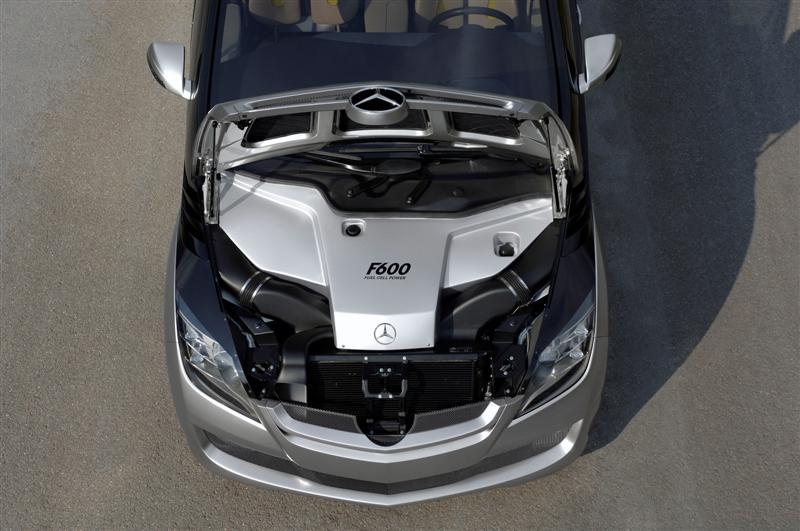 The tailgate of the F 600 HYGENIUS has a two-piece design offering maximum practicality. If space is at a premium, the tailgate’s lower section is automatically folded inwards so that the tailgate swings through a much tighter arc as it opens. As this is happening, the rear bumper drops down, pulling out the floor plate of the luggage compartment at the same time to simplify loading. The front doors of the latest Mercedes research vehicle also boast a technology that is designed to make getting into and out of the vehicle as easy and convenient as possible when parked in tight spaces: the doors swing upwards at a slant, meaning that they take up less space to the side when opening than conventional car doors.

In order to allow the vast multitude of functions to be operated quickly, intuitively and, most importantly, safely, the engineers at Mercedes have devise a concept based on the proven operating principle used in the new Mercedes-Benz S Class. This concept helps to minimise driver distraction, which in turn benefits driving safety. As in the Mercedes flagship model, buttons in a control panel in the middle of the dashboard serve to operate the most commonly used systems, such as the radio, air conditioning, car phone and navigation. These buttons can be easily reached by both the driver and the front passenger.

For advanced operating functions, the COMAND controller developed for the new S-Class extends out of the armrest between the front seats and allows straightforward navigation through the COMAND system’s control menus.

The images on both high-resolution colour displays in the dashboard are diverted by means of two mirrors before being projected to appear at a point 1.40 metres in front of the driver. This leading-edge virtual display technology from Mercedes-Benz represents a key improvement to driver-fitness safety as it shortens the time required for drivers to switch their gaze from what’s taking place on the road far ahead to the close-up instrument cluster display. Scientific studies have confirmed that, with this technology, the driver’s eyes do not have to constantly adjust between close and long range so they do not tire as quickly.

Headlamps with high-power LEDs enhance the driver’s night-time vision and help to avoid accidents. The LEDs are distributed over three projector modules: the light module in the centre is activated as required, depending on the driving situation, and also assumes additional functions, such as main beam, the Active Light System and the cornering light. All of the various lighting features are performed simply by switching individual LEDs on and off electronically, thereby eliminating the need for moving components, such as those currently fitted for the Active Light System.

The preventive occupant protection system PRE-SAFE, which was first premiered in the Mercedes-Benz S-Class in 2002, will continue to be expanded by Mercedes engineers in future. Two additional anticipatory protective functions have been incorporated aboard the F 600 HYGENIUS: active knee protection to brace the front passenger plus head restraints with automatically extending side bolsters to hold the head still. These new features are triggered together with the other PRE-SAFE measures prior to an impending accident, to prepare both occupants and vehicle for a collision.