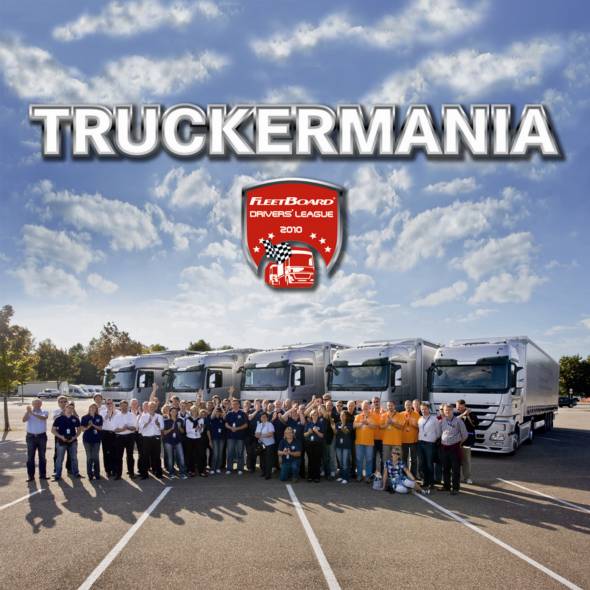 Under the motto TRUCKERMANIA, the economical driving competition will be held in international country leagues from June 1st – 30th, 2010.
Stuttgart – Registration for this year’s FleetBoard Drivers’ League is now open at www.driversleague.com. In the international truck drivers’ competition, held June 1st – 30th, 2010, the goal is to master each trip and be more economical than the national competition.
The 8th annual Drivers’ League promises exhilarating moments and stirring successes with 9 countries holding national Drivers’ Leagues at the same time. The participating countries are Germany, Switzerland, the Netherlands, the United Kingdom, Italy, Poland, the Czech Republic, Romania and South Africa. For four weeks every trip counts for the participants. As part of their daily business, the drivers’ and companies drive highly efficiently to win the title in their national league. The placement in the national rankings depends on the driving style grade from the FleetBoard Performance Analysis.
This is composed of various factors such as: preventative driving style, speed change as well as braking behaviour and, under consideration of the degree of difficulty, provides an objective evaluation regarding the economical handling of the truck. The winners of the national competitions will enter the live finals in Germany. At this event, various driving exercises will determine which driver will be crowned the winner of the Driver Drivers’ League 2010. “Every year the FleetBoard Drivers’ League provides excitement for thousands of truck drivers and their companies with the unique TRUCKERMANIA atmosphere, which combines economical driving skills and sportsmanship,” said Markus Lipinsky, Managing Director of Daimler FleetBoard. Truck drivers from all over the world show that they safely and efficiently master their trips while saving their
companies considerable amounts of fuel and CO2 emissions. This year untiring driving skills can once again lead to amazing successes and prizes. Michelin is the main sponsor of this year’s FleetBoard Drivers’ League. Other partners are: UTA, Mercedes-Benz CharterWay, Mercedes-Benz Service, Mercedes-Benz Accessories GmbH, Voith Turbo, Fernfahrer, and Allianz. They will reward the best drivers with attractive prizes:
1st place: Experience the Truck Race in Spain up close with UTA. UTA will send two people to Madrid for one week. As well as the lively city in Spain, the winner will experience the finals of the European championship Truck Race on October 3rd, 2010. The trip includes flights and hotel stay including breakfast as well as two entrance tickets for the racetrack in Jarama.
The company with the winning driver will receive 3 months free driving on an Actros articulated truck including FleetBoard Vehicle Management, sponsored by Mercedes-Benz CharterWay.
2nd place: DTM VIP tickets for the final race at Hockenheimring including overnight stay for 2 people.
3rd place: Gift set from the Mercedes-Benz Accessories GmbH Trucker Selection. In addition, Michelin will present companies reaching places 1-3 with a  set of tyres (6 tyres) with the tread patterns MICHELIN X® ENERGY™ SAVERGREEN XF and XD. These are particularly economical due to their low rolling resistance and good kilometre performance. Ranks 4 to 25 can look forward to Allianz travel equipment for truckers, sponsored by Allianz.
Tags
truckermania