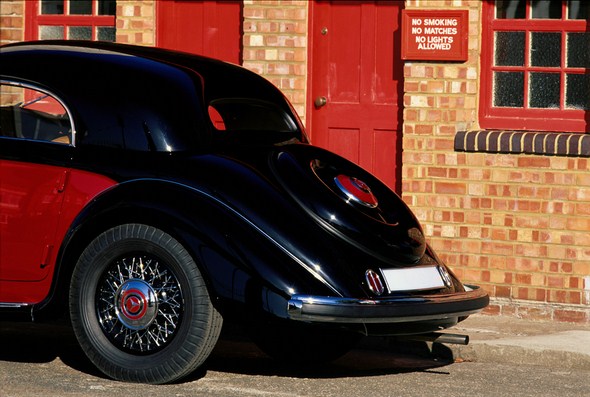 75 years ago – from 20 February to 7 March 1937: the Mercedes-Benz 320 (model series W 142) was presented at the Berlin Motor Show. Its outstanding features included high levels of spaciousness, comfort and convenience.

75 years ago – from spring 1937: the Mercedes-Benz W 125 became the brand’s Formula racing car for the 1937 motorsport season. It proved extremely successful in enabling Rudolf Caracciola to pick up the title of European Champion, a feat comparable to winning the World Championship by today’s standards.

Event: Mercedes-Benz Classic at the Rétromobile Motor Show in Paris, from 1 to 5 February 2012.

March
75 years ago – spring 1937: some 29 Volkswagen prototypes were produced at the Sindelfingen plant. The vehicle known as the VW 30 was the forerunner to the subsequent “KdF” car, and therefore the “Beetle”.

50 years ago – from 15 to 25 March 1962: the 300 SE Coupé and Cabriolet models (W 112/3) were presented at the Geneva Motor Show. Both cars had air suspension, automatic transmissions and four disc brakes as standard, just like the Saloon on which they were based.

25 years ago – from 5 to 15 March 1987: the 124-series Coupé was presented to the public at the Geneva Motor Show. Today, these models are among the most sought-after examples on the classic car scene.

April
25 years ago – April 1987: the last of the first generation of Mercedes-Benz standard buses rolled off the production line at the Mannheim plant. Today’s urban buses would not have been possible had it not been for the public local transport concept which was introduced, standardised and tailored to the needs of transport operators from 1967 with the launch of the O 305.

July
50 years ago – July 1962: the Unimog model U 65 (model series 406) is launched as a more powerful and generally more generously proportioned variant, particularly suitable for use as a trailer towing vehicle.

September
10 years ago – from 12 to 19 September 2012: Mercedes-Benz presented the second generation of the Actros heavy-duty truck at the IAA Commercial Vehicle Show. The new model series featured a high-quality interior, increased payload and even more powerful engines.

October
Event: Mercedes-Benz Classic at the final of the FHR Long-Distance Cup, Nürburgring, from 6 to 7 October 2012.

November
25 years ago – from 24 to 28 November 1987: Mercedes-Benz presented the new Unimog U 900 at the Agritechnica Agricultural Exhibition in Frankfurt am Main, featuring a newly-developed cab as well as revised technology.
Event: Mercedes-Benz Classic at the London to Brighton Veteran Car Run, from 3 to 4 November 2012.

25 years ago – 4 December 1987: generally considered as the forerunner to today’s vans, the MB 100 D van was presented in Ulm. Manufactured at the Spanish Mercedes-Benz plant in Vitoria, it differed from all of the company’s other vans with its cab-over-engine design and front-wheel drive.