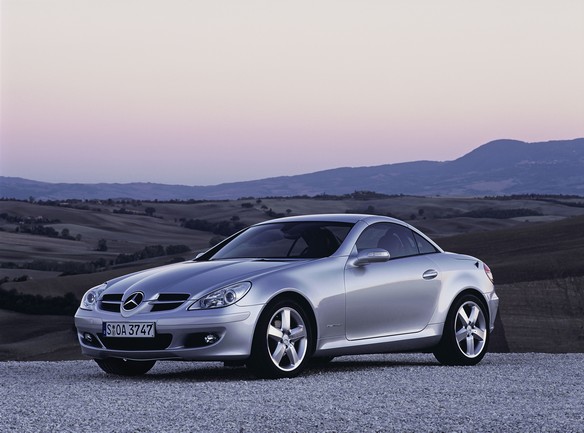 One of the most exciting and successful sports cars is now ready for Round Two: Mercedes-Benz unveils its new SLK-Class.

More attractive, more powerful and sportier than its predecessor, this appealing two-seater will be celebrating its European market launch in March 2004. The new model offers a choice of three new engines with a performance range extending from 120 kW/163 hp to 265 kW/360 hp. This includes – for the first time in this vehicle class – an eight-cylinder supplied by Mercedes-AMG. The SLK 350 is powered by a new 200 kW/272 hp V6 engine delivering dynamic driving pleasure.

The second generation of this two-seater again captivates the eye with its sophisticated design featuring details reminiscent of Formula motor racing. This quality enables the SLK to uphold its reputation as a trendsetter and a tech-nology leader among the sports cars in this class. A further development of its vario-roof transforms this roadster into a coupé in just 22 seconds. The range of standard equipment also includes head-thorax sidebags, adaptive front air-bags and two-stage belt force limiters. Mercedes engineers have added even more sports refinement to the suspension, steering and manual transmission.

As a global first, Mercedes-Benz is offering the AIRSCARF neck-level heating system. This delivers a flow of warm air from the headrests at the touch of a button, thereby enabling SLK occupants to keep the roof down even when there is a chill in the air. This extends the top-down driving season to the full calendar year. Automatic climate control, bi-xenon headlamps with cornering light, COMAND and the unique 7G-TRONIC 7-speed automatic transmission add to the technological innovations which can now be supplied as options to the SLK-Class for the first time.

The new Mercedes roadster is now taking the place of its predecessor, a car which has delighted more than 308,000 owners since it first appeared in the autumn of 1996. Worldwide, this model holds the number one position in this market segment and has already established itself as a symbol for the new, dynamic brand image of Mercedes-Benz.

The design and technology employed in this second generation of the SLK-Class place even greater emphasis on sports performance. With more powerful engines, redesigned suspension, direct steering feel and a responsive six-speed manual shift system, the new model offers an even more athletic driving experience than ever before. The body size has grown by 72 mm in length and 65 mm in width, affording driver and passenger more space and even higher standards of comfort than the previous model.

From an initial glance, the design of this car reflects the sporty and altogether more powerful character of the new SLK-Class. A long bonnet, steeply raked windscreen, wide doors and short boot are the typical characteristics of a roadster and the new SLK underlines these even more emphatically than its predecessor. The extra 30 millimetres on the wheelbase, the distinctive arrow-like tapering at the front and rear and the wedge-shaped silhouette all contribute to this impression.

With attractive geometry details like the strikingly sharp nose section, special fins on the radiator grille and the twin exhaust system reminiscent of a racing car, the design of the new SLK recalls the fact that this two-seater is the child of a company with a long and illustrious tradition of sports car production.

The interior has also been completely redesigned and substantially upgraded with a careful choice of materials. The design concept is characterised by switches, push-buttons and decorative elements with silver-coloured surfaces, creating a sharp contrast with the black surfaces of the instrument panel. Customers who opt for a leather interior can select from a range of six colours to create their personal choice of interior look.

Body: best in its class for aerodynamics and luggage compartment volume

The beautifully shaped body of the new SLK also stands out for its technical merits: no other roadster in this class matches its superb Cd value (0.32), its exceptional standards of body strength, an equivalent fuel tank capacity (70 litres) or a comparable size of luggage compartment (300 litres when vario-roof is closed).

The innovative vario-roof with which the Mercedes sports car set new trends back in 1996 has been further improved by the engineers at the Sindelfingen plant and its technology has been honed. It opens and closes faster than ever before and thanks to a pivoting rear window it now takes up even less space in the luggage compartment. When the vario-roof is open, the luggage compartment capacity is 208 litres (applying the VDA measurement method) – this is 63 litres more than that of the predecessor model. For the first time ever, as an optional feature available on request, the vario-roof can also be actuated using the remote control on the vehicle key.

An ultramodern design procedure, a 40 % increase in the use of high-tensile steel alloys and many other additional measures allow the new SLK-Class to surpass the high safety standards set by its predecessor. The occupant protection systems respond to the prevailing situation: for the first time, Mercedes-Benz is using adaptive airbags in this model range, which deploy in two stages depending on the severity of the accident.

The belt force limiters, now standard equipment, also function in two stages and adjust to the severity of the accident. In instances of side impact, recently developed head-thorax airbags spring into action and protect the passenger’s head and upper body. A special sensor also triggers the side airbags and both belt tensioners in the event of the vehicle rolling over. Robust steel tubes in the A-pillars and solid roll-over bars behind the seats offer additional protection in accidents of this kind. 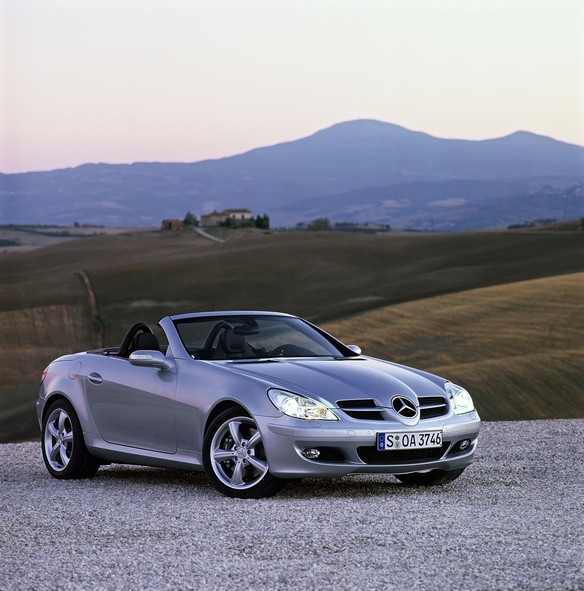 Engines: Up to 25 more performance with reduced fuel consumption

The range of engines available with the new SLK-Class is also unique for this market sector. Mercedes-Benz is the first carmaker in this segment to respond with an eight-cylinder engine to the wishes of performance-minded car drivers. The new SLK 55 AMG now sets a new benchmark in terms of power (265 kW/360 hp), torque (510 newton metres) and acceleration (0-100 km/h: 4.9 seconds). The V8 power unit is twinned as standard with the recently developed 7G-TRONIC seven-speed automatic transmission controlled by the driver using gearshift buttons on the steering wheel.

Mercedes-Benz has developed a new six-cylinder engine with around 25 percent more power (200 kW/272 hp) and 13 percent more torque (350 newton metres) for the SLK 350. The four-valve engine is one of the most powerful V6 units in its displacement class and its sporting character can be clearly distinguished by its powerful, vibrant engine note.

Maximum torque is available from an engine speed of just 2400 rpm and remains constant across a wide rev band extending up to 5000 rpm. This allows the car to be accelerated hard and permits rapid bursts of power. From a standing start, the SLK 350 reaches 100 km/h in just 5.6 seconds (with the 7G-TRONIC: 5.5 seconds) and accelerates from 60 to 120 km/h in 8.7 seconds (with the 7G-TRONIC: 5.1 seconds).

This is the first time that Mercedes-Benz has ever produced a V6 engine with variable camshaft control on intake and exhaust sides. The outcome is enhanced performance and torque combined with improved fuel economy. A two-stage intake manifold, “tumble” flaps in the intake ducts and an intelligent heat management system add to the technical distinguishing features of this new six-cylinder engine. When combined with the option of a seven-speed automatic transmission, the new SLK 350 only consumes a meagre 9.9 litres of Super grade fuel over a distance of 100 kilometres (NEDC total consumption figures) and therefore, despite a significant increase in performance figures, still manages to be some five percent more fuel-efficient than the previous SLK six-cylinder engine with a five-speed automatic transmission.

The 120 kW/163 hp engine in the SLK 200 KOMPRESSOR is also celebrating a premiere status in this range of Mercedes models. This is one of the new generation of four-cylinder engines from Mercedes-Benz featuring the unique TWINPULSE system which offers further advances in terms of performance, torque, smoothness and fuel economy. The TWINPULSE system combines a range of different technologies such as a compressor, balancer shafts, charge-air cooling, variable camshaft adjustment and four-valve technology. This high-tech package makes the new SLK 200 KOMPRESSOR eight percent more fuel-efficient than its equally powerful predecessor. The NEDC overall fuel consumption rating is just 8.7 litres of fuel over a distance of 100 kilometres.

As standard equipment, the SLK 200 KOMPRESSOR and SLK 350 are going to the starting grid with a six-speed transmission equipped with short, fast shift lever strokes and high levels of shift precision. As an option, the four-cylinder engine can be twinned with the tried and tested five-speed automatic transmission while the new six-cylinder can be paired up with the 7G-TRONIC seven-speed automatic transmis-sion. To reflect the dynamic character of the new SLK-Class, drivers can operate both automatic transmissions using gearshift buttons mounted on the steering wheel (as an optional extra) to select the desired ratio.

The distinguishing features of the sports-tuned suspension are the new design of three-link front axle, the rack-and-pinion steering unit and an even more powerful braking system than the previous model. Mercedes engineers have modified many details of the multi-link independent rear suspension unit and have adapted it to suit the increased track width of this new model. Depending on the choice of model, standard equipment in the new SLK-Class can include 16, 17 or even 18-inch alloy wheels. Low-slung sports suspension is also available as an option.

Longer and more often is the clear message from the new Mercedes-Benz SLK-Class to fans of top-down driving. AIRSCARF is a world first which allows drivers to lower the vario-roof even when there is a real chill in the air. Owners can now enjoy the true roadster experience more frequently than ever before. AIRSCARF is an innovative heating system located in the seat headrests: at the touch of a button, temperature-controlled air flows out of special vents in the headrests to keep the shoulders, neck and heads of SLK occupants warm on the road – acting just like an invisible scarf.

This new development is a unique option in the open-top car market. It operates in three stages and is equipped with an electronic control unit. It controls head-level heating to suit ambient conditions – depending on roadspeed and temperature – and adapts the fan speed continuously to ensure that the best possible distribution of hot air is delivered in any given situation.

The THERMATIC system represents a further innovation for perfect in-car climate control and is standard equipment on the SLK 350 and the SLK 55 AMG. For even more demanding car drivers, Mercedes-Benz has developed the THERMOTRONIC luxury climate control system, equipped with solar and pollutant sensors.

To keep SLK driver and passenger entertained and informed, optional equipment includes the Audio 20 CD stereo car radio, the Audio 50 APS with integrated colour display and a navigation system or COMAND APS, which features a DVD/CD player, colour display and separate DVD drive for the navigation system. Another option is the surround sound system with eleven speakers and a 380 Watt amplifier for that ultimate acoustic experience.

The new-generation C-Class from spring 2004