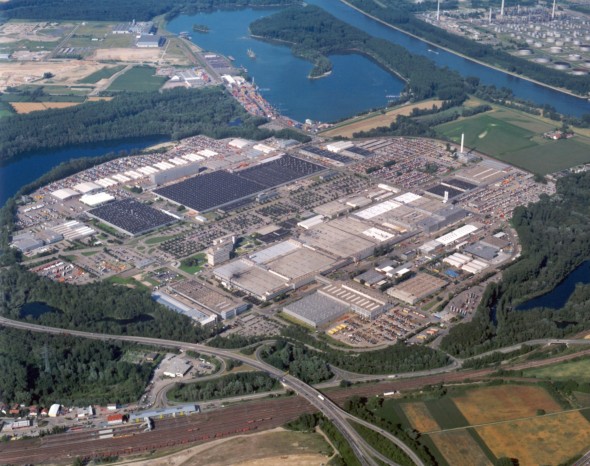 1960 decision to buy
The story of the Wörth plant begins.The first contact with Daimler Benz AG was established by the subsequent Wörth harbour Director Dr. Mohn. He pointed out the favourable infrastructure situation in the Upper Rhine area. This was received with great interest by the decision-makers in Stuttgart, but Stuttgart was “currently not interested in the acquisition of new industrial space”. A short while later, however, Daimler-Benz did show interest. After negotiations lasting several months, Wörth council permitted transfer of the former agriculturally used area to Daimler-Benz AG. The location is also known as the Wörth Island because the 1,500,000 square metre area lies in a former bend in the Rhine. First cut in the sod: March 1962.

1963 Start of production
“Day 1” is the 1st of October 1963. With a staff of around 100, production of the truck cabs begins. At this point, the primed shells are still delivered to the plants in Gaggenau and Mannheim for further processing. Within one year, 22,500 cabs are delivered. In December 1964, the first “interior fitted” and “finish-lacquered” cabs of type LP 314 are manufactured.

1965 Start-up of truck assembly
The first complete vehicle rolls off the assembly line on 14th July 1965. This is an LP 608 truck in the new lightweight class, assembled in pilot series, with 6 tons permissible overall weight and 80 hp. A prophecy from a local newspaper later proved to be true. It commented on a pile of broken indicator glass following a minor collision during the launch: “Broken crockery brings you luck!” After all, the factory grew to become the largest truck plant in Europe. In 1965, a total of 800 vehicles are manufactured in the South Palatinate and, by the end of the year, production of the model LP 608 is transferred completely from Mannheim to Wörth. At this time, the number of buildings on the factory premises is increasing, for example, the administration building, the training workshop and the catering operation. From 1966, the assembly of medium-heavy truck models and the CKD (Completely Knocked Down) vehicle dispatch all over the world starts. 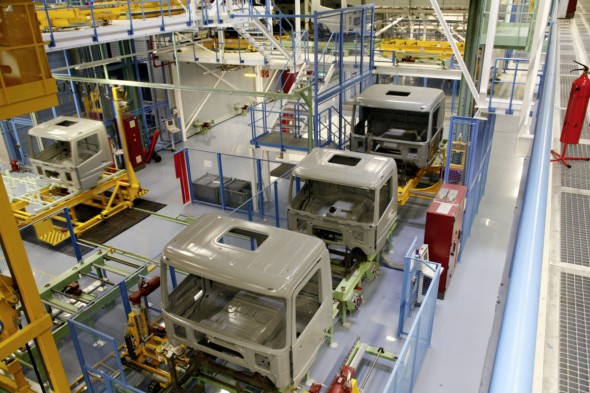 1973 Launch of the NG 73 series
NG steht für “Neue Generation”. NG stands for “new generation”. These trucks are produced with weights between 16 and 26 tons and are marketed as two- and three-axle vehicles in a total of 76 different versions. The concept of a modular system is implemented on an increasing scale: all models are built on the same basic type – this allows increasing use of standardised parts. The complete V-engine family OM 400 is also new. Characteristic of the new generation is the inimitable, large-surface forward control type cab, whose design is determined by its function, and which offers even more comfort. This was very well received precisely by professional truck drivers. For almost 20 years – up to 1992 – this series represents the Mercedes star on roads throughout the world.

1980 Launch of the NG 80 series
New generation focuses on economy. The beginning of the new decade sees the introduction of the new medium-heavy and heavy trucks of the new generation (NG 80). A great deal of attention was paid here to optimisation of the drive train. At the same time, economy became the most important virtue in the commercial vehicle sector; this was also because of the mineral oil price increases that had occurred in the meantime. 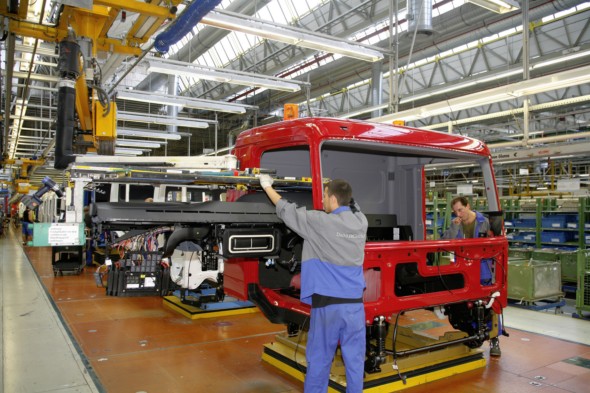 1984 Launch of the LK series
From 1984, the models in the new “Lightweight Class” (LK = “Leichte Klasse”) from 6.5 to 13 tons take the place of the most “senior” vehicles, the “Light Wörth Vehicles”. Ten different models of the LK are built, from the L 709 to the L 1320. With their consistently light design, these vehicles take on new tasks. They are not only at home in the distribution and building sectors, but are also used for long-distance transportation of heavy but less bulky goods. This is why a version with a sleeping cab was also designed. The new BR 300 straight-type engines are modern and ahead of their time.

1989 Central spare parts warehouse goes into operation
Spare parts service is relocated to Germersheim. As the number of versions and variety of special equipment increase, the demands on service and deliverability of spare parts also increase. At the former locations of the central spare parts warehouses in Wörth and Sindelfingen, the floor capacity is exhausted by the middle of the 80s. The solution is the founding of the central supply warehouse in Germersheim. Start of construction on the Insel Grün is 1984. Upon completion, Germersheim becomes the link between production plants and suppliers, and the 6000 regional sales and service support points throughout the world. 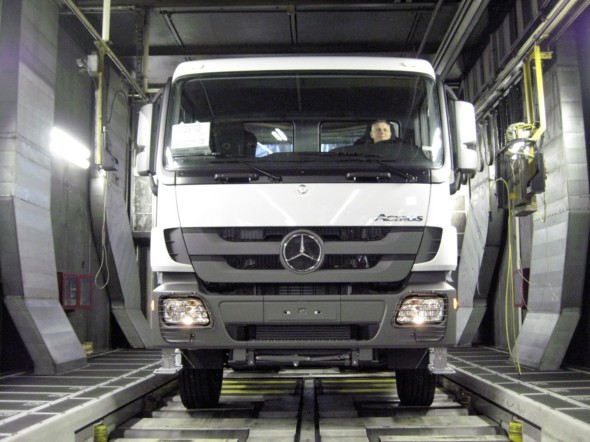 1992 The “Shell 2000” is created
Classical automation concepts are no longer suitable for mastering the complex tasks created by a constantly increasing number of versions and fluctuating unit counts. The solution is eventually found in an integratable overall system in which all cab types can be welded. The idea of a flexible shell system sees the light of day.

1995 The new cab interior fitting system comes into existence
New product considerations soon make it obvious that the cab interior fitting concept no longer adequately fulfils the requirements of newly developed products. On the 1st November 1995, the new area is opened. Improved production processes and optimised material flow have now been achieved for the interior fitting of the trucks.

1996/97 Launch of the ACTROS (road, building and special vehicles)
Just in time for the “100 years commercial vehicles” anniversary, Daimler Benz AG presents the new heavyweight series in the segment 18 to 40 tons under the name of ACTROS. This vehicle is designed for the segment long-distance haulage and building sites. This powerful and innovative truck ushers in a new era for the truck business. Control systems under the name of “Telligent” assist the truck driver in his work and make the vehicle even more economical, dependable and safe. By January 1997, the ACTROS had already been awarded the title “Truck of the Year 1997”.

1998 Launch of the ATEGO (light and heavy distribution operation)
ATEGO continues the success story. By the beginning of 1998, the ACTROS already has a “small brother” – the ATEGO. It follows in the footsteps of the LK, which has been produced for many years. In the course of a “Star Tour” from the plant in Wörth on the 9th of March 1998, the first 408 ATEGOs reach the dealers. The vehicles offers solutions in the light-duty distribution operation sector. Late in the year, the 6-15 ton ATEGO is followed at the IAA in Hanover by the market launch of the heavy-duty ATEGO (from 18 to 26 t). This segment was previously covered by the MK (medium class). From autumn 98, the ATEGO heavyweight rolls off the assembly line into heavy-duty distribution operation. The plant can now offer an excellent product range of new vehicles, from 6.5 to 41 tons. The product fireworks display closed in 1998 with a successful finale: the ATEGO heavyweight continues the success story of its “big brother”, the ACTROS, and also goes on to receive the coveted “Truck of the Year 1999” award in January 1999.

1999 ACTROS number 100,000 rolls off the production line
The new series Actros and Atego receive widespread acclaim on the market. The factory is buzzing. Demand for the new products rises continuously so that upward correction of the product program is required several times. 32 months after introduction to the market – in August 1999 – the forwarding agency Hartmann from Muggensturm acquires the 100,000th Actros from the Wörth assembly line. The same year, Daimler-Benz amalgamates with the American automobile manufacturer Chrysler and advances to a global player under the new corporate designation DaimlerChrysler.

2000 Technical sophistication for the vehicle
The era of “Mobile Business” begins.
Apart from the Telligent braking or switching systems in the Actros and Atego series, a further technological innovation is also introduced to the Mercedes truck: with Fleetboard – available ex works – the cab takes on a completely new function. In September 2000, the new Internet-based technology is introduced, which offers a series of options for the truck driver, scheduler and vehicle operator. 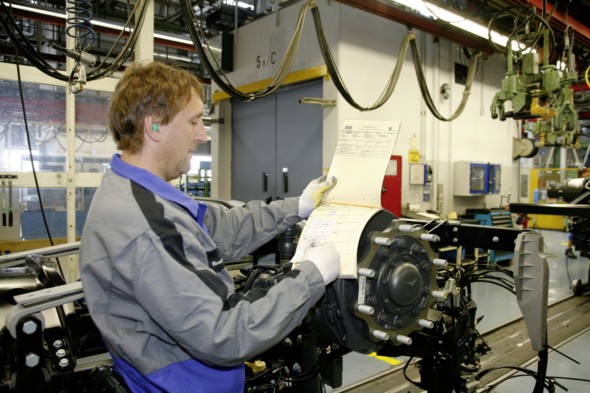 2001 Atego reaches the 100,000 mark
The Atego wastes no time before its first major anniversary. By 20th February 2001, 100,000 of these vehicles have already been assembled. The vehicle handover to the company Cordes & Gräfe in Bremen arouses great interest in the media. Since the market launch, a series of innovations, in particular, various Telligent systems, have been incorporated in the vehicle.

2001 Third time is a charm
The new series for middle-distance haulage, heavy-duty distribution operation and pool deployment moves into the pilot phase at the beginning of 2001. The semitrailer tractor, with a permissible overall weight of 18 tons, rolls off the assembly line in Wörth destined for countries in Western Europe at the start of 2002. Alongside this, the AXOR is also produced for the domestic market in the Turkish plant Aksaray in the Mercedes-Benz truck division.

2001 Industriepark Wörth GmbH
A new building is added to the plant. On 1st July 2001, three suppliers move into the first 5,000 square metre hall. With a workforce of 50, the companies Magna, Fritzmeier and Grammer supply the truck production with seats, bunks and wind deflectors. The owner of the hall is Industriepark Wörth GmbH, whose associates are the administrative district of Germersheim and the structural development organisation of the state government of Rhineland Palatinate. The parts delivery system “just-in-sequence” is the logical continuation of the “just-in-time” concept. Two further building phases follow.

2001: 200,000 Actros from Wörth
Following the production anniversary of the Atego in February 2001, the 200,000th vehicle rolls off the line after a manufacturing period of just under five years. “Big brother”, the Actros, from the Wörth production line. The semitrailer tractor is also designated the spearhead of the Mercedes-Benz truck range and, up to this period, is on the road in 98 different countries. 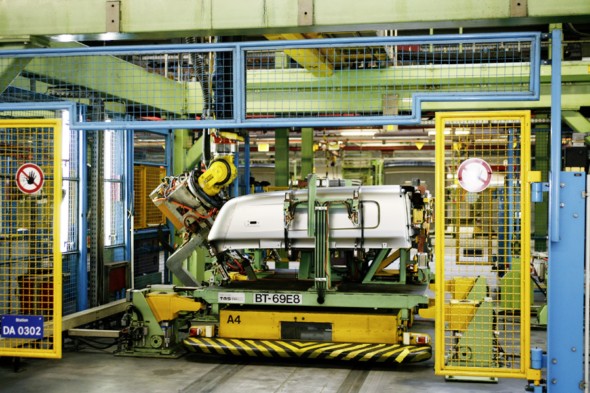 2002: Unimog relocates
On 26th August, a new chapter opens up for the Unimog: the “Multitalent”, which has been assembled for 51 years in Gaggenau, Baden, will now be produced in Wörth. “With this relocation, we are creating the basis for continuous economy and further process optimisation”, stated Dr. Klaus Maier, head of the business unit MB Trucks. In the first relocation stage, 380 employees from production and production-related areas are moved. The divisions Product Management, Development, Controlling and Sales, with a staff of around 300, follow in spring 2003. At this point, the Unimog assembly comprises two product lines: the off-road implement carrier U 300, U400 and U 500 for the target group local councils or building industry and the new, high off-road transport vehicle U 3000, U 4000 and U 5000 for fire brigades and disaster operations.

Actros model maintenance casts its shadow
The premiere of the “new Actros” is at the IAA (Commercial Vehicles) in September 2002. Sales begin in January 2003. The “new” vehicle now follows the in the footsteps of its 6-year older predecessor in all of the existing segments, such as long-distance haulage, heavy-duty distribution operation or tough deployment on the building site. The tried-and-tested technology of the predecessor phased out in 2003 forms the basis for the continued development of the extensive technical model nurturing measures and a completely new driver- and comfort-oriented interior.