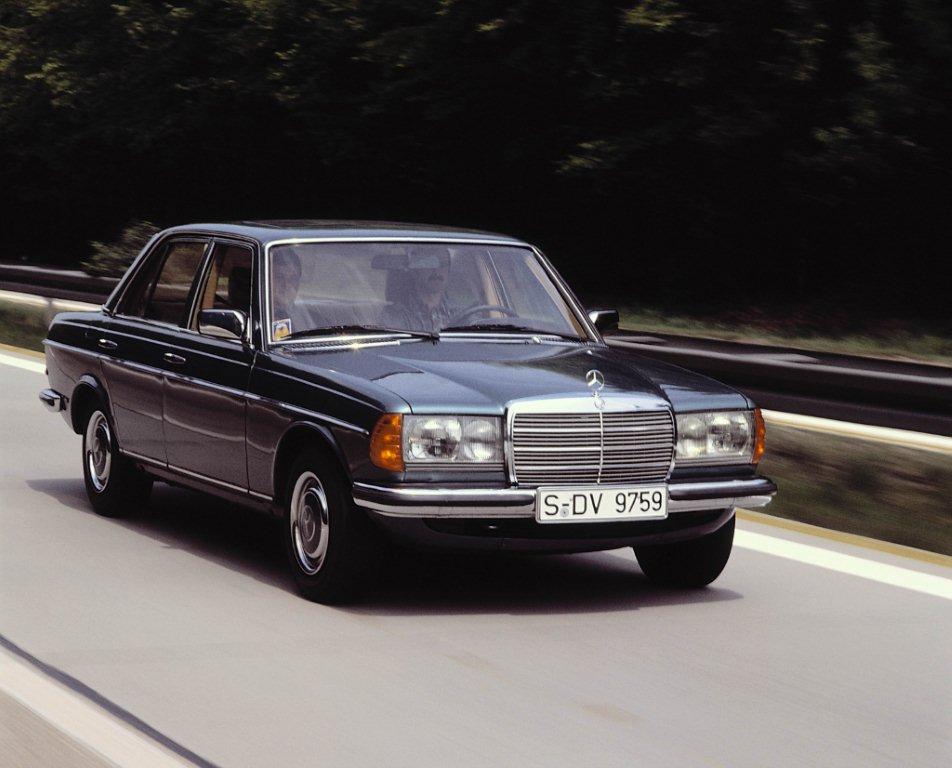 The series was first introduced to the public in January 1976. Its internal designation was 123. The saloon body variant was used for the premiere; in keeping with tradition it had a “W” put in front of it: W123. Preparations for production already commenced in summer 1975; in the end, production would run over ten years and bring forth a total of 2,389,140 saloons. The most successful model was the Mercedes-Benz 240D, of which, in all, 448,986 units were manufactured. There were also estates, coupés, and saloons with extended chassis.

Soon after the presentation the first year’s output was sold out; in 1976 young used cars of the series often fetched the price of a new car. Because of the long delivery times (among other reasons), Mercedes-Benz continued to build the previous model parallel to the new model for a whole year. 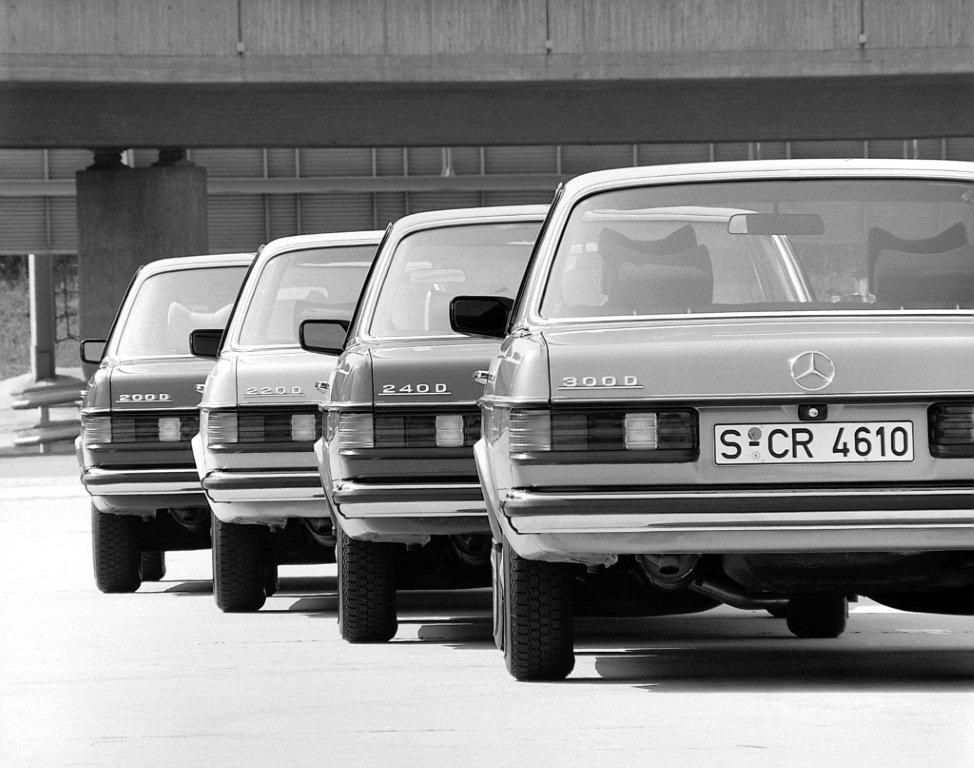 Classic body lines placed the 123 series in the tradition of its predecessor (the 115/114 series, dubbed “Stroke 8”); they gave the new car modern elegance, a spirited but dignified look, and natural authority. This was no automotive revolutionary strutting out before the public, but a completely mature car of the upper mid-size category in which up-to-date technology and tried-and-tested engineering merged with the brand values. Experts and customers alike gave the model a very warm welcome. In various ways the design of the 123 series pointed towards the future: technically, with numerous innovations in the area of safety; and aesthetically, with a design that took its cue from the looks of the new S-Class W116 and the R/C107 SL models. Expressions of this were the horizontally configured headlamps, for example, instead of the previous classic vertical lamps. The 123 series impressed with the high standard of its workmanship, its functionality, and particularly its wide range of body variants and engines. 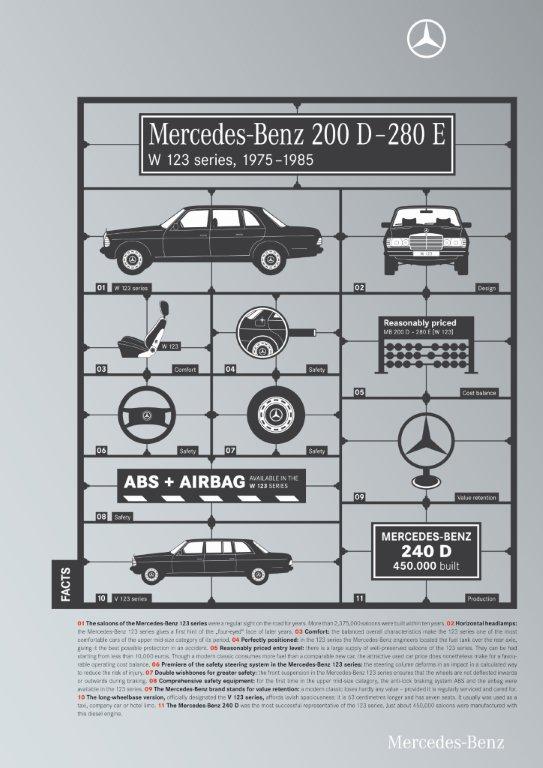 Gains in safety and comfort

Greater safety, improved comfort and better serviceability: these were the demands made of the Mercedes-Benz design engineers when the specifications for the new model series were drawn up in 1968. Almost eight years later it was apparent that the experts from Stuttgart had accomplished their task in a convincing manner. It was precisely the high level of safety engineering and the mature overall design that secured this model the attention of the trade press and the customers from the very beginning.

In developing the new model the design engineers set particular store on an even higher level of safety for the occupants. This was a topic of increasing debate in the 1970s and resulted in new regulations. On 1 January 1976, the Federal Republic of Germany made the wearing of seat belts for front seat passengers compulsory. In keeping with this trend, vehicle development focused on restraint systems and passenger compartments designed to minimise sources of injury. The engineers also considered integrating airbags, but these were not installed until 1982 as an optional extra in the 123 series. 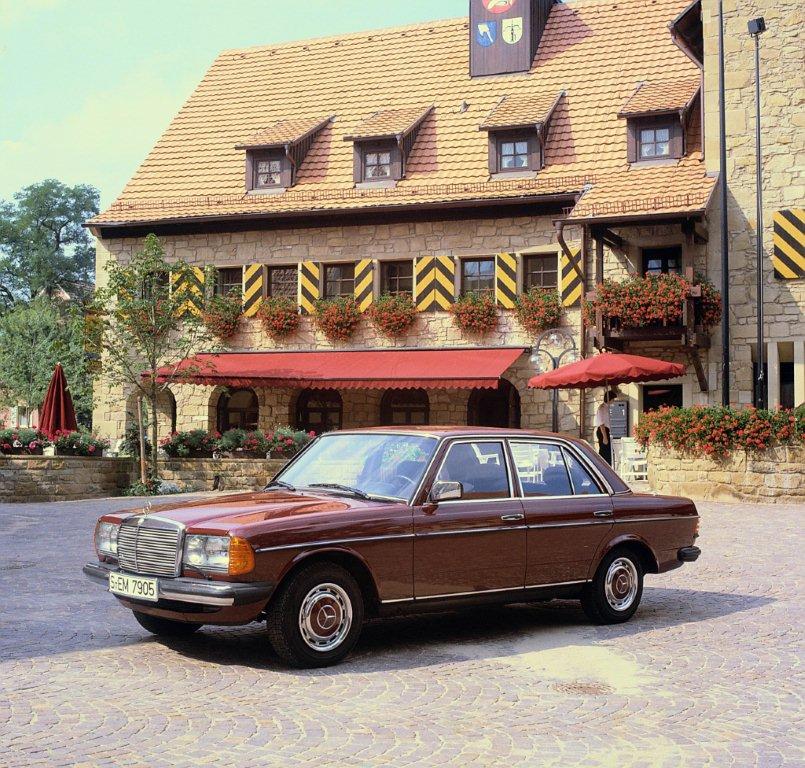 In technical terms the 123 series was an entirely new design, but was modelled both on its predecessor (115/114 series) and the S-Class of 1972 (116 series). From the “Stroke8” series the new model adopted in particular the engines, though with one exception: the newly designed 2.5-litre six-cylinder engine of the Mercedes-Benz 250 (M123). Features borrowed from the S-Class included the double-wishbone front suspension, in which the steering swivel axes of the wheels were aligned so that their imaginary extension coincided with the contact patch of the tyre on the roadway. This neutral setting (zero scrub radius) ensured that the wheels would not be deflected inwards or outwards during braking. The double-wishbone front suspension meant the elimination of the subframe, which had been introduced in the “Ponton” and presented the engine, transmission and front suspension as a unified whole. At the rear of the 123 was a diagonal swing axle, which had proven its value in the 115/114 series.

Occupant safety was served particularly by the combination of an even sturdier passenger compartment with large crumple zones: the front and rear ends of the vehicles were designed for controlled deformation in a collision to absorb appreciably more impact energy than was the case in earlier designs. The central section of the body, the so-called safety cell (patented in 1951 as “shape-retaining occupant compartment surrounded by energy absorbing zones at the front and rear”), had even more stability owing to the incorporation of stronger box sections in the roof frame and the six roof pillars. Stronger door beams ensured better impact protection.

The steering column of the 123 series was also optimised with a view to the driver’s safety: a corrugated tube connected the jacket and the steering gear with each other. In an accident, the corrugated tube could buckle in different directions. This reduced the danger of the steering column penetrating into the passenger compartment (lance effect). This and the rigid passenger compartment with crumple zones were inventions of Béla Barényi, the pioneer of passive vehicle safety at Mercedes-Benz. Installation in the 123 series marked the premiere of the safety steering column, patented in 1963, as a complete system. 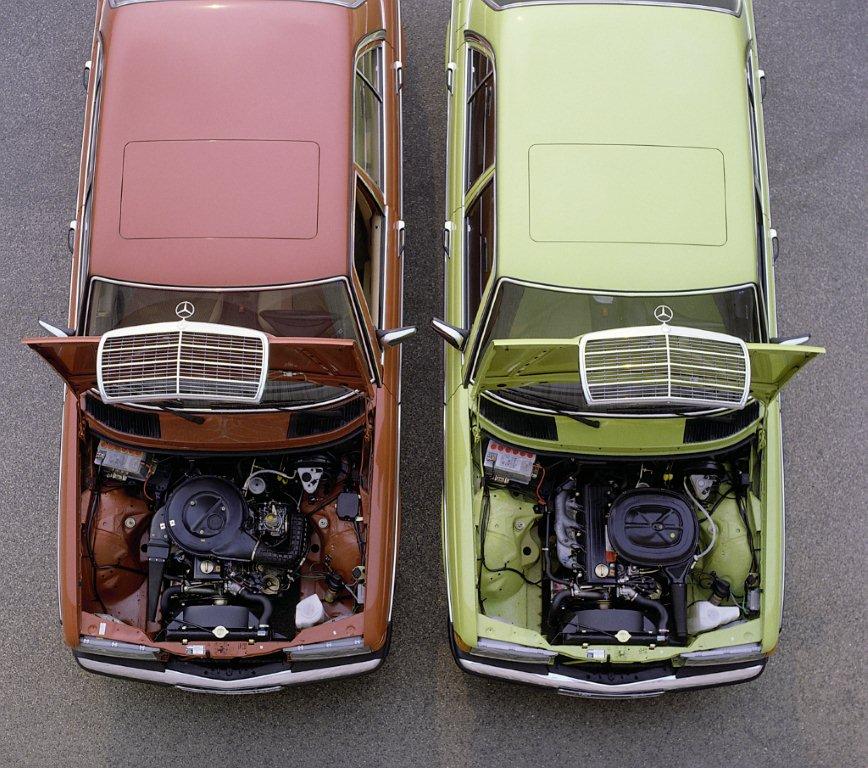 When Mercedes-Benz put the new intermediate class saloon on the market in 1976, its place in the current Stuttgart model generation was recognisable at a single glance. Like the S-Class W 116 and the SL of the 107 series, the W 123 had horizontal headlamps instead of the upright configuration of earlier days. The great majority of models illuminated the roadway with round headlamps in pairs behind a common rectangular lens. In 1976 this was the first hint of the “four-eyed” face of the 1995 E-Class (210 series) and its successor of 2002 (211 series). Only the top-of-the-range versions 280 and 280E had rectangular halogen wide-band headlamps at the premiere of the 123 series. In the 1982 facelift these rectangular lamps were then introduced for all versions and all body variants.

The lines of the saloon, from which the other body variants derived, impressed in 1976 by integrating up-to-date elements while paying regard to the established concept: draft designs during the planning period had put forward many variations for consideration, but neither the large roof-level rear spoilers nor the fastback concepts got beyond the drawing board. At the premiere of the new model the 123 series was offered not only as a saloon, but as a chassis too, in keeping with Mercedes-Benz tradition. Mainly Binz (Lorch) and Miesen (Bonn) built ambulances on this basis; hearses were created by Pollmann (Bremen), Rappold (Wülfrath), Stolle (Hanover) and Welsch (Mayen). The chassis with standard wheelbase (2.80 metres) were given the series number F123 and initially offered as the 240D and 230. The extended chassis with a wheelbase of 3.43 metres (VF123) were initially available as 240D, 300D and 250.Four or six cylinders?

As early as 1978 Mercedes-Benz thoroughly revised this engine range. Up to the termination of the 123 series the power of the individual models increased owing to improved drive units. The 200 model (now with 80kW) even got a new engine, the M102, in 1980. This engine was also fitted as an injection unit in the 100 kW 230E model. An outstanding new power plant was the turbocharged five-cylinder diesel OM617, which was included in the series in 1981 for the 300D Turbodiesel model (92kW). In the United States this turbocharged compression-ignition engine was offered in all body variants; in Germany, however, the 300D Turbodiesel model was available solely as an estate. 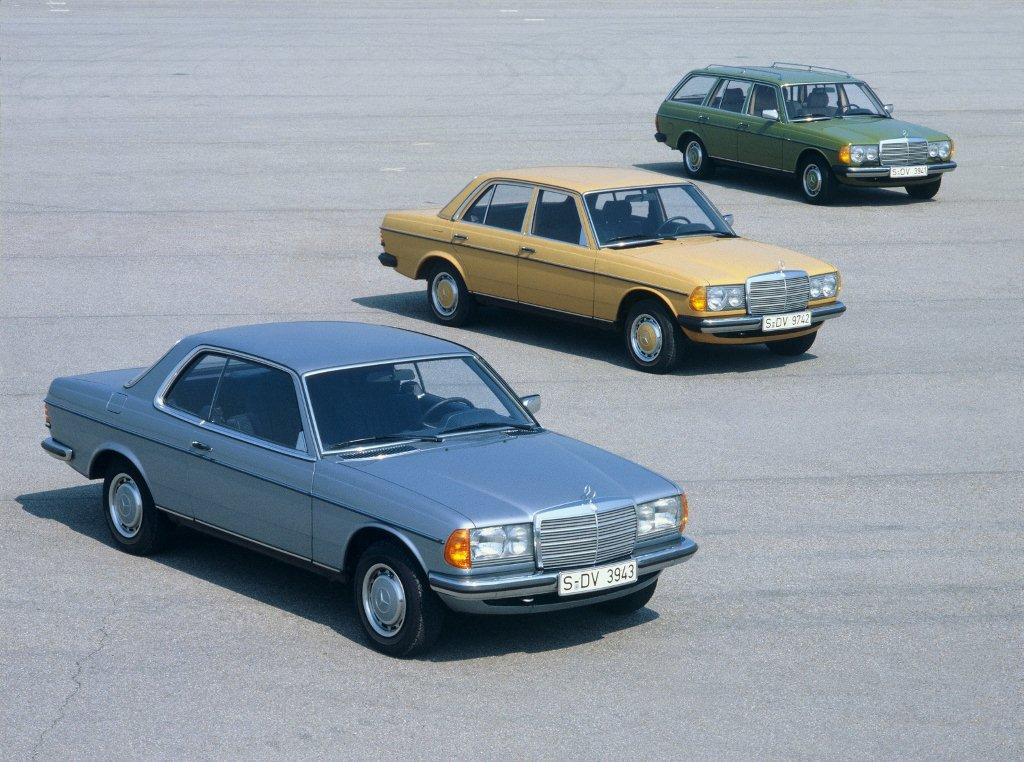 Enthusiasm for the 123 series increased further in 1977. This was the year in which Mercedes-Benz presented three additional body variants: the coupé, the long-wheelbase saloon, and for the first time in the brand’s history a factory-built estate. By expanding its model range the brand forcefully demonstrated the versatility of the new model series. Compared with its predecessor, the coupé was much more independent of the saloon in its design. And the estate inaugurated an entirely new body variant in series production at Mercedes-Benz.

In August 1977 Mercedes-Benz introduced the long-wheelbase version of the intermediate class saloon: the wheelbase of the V123 (3.43 metres) was 63 centimetres longer than that of the saloon (2.80metres). That provided enough space for a third seat bench and made the car a comfortable taxi, company car or hotel limo for seven passengers. The 250, 240D and 300D models were offered with long wheelbase. Whereas the “tailfin” eight-seater saloon was limited to one very economical diesel engine (model 200D long), the 123 series with three powerful versions of the long-wheelbase saloon followed the trend set by the “Stroke 8”.

Despite its imposing proportions and powerful engines, the long-wheelbase saloon was not mainly intended as a representational vehicle. An indication of this was that the diesel engines were still in the majority as against the petrol engine of the 250 model. Rather, this body variant served as a sophisticated touring car for several passengers. Operating for hotels and trade fair companies and as a large-capacity taxi, the V123 impressed with its high degree of ride comfort and great spaciousness. Many characteristics of this body variant later were adopted by well-equipped vans. 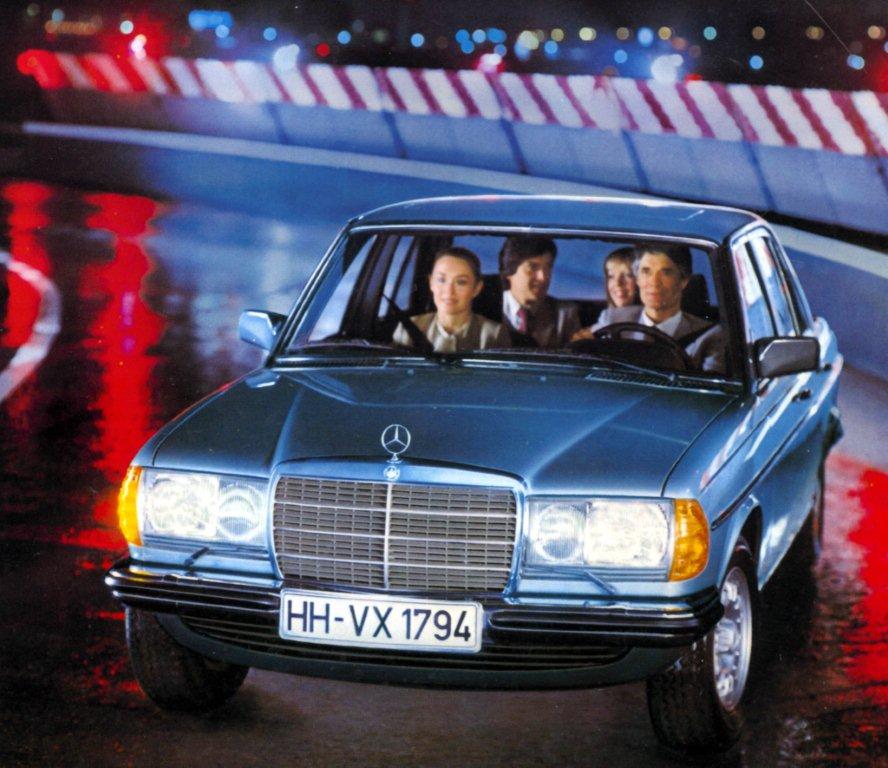 Turbodiesel premiere and facelift for the 123 series

During the production life of the 123 series, the output of various models was improved on several occasions and new models were added. In 1980 the new M 102 engine superseded the old M 115; in the 200 model the new four-cylinder developed 80 kW as a carburettor engine; in the 230 E that replaced the old 230, the in-line four-cylinder – here for the first time equipped with petrol injection – managed 100 kW.

In October 1980 Mercedes-Benz presented a car with a turbocharged diesel engine for the first time in Germany. The 92 kW 300 TD Turbodiesel had the same engine as the 300 D Turbodiesel saloon and the 300 CD Turbodiesel coupé, both of which were built exclusively for the US market. At its 1980 launch, with a basic price of DM 37,200 the Turbodiesel was almost the most expensive production model of the 123 series. Only the 280 CE coupé model cost more (basic price DM 100 higher). Appropriately enough, the car with the turbocharged diesel power plant had the more upscale appointments, including rectangular wide-band headlamps and chromed air inlet grilles in front of the windscreen.

In September 1982 a previous distinguishing feature of the smaller models of the 123 series, the round twin headlamps, was discontinued. All variants were equipped with the rectangular wide-band headlamps familiar from the 280 and 280E models as part of an extensive model refinement package. The numerous other improvements included changed wind-deflecting mouldings on the A-pillars and power steering as standard.

Versatile: special versions of the 123 series

The 123 series often served as a basis for different bodies and conversions. For the purposes of the police, fire and rescue services there were modified saloons and estates. Companies like Binz and Miesen built ambulances on chassis. Other bodies and conversions– hearse, pickup, convertible– were created by outside bodybuilding firms. Finally, for taxi operation Mercedes-Benz offered the saloon, the estate and the long-wheelbase saloon ex factory with the appropriate specifications.

Various specially tuned versions of the 123 series were offered during its production life by companies like AMG, Brabus or Lorinser. The measures ranged from optical changes to the body with the help of paint, side skirts and various light-alloy wheels to modifications of the suspension for lowering the body, tauter damping, and camber changes on both axles. Other possibilities for sports-related improvement included optimisation programmes for production engines or the installation of more powerful engines.

Mercedes-Benz began looking into alternative drive technologies at a very early stage. This purpose was repeatedly served by 123 series vehicles used by the engineers as test mules for methanol, hydrogen and electric drive systems.

From volume model to classic

* Export to North America and Japan