In January 1976 the W 114/115 series “dash-eight” models were replaced by a totally reconstructed type range with the internal designation W 123. 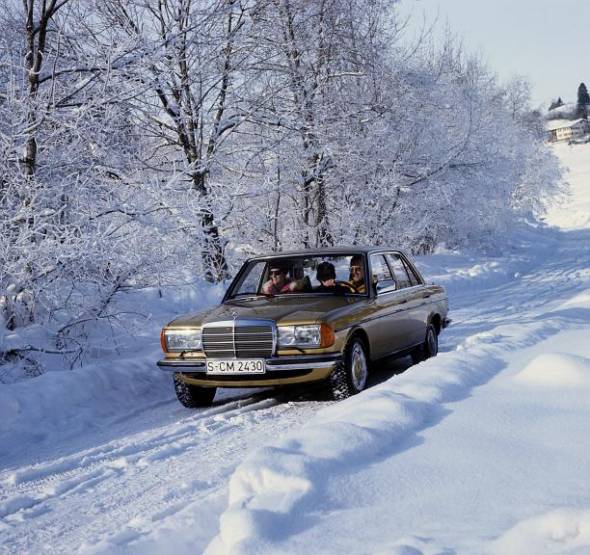 The model family ranged from the 2.0-liter 4-cylinder Diesel with 55 hp to the 2.8-liter 6-cylinder injection engine with 185 hp.

The new model range orientated itself to the S-Class which had been produced for three and a half years. 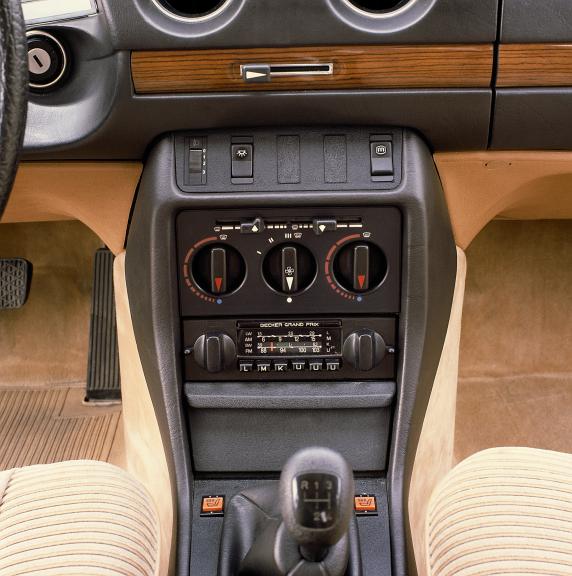 Thus the new medium-size type was also provided with a semi-trailing arm rear axle which had already been introduced with the “dash-eight” models.

Furthermore it was equipped with a double-wishbone front suspension with zero steering-offset. 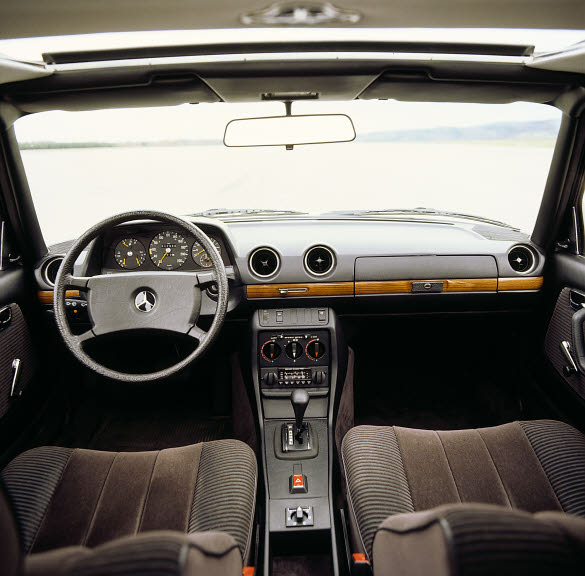 The chassis sub-frame of the preceding models was not necessary any more.

All other safety-related construction details realised for the first time in series 107 and 116 were of course transferred to the medium-size types. 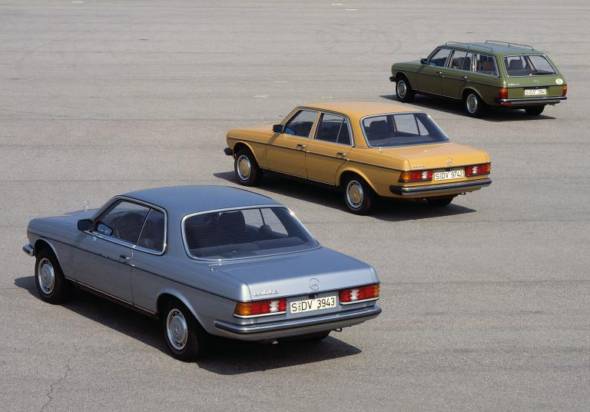 The most important improvements, in comparison to the preceding model range, was the even more stable security passenger cell with stiffened roof-frame structure, high-strength roof and door pillars as well as reinforced doors. 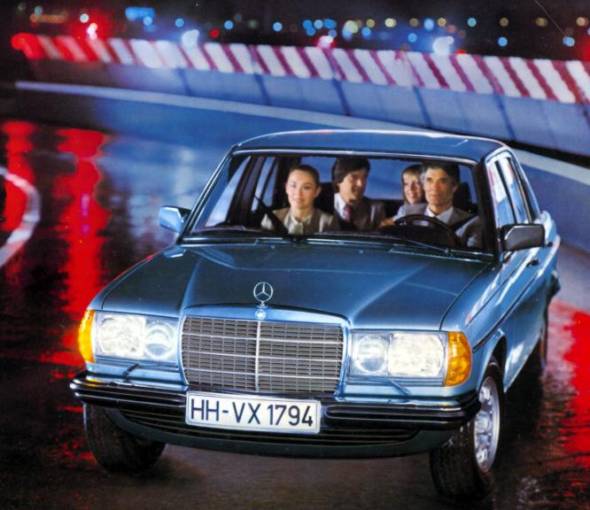 A technical novelty was the safety steering column, realised for the first time in series 123.

Steering aggregate and steering column tube were linked together by a corrugated metal tube.

In case of a crash, this corrugated metal tube could buckle to the side.

This was a further step to reduce the danger of the column tube invading the interior of the car.

The various big round dual head lamps were a characteristic design of the new models.

Next to the main head lamp, under a common lens, there was a smaller halogen fog lamp. 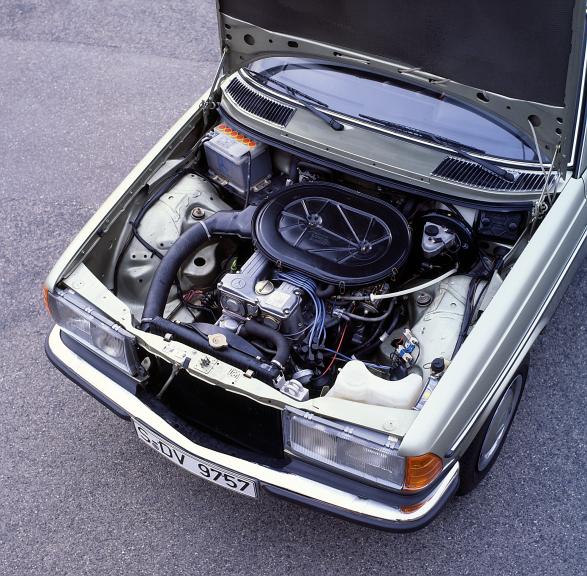 Differing from that, the two top models of the series, Types 280 and 280 E, were provided with rectangular halogen wide-band head lamps. 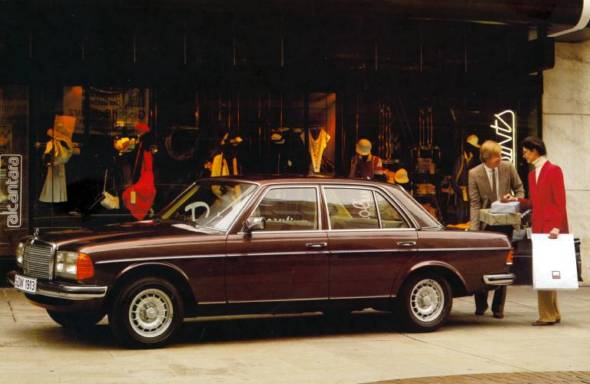 Type 280 as well as 280 E had a twin-scroll exhaust system – with twin end pipes, chromed air induction grill in front of the windscreen and an additional chrome strip under the rear lamps.

The range of engines was mostly taken over from the preceding models. 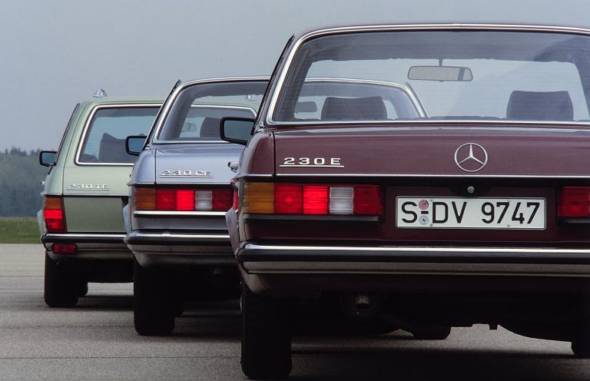 The only exception was the Type 250, which was not provided with the old 2.8-liter aggregate M 130 any more, but with the newly constructed 2.5-liter 6-cylinder engine.

According to a long tradition, the 123 series sedans were also available as chassis with partial bodywork.

They were completed to ambulances, estate cars and other special versions by body manufacturers at home and abroad. 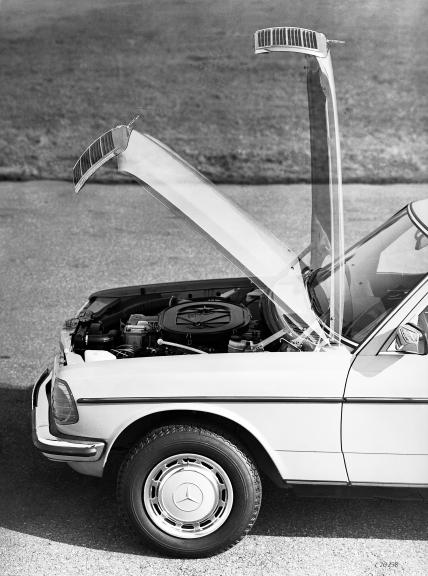 Ambulance constructions based on this chassis were mostly built at Binz in Lorch and at Miesen in Bonn.

Among the best known German producers of funeral cars on the basis W 123 were the body makers Pollman in Bremen, Rappold in Wülfrath, Stolle in Hannover and Welsch in Mayen.

In the course of the year 1977 the 123 series model range was extended by three new body variants.

First a stylistically very appealing coupe was presented at the Geneva Motor Show in March. It was available as 230 C, 280 C and 280 CE.

As their predecessors from series 115 they were mostly used by taxi and hired car enterprises in transfer services. 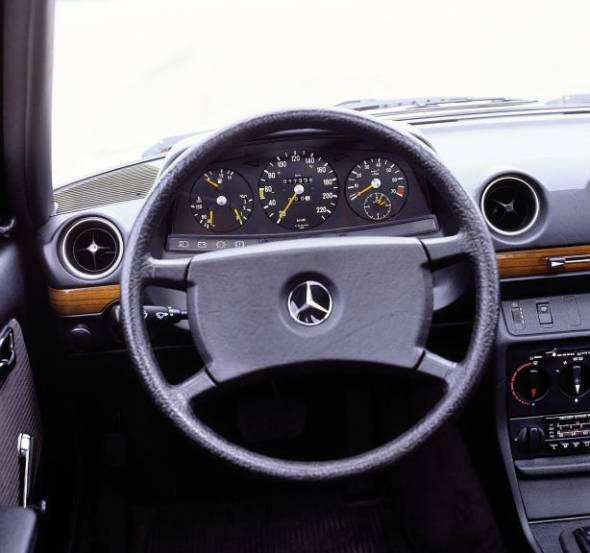 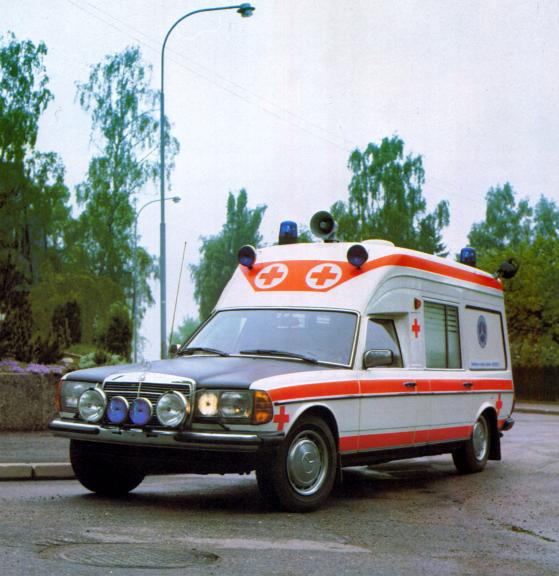 At the same time the 220 D was taken out of the program. Finally, in September 1979, the power of the 5-cylinder Diesel engine in the 300 D and of the 6-cylinder carburettor engine in the 250 was increased as well.

The 3.0-liter 5-cylinder Diesel engine with exhaust-gas turbocharger, which had been used in the S-Class export model 300 SD for almost two years, was now also available in series 123. 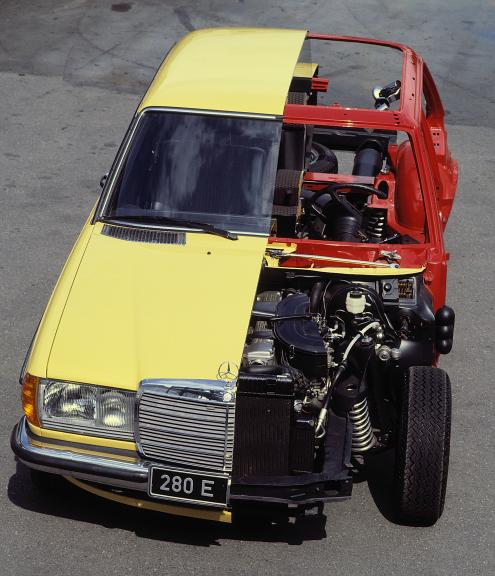 First, however, only for the station wagon. A year later, in August 1981, the turbodiesel was also offered in the 123 series sedan and coupe.

Both, however, were exclusively reserved for export to North America. The two new petrol engines, a 2.0-liter carburettor engine with 109 hp and a 2.3-liter injection engine with 136 hp, replaced the well proven 2.0-liter and 2.3-liter units.

Both engines, two different versions of the new in-line 4-cylinder engine M 102, were designed for slightly slanting installation in order to keep the height as low as possible. 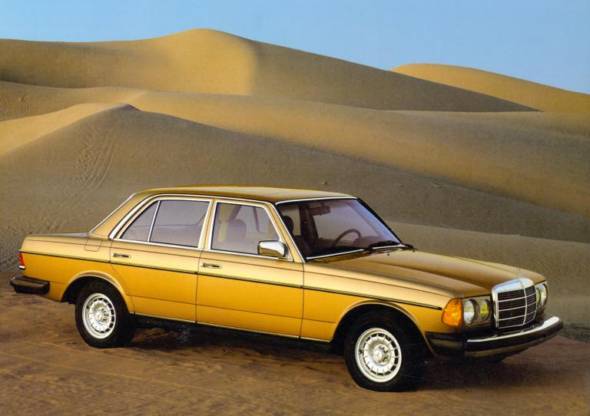 Despite a boost in output of 15 and 25 % respectively, fuel consumption could be reduced by about 10 %. In July 1981 the 280 with the carburettor engine was discontinued but the 280 E with fuel injection remained in the range.

In September 1982 series 123 received a facelift with numerous improvements including power assisted steering as standard equipment.

ABS and airbag were now available as an option. The production of 123 series sedans ended in November 1985, about a year after its successor, the 124 series, had gone into production. 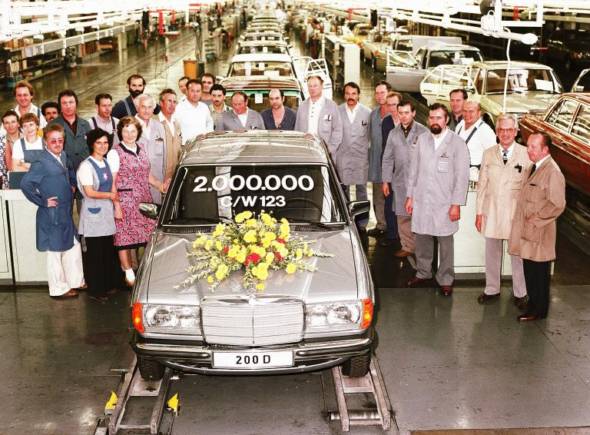