At the turn of the year 1984/85 a new model generation appeared in the medium-size series. It became the successor of series 123, produced for nine years. 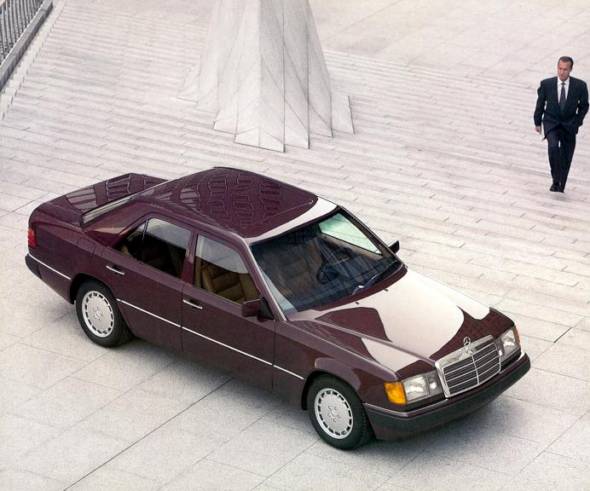 The technological overall concept of series 124 showed close parallels to the compact-class. By using high-strength steel sheets as well as other weight reducing materials and by an aerodynamic optimisation of the body, a considerable reduction of the fuel consumption had been achieved even in the medium-size series.

At the same time the safety standard, reached with the S-Class and the compact-class in spite of the light construction, was further optimised.

The passenger cabin of series 124 excelled by high side-impact and overturning resistance. It was equipped with ingenious deformation zones in nose and tail.

The criterion in the asymmetric frontal impact with 40 % overlapping and at 55 kph was now also fulfilled by the sedans of the medium range.

Furthermore, for the protection of pedestrians and drivers of two wheel vehicles, the area of a possible contact zone was concipated as resilient as possible. 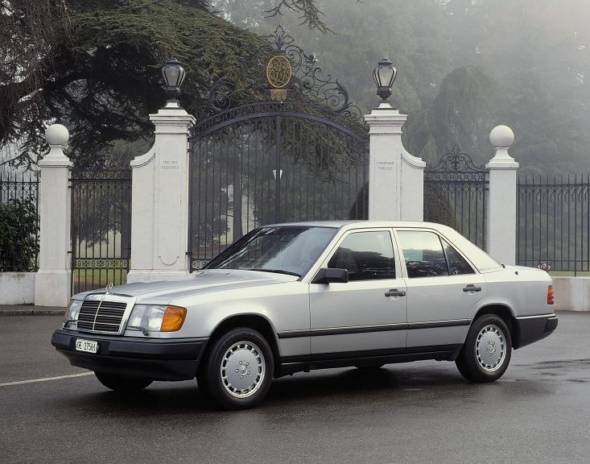 As to the stylistic design there were also many common features with the compact class. In spite of this, however, the new range of Types also presenteditself with independent design elements.

They were used forthe first time and had a factual-functinal background true to the principle “form follows function”.

The characteristic shape of the tail tapering to the end and considerably rounded at the lateral top edges was aerodynamically especially favouraly.

It was based on experiments in the wind tunnel. Two further typical design charactristics were the trapezoidal deeply pulled down boot-lid and the inclined inner edges of the almost square rear lights.

A remarkable innovative construction detail were the lift controlled panorama wipers. With a 86 % wiped windscreen view it was, at that time, the largest wipe pattern in the world. 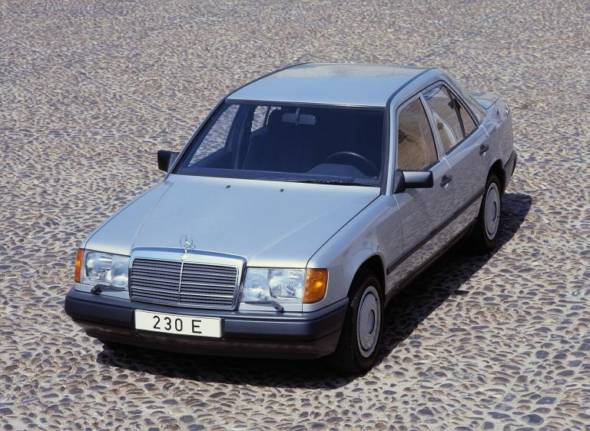 Thanks to a rotational movement overlapping the vertical movement the upper edges of the windscreen could be wiped much more efficiently than with the conventional one arm wiper.

Electrically heated windscreen washer jets were part of the standard equipment of all models of this series.

The front and rear axle constructions, already known from the compact-class, allowed an excellent driving performance.

The new medium size models were also equipped with a damper strut front axle with individual A-arm suspension and anti-dive device as well as a multilink rear supension, in which each rear wheel was led by fife independent control arms. The engines were mostly new developments.

Only the 4-cylinder aggregates came from Types 200 and 230 E of the previous W 123 series. Besides the completely newly constructed 6-cylinder injection engines with 2.6 liter and 3.0 liter displacement, there was a new Diesel engine generation.

Its 2.0-liter 4-cylinder engine had already been used in the 190 D and was now completed by a 2.5-liter 5-cylinder as well as a 3.0-liter 6-cylinder variant. From the outside all models of the series were almost completely identical.

The only difference were the twin-scroll rear silencers in the 6-cylinder models and the front aprons with lamella like air inlet slots in the 300 D.

At the Frankfurt Motor Show IAA, in September 1985, eight months after the market introduction of the sedans, a 124 series station wagon variant made its debut.

The 4MATIC, the technically most expensive system of the new concept, was available for the 6-cylinder sedans and the station wagons of series 124. 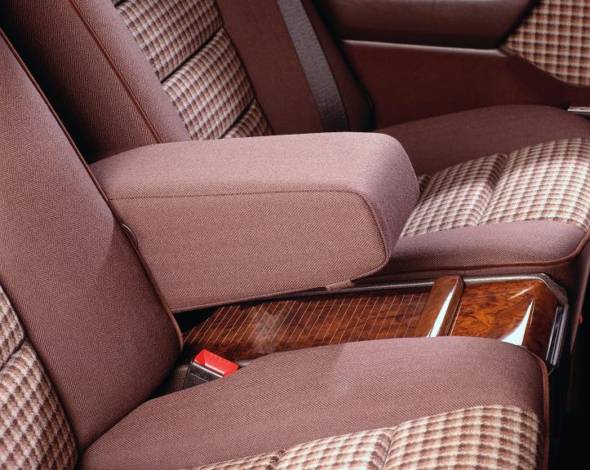 Besides the complex regulation electronics it comprised a complete additional front-wheel drive with transfer gear and differential.

The conditions in the engine department of the 4MATIC-models made it necessary to integrate the compensating gear of the front drive train into the oil pan.

These highly technical measures of this perfectionated front-wheel drive system, however, had its consequences in the price. 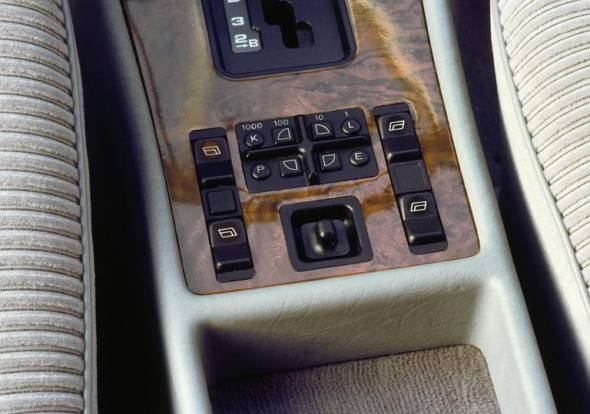 As it was usually the case for years with the medium-size series of Mercedes-Benz, series 124 was also available as chassis with partial bodies. 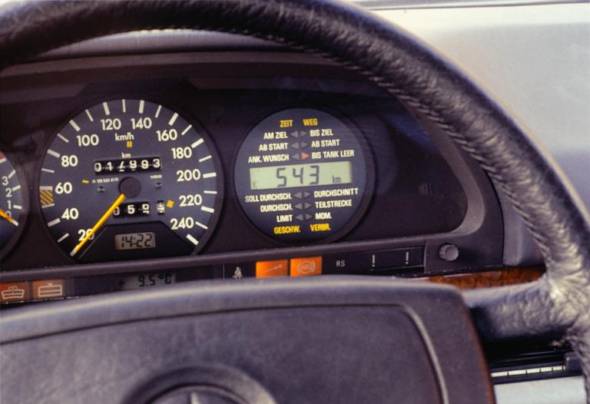 Ambulance bodies were produced for this chassis, mainly by Binz in Lorch, Miesen in Bonn and Visser in Leeuwarden.

Hearses were built on the basis of the W 124 by, amongst others, Pollmann in Bremen, Rappold in Wülfrath, Stolle in Hanover and Welsch in Mayen.

From September 1985 all petrol-engined models of this series except the basic Type 200 with carburettor could be supplied with three-way catalytic converters. 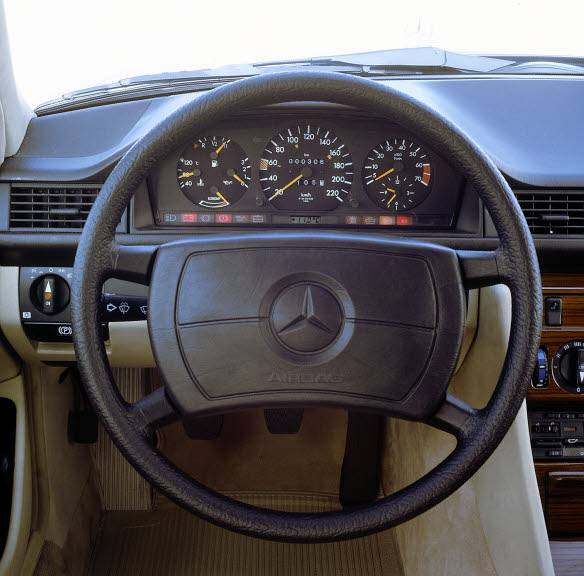 An alternative option was the so-called “RÜF version”, without catalyst and lambda probe, but with the multi-functional fuel supply and ignition system.

This version could easily be equipped with a catalyst at a later date, an advantage for many customers as unleaded fuel was not yet available everywhere.

The 6-cylinder models were supplied as “RÜF versions” as standard. From September 1986 all Mercedes-Benz cars were available with a catalyst, including the carburettor version.

The “RÜF versions” were still also offered, with a price reduction, until August 1989. In 1987 the 124 series model range was again extended. First two coupes were presented at the Geneva Motor Show in May.

Then two new sedans were shown at the Frankfurt Motor Show in September: the 300 D Turbodiesel and 300 D Turbodiesel 4MATIC, both using the 3-liter 143 hp 6-cylinder engine that had been introduced in the station wagon two years earlier.

One year later, at the Paris Motor Show in September 1988, two further models of this series were introduced: the 200 E and the 250 D Turbodiesel.

In fact the 200 E had been produced for some time for the Italian market and the engine of the 250 D Turbodiesel was already in use in the compact-class. 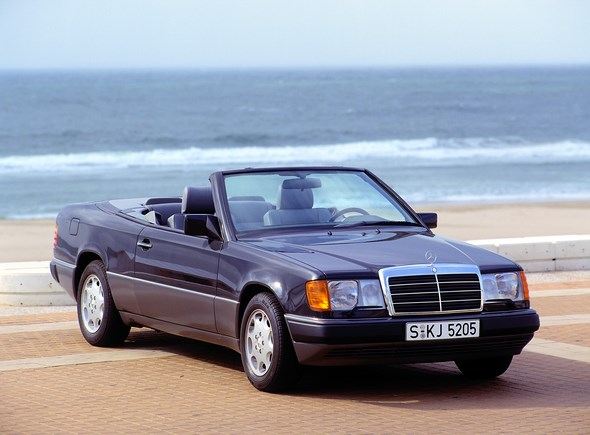 However, this engine was modified at this time, as was the 3-liter 6-cylinder turbodiesel, in order to reduce particle emissions. This was done by redesigning the prechamber to achieve more efficient combustion.

A pleasant side-effect of the new Diesel technology was that the output of both engines rose by 4 hp In September 1988 all models of the series received more comprehensive standard equipment, including the anti-lock braking system (ABS) and a heated mirror on the drivers door. 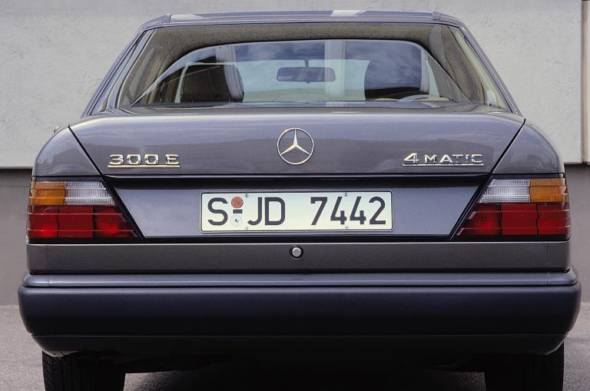 The windscreen washing system, which had been taken over from the S-Class, had a heated water tank as well as heated jets and hoses.

As a part of the “Diesel ’89” initiative in February 1989 the naturally aspirated Diesel engines were also given the new prechambers with angled fuel injection.

Furthermore, the injection pumps were all fitted with an altitude correction jet to achieve low emissions at all altitudes. 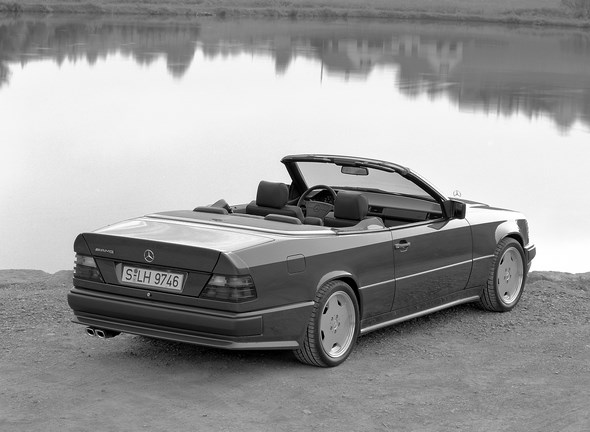 The result was that particle emissions were reduced by 40 % and the cars were able to fulfil the strict American regulations without soot filters. 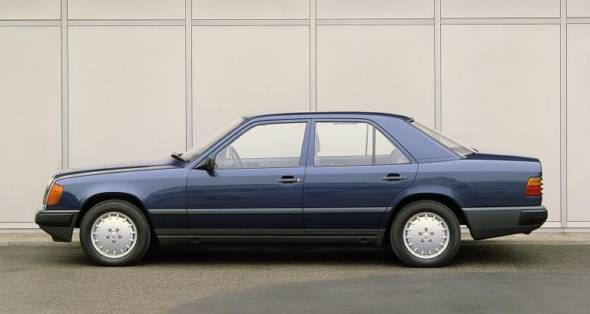 Emissions were reduced even further by means of a complex exhaust cleaning system using a special oxidation catalyst in combination with a finely tuned exhaust recirculating system.

This system became available as an option for naturally aspirated Diesel engines from October 1990 and for turbodiesels six months later. 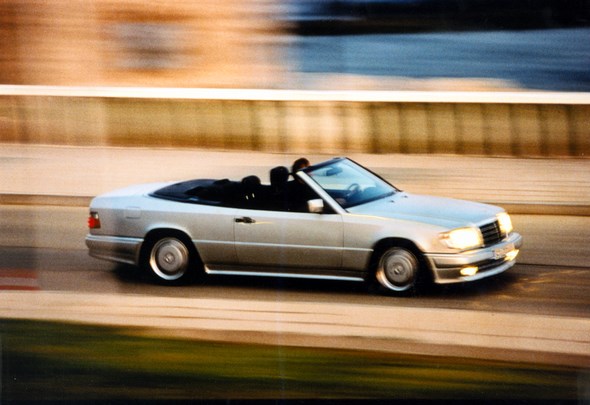 In September 1989 at the Frankfurt Motor Show a completely revised range of the medium-sized class was presented.

The main points were a facelifted body and a redesigned interior. Two of the exterior features were the addition of some polished stainless steel and chrome trim and door mirrors in the same colour as the bodywork.

Numerous improvements were made to the interior of the car, including better seats. 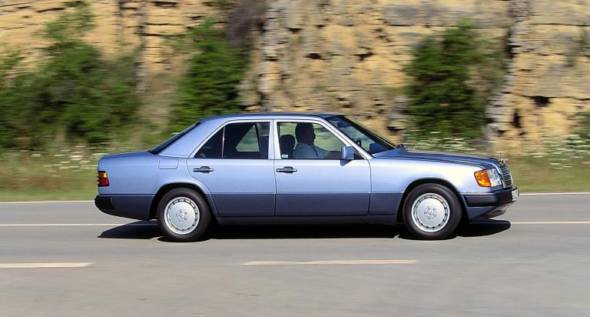 From September the “Sportline” package, already known from the compact-class, was available for all 124 series models except the 4MATIC versions.

Apart from these improvements in design and equipment the revised 124 series included five completely new models. The sedan, the coupe and the station wagon were now also offered with a 3-liter 220 hp 6-cylinder 4-valve engine. 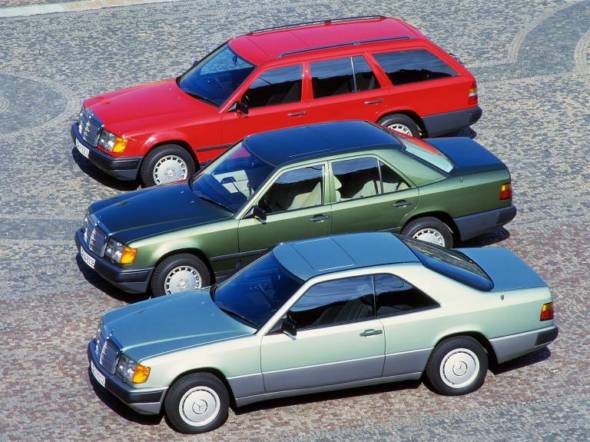 This was based on the 3-liter with 2 valves per cylinder and had already appeared in the 300 SL-24 six months earlier.

Due to the different catalyst used it had 11 hp less than in that model, however. Another new model shown in Frankfurt was a “stretched” limousine version. 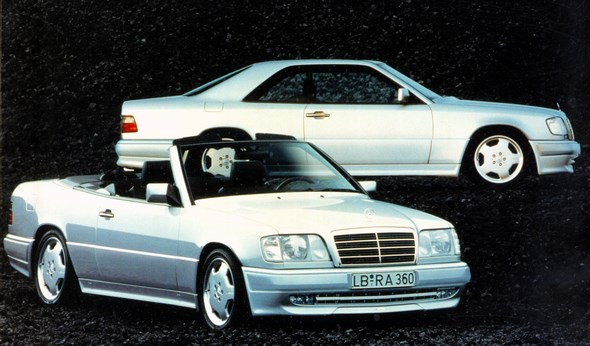 This model had been developed jointly with the company Binz in Lorch, who were then also involved in the production. The wheelbase was extended by 800 mm to 3600 mm and the total length also increased by 800 mm.

Unlike their predecessors, the 250 D and 260 E limousines had six doors and a proper middle bench with almost the same seat depth and seat height as the front seats. 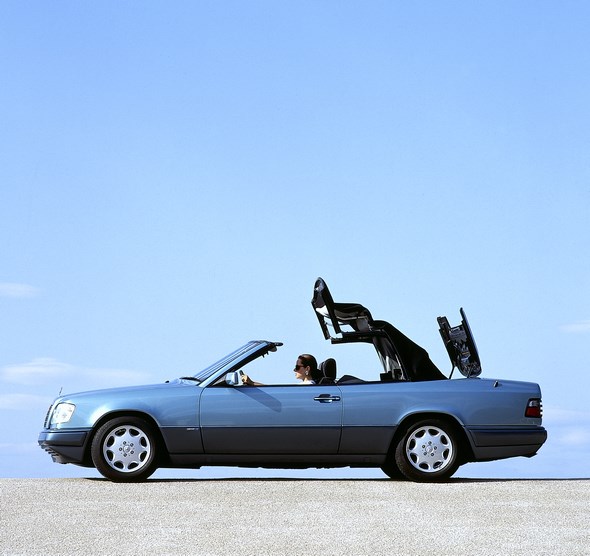 This car was barely distinguishable from the other versions with smaller engines, but was equipped with a 326 hp 5-liter V8-engine with four valves per cylinder based on the engine of the 500 SL. 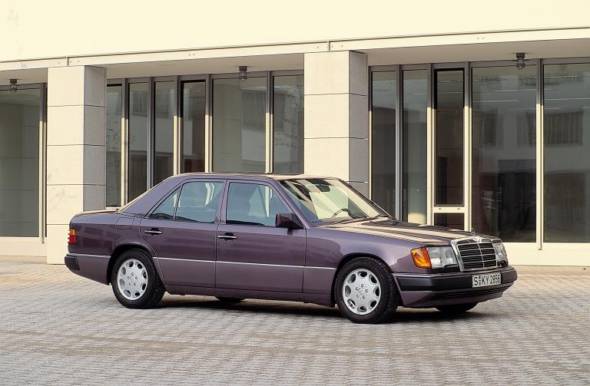 Performance was breathtaking: with the standard 4-speed automatic transmission 0-100 kph was achieved in 5.9 seconds and top speed was electronically limited to 250 kph.

The standard anti-slip control (ASR) prevented the wheels from spinning under full throttle. 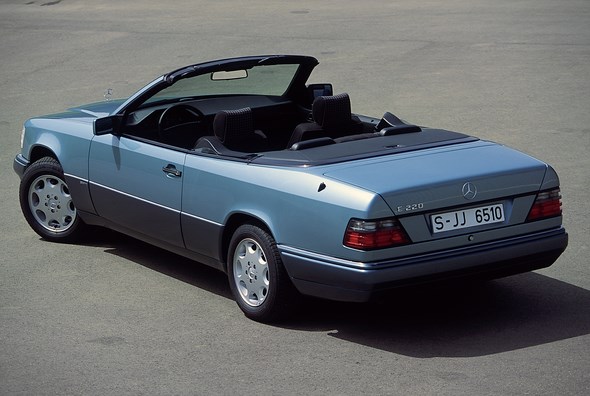 A new version of the 4-valve V8 was used in this car for the first time incorporating numerous detail improvements to the block, crankcase and connecting rods as well as to the catalytic converter. 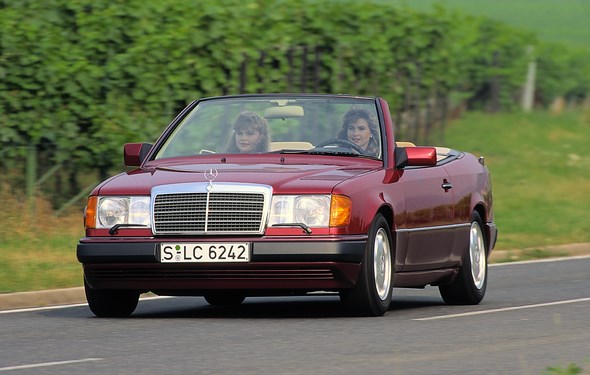 For the first time fuel injection was managed by Bosch LH-Jetronic with air-mass sensoring. Bore and stroke were unchanged. 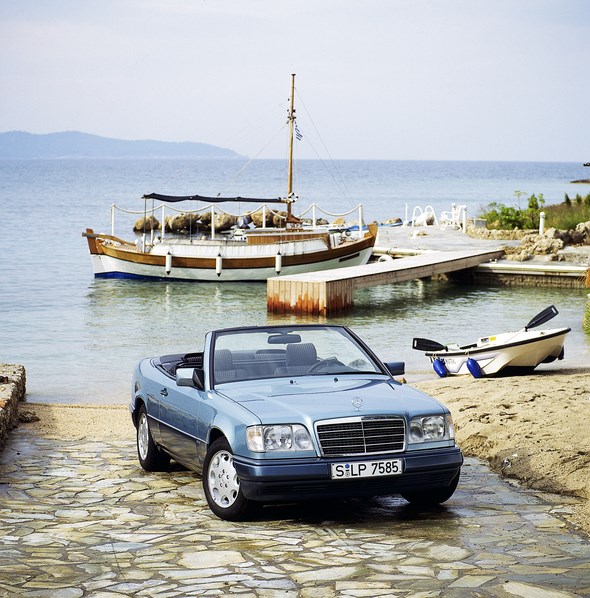 The wings of the 500 E were widened slightly, fog lamps were integrated and 16-inch light-alloy wheels were used with 225/55 ZR 16 tires.

Suspension was lowered by 23 mm and the rear axle was fitted with hydro-pneumatic self-levelling. Production of this exclusive model, which cost DM 135,000 when it appeared, was carried out in close cooperation with Porsche.

In September 1991 at the Frankfurt Motor Show yet another body version of the 124 series was presented: the 300 CE-24 Cabriolet. 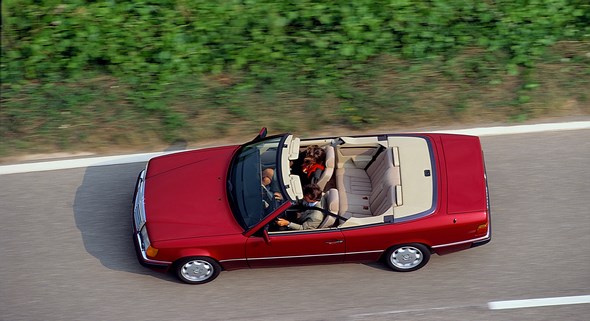 After a break of exactly 20 years a four-seater convertible was available again. One year later, in September 1992, the medium-sized range was again revised, after the 2,000,000th car of this series had been produced in June. 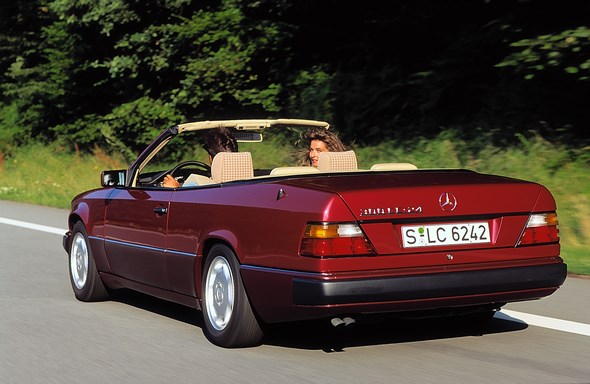 Whereas the facelift of autumn 1989 was mainly concerned with styling changes, this time the focus was on engines and equipment. 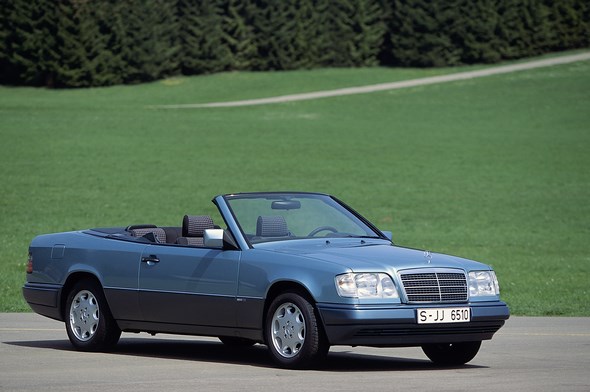 The petrol engines were thoroughly modernised and converted to four-valve technology. Two 4-cylinder engines of the M 111 engine series with 2 and 2.2 liters replaced the old two-valve engines of the M 102 series.

The new engines had more power and more torque at all engine speeds; yet fuel consumption was lower. Emissions were reduced by increasing the volume of the catalyst.

The 6-cylinder engines were succeeded by two new engines with 2.8 and 3.2 liters displacement. 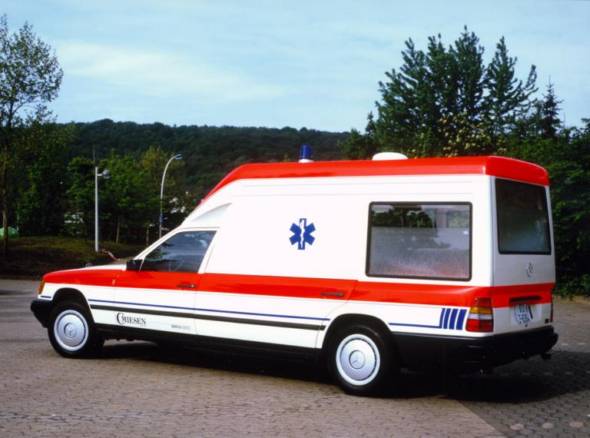 Like the old 3-liter 4-valve unit, these new engines belonged to the M 104 series, but had an altered bore to stroke ratio. All 4- and 6-cylinder engines now had the same bore, an advantage in terms of more flexible and more economical manufacturing. 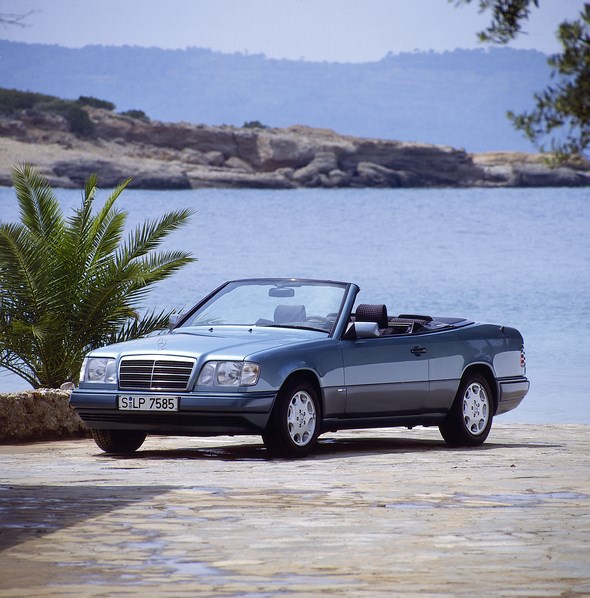 The new 2.8-liter engine had better power and torque than the old 2-valve 3-liter of the M 103 family without using more fuel. 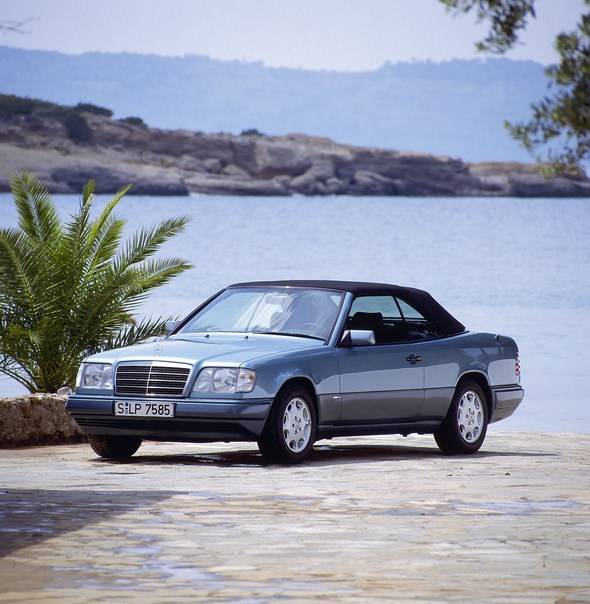 The 3.2-liter version, which had already been used in the S-Class, had the same nominal output as the old 3-liter 4-valve unit, but this output was reached 900 rpm earlier. 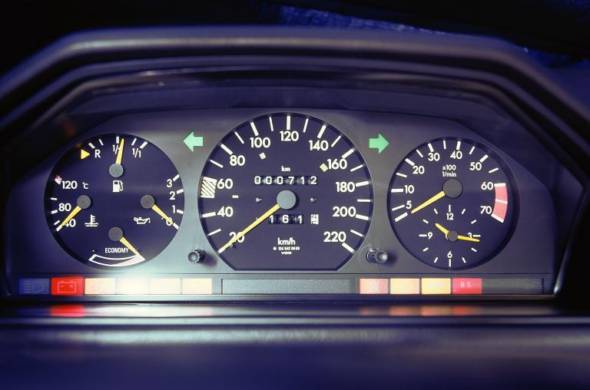 Maximum torque was increased and higher torque was available at all engine speeds. Standard equipment for all of the models of the 124 range was improved significantly and included, from October 1992, airbag, central locking and electrically operated door mirrors. 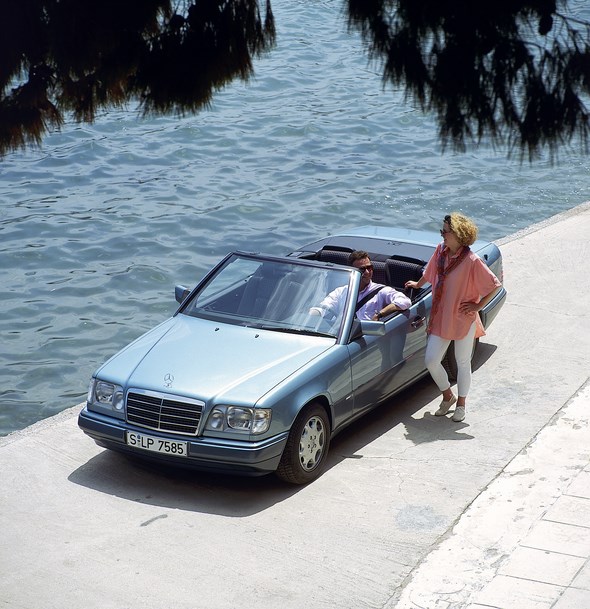 The 4-cylinder versions also got the 5-speed manual gearbox without a price increase. At the same time the 400 E was presented in Germany; it had already been exported to the USA and Japan for a year.

Its engine was the 4.2-liter 4-valve V8 from the S-Class with 278 hp performance was very respectable, if not quite on a par with the 5-liter model: with standard 4-speed automatic transmission 0-100 kph was achieved in 6.8 seconds and top speed was also electronically limited to 250 kph. 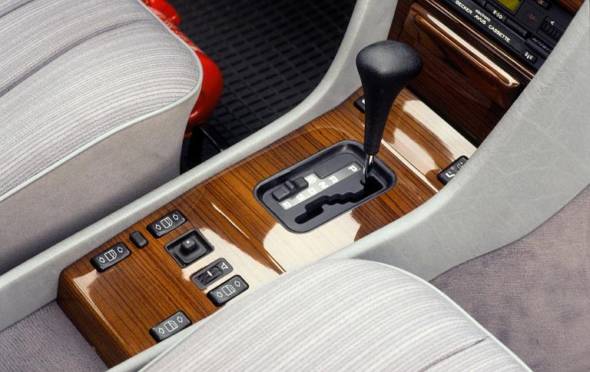 Externally the 400 E was identical to the smaller engined versions, but there were several technical modifications, including the braking system from the SL. The exhaust system corresponded to that of the 500 E. 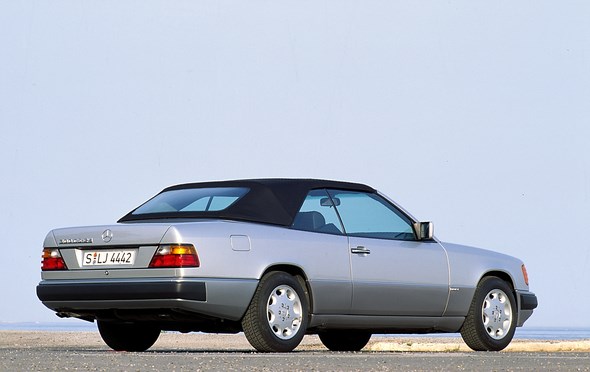 In comparison with the top model of this range the 400 E could be regarded as a special offer – when it was launched in October 1992 its price was over DM 50,000 lower than that of the 500 E. These modernisations were continued six months later.