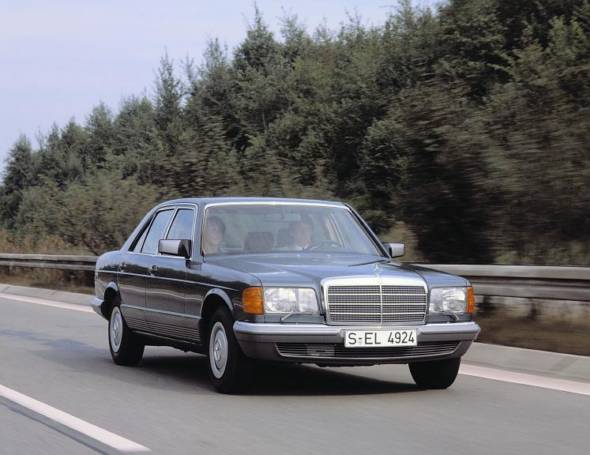 In September 1979 a new generation of the S-Class was presented at the Frankfurt International Motor Show IAA. The range of series 126 first comprised seven models. 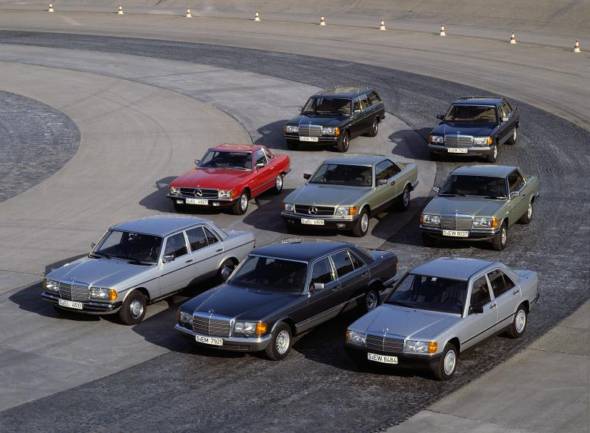 There was a choice of four engines – from the 2.8-liter 6-cylinder carburettor engine with 156 hp to the 5.0-liter all-aluminium V8-engine with petrol injection and 240 hp. Furthermore, one could decide between two body variants. 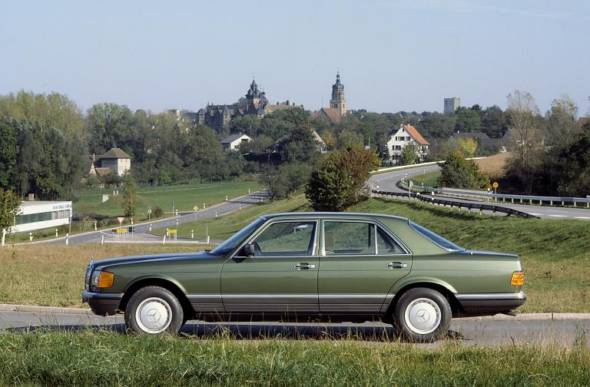 Beside the normal version there was a prolonged variant as had been offered for generations in the upper-class sedans.

This time the enlargement of the wheelbase with 140 mm was more remarkable than usual. As always it all was of benefit to the passenger leg room and the entrance width of the rear doors. 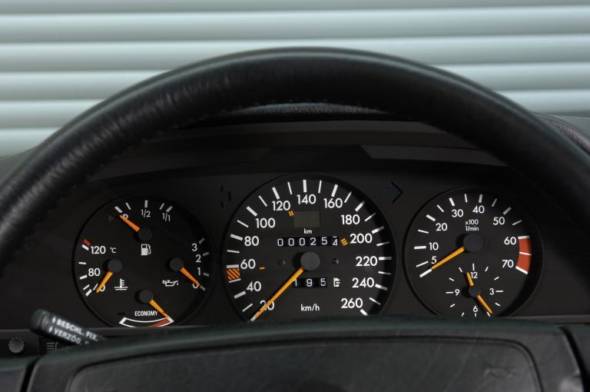 Important goals in the development of this new series were next to a higher driving comfort and safety the reduction of energy consumption.

Using weight reduced materials and a less air resistant body, optimised in the wind tunnel, helped the new S-Class to reduce its fuel consumption by 10 % in comparison to its preceding models.

The two 8-cylinder engines of the previous series were replaced by two redesigned units with enlarged displacement and all-aluminium block. 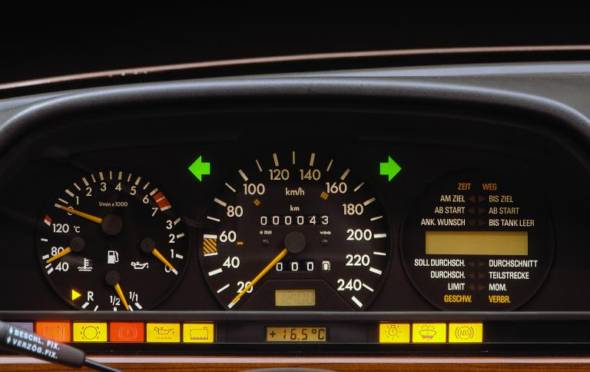 The 5.0-liter engine which took the place of the 4.5-liter grey cast iron aggregate was already known from the 450 SLC 5.0.

The 3.8-liter all-aluminium engine had been developed after the example of the 5-liter engine from the time tested 3.5-liter V8 with grey cast iron block. 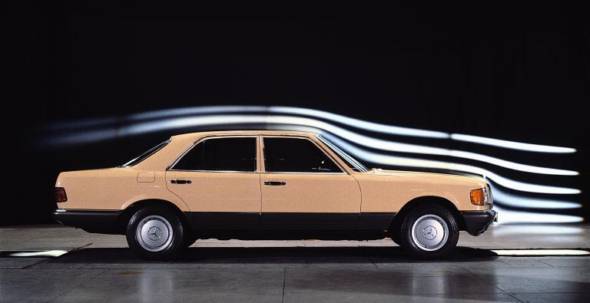 Due to their higher power with reduced weight the new V8-engines made a better driving performance combined with a more economic fuel consumption possible.

The carburettor and injection version of the 2.8-liter 6-cylinder aggregate remained unchanged in the program. 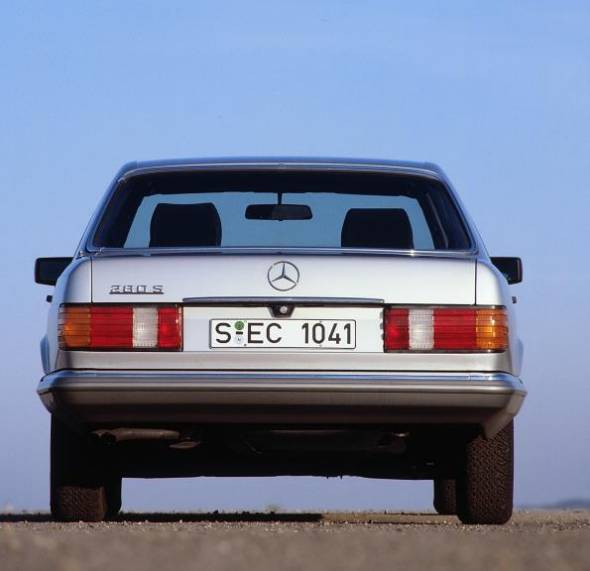 Of series 126, too, a Diesel version was produced for export to the USA. As its predecessor, Type 300 SD was also provided with a supercharged 3.0-liter 5-cylinder engine.

Its performance, however, was increased by 10 hp to 125 hp. The layout of the vehicle basically corresponded to the previous models. 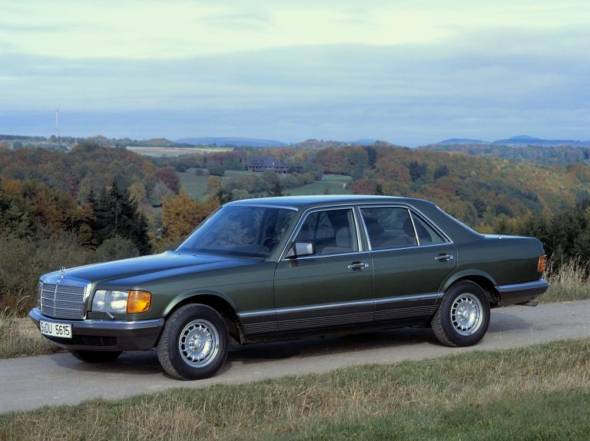 The new S-Class sedans, too, were equipped with a semi-trailing arm rear axle as well as a twin control-arm front wheel suspension with zero steering offset.

The body had been constructed according to the newest insights into safety research. Thanks to new construction principles the passenger cell now also remained unharmed at an offset impact at a collision speed of 55 kph.

World wide the 126 series sedans were the first series vehicles fulfilling the criterion of an offset crash. The characteristic design elements of the new S-Class present themselves more in the lower zones.

For the first time a Mercedes-Benz car hat no classical bumpers any more.

In stead, there were generously dimensioned plastic-coated bumpers seamlessly integrated into the front and rear apron.

Broad side protection strips formed an optical link between front and rear apron, placed at the height of the bumpers between the wheel cut-outs. 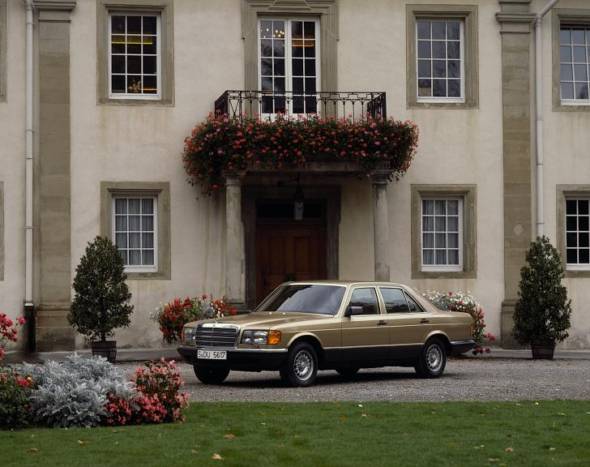 In autumn 1981, two years after its debut, series 126 was completed by an elegantly designed coupe version shown at the Frankfurt Motor Show IAA.

The car was only available with an 8-cylinder engine. Within the “Mercedes-Benz Energy Concept” for reducing consumption and pollutants, presented at the same time, the two V8-aggregates had been thoroughly redesigned. 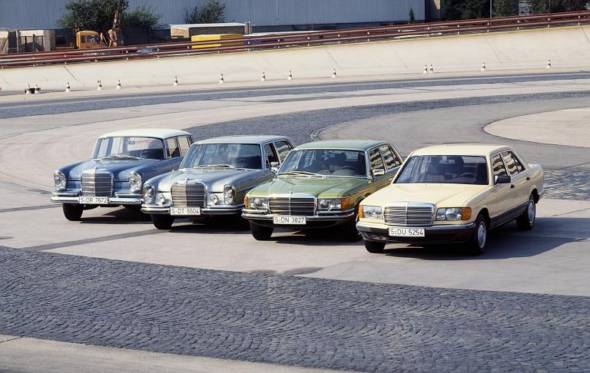 Next to an increase of compression, a camshaft with changed timing, air-circulated injection valves and an electronic idle-speed control device stood on the list of improvements.

Due to the changed cam shift adaptation the torque maximum could be shifted towards lower numbers of revolution. In case of the 3.8-liter engine it was even increased. This aggregate was thoroughly changed. In order to obtain a more favourable volume-surface ratio the bore was reduced and the stroke increased.

Thus the modified 3.8-liter V8 showed a slightly increased displacement. In both eight cylinders slight power reductions had to be taken into account compensated, however, by a considerably improved economic efficiency.

In both cases the rear axle transmission ratio was adapted to the changed characteristics of the engine. The two 6-cylinder engines were also changed in a number of details, thus also achieving some economising effect. 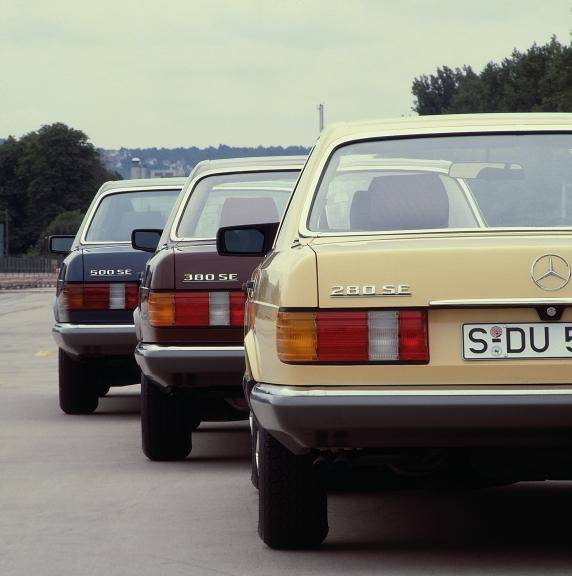 The power potential, however, was not affected by these measures. Four years after the presentation of this energy concept a comprehensive model improvement was launched.

Once again at the Frankfurt Motor Show IAA, in September 1985, a completely new model range of the S-Class was introduced. 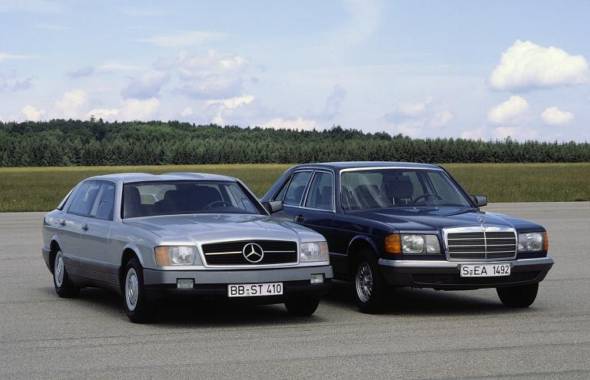 Four years after the presentation of this energy concept a comprehensive model improvement was launched. Once again at the Frankfurt Motor Show IAA, in September 1985, a completely new model range of the S-Class was introduced. 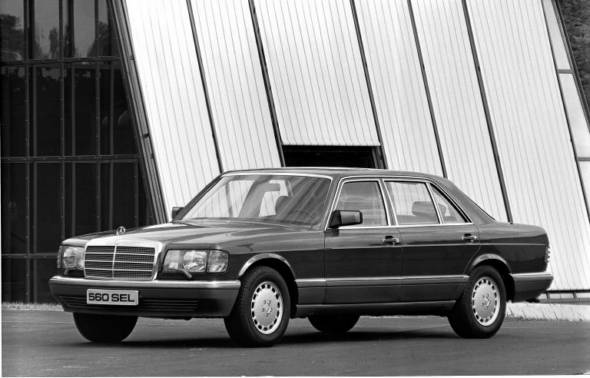 Two newly constructed 6-cylinder aggregates which had made their debut in the medium-size W 124 series nine months before, now replaced the time-tested 2.8-liter dohc-engine M 110. 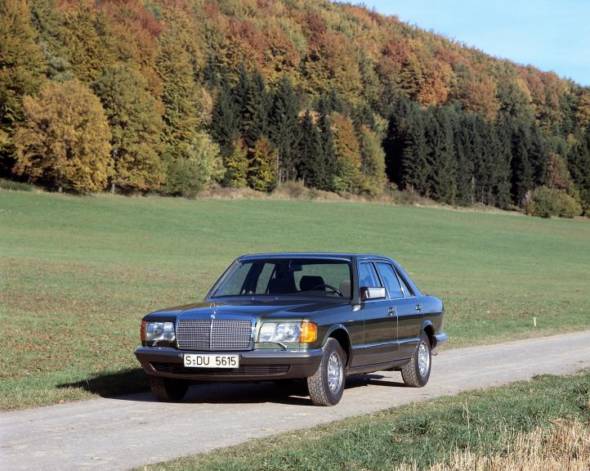 A 4.2-liter V8-engine was new, obtained by reboring the 3.8-liter unit, and was used in the S-Class, the SEC coupes and in the SL. 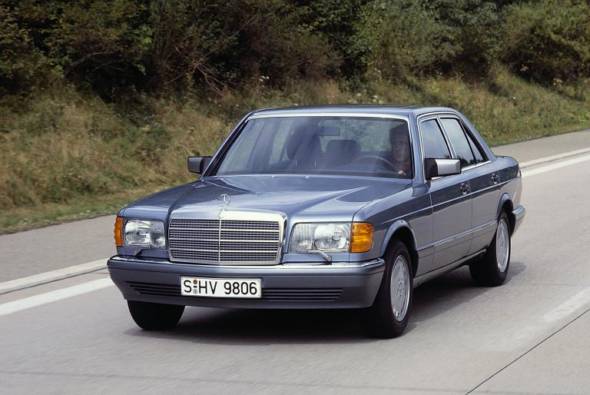 The 5-liter engine was also modified, it now had electronic ignition and Bosch KE-Jetronic fuel injection with electronic-mechanical control and developed 245 hp.

The most spectacular new engine was a 5-liter V8, obtained by giving the 5-liter engine a longer stroke and developing 272 hp. 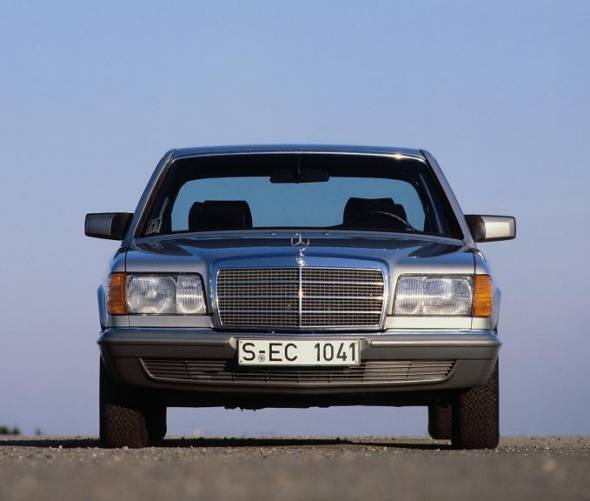 A version with even higher compression and 300 hp was also available, not with a three-way catalytic converter, however.

But even without a catalyst this so-called “ECE version” fulfilled the exhaust requirements of the European Economic Commission. 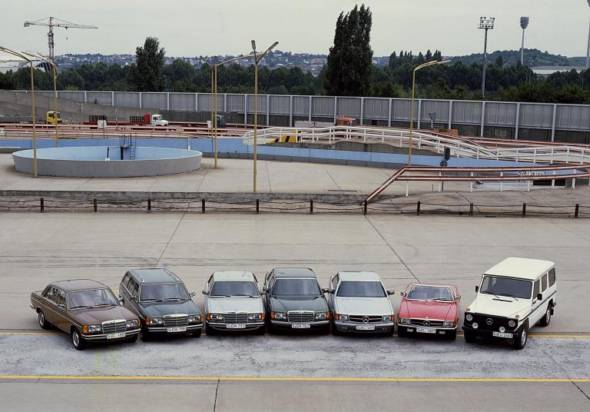 At that time the 560 SEL and 560 SEC models equipped with this engine were the most powerful standard Mercedes-Benz cars that had ever been built.

For all other versions a three-way catalytic converter was available as an option. The so-called “RÜF version” was standard, the cars did not have a catalyst or a lambda probe, but they had a multi-functional fuel mixture and ignition system. 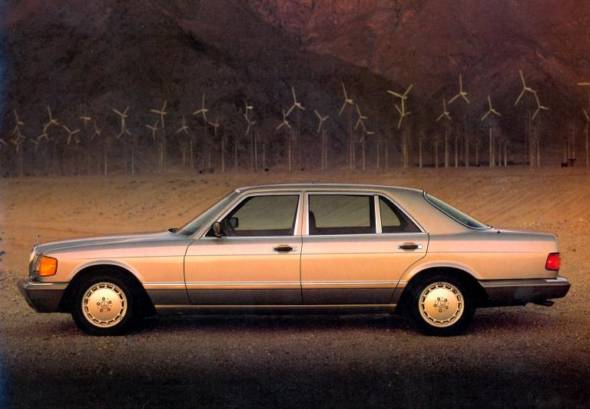 A three-way catalyst could easily be fitted at a later date, if desired. As unleaded petrol was not on sale everywhere this was a practical solution for many customers.

From September 1986 the three-way catalyst was standard equipment on all petrol-engined Mercedes-Benz cars and the “RÜF version” was available, with a price reduction, until August 1989. 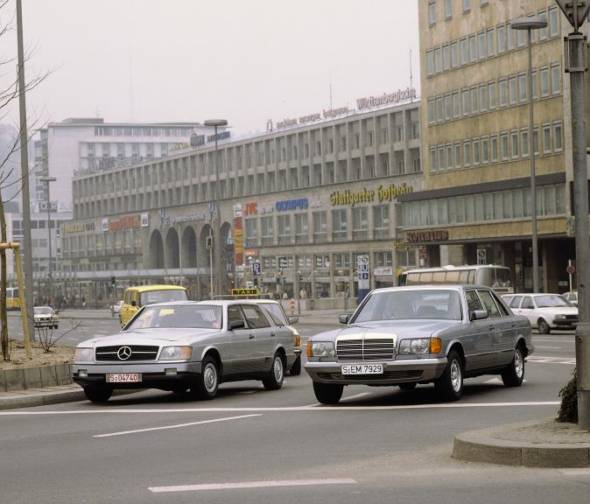 No fundamental changes were made to the chassis. However, the rear axle design was modified a little in order to improve ride and noise levels.

All 126 series models were now equipped with 15-inch wheels and larger brakes. The design of the optional alloy wheels, only standard on the 560 SEL and 560 SEC, was modernised and made similar to those of the compact-class and medium-sized cars. 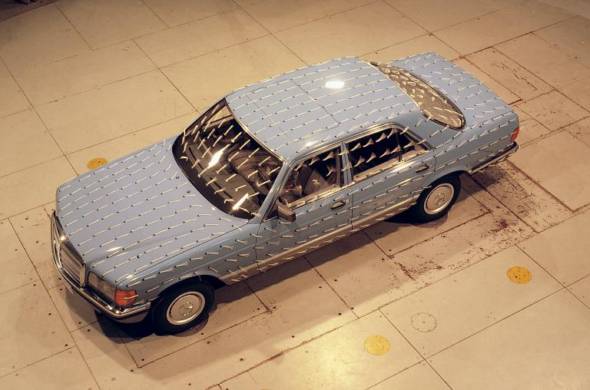 In September 1987, as the S-Class got unexpectedly fierce competition in the form of the BMW 750 i, the performance of all V8-engines was increased.

Compression was increased to 10, this and other measures resulted in 6-10 % more power, depending on the model. The effect on engines fitted with catalysts was even larger. 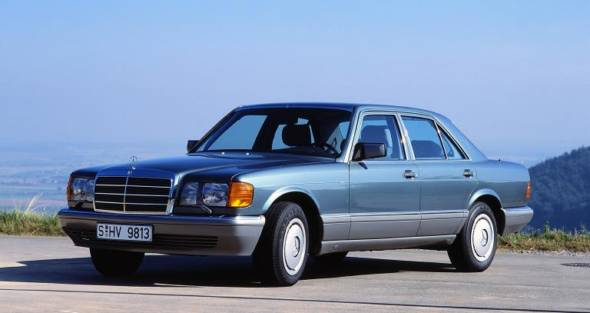 In September 1988 the 560 SE was added to the range, meaning that the 5.6-liter engine was now also available in combination with the normal wheelbase.

From June 1989 a new Diesel version was produced, still only for export to the USA. Production of the 300 SDL had ceased in September 1987. 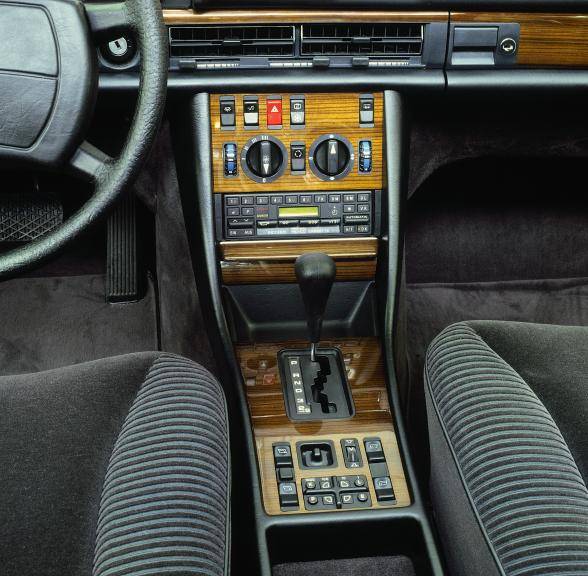 The 350 SDL had a new 3.5-liter 6-cylinder engine, which had been obtained from the old 3.0-liter by increasing bore and stroke.

The new turbodiesel was optimised for torque rather than power and actually had 14 hp less than its predecessor. 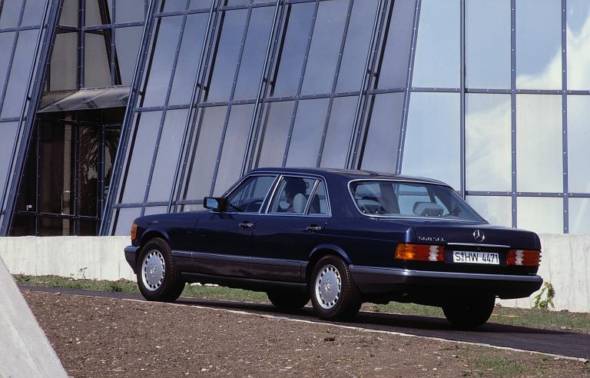 But in view of the general speed limit 136 hp was sufficient power; maximum torque was 1 % higher and was already available from 2000 rpm.

From June 1990 the 350 SD with normal wheelbase was also available. An armour-plated version of the 126 series 8-cylinder cars was also offered, as had been the case with series 116. 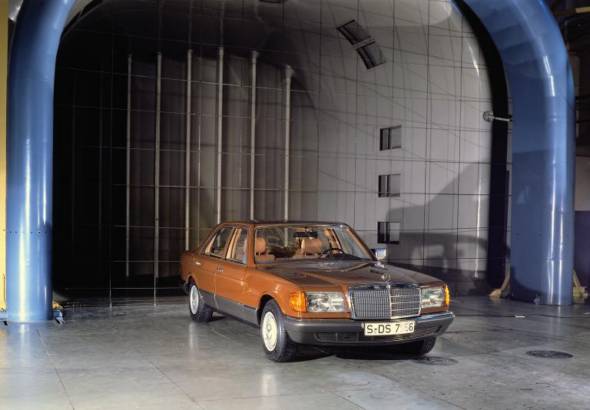 The armour-plating could be perfected further due to intensive research and development. 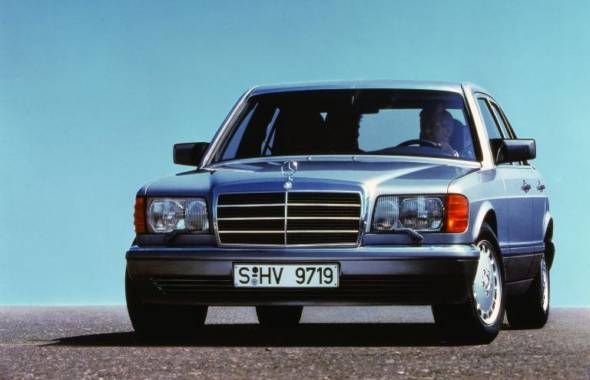 A total of 1,465 cars of this type were produced. Eight 140 series models were shown at the Geneva Motor Show in March 1991 as the successor to the 126 series.

Although the new models went into production a month later, series 126 was kept still produced for some time for export. 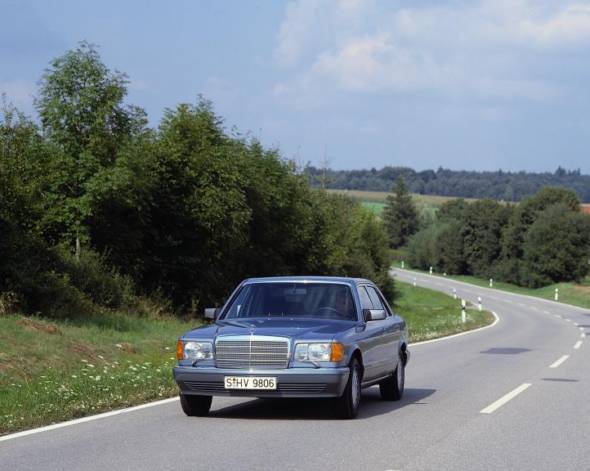 During a twelve-year production run a total of 818,036 units of 126 series S-Class sedans were produced in Sindelfingen, of which 97,546 had Diesel engines.