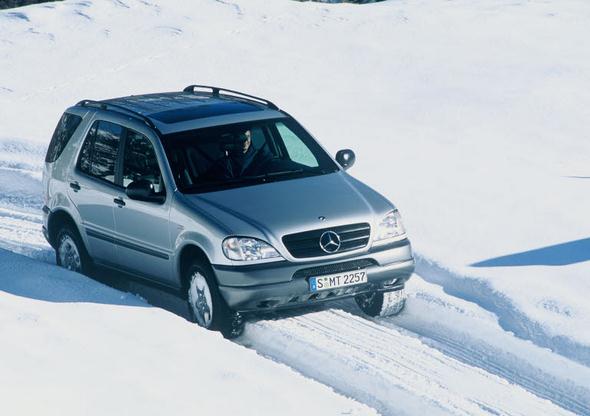 In January 1996 Mercedes-Benz unveiled at the North American International Auto Show in Detroit their concept study of a recreational vehicle featuring permanent all-wheel drive. This prototype of a sport/utility vehicle captured the visiting public’s attention with the future design elements of the Mercedes-Benz “All-Activity Vehicle” (AAV) which was then in an intensive stage of development. 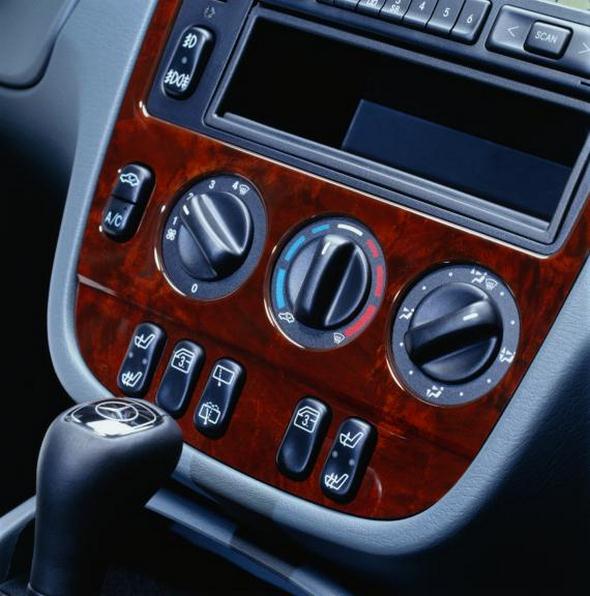 The European premiere of the AAVision design study took place two months later at the Geneva Motor Show. It was also there that the designation of “M-Class” as future name for the new member in the Mercedes-Benz passenger car family was communicated for the first time. 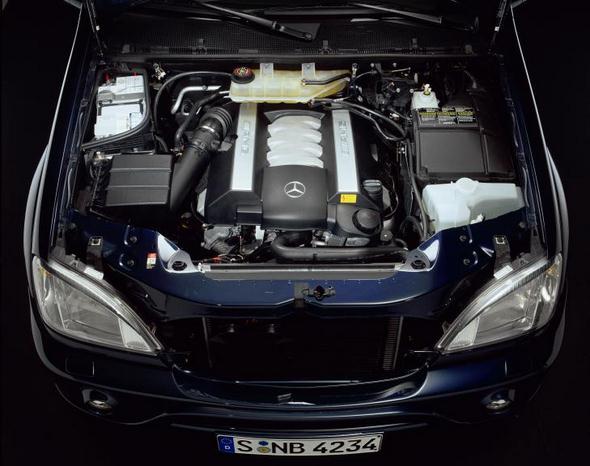 One year after the AAVision’s world premiere the public could take a first glance of the technology of the M-Class. The presentation included the chassis, the drive-train with intelligent four-wheel drive as well as the newly developed 3.2-liter V6-engine. A new torsion-resistant box-type frame forms the backbone of the safety-enhanced separate frame of the M-Class. 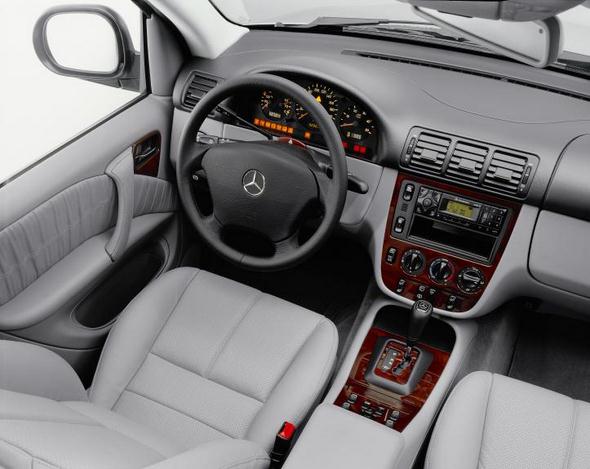 The two dropped frame side rails are welded to three cross members to assure a maximum of stability and torsional rigidity. There are deformational elements integrated in the front and rear cross members, absorbing the impact energy in an accident occurred at low speed to reduce damage at the frame side rails. 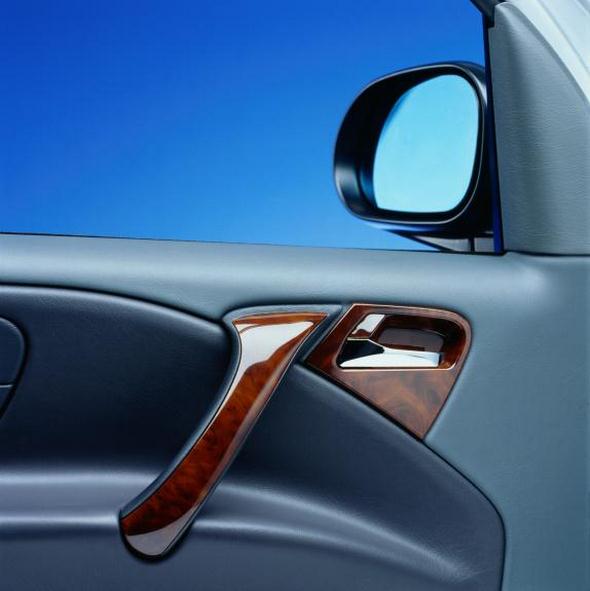 Supporting frames for front and rear wheel suspension and ten rubber mounts dampen the transmission of the road’s unevenness and noise to the bodywork. The chassis of the M-Class is unique. It is the only line of models of its family equipped with all-independent suspension on front and rear axle. 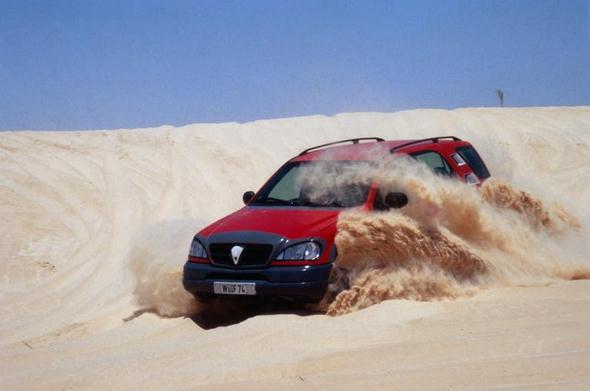 This concept does not only guarantee driving stability and security at a much higher level, but also it makes more chassis clearance under the engine possible. The wheels are guided at the front axle by two A-frame arms each, with the upper arm as well as the damper fixed directly to the frame; the front auxiliary frame supports the lower arm and the steering gear. 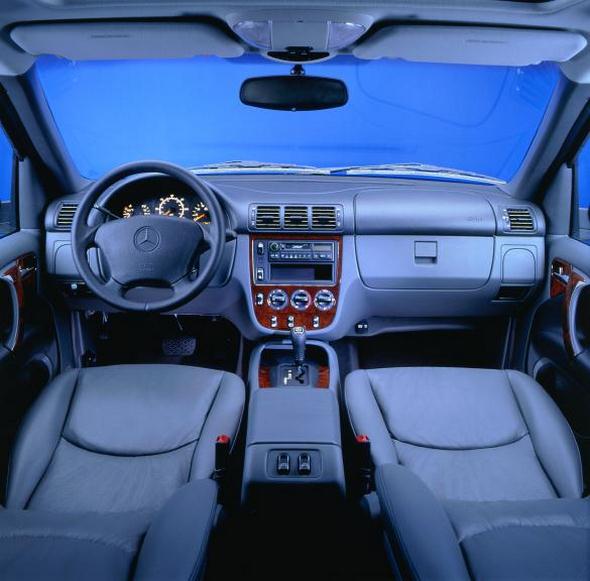 The wheel suspension/springing is done via torsion bars, upheld by the middle arm, and via an anti-roll bar at the lower A-frame arms. The structure of the rear wheel suspension is similar except for the springing which is done by a combination of coil springs and dampers with progressive spring action instead of the torsion bars.

At the rear axle the upper arm as well as the spring- and damper-elements are fixed directly to the frame whereas the lower A-frame arm and the anti-roll bar are supported themselves by an auxiliary frame.

The drive-train of the M-Class has been designed for the permanent all-wheel drive; the driving torque is distributed on the front and rear axle in a ratio of 48 : 52 via a one- and two-piece propeller shaft, respectively, by the transfer case with integrated interaxle differential. 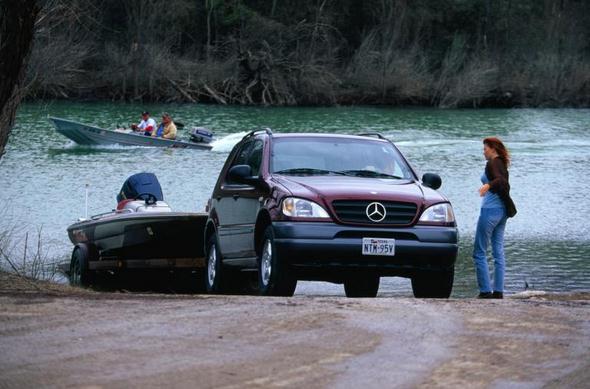 In contrast to the traditional four-wheel drive vehicles the drive system of the M-Class abandoned the differential locks of the conventional construction method. It has been made possible through a new version of the electronic traction control system ETS modified for the four-wheel drive.

In case of a wheel spinning on icy surface the ETS is activated automatically and increases the brake-pressure on the wheel as long as it takes to reach a certain given speed difference. 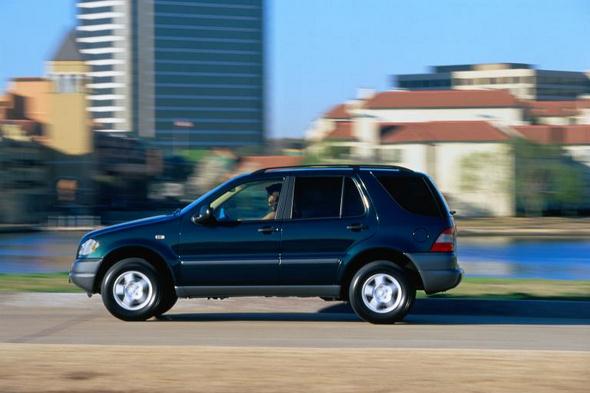 The driving torque on the wheels with good grip on the road is increased and a maximum of traction is achieved. The ETS replaces three conventional differentials to give the car the best grip and manoeuvrability on any ground. Even with difficult manoeuvres the steering ability and cornering stability are no longer limited.

The steering and braking system correspond just as well to the highest standards of security. Like the saloons and the station wagons of the E-Class, the M-Class is provided with rack-and-pinion power steering and the dual-circuit braking system comprises disk brakes at front and rear wheels with the front disks being internally ventilated. 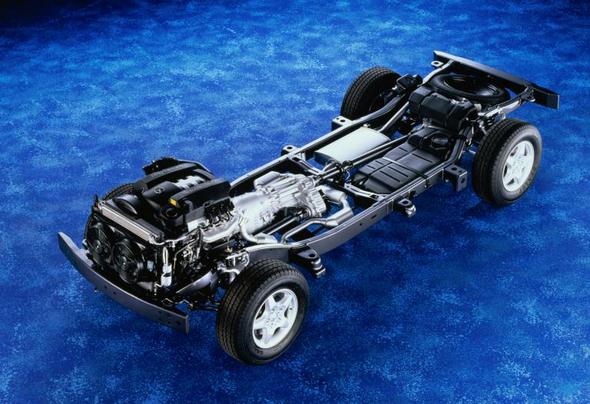 With the anti-lock system ABS, modified for off-road usage and part of the standard equipment, cadence braking is automatically employed to prevent wheels from locking up from a speed of 8 kph on, unconstrained by the road’s condition.

With the off-road reduction engaged and a speed of up to a maximum of 30 kph a special off-road algorithm is activated reducing the braking distance on loose gravel, for instance.

On May 21st, 1997, four months after the innovative chassis- and drive-concept had been presented in Detroit, the new sport/utility vehicle finally had its premiere in Tuscaloosa in the U.S. State of Alabama where the board of directors of Daimler-Benz inaugurated the same day the new plant for the production of the M-Class in presence of the governor of Alabama and more than 5,000 guests. 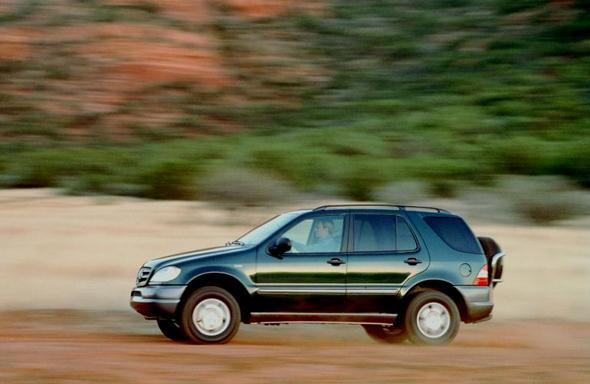 An extensive process of selection resulted on September 30th 1993 in the decision for Tuscaloosa, where the construction of the plant began on May 4th 1994. Three months later Mercedes-Benz U.S. International, Inc. (MBUSI), which had been founded for the development, planning and production of the M-Class, started a major campaign to recruit qualified staff for the new plant.

The first people were employed in spring 1995 and were trained intensively for their new jobs at Mercedes-Benz in Germany.

Production of the cars began in February 1997. The M Class, known internally as W 163 series, is not only an example of the company’s globalisation, but also the third new model range presented in 1997 after the CLK and the A-Class, another milestone in the product offensive.

It was received extremely favourably by the press and the public and production capacity is hardly able to cope with the strong demand. This success is due to a competitive price, the high safety standard, attractive design and the versatile concept.

The M-Class combines the comfort and driving safety of a Mercedes-Benz car with the off-road ability and robustness of an off-road vehicle. It also offers the space and variability of a large-capacity sedan. The rear seats are asymmetrically split and can be folded forwards creating more loading space. 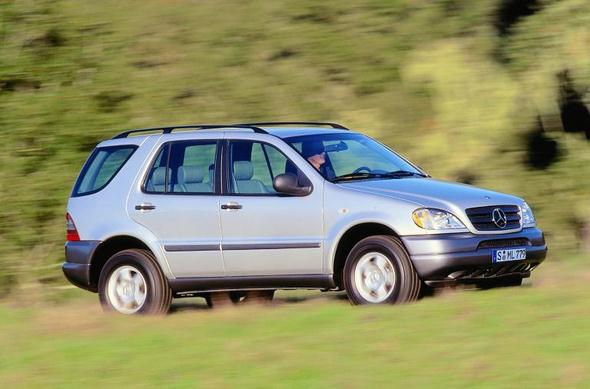 An additional rear seat can be supplied as an option for two passengers facing forwards and can easily be removed or folded away when it is not in use. The M-Class is also equipped with numerous technical innovations which further improve safety, comfort and economy.

These include the driving authorisation system ELCODE, an advance in theft protection and comfort operated by an electronic door and ignition key. Another innovation, the “Active Service System” ASSYST, improves economy by constantly analysing the quality of the oil in the engine. 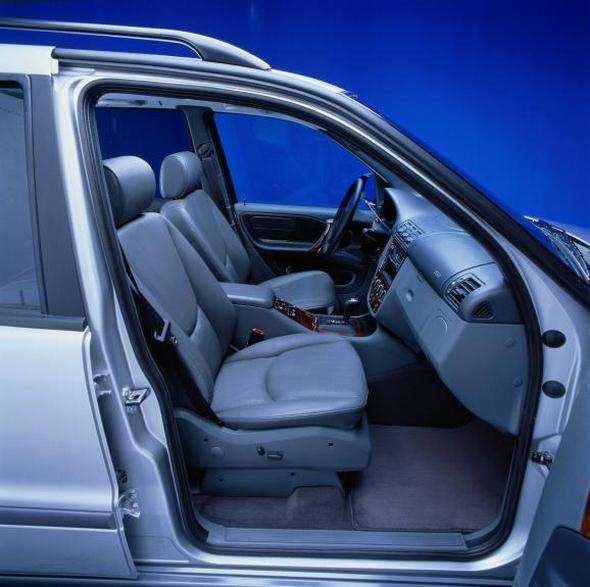 In this way service intervals are as long as they need to be, according to actual operating conditions, and have thus increased from a fixed 15,000 km to an average of 20,000 km. Safety relevant features are also up to the usual Mercedes-Benz standard: height adjustable automatic seat belts with tensioners and tension limiters for the front seats, front airbags and side-bags at the front – for the first time in an off-road vehicle.

With respect to passive safety the M-Class fulfils the standards required by the European Union from 1998 as well as future requirements in the USA; it also fulfils the demanding Daimler-Benz standards. Not only was the protection of occupants optimised and perfected, but also the injuries or damage done to other participants in a crash were minimised. 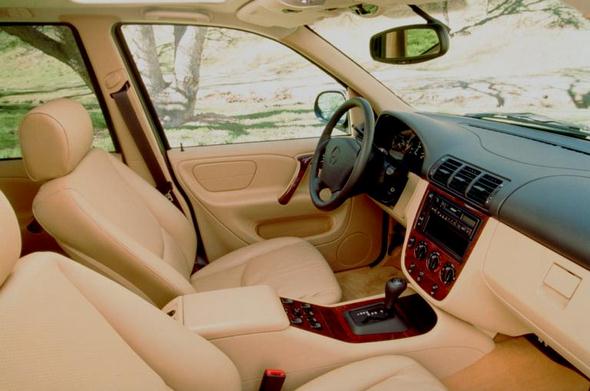 Market launch in the USA and Canada was in September 1997; at first the ML 320 was available with the 3.2-liter engine from the E-Class and CL. In the M-Class it develops 218 hp and is combined with the electronically controlled 5-speed automatic transmission.

The new V6-engine, which belongs to the M 112 series, includes a number of pioneering innovations such as 3-valve technology, twin ignition and low friction cylinder liners. It is produced in the ultra-modern engine plant in Bad Cannstatt, which was officially opened on 9 April 1997, six weeks before the Tuscaloosa plant. 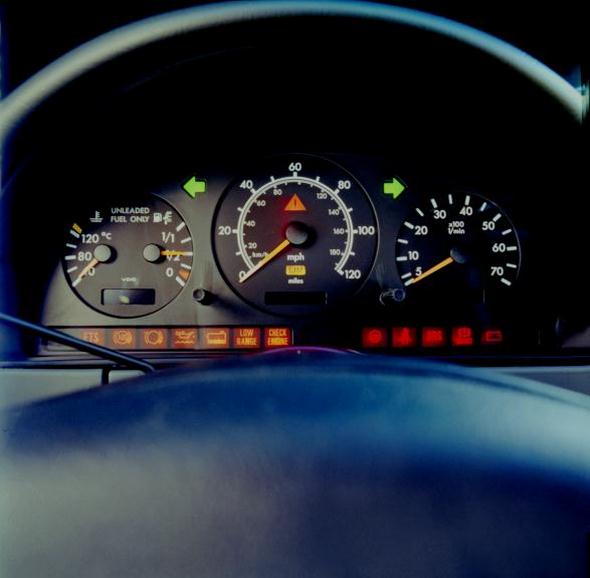 The M-Class has been on sale on the European market since March 1998. As well as the ML 320, a cheaper version is available with a 2.3-liter 4-cylinder engine. This 150 hp unit is also from the standard Mercedes-Benz engine range and had already been used in the C-Class and the E-Class.

The ML 230 has 5-speed manual transmission and, unlike the more powerful version, no air conditioning as standard equipment.

In January 1998 a new M-Class variant, the ML 430, was presented at the North American International Auto Show in Detroit. The new top-of-the-range model is powered by the199 kW (270 hp) 4.3-liter V8-engine with 3-valve technology and dual ignition, which has been used since September 1997 in the E-Class.

In addition to the electronic 5-speed automatic transmission, the basic equipment range includes the four-wheel drive system 4-ETS, which is fitted together with the driver safety system ESP and “Brake Assist” BAS in the ML 430 model.

Leather trim, air conditioning and heated front seats complete the standard specification list. The ML 430 confirms its status as the top-of-the-range model with color-coded bumpers, side skirts and lateral protection panels as well as restyled 17-inch wheels with 275/55 R 17 format tires. The German market launch of this model will take place in May 1999. 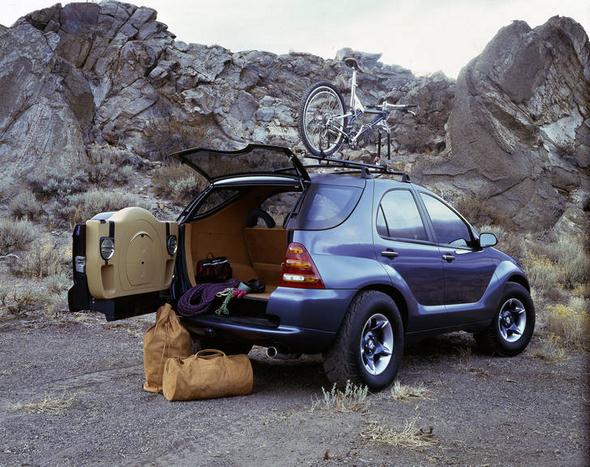 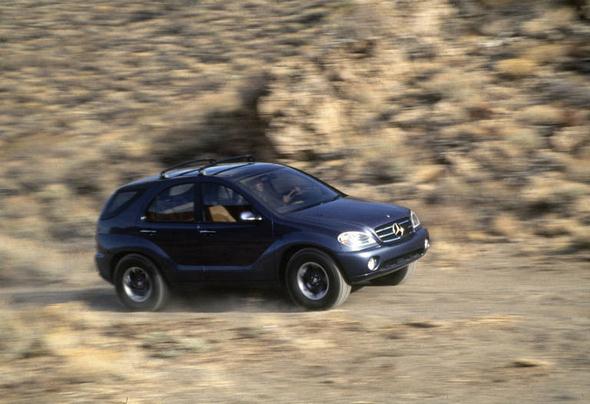 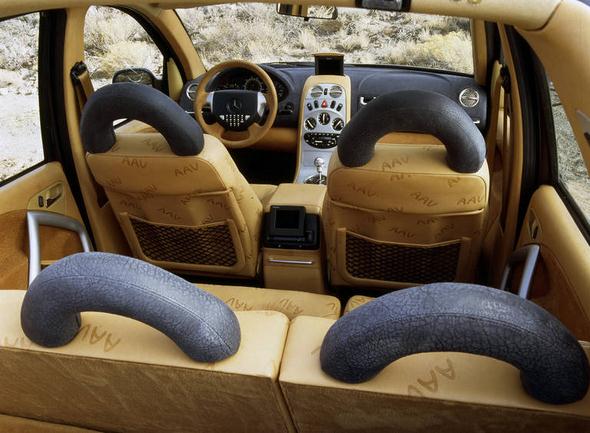 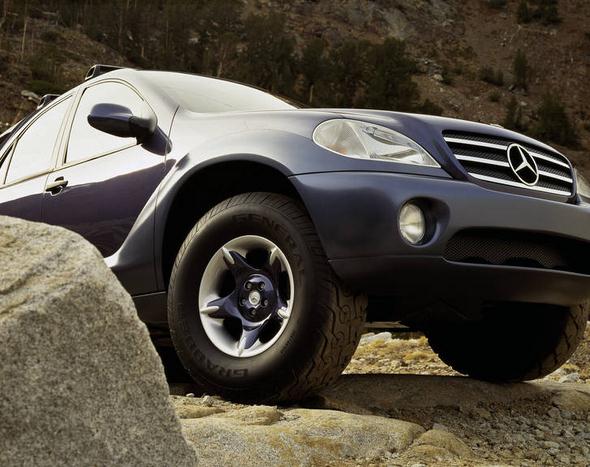 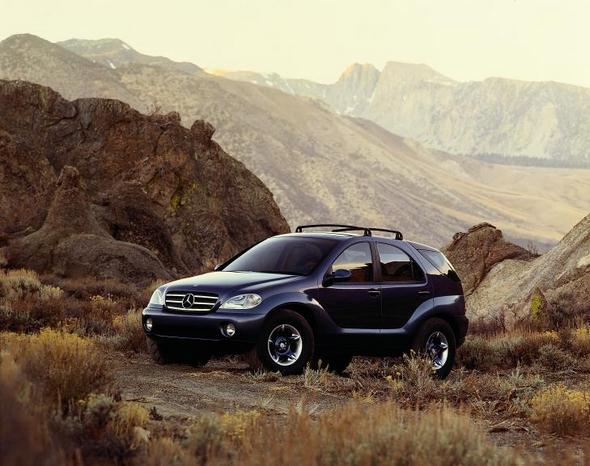 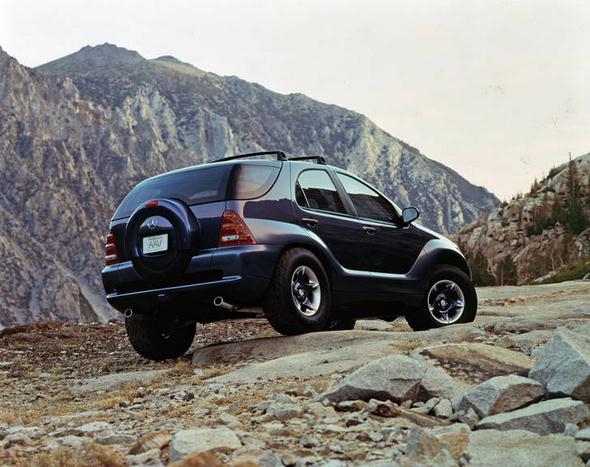