The Mercedes-Benz W212 is a sedan sold as the ninth-generation E-Class, replacing the previous W211 model. C207 is the chassis code for the related E-Class Coupe, a replacement for the CLK-class coupe and cabriolet. The new E-Class went on sale in Europe in March and in America in July 2009.

The design of the W212 and C207 E-Class is inspired by the ConceptFASCINATION design study. Certain elements of the exterior styling are also taken from the preceding W204 C-Class and W221 S-Class. The bulging rear wheel arches are meant to be reminiscent of the fender flares of historic Mercedes models.

It also includes features that improve performance, efficiency, and comfort, such as “Direct Control” adaptive suspension, active seats (which change shape to support the passengers in corners), and movable radiator louvers which improve the vehicle’s aerodynamics.

Standard Mercedes-Benz safety and convenience features, such as the Electronic Stability Program (ESP), airbags, and automatic climate control, are included as well. 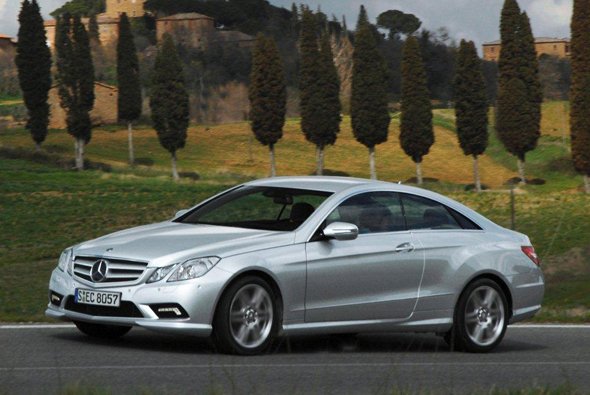 The 2009 E-Class Coupé was unveiled at the 2009 Geneva Motor Show and went on sale in May 2009. The C207 E-Class Coupe is related to the W212 sedan, sharing approximately 60 percent of its mechanical components. The E-Class Coupe also possesses many of the same new and standard features of the sedan. 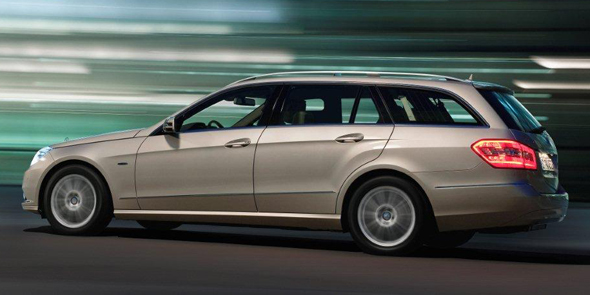 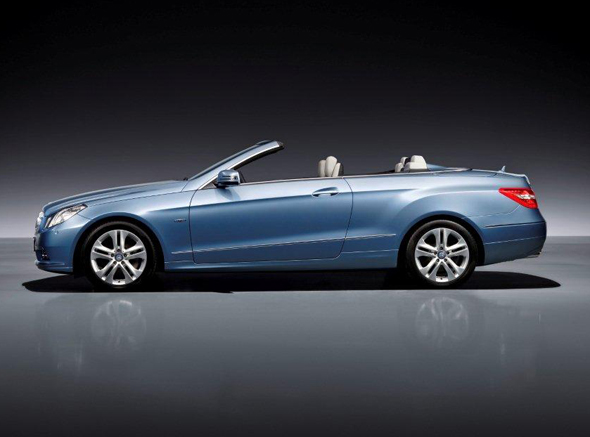 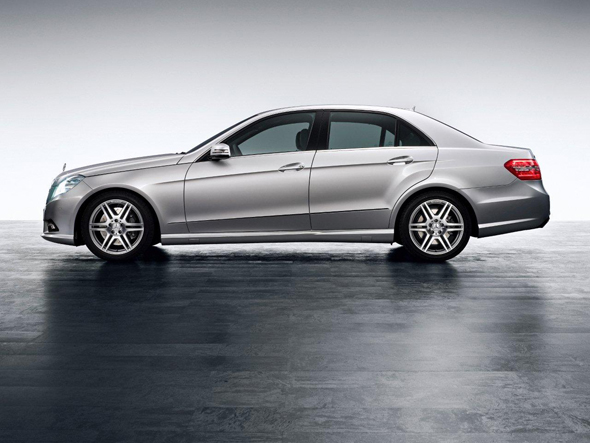 The 2009 E63 AMG sedan was unveiled at the 2009 New York International Auto Show. The new performance version of the E-Class is fitted with the same powertrain as the SL63 AMG, including AMG’s 6.2-liter V8 and the SPEEDSHIFT MCT 7-speed sports automatic transmission with four driver-selectable modes including a fully manual mode.

Similar to the C63 AMG, the new E63 is more extensively modified than before, with a new, wider front axle, heavily revised suspension, and more distinct body panels.

The E-Guard armoured version, which features VR4 (formerly B4) level protection, went on sale in April 2009. The vehicles are equipped with steel and aramid fiber (Kevlar) armour and bullet-resistant windows, as well as run-flat tyres rated for a top speed of 240 kilometres per hour (150 mph) (50 kilometres (31 mi) at 80 kilometres per hour (50 mph) when deflated), a special Level II version of the Airmatic air suspension system, emergency alarm system, intercom system, and underbody armour.

The E 250 BlueTEC is a concept vehicle based on the E 250 CDI BlueEFFICIENCY sedan, but with urea injection and the 7G-TRONIC transmission. The vehicle was unveiled at the 2009 New York Auto Show. The E 250 BlueTEC is capable of 28 MPG city/39 MPG highway. 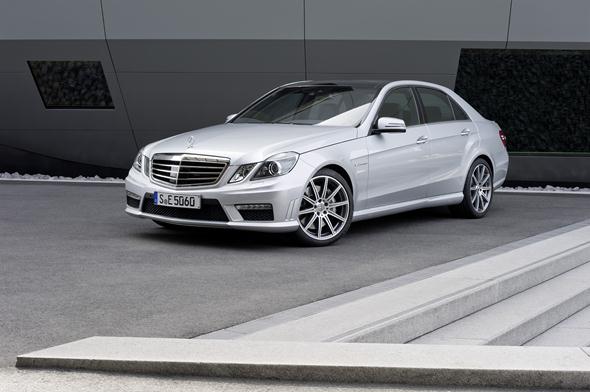 Benchmark for dynamism and efficiency

Affalterbach – The E 63 AMG is now even more powerful and efficient. As part of the “AMG Performance 2015” model strategy, the high-performance vehicle now benefits from the new 5.5-litre V8 biturbo engine. 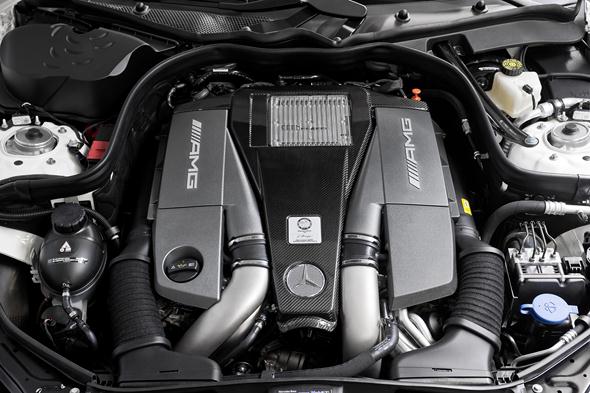 This unit, already familiar from the CLS 63 AMG, delivers an output of  386 kW (525 hp) to 410 kW (557 hp), together with an impressive reduction in fuel consumption: the E 63 AMG consumes 9.8 litres per 100 kilometres (Estate 10.0 litres) according to NEDC combined, in other words 22 percent less than its predecessor with the AMG 6.3-litre V8 naturally aspirated engine.

An important contribution is also made here by the newly developed electromechanical AMG speed-sensitive sports steering system, which only draws power when the vehicle is actually being steered. Additional assistance systems now raise occupant safety to a whole new level.

This eight-cylinder powerhouse, designated internally as the M 157, boasts a combination of innovative high-tech components: in addition to spray-guided direct petrol injection with piezo injectors, these include a full aluminium crankcase, four-valve technology with camshaft adjustment, air/water intercooling, generator management and a stop/start system. 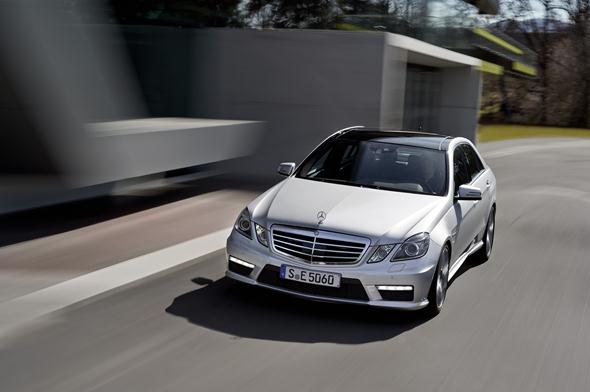 Both variants of the E 63 AMG achieve exceptional performance: acceleration from zero to 100 km/h takes 4.3 and 4.2 seconds respectively (Estate: 4.4 and 4.3 seconds), and the top speed is 250 km/h (electronically limited).

Despite its increased output, higher torque and improved performance, the new E 63 AMG shows an improvement of 2.8 litres in fuel efficiency compared with the previous model with V8 naturally aspirated engine.

Fuel consumption, at 9.8 litres per 100 kilometres according to NEDC combined, corresponds to CO2 emissions of 230 grams per kilometre (Estate: 10.0 l/100 km; 234 g/km). Both variants achieve the same consumption and CO2 figures either with or without the AMG Performance package and so take the lead in a competitive comparison. 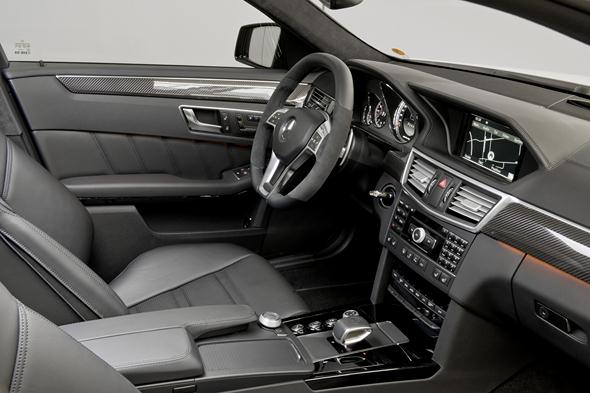 Key data at a glance:

The improvements in output and torque that come with the AMG Performance package can be attributed primarily to an increase in the maximum charge pressure from 1.0 to 1.3 bar. Visible differentiation is provided by the exceptionally high-quality engine cover in genuine carbon fibre.

The AMG Performance package also includes the AMG Performance steering wheel with black Alcantara in the grip area, red-painted brake callipers and, in the case of the Saloon, the genuine carbon fibre AMG spoiler lip on the boot lid and the electric rear window blind. 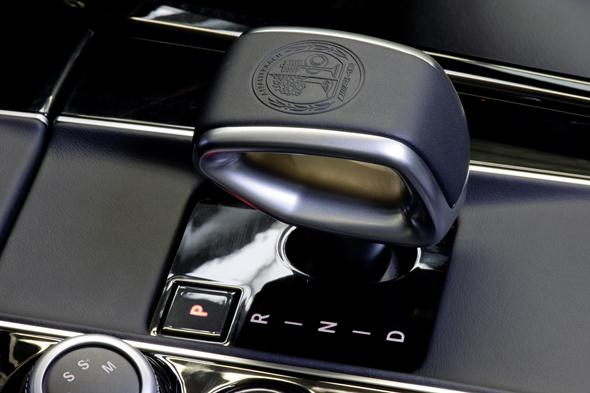 A major contribution to the car’s exemplary consumption figures is also made by the AMG SPEEDSHIFT MCT 7-speed sports transmission. In place of a conventional torque converter, this uses a compact wet start-up clutch.

The E 63 AMG also features a stop/start function as standard: this is active in the Controlled Efficiency (“C”) transmission mode and switches the eight-cylinder engine off when the vehicle comes to a standstill.

The stop/start function can be activated or deactivated using the ECO button on the centre console. When in transmission mode “C”, the vehicle will always start up in second gear. The system will also change gears noticeably early and avoid high engine speeds. Demand-driven delivery of fuel and a generator management system with braking energy recuperation during deceleration add further to the economic use of fuel. 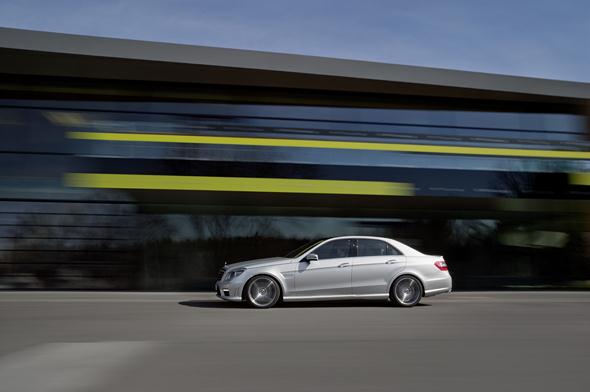 In all three transmission modes, not only is the stop/start system deactivated but, at full load, the engine management system partially suppresses the cylinders. This carefully managed interruption to ignition and injection results in faster gear changes and an emotive acoustic effect. The automatic double-declutching function in reverse gear provides the perfect complement.

The E 63 AMG features the AMG RIDE CONTROL sports suspension with a specially designed front axle: the track has been widened by 56 millimetres and includes independent wheel carriers, for increased negative camber at the front, giving clear benefits in terms of grip when driving fast through bends. 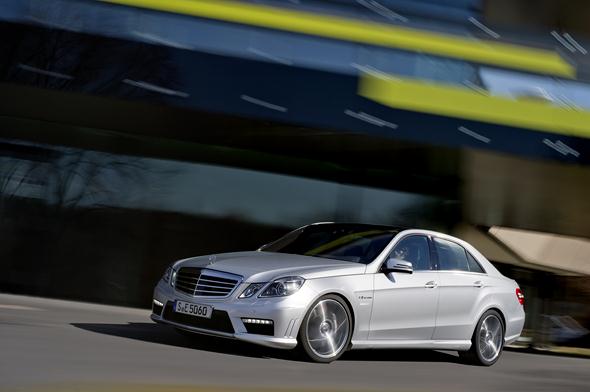 The result: lightning-fast adjustment between optimum driving comfort and the best possible agility. The driver can switch between the three suspension modes of “Comfort”, “Sport” and “Sport plus” at the touch of a button.

The steering system on the E 63 AMG is also new: the electromechanical AMG speed-sensitive sports steering features a more direct ratio of 14:1 and variable power assistance that adapts according to the suspension mode. The result: extremely agile handling through bends. The steering also helps to reduce fuel consumption, since the power assistance system only draws power when the vehicle is actually being steered. 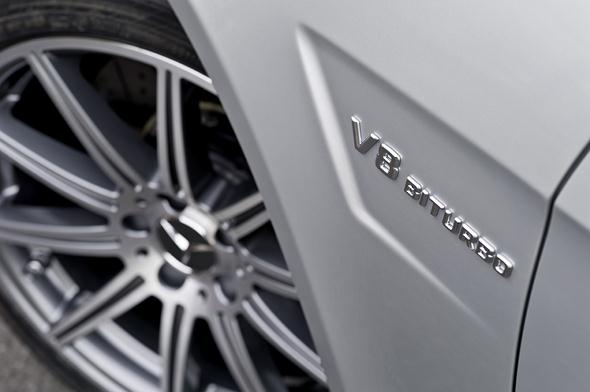 Optimum grip comes courtesy of the new 18-inch AMG light-alloy wheels in a 10-spoke design, fitted with 255/R40 R 18 tyres on the front and 285/35 R 18 on the rear. The “flowforming” production process already used with the SLS AMG and the CLS 63 AMG optimises durability, while also reducing weight by up to 0.8 kilograms per wheel.

Externally, the E 63 AMG with the new M157 engine is identifiable by its new light-alloy wheels and by the “V8 BITURBO” lettering on its distinctive, wider front wings. Further characteristic features to aid recognition include AMG bodystyling with a specific design for the front and rear, along with AMG side sill panels and an AMG sports exhaust system with two chrome-plated twin tailpipes.

A striking feature of the high-quality, exquisitely crafted interior is the new AMG Performance steering wheel in a three-spoke design. The rim of this wheel, which is already used in the CLS 63 AMG, is flattened at both top and bottom to facilitate even better control of the vehicle.

Further identifying features of the new steering wheel: aluminium shift paddles, the perforated leather in the grip areas and the three-dimensional design of the airbag cover with its “Silver Shadow” metallic trim element. This is complemented by the new E-SELECT shift lever with embossed AMG badge. 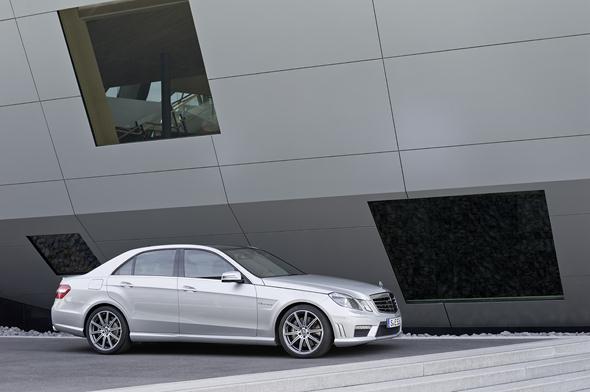 Similarly adopted from the CLS 63 AMG is the three-dimensional full-colour
TFT display in the centre of the speedometer. The driver is welcomed by a striking AMG logo that shows here as soon as the door is opened.

Special optional extras from the AMG Performance Studio can also be added ex factory to give the E 63 AMG even more individual flair: 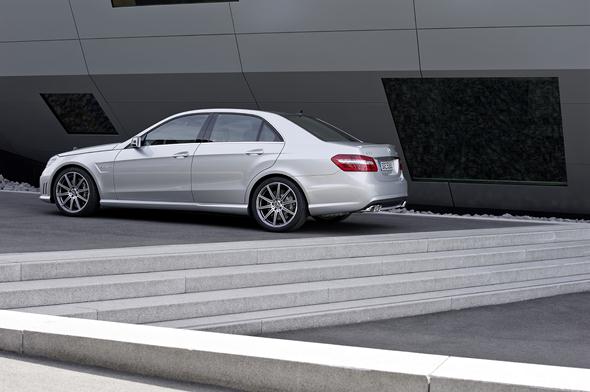 With immediate effect, over a dozen driver assistance systems in the E 63 AMG help to avoid traffic accidents or mitigate the severity of an accident. Among the new systems are Active Blind Spot Assist and Active Lane Keeping Assist. Active Blind Spot Assist warns the driver if the short-range radar sensors detect that there is a risk of collision should the vehicle change lanes.

If the driver ignores these warnings and comes dangerously close to the vehicle in the next lane, Active Blind Spot Assist will intervene. By applying braking force to the wheels on the opposite side of the vehicle, controlled through the 3-stage ESP® system, a yaw movement is created which counteracts the collision course.

Active Lane Keeping Assist is also linked to the 3-stage ESP®. This system kicks into action if the driver inadvertently drifts over a solid line to the right or left of a lane. In this case, Active Lane Keeping Assist brakes the opposite wheels and thereby prevents the vehicle from crossing the line. A display on the instrument cluster warns the driver at the same time. 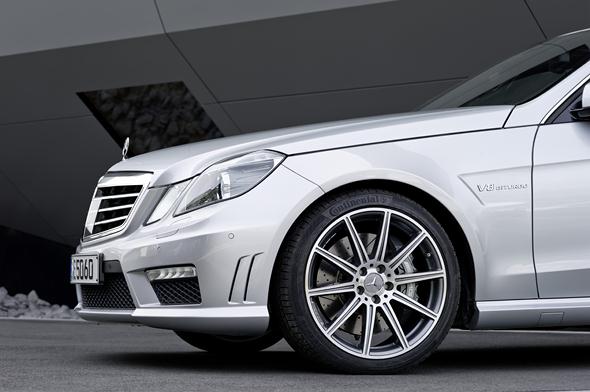 If broken lane markings are crossed, the system controls an electric pulse generator in the steering wheel which generates vibrations for a short time – a discreet but highly effective cue to countersteer immediately. Before the braking system intervenes, the steering wheel always vibrates to provide a warning.

The E 63 AMG with the new AMG 5.5-litre V8 biturbo engine is available in either Saloon or Estate versions, with the market launch beginning in September 2011. Sales prices remain at the same level as for the previous model (all prices shown inclusive of 19% VAT): 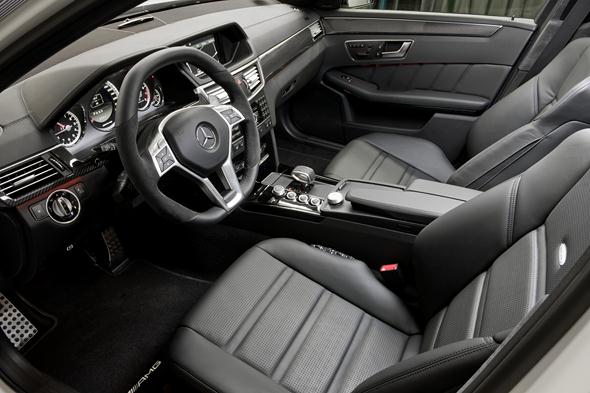