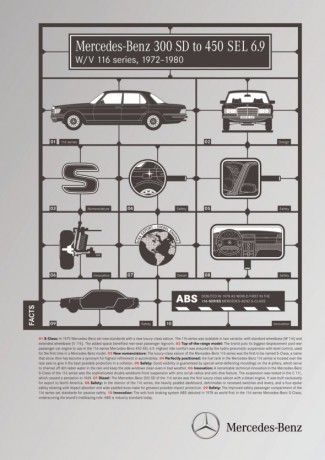 Stuttgart – The luxury class saloons of the Mercedes-Benz brand have borne the “S-Class” name for what seems like an eternity. Yet in fact this has only been the case since 1972: this was the year in which the new luxury class model series designated internally as the 116 made its official debut under the S-Class name, initially in the form of the 280 S, 280 SE and 350 SE. In 1975 the brand brought out a new top-of-the-range model which set standards in many respects: the Mercedes-Benz 450 SEL 6.9 boasted the largest engine capacity for a saloon at that time, providing sports car-like levels of performance. 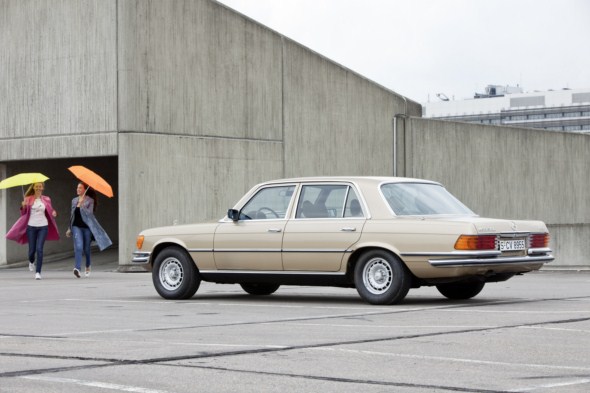 In 1977, the 300 SD model also set standards: it became the first Mercedes-Benz luxury class saloon to feature a diesel engine, and at the time was destined exclusively for export to North America. It was also a pioneering model, however – today the diesel engine is a natural alternative to the petrol engine in all vehicle classes. 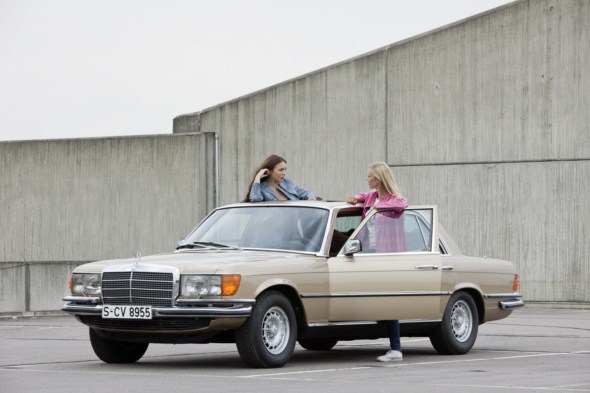 The S-Class has always been an innovation driver and has introduced a variety of new technological automotive products and features which have set standards across the sector. The same is true of the 116 model series. In the brochure dating from 1972, the brand declared in a confident and appropriate manner: “Mercedes-Benz vehicles have […] reached such a high technical standard that it did not seem possible to be able to achieve any further advances of discernible significance. 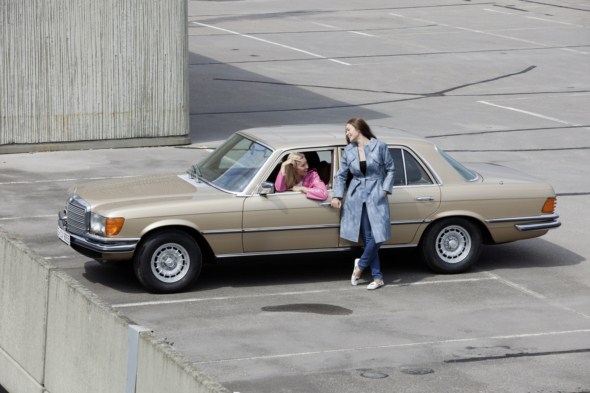 Nevertheless, this is precisely what we have succeeded in achieving with the new S-Class – by pushing the physical and technical boundaries of modern automotive engineering. Currently it is not possible to imagine a better overall solution. In some areas it has been possible to make such substantial advances that we are able to talk about new dimensions of driving characteristics, safety and comfort.” 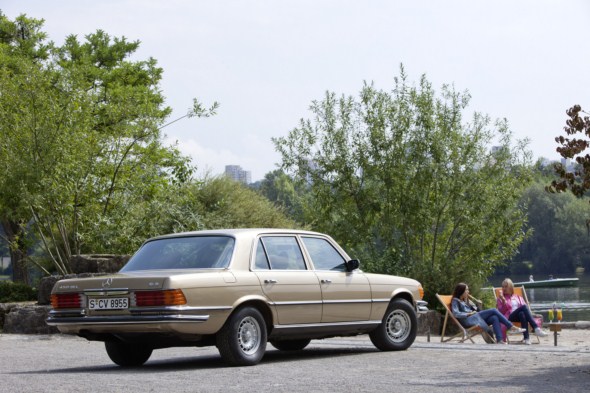 This is true: the 116 series scored highly in many areas, with such innovations as the double-wishbone front suspension, for example, which had been used for the first time in 1969 in the C 111 prototype vehicle. The S-Class was designed consistently on the basis of results gathered from safety research, right through to the interior which in many areas was built with a view to keeping the risk of injury to an absolute minimum. The fuel tank was installed over the rear axle to provide protection in the event of a collision. 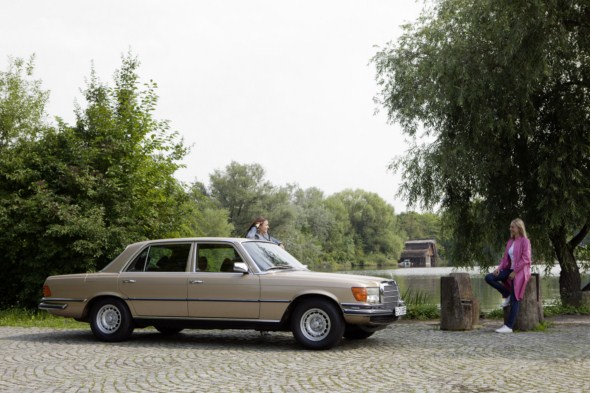 And 1978 witnessed the debut of an epoch-making innovation in the area of safety:
Mercedes-Benz premiered the world’s first anti-lock braking system (ABS) in the 116-series S-Class – and what had been a long-standing dream of the engineers became a reality. The sheer number of innovative details means that such an S-Class is still up-to-date even today, and as such it is a true modern classic. 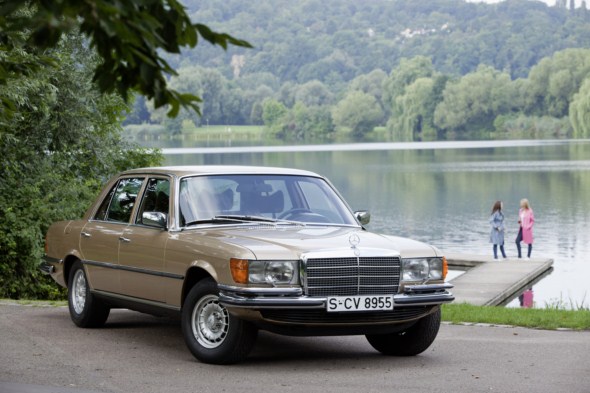 This aspect is also reflected in the design of the model series: it clearly places the vehicle in the 1970’s, yet it is still by no means archaic. The designers of the brand skilfully crafted the 116 series with lines which have kept it fresh during its time – and still keep it fresh today. 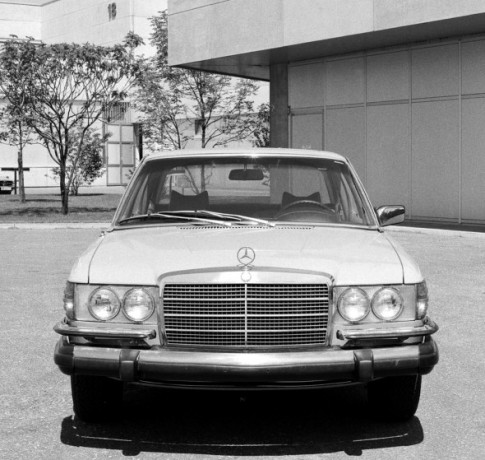 Driving a 116-series S-Class today provides just as high a standard of ride as ever. Even long distances can be covered comfortably in the Saloon, as the spaciousness and comfort of the normal S-Class already set standards. The long-version offers almost regal levels of comfort with its longer legroom in the rear. Sometimes you might even wish you had a chauffeur to drive you – although taking to the wheel yourself affords immense joy, enabling the quality and precision of the whole vehicle to be experienced. 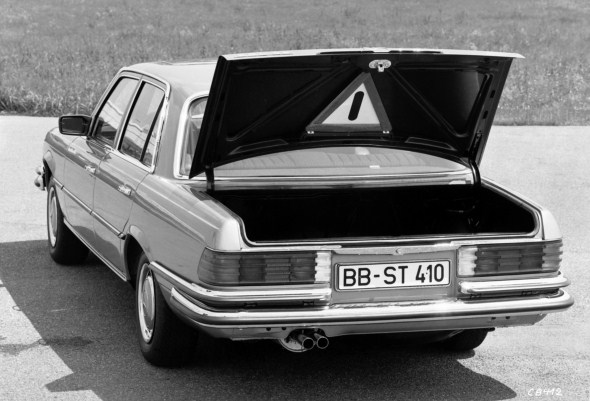 Mercedes-Benz makes it easy to look after a modern classic from the moment of taking ownership thanks to the brand’s excellent provision of spare parts and the available know-how: almost every part can be obtained via Mercedes-Benz partners and the company’s own ordering system, with delivery for the most part taking place overnight. Some authorised workshops have also even been appointed as Classic Partners – they are able to demonstrate outstanding expertise with older vehicles. 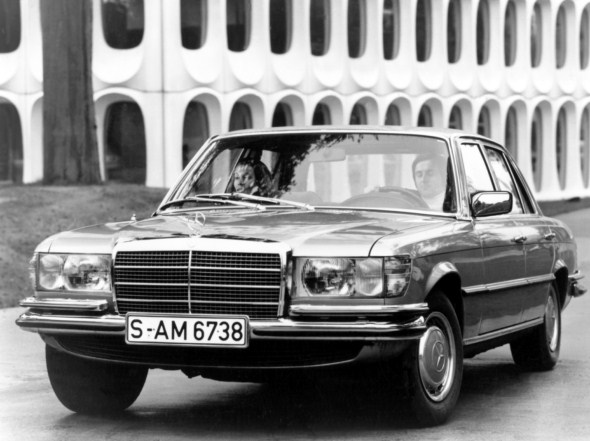 Furthermore, anyone looking for a modern classic is also likely to strike it lucky with the manufacturer: Mercedes-Benz Young Classics is the division specialising in such vehicles, and offers several examples in its vehicle range – all in excellent condition and with a traceable history, such that they could almost pass for new vehicles. So convinced is it of their quality that Mercedes-Benz Young Classics even offers a warranty for the vehicles – something which is unique in the automotive sector. 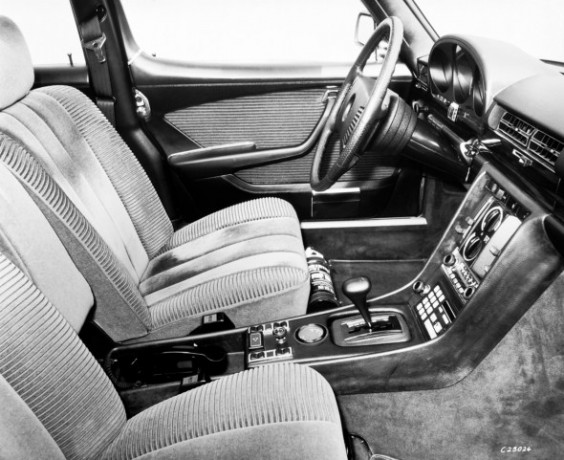 A brand-new premium-class vehicle generation was presented to the public in September 1972. The first officially designated “Mercedes-Benz S-Class” – internal designation W 116 – replaced the W 108/109 series and was initially comprised of three models: the 280 S, 280 SE and 350 SE. The 280 S and 280 SE models featured the six-cylinder M 110 engine with dual overhead camshafts that had made its debut in the W 114.

Six months later the S-Class saloon was also offered with the larger 4.5-litre V8 engine in parallel to the 450 SL and 450 SLC. At the same time the 450 SEL was introduced, its wheelbase lengthened by an extra 100 millimetres; as with its predecessor models, the additional space served to increase legroom in the rear. The long version was also available from November 1973 as a 350 SEL and from April 1974 as a 280 SEL. 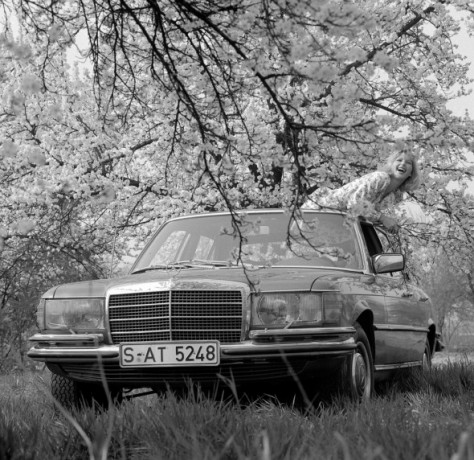 One noteworthy engineering innovation first featured as standard in the 116-series saloons was the double-wishbone front suspension with zero-offset steering and anti-dive control, as tested originally in the C 111 experimental vehicle. This permitted further dynamic handling improvements. Rear suspension was essentially the same as the design that had by this stage been tried and tested over many years in the Stroke Eight models, and which was also in use in the 350 SL. The 4.5-litre models were fitted with a coupled-link axle. 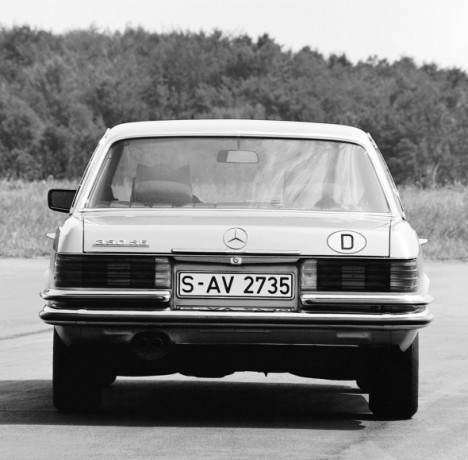 In terms of passive safety too, the S-Class was at the forefront of engineering. The variety of safety design features integrated for the first time into the 350 SL were of course included without exception in the S-Class saloons. The fuel tank, for example, was no longer positioned in the rear end but above the rear axle for protection in case of accident; in the interior, maximum protection was offered by the heavily padded instrument panel, yielding or recessed switches and levers, and a four-spoke safety steering wheel with impact absorber and broad padded boss. 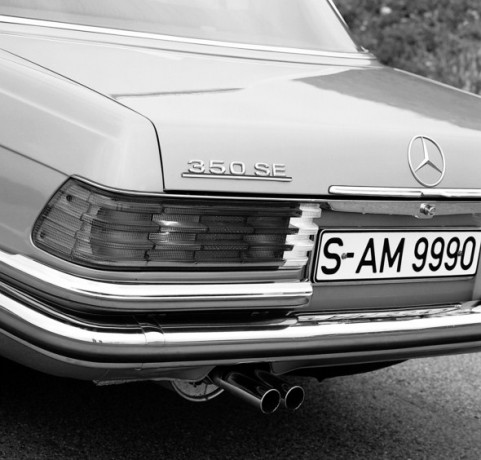 The most significant improvement over the predecessor series was the even stronger safety passenger cell with stiffened roof-frame design, high-strength rigid roof and door pillars and reinforced doors. By controlling the deformability of front and rear end it was also possible to improve energy absorption considerably in the front and rear crumple zones.

Special wind deflectors on the A-pillars guaranteed good visibility. In wet conditions these served as channels for dirty water, keeping the side windows clean in bad weather. Other safety features included wrap-around turn indicator lamps that provided good visibility even from the sides, and large rear lights, which offered good resistance against soiling thanks to their ribbed surface profile. 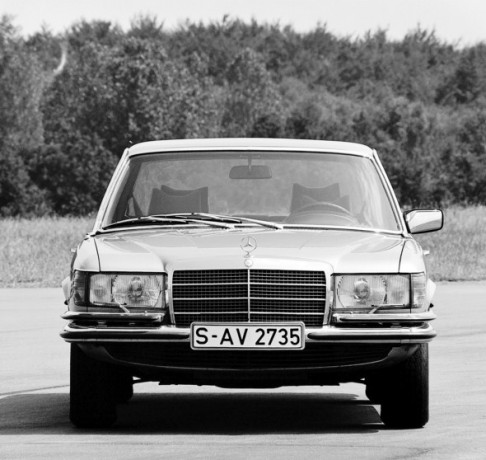 In May 1975 the company presented the 450 SEL 6.9 – the new top model in the series and true successor to the Mercedes-Benz 300 SEL 6.3. The powerful 6.9-litre V8 engine, developed from the highly successful 6.3-litre unit, achieved an output of 210 kW and maximum torque of 56 mkg (549 Nm). The hydropneumatic suspension with self-levelling – featured for the first time in a Mercedes-Benz passenger car – guaranteed the utmost in ride comfort. 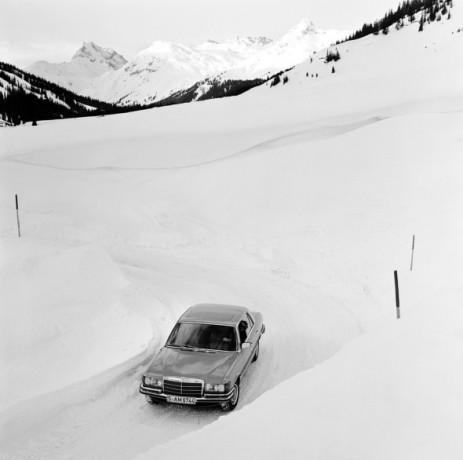 Other special equipment included in the standard specification for the top-of-the-range model were the central locking system, air-conditioning and a headlamp wash/wipe system. As was the case with its direct predecessor, the 450 SEL 6.9 proved an immediate success; although it was more than twice as expensive as the 350 SE, a total of 7380 units were built during its four-and-a-half year production period.

Between November 1975 and February 1976 the direct fuel injection system in the 2.8-litre, 3.5-litre and 4.5-litre injection engines was converted to fall in line with more stringent emissions standards now in force in most European countries.

The electronically controlled Bosch D-Jetronic was abandoned in favour of the newly developed mechanically controlled Bosch K-Jetronic. In all three cases conversion was achieved with only minor loss in output; at the same time, compression was slightly reduced in the 2.8-litre and 3.5-litre engines. For ease of maintenance these modifications also included breaker-less transistorized ignition and hydraulic valve clearance compensation for both V8 engines. 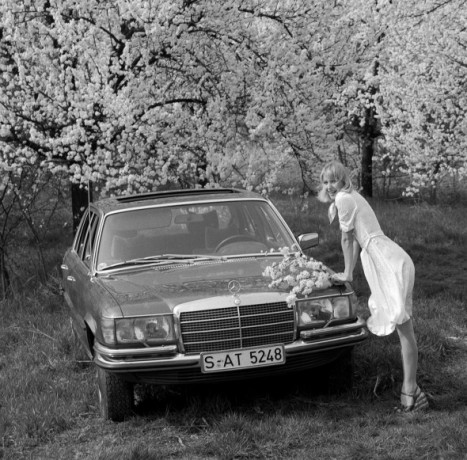 As with the 2.8-litre injection engine, compression was also reduced in the carburettor engine, similarly causing a slight decrease in output. Two years later, from April 1978, the original output was once again offered in all three models with injection engines. In contrast to the carburettor version, compression in the 2.8-litre injection unit was raised to its old value, and the previous output in the two V8 models was achieved largely by modifications to the exhaust system.

In May 1978 the model range of the 116 series was expanded even further. As the latest addition to the family, the 300 SD attracted just as much attention among connoisseurs as the 450 SEL 6.9 had done three years earlier – although it was positioned at the opposite end of the performance scale. For the first time in the history of this vehicle category, the new S-Class model was powered by a diesel engine. The 3.0-litre five-cylinder unit, that had proved so successful in the mid-range 240 D 3.0 and 300 D models, was given a turbocharger for its new role, enabling output to be increased to 85 kW.

Development of this unusual S-Class variant, which was offered exclusively in the USA and Canada, was begun with the aim of meeting the fuel consumption standards recently introduced by the US government. The most decisive factor here was the so-called Corporate Average Fuel Economy, an invention of the Carter administration, which denoted the average fuel consumption of all passenger car models in a manufacturer’s range. By extending the range to include conventional economical diesel models it was possible to bring the fleet’s average fuel consumption under the legal limit.

A technical innovation of ground-breaking significance was offered as a world exclusive in the S-Class saloons of the 116 series from the autumn of 1978: the anti-lock braking system (ABS), developed in collaboration with Bosch, which guaranteed a vehicle’s unrestricted steering response even under emergency braking and thus made a vital contribution to active safety. Today almost commonplace and available even in small cars, at the time of market launch ABS was seen as nothing short of sensational. 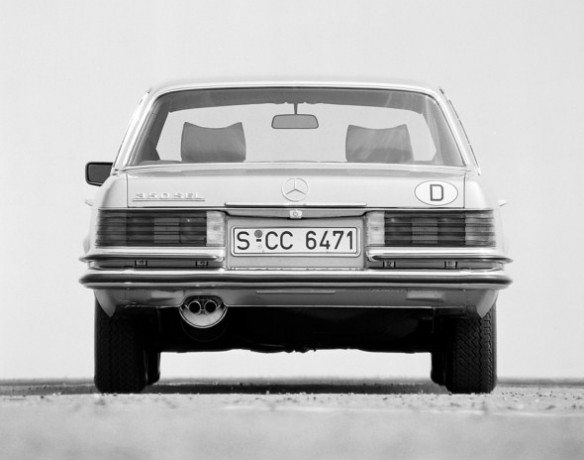 Safety of a rather different nature was offered by the armoured version of the 116 series. Protection design underwent further improvements based on the experience gained during development of the armoured 280 SEL 3.5. Taking the eight-cylinder models as a whole – the 350 SE, 350 SEL, 450 SE and 450 SEL – a total of 292 units were built as armoured vehicles for delivery to special customers, including many state institutions in Europe and overseas. 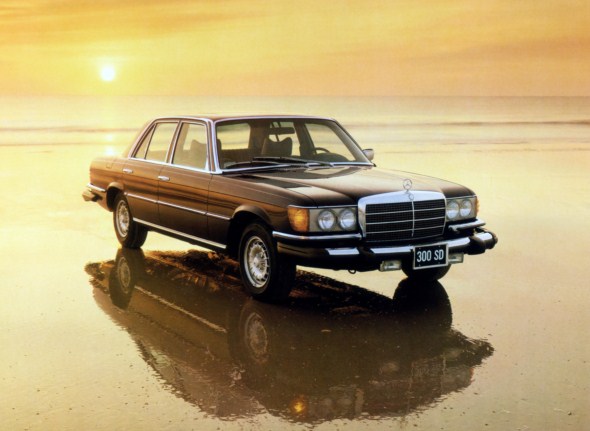 The successors to the first S-Class series – the W 126 models – were presented in September 1979 at the Frankfurt IAA. But that did not put an immediate end to the 116 series; production was gradually phased out for each model between April and September 1980. Of the 473,035 units built in this model series, the last vehicle to leave the Sindelfingen plant was a 300 SD model.