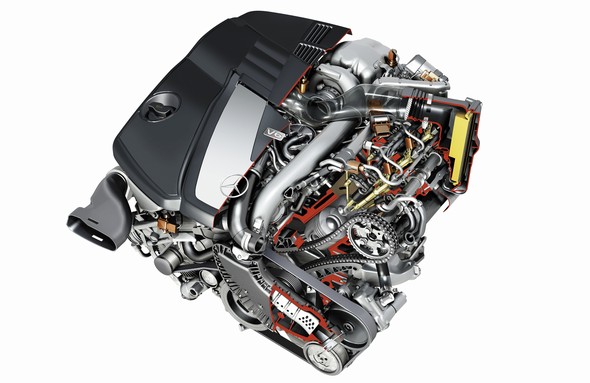 Mercedes-Benz is presenting a new V6 diesel engine which will replace the previous in-line five and six-cylinder engines from spring 2005. With an output of 165 kW/224 hp and a maximum torque of 510 Newton metres, the Mercedes six-cylinder is one of the most powerful units in its class. Thanks to the latest technology, the exhaust emissions meet the stringent EU4 limits; in addition Mercedes-Benz equips the V6 engine with a particulate filter as standard in Germany.

The concept of diesel driving pleasure achieves a new quality with the new CDI engine. As the successor to the five and six-cylinder in-line engines it offers an increase in output and torque of up to 38 percent, ensuring faster acceleration, brisk intermediate sprints and a higher top speed. The maximum torque of 510 Newton metres is already available from 1600 rpm, and remains constant up to 2800 rpm. Accordingly the new V6 has torque characteristics which are unsurpassed in this displacement class. In combination with the unique 7G-TRONIC seven-speed automatic transmission, this ensures the best possible exploitation of the remarkable output and torque potential in any driving situation.Despite a significantly higher output, the fuel consumption remains at the exemplary level of the previous five and six-cylinder diesel engines.

The choice of materials, design, fuel injection and engine management system reflect the state of the art. As a world first for a diesel engine in this displacement and output class, Mercedes-Benz has developed an aluminium crankcase with cast-in grey iron cylinder liners for this unit which makes a major contribution to weight reduction. As a result, the new V6 weighs a total of only approx. 208 kilograms (acc. to DIN) and is therefore only very slightly heavier than the previous five-cylinder engine. The power-to-weight ratio has increased by more than 20 percent to 0.79 kW/kg – a major contribution to the outstanding diesel agility offered by the new engine. 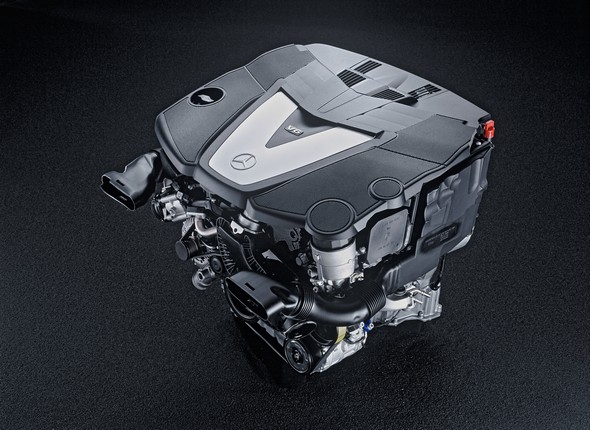 The engine block, components and ancillary units form a very compact entity, which means that in future the new V6 will also be installed in Mercedes model series and 4MATIC variants where no six-cylinder diesel engine was previously offered.

Mercedes engineers have refined the common-rail direct injection system, achieving further progress in fuel consumption, exhaust emissions and combustion noise with this third-generation technology. Newly developed piezo injectors operate much more rapidly and precisely than the previous solenoid valves, and ensure a particularly finely metered fuel supply to the cylinders. This allows the fuel injection to be even more precisely adjusted to the current load and engine speed, and now makes five injections per power stroke possible at a peak pressure of up to 1600 bar.

Electrically controlled intake port shut-off modifies the turbulence of the intake air as it enters the cylinders, optimising the combustion process with the aim of further reducing the fuel consumption and exhaust emissions.

The likewise new electronic control unit manages all the engine functions – from the quick-start glow system and automatic start function to control of the high-pressure pump. The VNT turbocharger (Variable Nozzle Turbine) with electrically adjustable turbine blades, exhaust gas recirculation with a control valve and intake air throttling are regulated as the situation requires on the basis of measured data. In addition the microprocessor exchanges data with the seven-speed automatic transmission and the Electronic Stability Program. 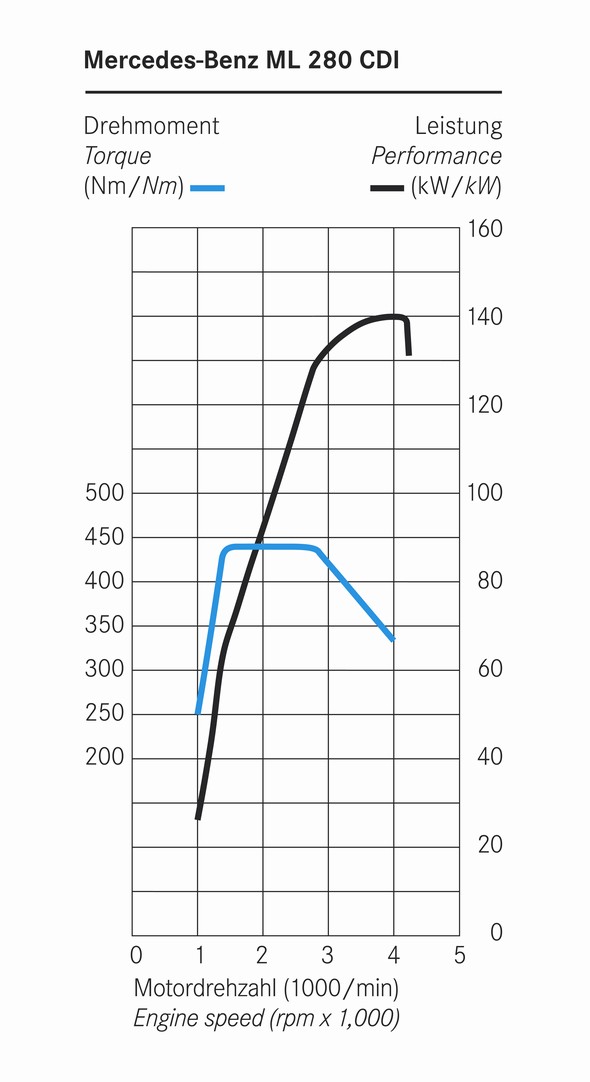 Thanks to this precise engine management system, the nitrogen oxide and particulate emissions of the V6 engine are within the strict limits of the EU4 standard. Two oxidising catalytic converters are responsible for conversion of the carbon monoxide and hydrocarbons: a light-off converter located near the engine and a main converter in an underfloor location.

To reduce soot emissions even further, Mercedes-Benz offers a maintenance-free particulate filter system which is standard equipment for the V6 engine in Germany, Austria, Switzerland and the Netherlands. The filter is purged without the use of additives by selective adjustment of different engine functions. Depending on the operating parameters and filter condition, the variable third-generation common-rail technology allows up to two precisely coordinated post-injections with the aim of specifically increasing the exhaust temperature. This means that the particulates trapped in the filter are burned off in a controlled manner.

World premiere of the new R-Class