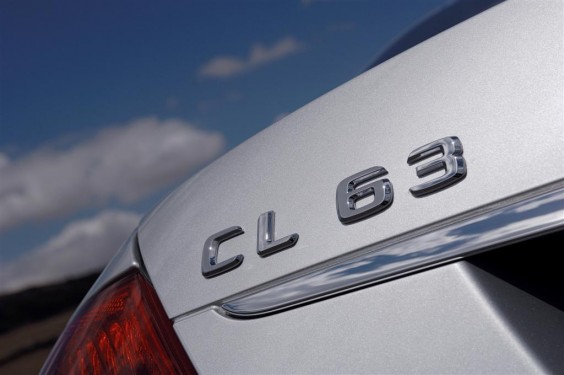 Mercedes-Benz is presenting a broad cross-section of product firsts and technical innovations at this year’s Paris Motor Show. Exclusive high-performance models such as the CL 63 AMG and the Mercedes-Benz SLR McLaren 722 Edition super sports car are celebrating their world premiere here. The latest version of the CL-Class is making its public debut under the slogan “The Virtuoso Luxury Coupe”. Highlights being exhibited on the pre-mium brand’s stand also include the completely redeveloped 4MATIC permanent all-wheel drive system, which is receiving its

first outing in the S-Class. The advent of the S 320 CDI 4MATIC sees Mercedes-Benz offer all-wheel drive in combination with diesel power for the first time in the S Class. Also on show are the standard-specification E-Class models which will be embarking on the remarkable Paris-Beijing endurance rally.
Mercedes-AMG is unveiling the range-topping version of the new luxury coupe, the CL 63 AMG. Under the bonnet is an AMG 6.3-litre V8 engine that was devel-oped independently and delivers a maximum output of 386 kW/525 hp and 630 Ne-wton metres of peak torque for guaranteed scintillating performance. A glance at the high-tech specification of this exceptional two-door coupe emphatically under-lines its exclusive status: in addition to the unmistakable AMG bodystyling and the AMG sports suspension based on Active Body Control, the AMG high-perfor-mance braking system is also fitted as standard. PRE-SAFE, the anticipatory occupant protection system, is included too and may be supplemented by the addition of both the innovative new PRE-SAFE Brake and DISTRONIC PLUS as an option.

The CL 63 AMG represents the highlight of Mercedes-AMG’s 2006 model initia-tive so far, which has encompassed ten brand new high-performance AMG models to date. At the heart of the eight-cylinder flagship model is the AMG 6.3-litre V8 engine.

From its displacement of 6208 cc, the high-revving, naturally aspirated drive unit musters up 386 kW/525 hp at 6800 rpm and generates its peak torque of 630 Ne-wton metres at 5200 rpm. This gives the AMG powerpack a higher power-to-swept-volume and torque ratio than any other naturally aspirated series-produced eight-cylinder engine in the world. The CL 63 AMG is propelled from 0-100 in just 4.6 seconds, with top speed electronically limited to 250 km/h. 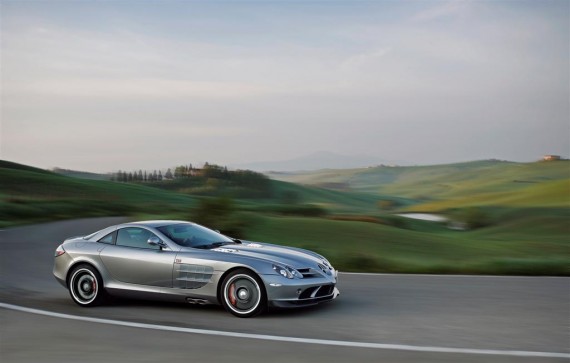 The new Mercedes-Benz SLR McLaren 722 Edition that has been developed in close alliance with the British Formula 1 specialists McLaren is brimming with thoroughbred racing credentials. For Mercedes-Benz, the name was an obvious choice for the new model variant which evokes memories of the unforgettable victory achieved in 1955 by the British motor-racing legend Stirling Moss and his co-pilot Dennis Jenkinson at Mille Miglia  the classic Italian endurance race behind the wheel of a Mercedes Benz 300 SLR with start number 722 (denoting the car’s start time of 7.22 a.m.). The new SLR McLaren 722 Edition super sports car has been developed in response to the desire expressed by the brand’s most discerning customers for even greater sportiness without losing any of the car’s impressive everyday practicality. Under the bonnet is a supercharged 5.5-litre V8 powerplant generating 478 kW/650 hp that endows the high-end sports car with truly devastating performance: the SLR 722 Edition completes the sprint from 0 to 100 km/h in a breathtaking 3.6 seconds, with the speedometer needle passing the 200 km/h mark in a mere 10.2 seconds and 300 km/h in just 28.0 seconds. The acceleration times surpass the figures for the successful SLR – which will continue to be built – as does the top speed of 337 km/h. 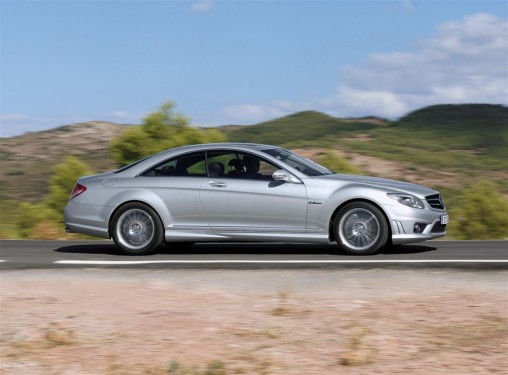 For many decades, the flagship Mercedes Coupes have been synonymous with elegance and exclusivity in the automotive industry. They set the standard in terms of design and equipment, and combine exemplary safety with an out-standing level of comfort and a supremely effortless motoring experience. The new CL-Class is another Mercedes-Benz masterpiece. Just as the luxury coupe points the way forwards for the future with its innovative technology, the design also sets the mould for a new Mercedes style. Powered by the most powerful Mercedes engines to date, the new luxury coupe takes all the challenges of motorway and country driving in its stride. The eight-cylinder unit in the CL 500 generates 285 kW/388 hp and delivers its peak torque of 530 Newton metres from 2800 rpm. The CL 500 takes just 5.4 seconds to reach 100 km/h from standstill. Under the bonnet of the new CL 600 can be found an ultra-sophisticated biturbo V12 that unleashes its power in formidable fashion. It puts a whole 380 kW/517 hp on tap and torque peaks at a phenomenal 830 Newton metres from 1900 rpm. The new CL 600 is catapulted from 0 – 100 km/h in a mere 4.6 seconds. Despite such prodigious performance, the V12 drive unit actually burns 0.4 litres of fuel less per 100 kilometres than the outgoing CL 600. A series of technical innovations are included as standard which will not be found in any other car in the world. The most notable of these are undoubtedly the Active Body Control (ABC) suspension system and the anticipatory occupant protection system PRE-SAFE. For the first time, this multi-award-winning system is being extended in the CL-Class to encom-pass the newly developed PRE SAFE Brake.

The PRE-SAFE Brake works in unison with Brake Assist PLUS (BAS PLUS) and issues a visual and an audible warning to the driver prior to an imminent collision. If the driver applies the brakes, BAS PLUS automatically supplies the brake pressure needed to avert an impact (if still possible). Should the driver fail to react to the warning signals and the risk of a collision becomes acute, the PRE-SAFE Brake triggers automatic partial braking, decelerating the CL Class with around 40 per cent of maximum braking power. This autonomous partial brake applica-tion is a further clear prompt to the driver to take action. If the driver applies the brakes at this point, BAS PLUS will make maximum braking power available. This can potentially avert an accident at the very last possible moment. If this is impossible, the PRE-SAFE Brake lessens the severity of the collision and thus the risk of injury for the occupants. 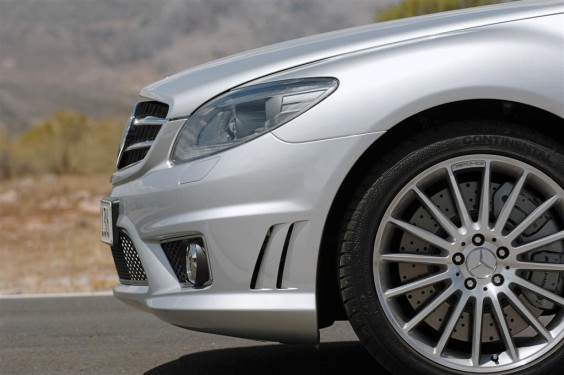 The range-topping CL 600 comes with all the right touches for a first-class ambience, including PASSION EXCLUSIVE leather appointments, seats from the designo range, handpicked poplar wood trim and an Alcantara roof liner with topstitching for a quilted effect. Ventilated dynamic multicontour seats with a massage function, the COMAND APS navigation system with hard drive, the “Logic7” surround-sound system including DVD changer and the KEYLESS-GO access and drive authorisation system are all to be found on the list of standard equipment too. 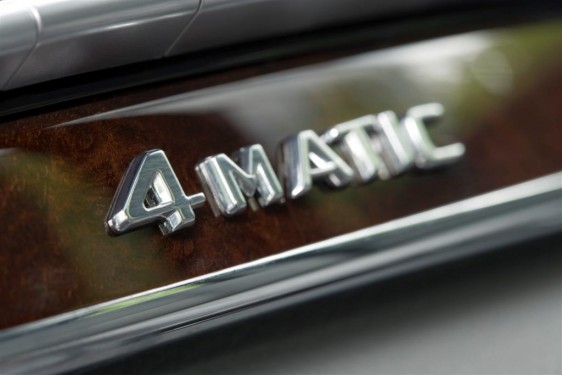 The Mercedes-Benz S-Class is now available with the permanent all-wheel-drive system, 4MATIC. Developed entirely from scratch, the new 4MATIC drive system features a planetary-gear-type centre differential to ensure that drive power is permanently split between the front and rear wheels at a fixed ratio of 45 : 55. The result is effortless and predictable handling over all surfaces. Plus, there is an integral multi-plate clutch for added traction and optimum handling stability when the wheels are just starting to slip. And with the added assistance of the electronic dynamic handling control systems ESP, ASR and 4ETS, the S-Class 4MATIC gives the drivers the peace of mind of a dynamic, comfortable and safer ride, even in the most adverse road conditions. 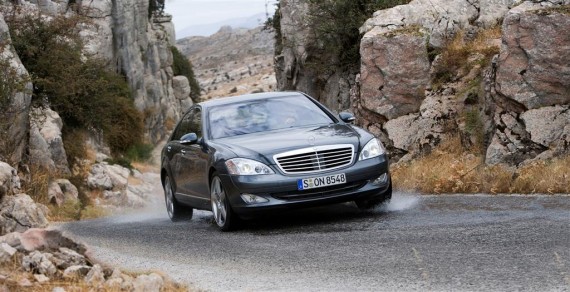 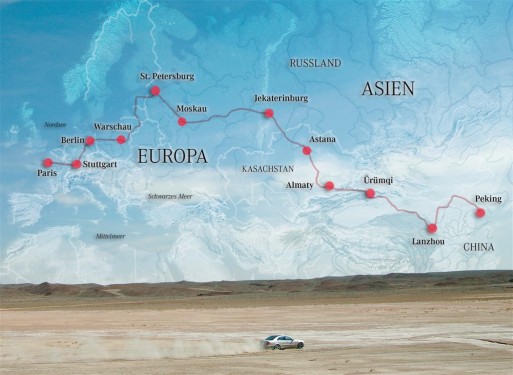 Mercedes-Benz is also presenting the concept for an extraordinary long-distance journey at the Paris Motor Show: the Paris-Beijing car rally will start off from Paris on October 21 and take participants on a journey of some 13,600 kilometres crossing eight national borders before finishing in Beijing. The 33 E-Class cars will cover a total of over 450,000 kilometres in 28 days. That is the equivalent of eleven-and-a-half times around the world. 330 drivers from around 40 different countries will be taking part, including Mercedes customers and enthusiasts as well as journalists, taxi drivers and celebrities. On November 17, the participants are due to reach the final destination of this remarkable marathon journey: the walls of the Forbidden City in the heart of Beijing. The new-generation E-Class will then be unveiled at China’s premier car show, “AutoChina 2006”, which opens in Beijing the next day.

Successful show in the heart of Europe: the Paris Motor Show

The Mondial de l’Automobile, to give the Paris Motor Show its official title, ranks as one of the world’s most illustrious car shows. Held every two years, the show attracted over 1.4 million visitors in 2004, making it one of the most popular events in the car show calendar. From September 30 to October 15, some 500 manufacturers from 30 countries will be exhibiting their very latest products. The world-renowned trade fair centre on the grounds of the “Paris Exhibition” is steeped in tradition, having first opened its doors in 1908. During the Motor Show, the trade fair halls will be open 10 a.m. – 10 p.m. Tuesday to Friday and 10 a.m. – 8 p.m. Saturday to Monday. The entrance fee is 12.00, children under 10 can enter for free. The Mercedes-Benz stand can be found in Hall 1.641. Visitors can find further information on the motor show’s homepage at: http://www.mondial-automobile.com

More than just a matter of form