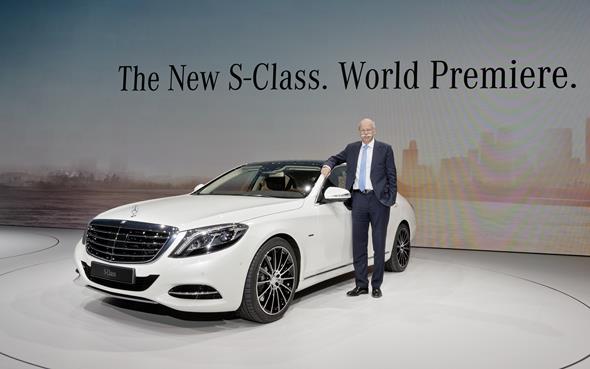 Grand unveiling of the new flagship model from Mercedes-Benz Hamburg.

This evening, the new flagship for luxurious motoring landed in Hamburg on board an Airbus A300-600 DHL cargo plane. Mercedes-Benz had the new S-Class flown in exclusively from its birthplace in Stuttgart for its world premiere at Airbus in Finkenwerder.

At the delivery centre for the Airbus A380, the world’s largest passenger aircraft and a benchmark in travel comfort, Mercedes-Benz unveiled its new luxury saloon in front of around 750 international guests from the worlds of politics, industry and media. 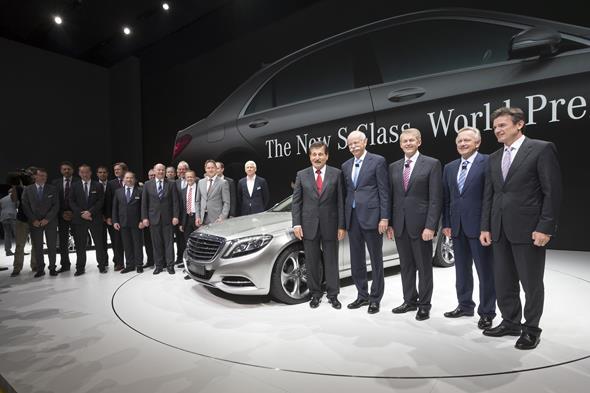 Flanked by the 20 current Mercedes-Benz models and musically accompanied by the Hamburg Symphony Orchestra, the new top-of-the-line model from Stuttgart rolled across the tarmac as part of a spectacular show. In a dazzling display, it took up its position at the head of the Mercedes-Benz family and drove onto the stage with its first passenger, the global superstar Alicia Keys.

Just as the Airbus A380 has set new standards in air travel, the new S-Class is the technological spearhead of automotive development. “Rather than being about safety or aesthetics, power or efficiency, comfort or dynamism, our aspirations were ‘the best or nothing’ in every respect. No other car stands for the Mercedes-Benz brand promise more than the S-Class,” said Dr Dieter Zetsche, CEO of Daimler AG and Head of Mercedes-Benz Cars. 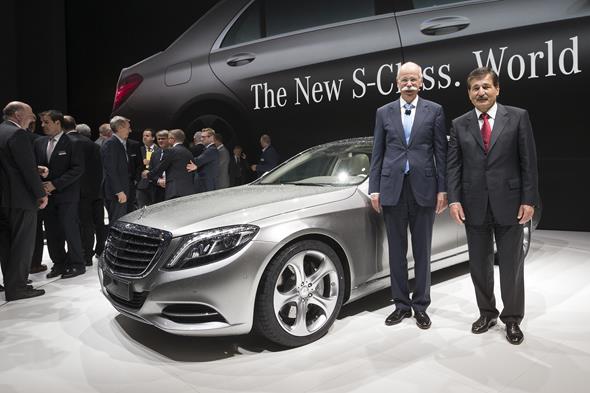 The new S-Class: redefinition of luxurious motoring The new S-Class is the true embodiment of a modern luxury saloon: it is an exclusive first-class mobile office akin to a business jet and also an exquisite centre of well-being at the same time.

While achieving fuel-consumption and emissions values that appeared utopian just a few years ago even for a mid-size car, it raises the standard for automotive safety equipment to a new level. In addition to featuring high-grade materials, the interior boasts numerous world firsts, opening up a completely new dimension in luxury and comfort.

These include the ENERGIZING massage function based on the hot stone principle, active seat ventilation with innovative reversing fans, active and individually adjustable fragrancing as well as the executive rear seat with a revolutionary fully reclined position. 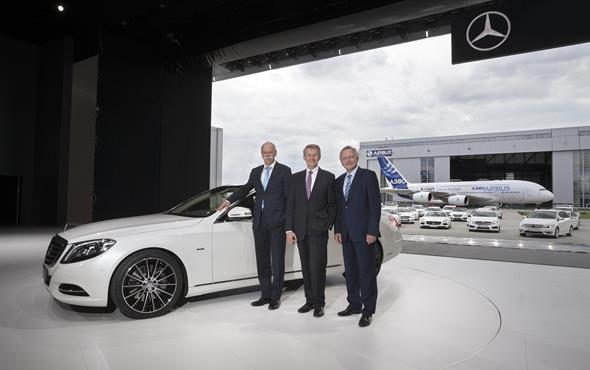 Equally unique is the musical experience. The new S-Class is the first saloon to feature Mercedes-Benz’s front bass system and the new Burmester® high-end 3D surround sound system – for a superlative listening experience.

For the first time, each passenger can individually access the entertainment system from their seat – another world first. The new S-Class also makes its mark in terms of lighting technology. The first car in the world to completely dispense with conventional electric bulbs, it makes exclusive use of energy-saving LED technology both inside and outside.

Equally efficient are the engines, which set new standards in the luxury segment. For example, the S 300 BlueTEC HYBRID consumes just 4.4 litres of diesel per 100 kilometres. And this will soon be followed by the S 500 Plug-In HYBRID, the first S-Class to boast a fuel consumption with a three in front of the decimal point.

A new benchmark in safety is assured by a host of innovative and intelligently interlinked safety and assistance systems. Thanks to their 360-degree all-round vision, these systems provide early detection of potential dangers, warn the driver and sometimes intervene to correct the situation. Mercedes-Benz calls this “Intelligent Drive”. 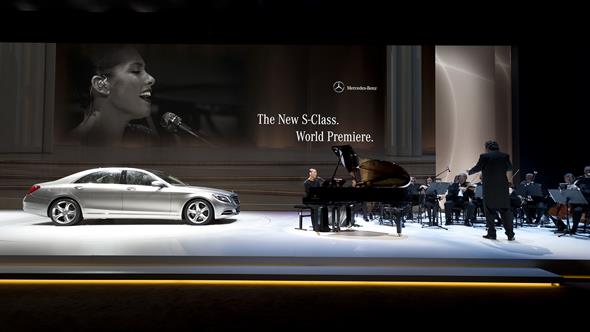 Launch party with global superstars and unique “Ten Star Restaurant” The new S-Class’s uniqueness and leadership aspiration were conveyed to the guests at the world premiere not just through the vehicle itself, but also by a varied range of sensory experiences.

For the dinner, Mercedes-Benz had opened a unique “Ten Star Restaurant”. Five German star-rated chefs specialising in different culinary styles each cooked their own dish, which they also served themselves as a flying menu: Juan Amador from Mannheim (3 stars), Douce Steiner from Sulzburg (2 stars), Tim Raue from Berlin (2 stars), Matthias Schmidt from Frankfurt am Main (2 stars) and Wahabi Nouri from Hamburg (1 star). 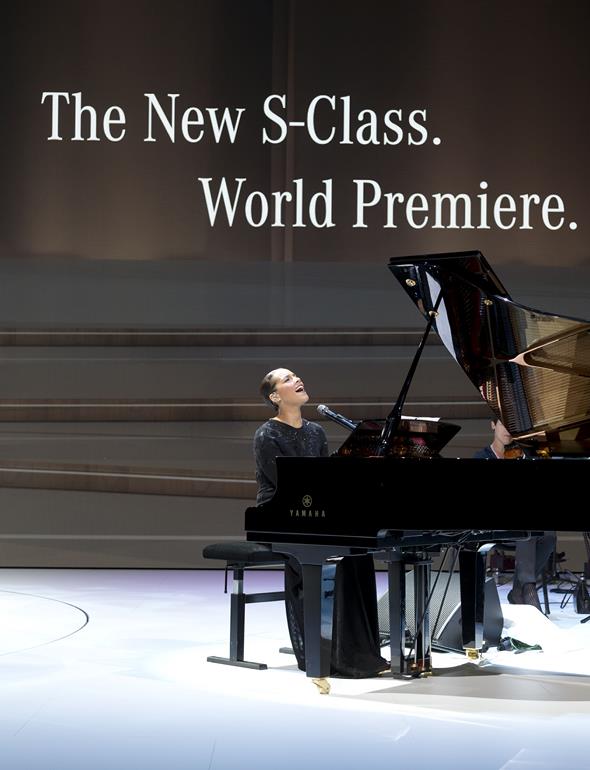 The musical accompaniment was equally excellent and diverse. Global superstar Alicia Keys had come specially to Hamburg just a few days ahead of the start of her European tour. With 19 musicians under conductor Prof. Johannes Schild, the Hamburg Symphony Orchestra played various pieces that had been specially composed for the world premiere of the S-Class by the internationally successful film composer Marius Ruhland. 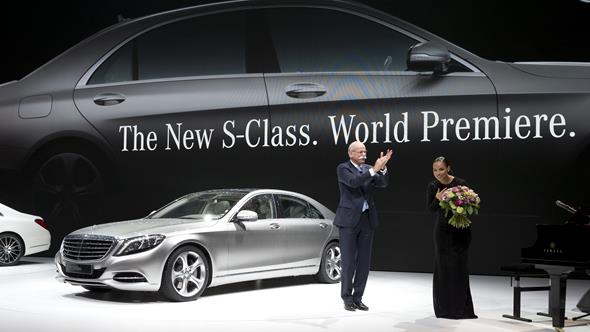 There were also appearances by two internationally acclaimed German musicians: the Berlin-based jazz singer Lisa Bassenge, who won last year’s German Jazz Award in Gold, and Alice Francis from Cologne, who received critical acclaim in 2012 for her debut album. In an original and elegant way, she combines elements of swing, Charleston and jazz from the 1920s with modern hip-hip and an electro-sound. 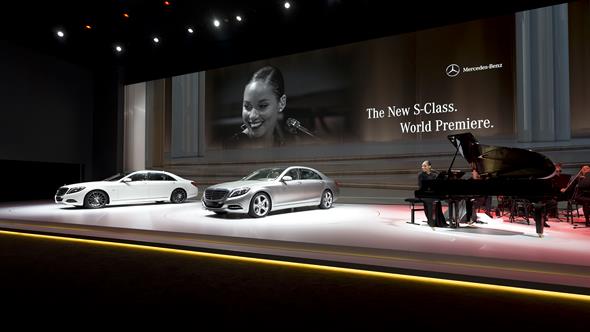 Exclusive presentation at Airbus in Hamburg-Finkenwerder

Meeting of two flagships: The Airbus A380 as the backdrop for the world premiere of the new S-Class 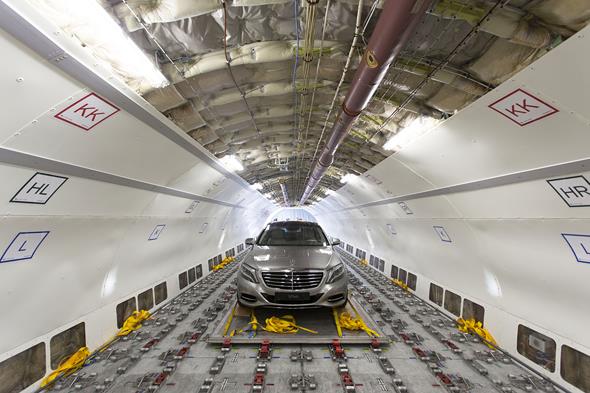 Stuttgart/Hamburg. Yesterday evening, Mercedes-Benz presented the S-Class in a special event. At the Airbus A380 delivery centre in Hamburg-Finkenwerder, the new Mercedes-Benz flagship met up with the world’s largest and most advanced passenger aircraft, the Airbus A380.

As “Germany’s most valuable package”, the star of the event had previously been flown from Stuttgart to Hamburg in an Airbus A300-600 freighter operated by DHL – just in time to celebrate the world premiere with around 750 international guests from politics, industry and the media. 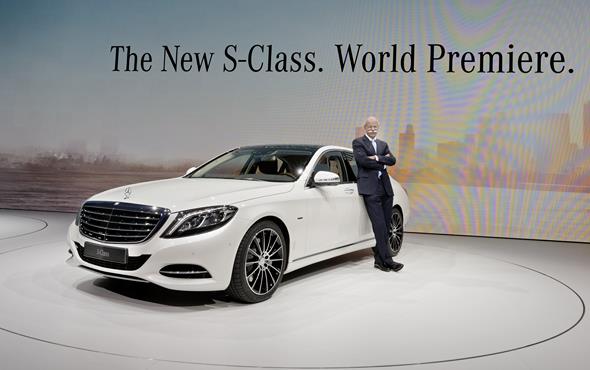 On an LED video screen measuring some 200 square metres, the guests were able to witness the new S-Class being unloaded and driven across the runway to the launch pavilion equipped with multimedia facilities – flanked on each side by current Mercedes models. 15 cameras recorded the event and broadcast the images around the world via an outside broadcast truck. 96 loudspeakers and 20 kW of sound output ensured that every word was heard. 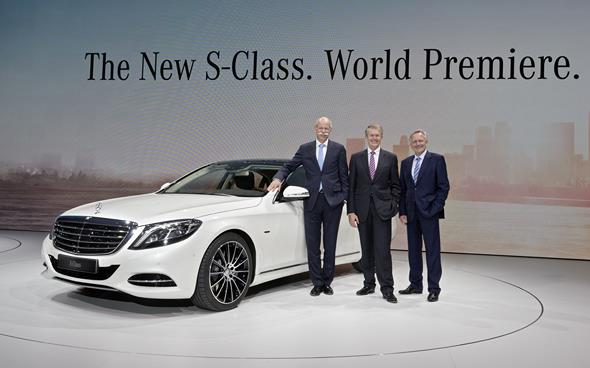 The choice of the A380 Delivery Center as the location for the world premiere was no accident. Like the A380, the new S-Class will set new standards in luxurious travel. “Rather than being about safety or aesthetics, power or efficiency, comfort or dynamism, our aspirations were ‘the best or nothing’ in every respect.

No other car stands for the Mercedes-Benz brand promise more than the S-Class,” said Dr. Dieter Zetsche, Chairman of Daimler AG and CEO of Mercedes-Benz Cars. 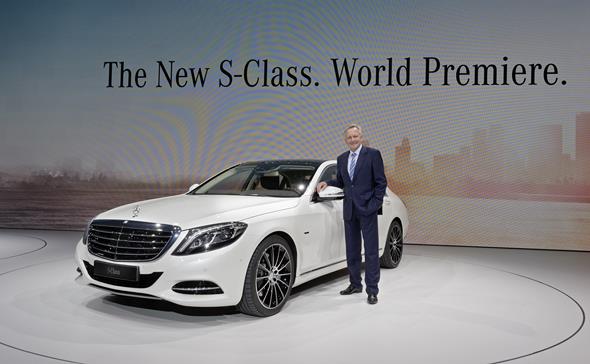 2000 square-metre pavilion for the launch celebration

As a logistical tour de force, Mercedes-Benz had a launch venue constructed where Airbus customers from Europe and the Middle East normally take delivery of their new A380, with a multimedia presentation stage, S-Class showroom, product display, VIP lounge and extensive backstage areas for technical facilities, logistics and catering. This included a kitchen for five German Michelin-star chefs, who opened a unique “ten-star restaurant” on the evening of the premiere to celebrate the S-Class.

Constructing the temporary building took around 14 days, employing up to 100 personnel from various trades each day. A total of 160 semitrailer trucks delivered the necessary materials: more than 500 tonnes of steel, 4000 square metres of wood, 400 spotlights, 96 loudspeakers and an LED video wall measuring 28 metres in width and seven metres in height.

The additional power supply with 3000 KVA of output required 25 kilometres of newly laid cables, 40 distributors and its own generators. Sound quality, for example during the live appearance of the international star Alicia Keys, was not only ensured by the precisely positioned loudspeakers, but also by 26 out­put signal channels and a mixing console with 168 input channels. 400 spot­lights with 130 electric motors in around 1000 metres of traversing rigs shed the best possible light on the S-Class. 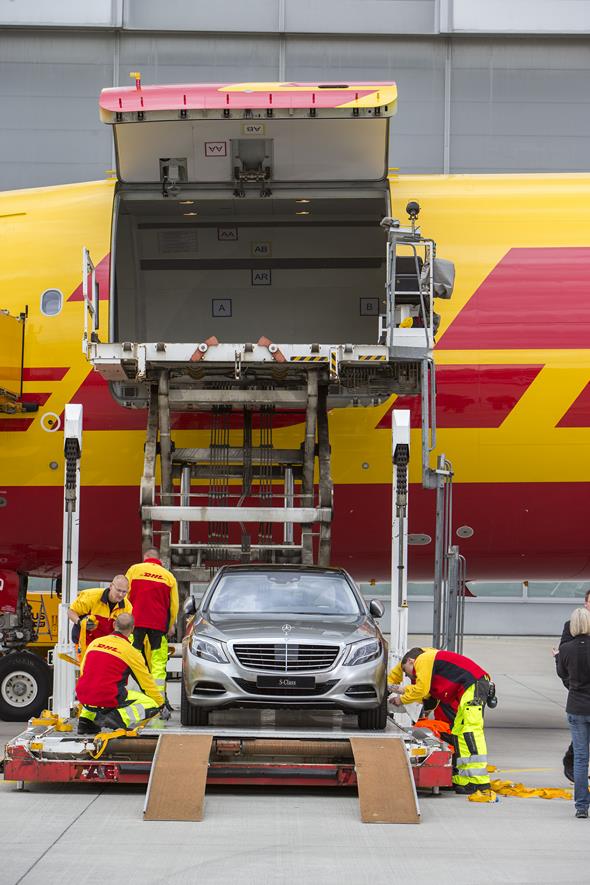 The new S-Class: Luxurious travel at the highest level

The new Mercedes-Benz flagship model is the epitome of a modern luxury saloon. The S-Class is an exclusive first-class office along the lines of a business jet, as well as a haven of relaxation with the ENERGIZING massage function based on the hot-stone principle and individual interior fragrancing. 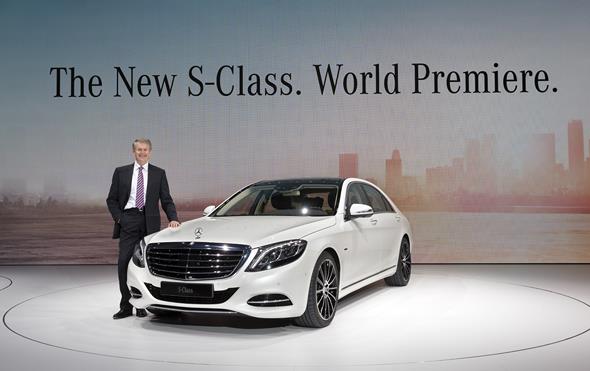 “Our completely newly developed S-Class establishes a never-before-seen dimension in luxury, comfort and efficiency in a saloon, and raises the standard of safety equipment in automobiles to a new level. More than ever, this makes it synonymous with luxury and innovation in automotive engineering,” says Prof. Dr. Thomas Weber, member of the Board of Management of Daimler AG, Group Research & Mercedes-Benz Cars Development. 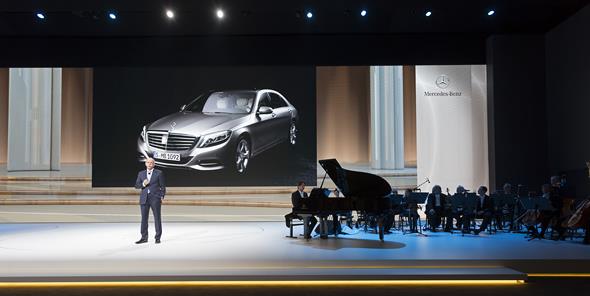 The Mercedes-Benz S-Class – as individual as its customers