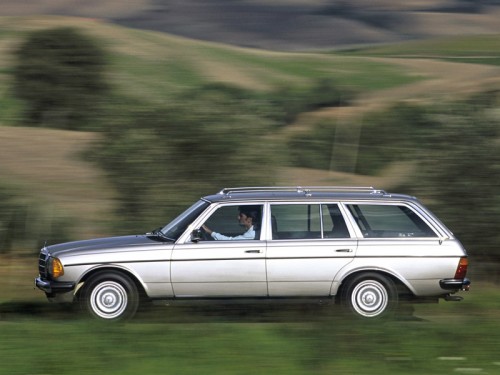 Stuttgart
In January 1976 Mercedes-Benz introduced the 123 series, the new model for the intermediate class. The successor to the successful Stroke Eight (W 114/115) embodied major innovations in vehicle safety and design. The trade press and the public gave it an enthusiastic reception. In the ten years during which it was built the W 123 proved the most successful Mercedes-Benz mid-series model to date between 1976 and 1985 just about 2.7 million vehicles of this series were produced. The perennial favorite has now become a young classic car.

Within this series, Mercedes-Benz for the first time offered a station wagon version built at the Mercedes-Benz factory in Bremen. Launched in 1977, the station wagon (S 123) set standards for the sporty, luxurious five-door car for family and leisure use. Also in 1977 the coupe (C 123) premiered. Featuring a shorter wheelbase and a lower roof compared with the sedan, it was much more dynamic in appearance than the coupe of the preceding series.

A constant factor in the intermediate class the Mercedes-Benz 123 series (1976 to 1986)
A poised and assured representative of its class presented itself to the public for the first time in January 1976: the lights played on the classic lines of the body of the new Mercedes-Benz W 123. The Stuttgart carmakers did not introduce a revolutionary automobile, but rather a thoroughly mature mid-range car combining the latest engineering with tried and tested design features. The new model immediately met with an enthusiastic reception from experts and customers. Today the 123 series as a classic car plays a most important role among the new arrivals to the vintage car scene.

The new model from Stuttgart for the intermediate class stood in the tradition of the W 114/115 series, commonly known as the Stroke Eight. But the design pointed to the future: in technical respect, with numerous innovations in the area of safety; aesthetically as well, with looks suggestive of the new S-Class W 116 and the then current SL models R/C 107. One indication of this is the horizontally arranged headlamps which replaced the previously customary vertical lamps, which had a classic touch.

Greater safety, more comfort and improved serviceability were the demands which the Mercedes-Benz design engineers were called upon to meet when the specifications for the new series were formulated in 1968. The result almost eight years later showed that these stipulations had been implemented in a convincing manner. The high standard of the safety engineering and the mature overall design assured the model the attention of the trade press and buyers. But it was not just the innovations that made the new car a success. The W 123 gained believers with its high standard of workmanship, its practicality, and particularly the broad range of body variants and engines. For instance, from 1977 on a station wagon based on this series and built by Mercedes-Benz itself could be had for the first time.