Numerous models meet EU 5 standard with the potential to meet EU 6
Fuel cell cars to enter series production from 2010
Stuttgart Under the motto Fascination and Responsibility Mercedes-Benz will be showcasing a unique range of new, extremely economical and clean models based on intelligently combined drive technologies at the 2007 International Motor Show in Frankfurt. Our customers can rest assured that their Mercedes will also in future meet the most stringent requirements in terms of safety, comfort and effortless superiority, and that they will do so with exemplary green credentials, explains Dr. Dieter Zetsche, Chairman of the Board of DaimlerChrysler AG. With 19 new models ‑ including seven hybrids and just as many CO2 world champions ‑ as well as the groundbreaking F 700 research car, Mercedes-Benz will be setting out its roadmap for the future in Frankfurt.

The F 700 with its innovative DIESOTTO and hybrid drive consumes just 5.3 litres of petrol per 100 kilometres – equivalent to CO2 emissions of just 127 grams per kilometre. This value equals the fuel consumption of a modern day diesel-powered compact car, and boasts the lowest petrol consumption figures of a large luxury saloon in the history of the motor car, explains Dr. Thomas Weber, Member of the DaimlerChrysler AG Board of Management responsible for Group Research and Mercedes Car Group Development. And in other important vehicle classes, too, Mercedes-Benz is setting the global benchmark for consumption and emissions at the International Motor Show in Frankfurt.

The modular technology concept from Mercedes-Benz includes optimised combustion engines and customised hybrid solutions, which are deployed individually or in combination depending on the vehicle class, application profile and customer requirements.

A prime example comes in the shape of the S 300 BLUETEC HYBRID with its unique combination of BLUETEC and hybrid technology that has given rise to the world’s most efficient, most environment-compatible premium passenger car. As a 4-cylinder with hybrid module it develops a combined system output of 165 kW / 224 hp and a maximum torque of 560 Nm, a figure more reminiscent of a large-displacement V8 petrol unit. The luxury saloon delivers effortless performance yet consumes just 5.4 litres of diesel per 100 kilometres – equivalent to just 142 grams of CO2 per kilometre ‑ 57 grams or around 30 percent less than the current consumption and emissions benchmark in the S‑Class segment.

The S 300 BLUETEC HYBRID has the potential to meet most stringent emissions standards such as EU6 or the BIN5 standard for 50 US states.

BLUETEC and hybrid also for Mercedes SUVs, the E-Class and C-Class 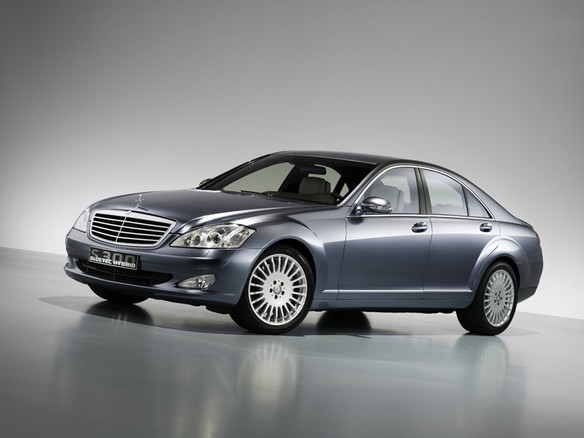 Following the successful U.S. launch of the world’s first BLUETEC passenger car the E 320 BLUETEC, voted the World Green Car of the Year 2007 the technology for the worlds cleanest diesel will now also be rolled out in Europe. At the International Motor Show in Frankfurt, Mercedes-Benz will announce the European market launch in 2007 of the E 300 BLUETEC, the cleanest (EU5) and most economical diesel passenger car in the business limousine segment worldwide. The R, ML and GL 320 BLUETEC will follow in 2008, the world’s first three diesel SUVs that will also meet the stringent U.S. BIN5 emissions standard for 50 U.S. states and have the potential to fulfil EU 6.
ML 450 HYBRID: first German two-mode petrol hybrid SUV on the market 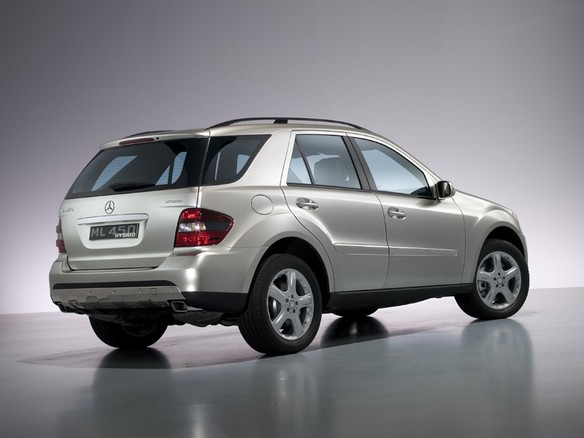 Mercedes-Benz will also be presenting the ML 450 HYBRID, due to be launched on the market in 2009 as the most economical two-mode petrol hybrid SUV worldwide. Its innovative two-mode hybrid system enables electric driving and satisfies the highest comfort demands. With a combined system output of 250 kW/340 hp and a combined maximum torque of 480 Nm, the ML 450 HYBRID consumes just 7.7 litres per 100 kilometres – equivalent to CO2 emissions of 185 g/km.

Product highlights at this years International Motor Show in Frankfurt also include the new C-Class Estate, which combines functionality with stylish design and hallmark Mercedes refinement. Mercedes-Benz will also be exhibiting various C-Class BLUETEC versions — with and without hybrid — which are due to be launched successively.

The Mercedes Car Group will also be presenting future hybrid solutions for smart models at the IAA. The fuel-efficient 3-cylinder petrol smart fortwo mhd, or micro hybrid drive will be available from October 2007. A study of the smart fortwo mhd based on the current CO2 champion among series-production cars, the smart fortwo cdi (88g/km), shows a further clear reduction in CO2 emissions to just 78g/km by use of the micro hybrid drive concepts start/stop function.