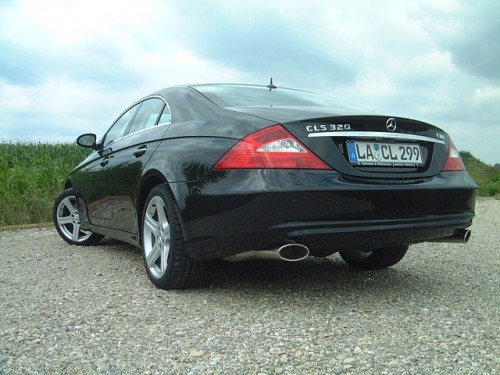 Yesterday I also managed to drive the band new diesel CLS, the 320 CDI. This car uses the new lighter 3.0 V6 common-rail turbodiesel engine that makes 224-horsepower and 510 Nm of torque (376 lb/ft). Its coupled to the 7Gtronic automatic transmission. Let me say this now, I LOVE THE CLS-CLASS! This car is a sex machine.
Exterior wise, this CLS was gorgeous and very passionate. The 18″ 5-spoke rims are my favorite on the normal CLSs and looked simply elegant with a bit of sportiness to them. The black exterior color was also beautiful on the car. Moving inside, we come across the beautiful CLS interior. I loved it. The combination of cream-colored leather and plastics with wood made the interior appear and feel really high quality. And it was. IMO, the CLS has the best interior of any current Mercedes-Benz out there. The seating position feels a little low, but I guess the cars design helps reinforce that feeling. Interior space was generous. Ive heard of complaints about the CLSlack of rear space, but I could fit into the rear seats and enjoy decent leg space: even with the front seats set to my ideal position (a little back, and the back support slanted to the rear). Rear headspace was my problem though. But Im 6.4″how many people are as tall as me?

Preheating was done in a jiffy, and then the V6 diesel came to life. As with the C320 CDI, you couldnt really hear it, even while the motor was still cold. Once the engine was warmed up, what noises one heard were gone. The CLS320 CDI had become ultra-quiet. Vibrations? I felt none, even when the engine was cold. What I did hear and what did bother me a little was everytime you applied pressure to the accelerator pedal, there was a dieselish noise that came from the engine bay. As quickly as it appeared, it disappeared. I just felt that on a car like this, something like that shouldnt happen, especially since I didnt hear this on the C320 CDI, which uses the same engine. It wasnt a loud noise, but it was something you heard.

Unlike the C320 CDI, there was also a slight delay when you stepped on the gas pedal to get the car moving. The CLS320 CDI for a second felt slow and uneager, but then it accelerated with vicious eagerness: and I wasnt even stepping on the pedal that brutally. I suspect it was a turbo-lag. Odd since in the C320 CDI, the motor responded instantly. I would later find out that this disappeared to a degree once the engine was properly warmed up. It would still be audible, but not as loud.

With the engine now at its operating temperature, it was time to see what the CLS320 CDI could do. With 376 lb/ft of torque, I knew this thing had power to shove me back deep into the cream-colored leather seats. When I reached the roads I like to testdrive MBs on, I let the CLS320 CDI slow down to around 20 km/h, then hammered it. It was no CL600, but the rear wheels began to spin like crazy (which you could feel), and I was the ESP lamp blink indicating that the computers were trying to correct the wheel spin. All this happened in less than 2 seconds and then the CLS320 CDI took off with ferocious power that pushed me deep into the seats. The speedometer was indicating a fluid rapid move from speed to speed. MB claims a 7 second 0-62 mph sprint for the CLS320 CDI, it felt like that and a bit faster. It probably was faster since MB is so conservative with their 0-60 times. Either way, this thing was fun to hammer. All that torque the engine had in reserve was perfect for experiencing quick acceleration. It gets even better: midrange power was even more brutal. With the car at speed, hammering the pedal sent those 376 lb/ft into action and they first of all shoved me back again (my poor back!) and made the CLS accelerate even more madly. Pitted against the CLS350, this thing would leave it behind no questions asked. At this point, the engine didnt sound like a diesel at all: V8 muscle car is the sound I heard.

In order to enjoy such performance qualities, the car needed a good steering and suspension system. Both were well setup. The steering feel wasnt very heavy, yet it was agile in responding to driver input. I also got the impression that this thing had the Parameterlenkung since the feel of the steering wheel changed according to different speeds. In short, the steering system inspired confidence. The suspension as well as nice setup. It was soft because the CLS is still a luxury car, but it was well suited for sporty driving in twistys, as long as you didnt take it to the extreme level. And its much sportier than the E-Class by far, I should know, I have one in the family. The CLS seats were comfortable to a high degree and offered good side support. Better than the E-Class. I still dont see it or the E-Class as sports sedans however, but the CLS is definitely sportier than the E-Class. It feels more sporty, and has less body roll as well. 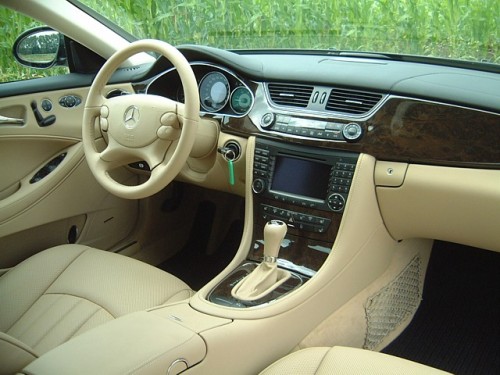 Another thing I noticed was that when you cruised around lazily, the diesel engine was ultra-quiet. In fact, it sounded even quieter than our gasoline E320! Again however, when you stepped a little on the accelerator, there were some dieselish noises that came for a second or two, then disappeared as the car gained speed. Nothing annoying really, but it wasnt audible on the C320 CDI: which costs less than the CLS.

The 7Gtronic transmission wasnt even an issue. I didnt bother selecting my own gears, it was that good. If theres anything about the 7Gtronic you should know about, its to leave it to manage the gears for your Mercedes. Shifts could only be detected by the flicker of the RPM gauge. A great piece of engineering this transmission: and one reason why the CLS320 CDI accelerated like crazy. 7 forward gears are perfect for exploiting that narrow torque band of diesel engines.

Driving a CLS is always an experience. You are the star on the road as people literally stop and stare. I noticed car drivers behind me entranced by the gorgeous looks of this car. People on the street stopped and stared, especially when I took the CLS through town square at a really slow paceenjoying the attention I got. Damn I love this car. :sun:] And I am not even an attention-seeker, but it was fun while it lasted. Seriously, I would describe this car as a sex machine. Its really fun to drive and just feels so good. Just sitting in it, having view of that gorgeous interior and driving it makes for a whole lot of fun. Dont forget the people staring at the car as it drives by. Its a feeling I cant really describe. You have to drive it to believe and experience it. As for me, I am hoping there will be more CLSs to drive since these cars are addicting.

I also took the car out on the B12 road, which is a state road and allows a max speed of 62 mph in straight lines for the most part. All I wanted to do was test the CLS acceleration once again and just drive 100 km/h for longer periods. I have to say, Damn!. Its a fine cruiser, and the diesel engine cannot be heard when youre driving at a relaxed 62 mph or higher on the appropriate roads. In fact, the only time I heard the diesel was when I applied some pressure to the gas pedal. A dieselish sound would appear, but it was completely gone after around 2 seconds. Im still a little baffled because the C320 CDI didnt have this.

Overall, I came away very impressed with the CLS320 CDI. It felt a little heavier than the CLS350, but that didnt really seem to affect its handling abilities, which were more than capable of coping with the driving styles of adventurous drivers. In the end however, the CLS told me that it was intended to be driven like most Mercedes: relaxed and in an elegant and stately manor. If youre the kind of person who wants attention or loves making a grand entrance, the CLS is the Mercedes for you. Theres only one problem with the CLS: its not a family car IMHO. If you have a family, stick with the E-Class. If youre a show-off, CLS all the way.