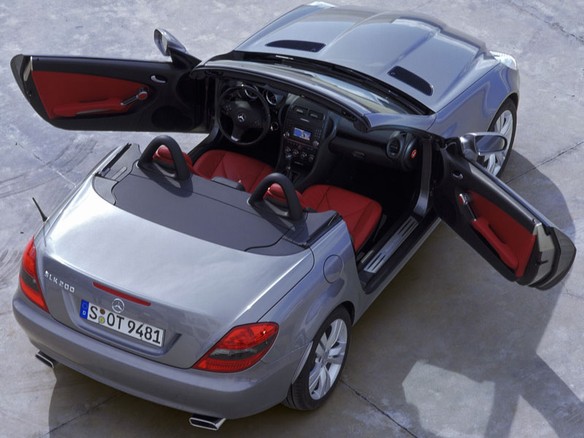 Stuttgart The Mercedes-Benz SLK-Class Roadsters have long captured the hearts of sports car enthusiasts. Incorporating around 650 newly developed parts, the SLK models of 2008 are even more dynamic and now offer an even more emotionally charged driving experience. Key visual enhancements include new-look front and rear sections as well as a meticulously modified interior with a new instrument cluster and three-spoke sports steering wheel. A fast-running V6 sports engine developing 224 kW/305 hp and an optionally available direct-steer system truly bring the bold, dynamic character of the two-seater SLK 350 to the fore. Furthermore, all of the engines in the line-up are now far more economical on fuel and, therefore, emit even less CO2, despite a substantial increase in output in many cases. The new-generation SLK models will be available from April 2008, costing between 36,503.25 and 69,049.75 incl. VAT. 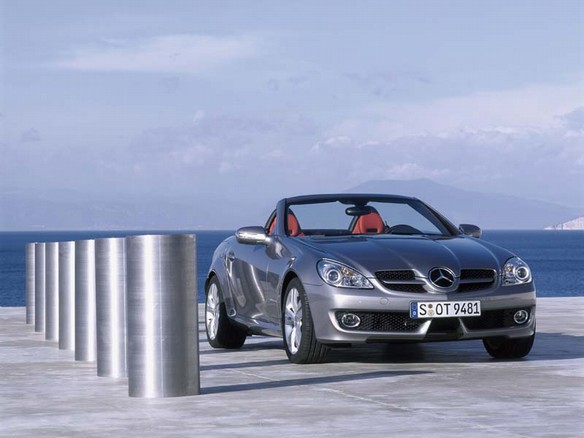 Since their first appearance in 1996, the compact SLK Roadsters have come to symbolise Mercedes-Benz’ dynamic brand image. Already a familiar sight on our roads, the second-generation two-seater is to be further enhanced with the implementation of a raft of measures in 2008, the aim being to further emphasise the car’s sporty character and continue the SLK-Class success story by introducing new, dynamic, powerful elements. Some 310,000 first-generation roadster models were sold between 1996 and 2004. And around 185,000 customers some 60,000 of them in Germanyalone have already purchased the second-generation model since its launch in March 2004 (figures at year-end 2007). This means that total unit sales of the SLK Roadster are now approaching the half-million mark. 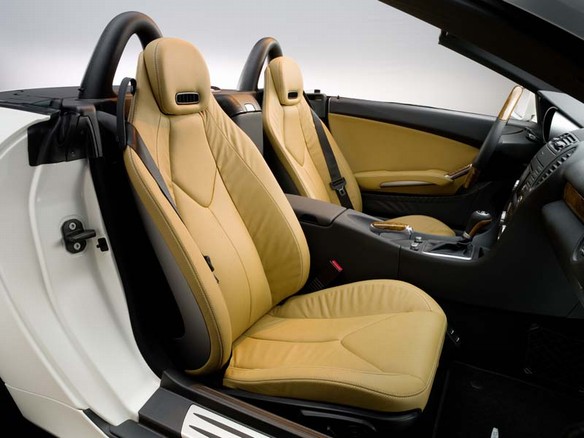 The new-generation SLK displays new sporty highlights, further enhancing the appeal of the successful two-seater with the trendsetting vario-roof that transforms the car from a roadster into a weatherproof coupe in a matter of seconds.

Distinctive character: even more pronounced arrow shape at the front end and a diffuser-style rear end 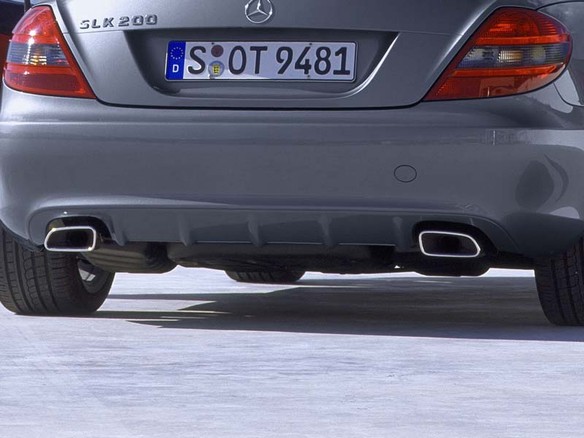 The designers have given the already dynamic-looking two-seater cult model an even sportier appearance. Eye-catching features include the new-look front bumper with a modified air-dam arrangement and a more pronounced arrow shape. Plus the area around the Mercedes star has been restyled to render it even more succinct. In addition, the designers have modified the rear end by introducing a diffuser-style lower section that makes the Roadster appear more powerful when viewed from behind an effect that is enhanced considerably by the trapezoidal exhaust tailpipes and the AMG-inspired darkened tail lights. The now larger exterior mirrors feature LED indicators with a pronounced arrow shape, while the range of light-alloy wheels is also almost entirely new.
High-quality cockpit and new three-spoke sports steering wheel

Many of the interior details have also been redesigned and upgraded following a careful process of material selection. Particular importance was attached to optimising the interior so as to make it even more driver-oriented. Centrepieces include a new three-spoke sports steering wheel with multifunction buttons and a new instrument cluster with captivating dial surrounds. 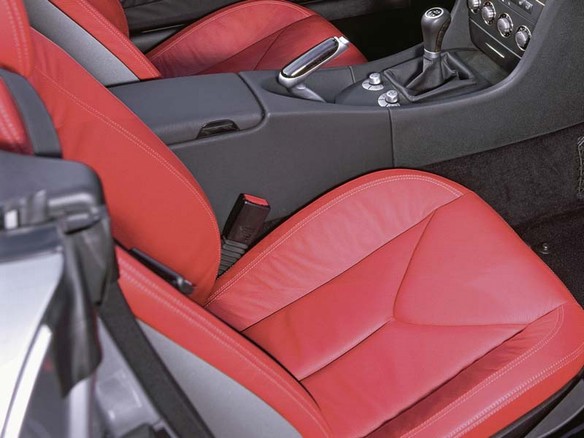 Mercedes-Benz is installing the new NTG 2.5 audio and telematics generation in the SLK for the first time. It is easier to operate and offers an even wider range of useful functions. Standard features integrated in every radio include a hands-free system with Bluetooth technology and a new media interface in the glove compartment, allowing the full integration of mobile audio devices such as an iPod, which can then be operated via the audio system’s user interface. Together with the new telematics generation, Mercedes-Benz is also offering the LINGUATRONIC voice-operated control system as an optional extra in the SLK-Class for the first time.
Voluminous surround sound even when the roof is open

Passengers can enjoy a unique listening experience, regardless of whether the vario-roof is open or closed, thanks to the optionally available harman kardon Logic7 sound system. Rich and voluminous surround sound makes for crystal-clear listening pleasure, the like of which has never before been associated with a roadster.
Fast-running sports engine: higher output and much lower fuel consumption

The sporty credentials of the 2008 SLK generation are further enhanced by three modified powerplants that consume less fuel and, therefore, emit less CO2. The four-cylinder powerplant in the SLK 200 Kompressor and the six-cylinder sports engine in the SLK 350 both offer substantially more power and torque. Only the SLK 55 AMG retains its familiar engine  an eight-cylinder unit that has lost none of its mesmerising performance capability and remains a unique selling point in the SLK segment. 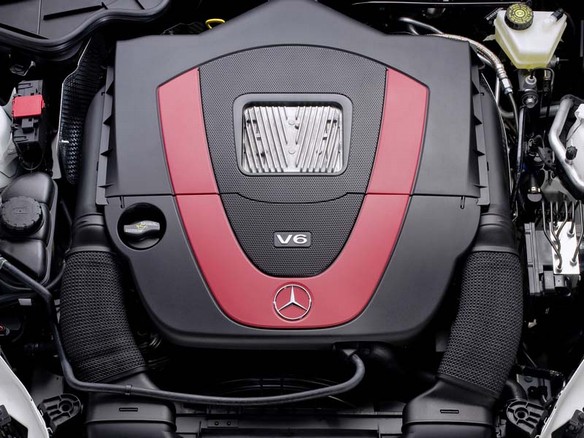 The Mercedes-Benz engineers paid special attention to the fast-running V6 sports engine that makes its debut in the new-generation SLK, totally altering the six-cylinder unit’s character by making sweeping changes to the mechanical setup. Although the displacement remains the same at 3498 cc, the engine now develops 224 kW/305 hp at 6500 rpm  some 24 kW (33 hp) more than its predecessor. The peak torque has also been boosted, by 10 Nm, and now stands at 360 Nm when the engine is running at 4900 rpm.
This result was achieved by raising the engine speed limit to 6800 rpm; it can even be increased to 7200 rpm for a brief period  oil temperature and other engine parameters permitting. Other changes introduced include a higher compression ratio, a new intake manifold and an extensively modified valve train.

Further aspects which add to the emotionally charged appeal of the new engine include deliberately powerful sports-engine acoustics with a strikingly emotive sound design when decelerating. In combination with the 7G‑TRONIC automatic transmission, the engine management system also blips the throttle automatically during downshifts. As well as producing an extremely sporty sound, this throttle-blipping function reduces load alteration effects.

The engine line-up for the second generation of the successful SLK-Class is being augmented by three further variants: 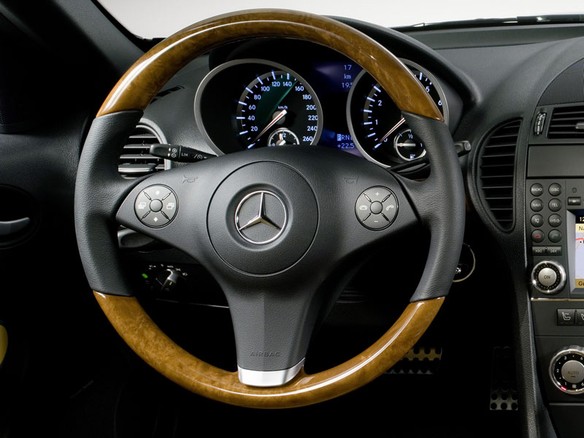 A newly developed direct steering system with variable steering assistance, available as an optional extra (standard for the SLK 55 AMG), further highlights the qualities of the sporty chassis, combining agility and manoeuvrability when driving on twisting rural roads with steering comfort when parking and assured steering characteristics when travelling at high speed.

The direct- steer system is based on the previously installed speed-sensitive power steering system and operates by purely mechanical means, meaning that there is no need for elaborate actuators and complex sensors. At its heart is a new rack with slick gearing, which ensures that the steering gear ratio changes in tune with the steering angle. The ratio is indirect when the steering is in or around the central position so as to ensure excellent straight-line stability and, therefore, a high degree of assuredness when travelling at high speed. At a steering angle of just 5 degrees, the ratio starts to increase extremely rapidly and the steering feels much more direct. As a result, the number of steering wheel revolutions from lock to lock is reduced by around 25 percent if the new direct steering is fitted. This means that, even in city traffic, relatively little steering wheel movement is required to correct the car’s path. Fast sequences of bends on rural roads can be negotiated almost intuitively with relatively small steering movements with assurance, precision and a healthy dose of driving enjoyment.
Visually enhanced SLK 55 AMG

On a technical level, the SLK 55 AMG remains almost unchanged. The only differences are a few visual enhancements. The front end of the AMG model now features a new apron with a black-painted cross strut and side air outlets as well as darkened headlamps. 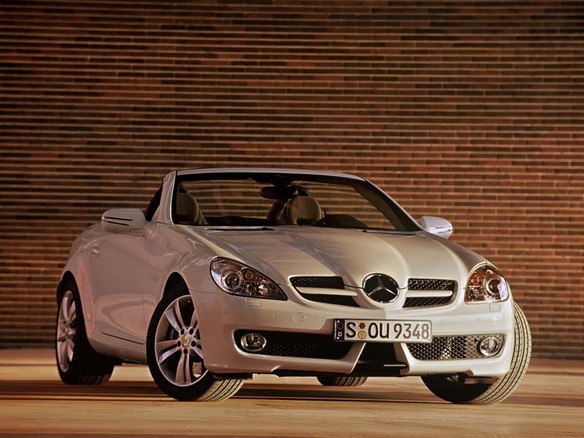 As trendsetters and technology leaders, the SLK-Class Roadsters have long enjoyed the image of a modern cult car. Even after the extensive modifications, the familiar outstanding qualities remain, for example, the vario-roof that transforms the roadster into a coupe in 22 seconds, not to mention the extensive standard-equipment package, including head/thorax sidebags, adaptive front airbags and two-stage belt-force limiters. Plus the roadster also comes with the option of the unique AIRSCARF neck-level heating system, which allows open-top driving pleasure all year round, even in winter.

Mercedes is making the CLS even more irresistible