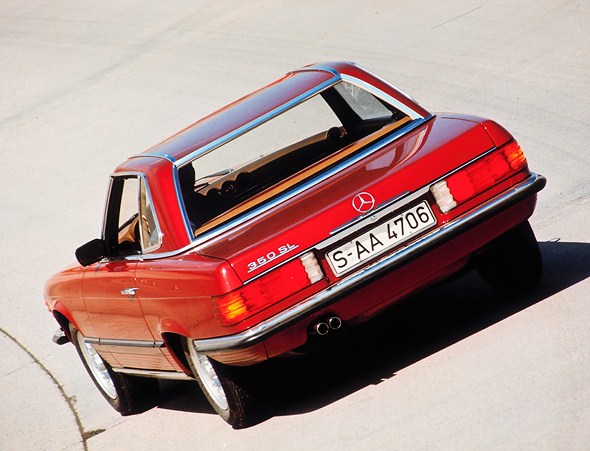 Stuttgart – In the 1960s, the question of environmental friendliness began to acquire a growing importance in the automotive industry. In the USA in particular, legislation was enacted concerning environmental protection, for example, in respect of exhaust emission levels.

Compliance with these was an immense challenge for car manufacturers. Each car that was launched in those years reflected the current situation – in particular the Mercedes-Benz SL, model series R 107, which celebrated its debut in 1971. Because the USA was (and is) a highly important market for every SL series.

The brand with the three-pointed star took this into account from the very start. In the spring of 1971, the Mercedes-Benz 350 SL was presented, and with a slight time lag the version designed for the US followed.

It differed from the normal version in one significant aspect: it had a different engine, because from the outset the version of the new SL intended for export to North America was not delivered with the regular 3.5-litre V8 power unit, but with a 4.5-litre powerplant instead, and was initially offered under the model designation 350 SL 4.5 in the US.

Apart from compliance with the emission control legislation in force, another reason was the low lead content of the petrol in the USA in those days, which resulted in low knock resistance, with octane ratings of 91 (RON) and 81 (MON). The engines destined for the US market had a compression rate of only 1 : 8. In order to reach somewhat acceptable performance levels, it was thus imperative to use the larger-displacement 4.5-litre engine.

Mercedes-Benz initially did not provide any output figures for these vehicles. However, comparative measurements have shown that the engines had an output lower than the 200 hp (147 kW) of the 3.5-litre engines built for the European market. 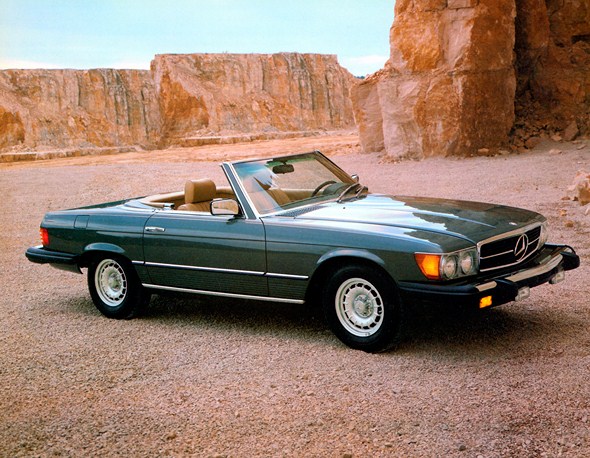 A 350 SL with automatic transmission could accelerate from a standstill to 160 kph in 26 seconds, attaining a top speed of 211.8 kph, whereas the 350 SL 4.5 required 29.5 for the 0 to 160 kph sprint and reached a maximum speed of 198.4 kph. Unlike later versions, for these two measurements the vehicles had identical transmission ratios.

From model year 1974 and due to increasingly restrictive exhaust gas regulations in California, the US market was supplied with two different versions: a “California version” as the cars for the sunshine state are called, and a “States version” for the remaining States of the US. 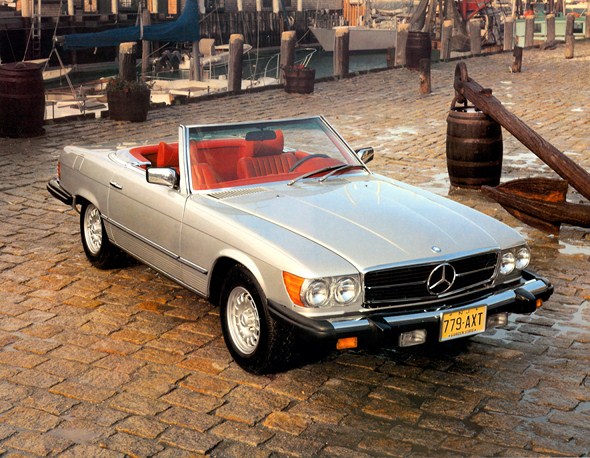 The California cars featured additional exhaust gas recirculation and an expanded fuel evaporation unit with an activated charcoal filter. The engine output of the “States version” was 190 SAE hp (140 kW), while the California version sank to 180 SAE hp (132 kW). From 1975 onwards, the California version became mandatory for all the states. And from 1976, only lead-free petrol was available throughout the United States. 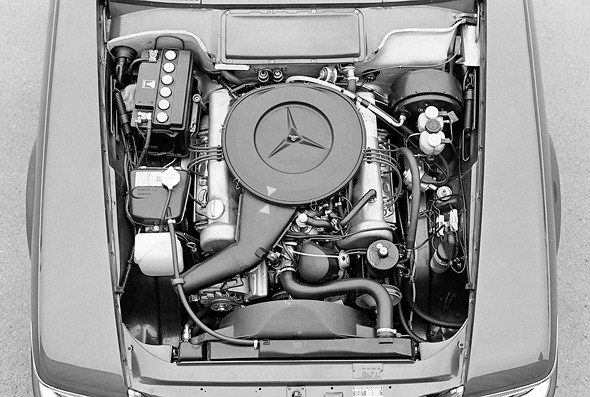 Stricter crash regulations were another factor that had powerful effects. The requirement that a collision at 8 kph should not damage the bodywork at all led to the US versions featuring the prominent bumpers typical for that time; they lengthened the SL by 250 millimetres and also increased its weight.

From model year 1980 on, the engines lost another 20 SAE hp (15 kW) due to increasingly stringent exhaust level regulations.

In combination with the longer drive axle transmission ratio (from 1 : 3.27 to 1 : 2.65) because of the increased strictness of the fleet consumption regulations, the performance figures sank even further. The top speed of the 450 SL was 179.2 kph and it took 35 seconds to accelerate from 0 to 160 kph. 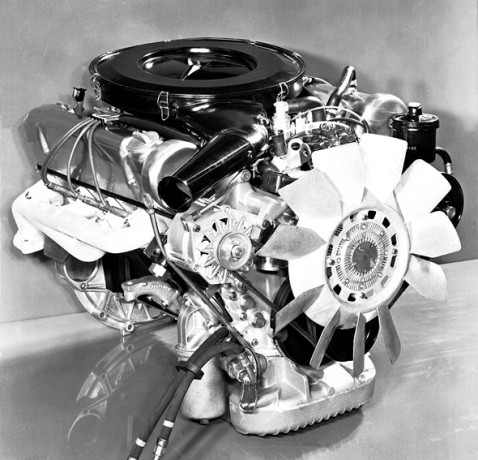 The increasingly stringent fleet consumption regulations led to a substantial change between model year 1981 and model year 1985. The 380 SL replaced the former 450 SL. US market customers had to be content with an output of 155 SAE hp (114 kW) and the modest torque of 267 newton metres.

Top speed was 176 kph and a time of 29.5 seconds was listed for the acceleration from 0 to 160 kph. These figures, determined in 1984, are comparable to those achieved four years previously by the 4.5-litre engine.

Exclusive availability of the 380 SL to the US market led to the notable figure of 44,333 vehicles exported to the USA, representing a share of 83.33 per cent of the total. For those interested in the more technical aspects: from the outset, the 380 SL featured the long-stroke version of the M 116, which was extended to all other markets with the so-called energy-saving concept from the autumn of 1981.

The Board showed that it had a heart for US customers when, on the occasion of a decision-making drive for the model year 1985/1986, it chose a model unknown in these latitudes: the 560 SL for the US was born, and the conditions in that market were the exclusive reason.

What had happened? Next to the 380 SL for the US market, test engineers presented, among others, this version with a 5.6-litre engine. The Board made a clear decision in favour of the 5.6 l version, a decision that was made a little easier by the quality of the petrol in the US, which had meanwhile improved significantly.

A RON value of 96 and a MON of 86 represented a marked improvement over the fuel quality of ten years previously. They allowed the compression ratio to be raised to 1 : 9 and the combustion efficiency of the engine to be improved.

Specialist magazine “Road & Track” measured a top speed of 208 kph and acceleration from 0 to 160 kph in 19.6 seconds, values that would not make a European jump for joy, but for a US-American the car represented a significant step forward which was clearly appreciated. Of 49,340 vehicles built, 46,263 were sold in the USA alone.

The next step towards even more environmentally-compatible cars was taken from the mid-1980s onwards with the introduction of the exhaust catalytic converter. The Mercedes-Benz SL of the R 107 series was also equipped with one; then, starting with the 1985 facelift, the 300 SL, 420 SL and 500 SL, available for the other markets, were progressively introduced as versions equipped with a regulated catalytic converter.