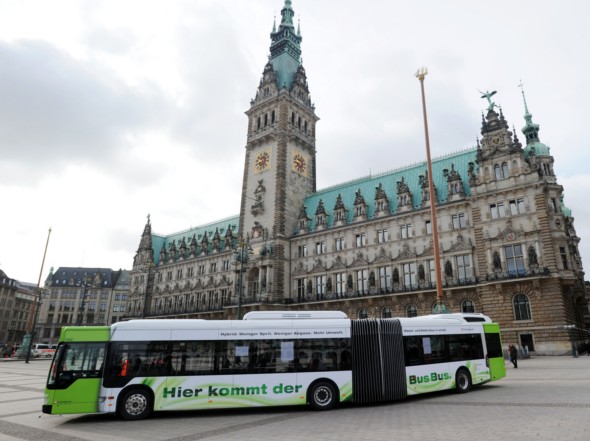 Stuttgart/Hamburg – It arrives with hardly a sound and then drives away from the bus stop without the usual loud engine noise one expects to hear from a bus. It then continues in this manner at several more stops along its route. Passengers in downtown Hamburg who report such an experience in the future will obviously be talking about the Mercedes-Benz Citaro G BlueTec Hybrid, two units of which have been acquired for a field test by the Hamburger Hochbahn public transport company.

The two articulated hybrid buses were handed over today to Hamburger Hochbahn Chairman Günther Elste by Michael Göpfarth from EvoBus GmbH, in the presence of parliamentary state secretary Enak Ferlemann from the German Transport Ministry, as well as Hamburg’s Senator for Economics, Axel Gedaschko. “We are very happy that our longstanding customer will be using our articulated hybrid buses and their cutting edge technology in Hamburg,” said Göpfarth.

The Citaro G BlueTec Hybrid is the only hybrid bus in existence today that can travel for stretches solely on electric power without using its diesel engine. The new Mercedes-Benz BlueTec hybrid bus is driven by electric wheel hub motors that obtain their electricity from one of the world’s largest lithium-ion batteries ever to be used for a mobile application. The electricity is generated through braking during downhill driving, for example. If necessary, it can also be produced by a generator driven by a diesel engine that is relatively small for the Citaro’s vehicle class. Experts refer to such a setup as a series hybrid drive.

This technologically sophisticated diesel-electric hybrid concept has been installed in the proven articulated bus model of the world’s most successful urban bus family, the Mercedes-Benz Citaro series. The hybrid Citaro looks exactly like a conventional diesel bus from the outside, except for its high roof, which houses the battery.

Passengers will also notice no differences in the interior, which can accommodate around 125 people and whose 46 seats are arranged in the same manner as those in all other buses operated by Hamburger Hochbahn. The difference is in the driving: The bus is practically silent and there are no sudden jerks. Nevertheless, the four electric motors in the 18-meter bus accelerate it quite rapidly. These motors, which are integrated directly into the wheel hubs on the center and rear axles, have a combined output of 320 kW. 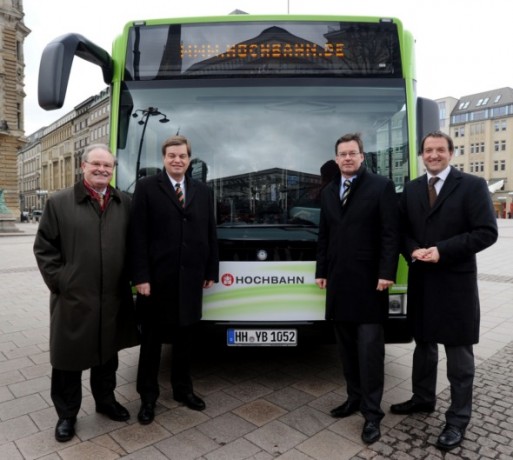 The motors also go into action during braking, serving as generators that convert braking energy into the electricity used to charge the battery. When the latter requires additional power, the diesel engine automatically engages to provide it. This combustion engine is only half as large as that used in a normal diesel bus. Instead of 1,000 kg, it weighs only 450 kg. It also has only 4.8 liters displacement as opposed to 12, and its output of 160 kW is around one-third lower.

The energy storage unit in the new Mercedes-Benz Citaro G BlueTec Hybrid is a lithium-ion battery whose power rating exceeds anything ever seen before for this technology. The battery system boasts a maximum output of 240 kW and, with a weight of less than 350 kg, it’s also relatively light. Its biggest advantages over conventional battery systems are its higher energy density, higher storage capacity, and lower dead weight. By comparison, test buses equipped with hybrid drives 30 years ago in Stuttgart carried rechargeable lead batteries weighing 3,000 kg on board.

Lithium-ion batteries became commercially available for the first time in 1991. Today they are used with practically everything that requires a lot of energy but low battery weight – e.g. cell phones, digital cameras, camcorders, and notebook computers.

Their use in large vehicles like passenger cars, trucks, and buses is relatively new, however. Daimler already has experience with lithium-ion batteries in buses: More than 500 of a total of 2,500 hybrid buses from Orion, a Daimler AG brand in the U.S. and the world market leader for hybrid buses, are equipped with lithium-ion batteries produced by the same company that built the batteries for the new Mercedes-Benz Citaro G BlueTec Hybrid. These batteries have an output roughly equivalent to that of around 9,000 large laptop batteries.

Concept on the way to series production

The two Citaro G BlueTec Hybrid buses in Hamburg are the first such vehicles to be sold and also used within the framework of a customer field test in Germany. This year, Daimler will test around 30 Citaro G BlueTec Hybrid buses in selected model regions. The buses will demonstrate their suitability for everyday use by operating in regions with different topographies and speed profiles.

Back in March 2009, 250 experts from various European transit companies had the opportunity to experience the Mercedes-Benz Citaro G BlueTec Hybrid articulated bus in action for the first time. The new bus was also completely put through its paces in internal test operations that included several weeks of successful trials at the Arctic Circle under the harshest conditions imaginable.

Small Lights with a Big Future