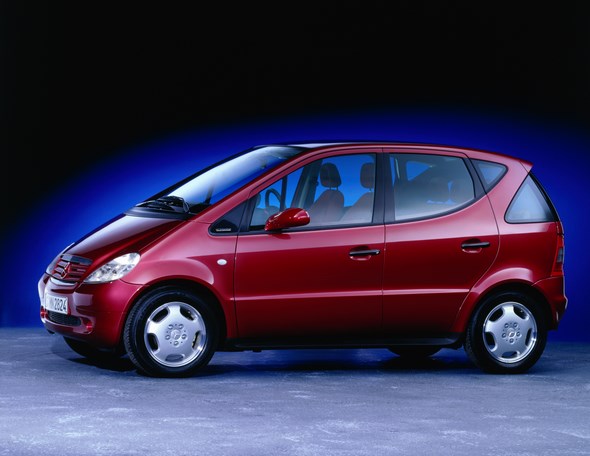 Who dares wins: looking back, that could have been the guiding principle for the development and market launch of the Mercedes-Benz A-Class. In March 1997, the brand unveiled its new pioneering model to a global public at the Geneva Motor Show.

Bearing the internal designation of the W 168 model series, the newcomer attracted a great deal of attention – and, a short time later, a certain amount of criticism too after an A-Class tipped over in the so-called “moose test” conducted by motoring journalists from Sweden.

Mercedes-Benz was quick to react, equipping the A-Class with a modified chassis and fitting the Electronic Stability Program ESP® as standard. In the process, the brand took compact car safety to even greater heights.

And this high standard would in future come to shape the entire industry. So began the A-Class success story that still continues today, with the third generation now on the market.

The A-Class has in the meantime spawned a youthful model family all of its own and plays its part in the strong sales performance of the Mercedes-Benz brand. 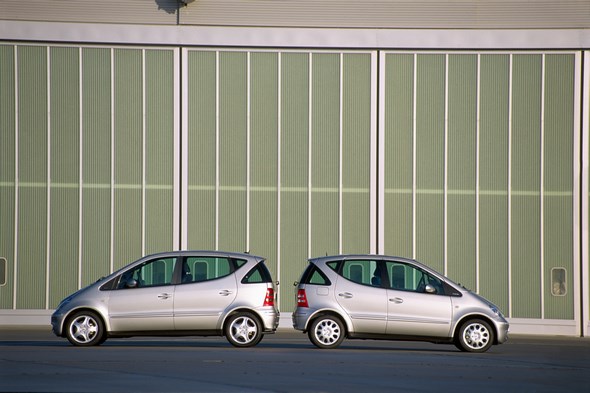 Stuttgart. Mercedes-Benz gave a first preview of the future A-Class at the International Motor Show (IAA) in Frankfurt in 1993, where the brand presented a close-to-production study entitled the “Vision A 93”.

The front-wheel-drive car caused quite a sensation. It showed to impressive effect how Mercedes-Benz had, for the first time, succeeded in resolving one of the classic trade-offs of automotive development: the A-Class brought together compact exterior dimensions, a roomy and versatile interior, as well as the brand’s customary high standard of safety within a unique overall concept.

This made the “Vision A 93” far more than a pure design or technology study. In actual fact, it showed the brand the way forward into a hitherto undefined market segment. It therefore had a decisive impact on the development of the future Mercedes-Benz A-Class (W 168).
The premiere of the ingeniously compact car was anchored in the extensive Mercedes-Benz model initiative at that time. This signalled the brand’s expansion into several new market segments.

The A-Class, for instance, served to extend the portfolio downwards. The compact SLK Roadster (1996) represented a more significant shift towards the lifestyle sector. And in 1997, the arrival of the M-Class created the Sport Utility Vehicle (SUV) segment, which continues to be of great importance today. 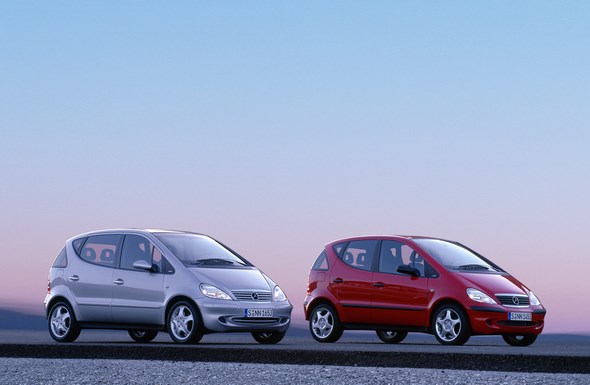 Spaciousness and safety on a par with a mid-size saloon
The production version of the A-Class was unveiled to a global public in March 1997 at the Geneva Motor Show. The all-new model series incorporated more than twenty technical innovations that had never been seen before in this vehicle segment.

The centrepiece was the revolutionary new bodyshell based on the sandwich principle, meaning there was a cavity between passenger compartment and floor plate. This formed part of the sophisticated safety concept, at the same time as providing space for the components of possible future alternative drive systems, such as batteries or hydrogen tanks.

When it came to the disciplines of spaciousness and safety, the A-Class matched the standard of a mid-size saloon. The innovative rear seat unit and the option of a removable front passenger seat gave it the versatility of a mini MPV and enabled the five-seater to transform into a four-, three-, two- or even a single-seater.

In all, there was a choice of 72 different seating variations, while the A-Class had the load capacity of a large estate car: depending on the position of the rear seats, there was 390 to 1340 litres of space, which could be increased even further to 1740 litres by taking out the front passenger seat. The level floor, the large tailgate and the low boot sill all made it easier to load the boot. 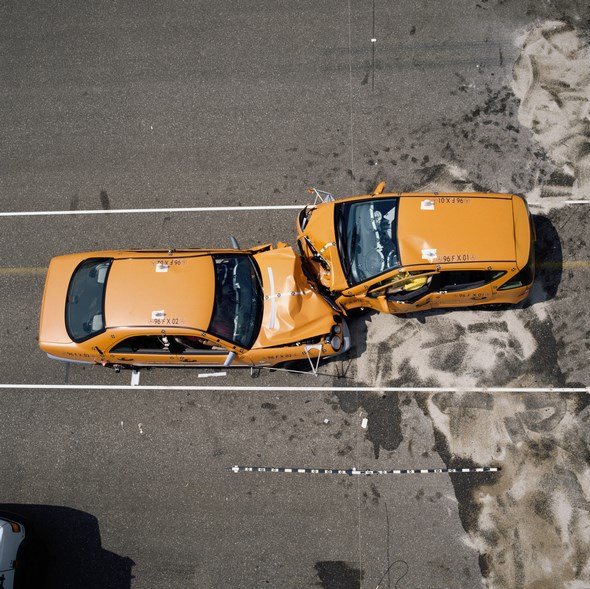 When it came to passive safety, the new model range was of the same high standard as the exemplary Mercedes-Benz E-Class. This was partly down not just to the unique sandwich design principle, but also to the restraint systems fitted as standard. They had been specially adapted to the design of the A-Class with its short crumple zones.

The facelift carried out for the 2001 model year heralded numerous modifications, some of them very extensive, as well as a version extended by 170 millimetres (V 168).

The large-format windowbags first fitted by Mercedes-Benz in the S-Class were also now available for the A-Class as an option.
Besides enhancing the model portfolio, production capacity also needed to be increased for the W 168 series A-Class. The then Daimler-Benz AG opted for a new plant sited in the German town of Rastatt, which was officially opened in May 1992.

At first, painted bodyshells for the mid-size models from Sindelfingen underwent final assembly there, before Rastatt became the production plant for the A-Class. 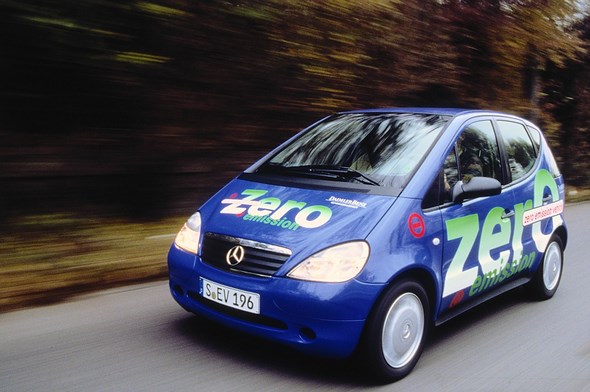 The 169 model series that followed included an E-Cell model with lithium-ion battery brought out in 2011. The fuel cell has also provided power for the A-Class: at the 1997 IAA show, Mercedes-Benz revealed its NECAR 3 (New Electric Car) research vehicle with fuel cell drive. This was gradually refined in several stages and renamed F-CELL in 2002. 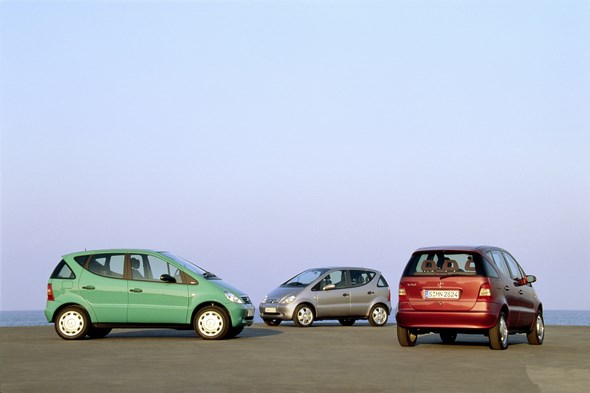 Up until September 2005, a further 63,448 vehicles rolled off the production line at the Juiz de Fora plant in Brazil, which started manufacturing the A 160 in 1998 and the A 190 in 2000. Such strong demand was proof of how the gamble the company once took with the original A-Class had really paid off.

Mercedes-Benz built consistently on this success: the newly developed second generation of the AClass was launched in spring 2004. It was available in both four-door (W 169) and two-door (C 169) versions.

Further additions to the family came in the form of the CLA-Class (C 117, 2013) and the GLA (X 156, 2013). All in all, Mercedes-Benz has succeeded in positioning itself superbly in the compact segment today. This is underlined by the commercial success of all models. 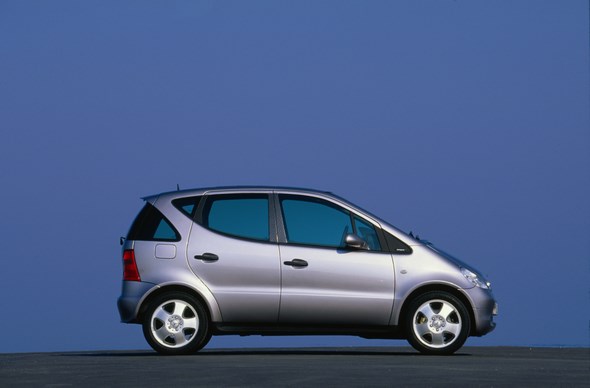