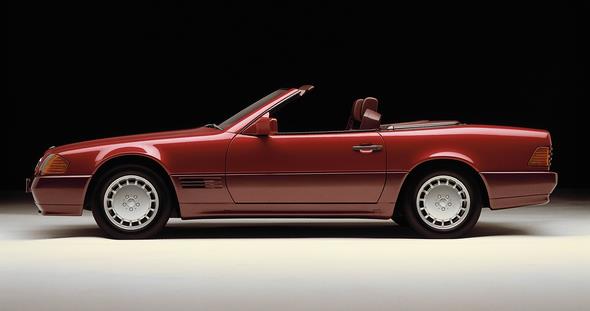 Barely a year after its launch the SL was awarded the international “Car Design Award”. Chief designer Bruno Sacco and his team had done an excellent job. 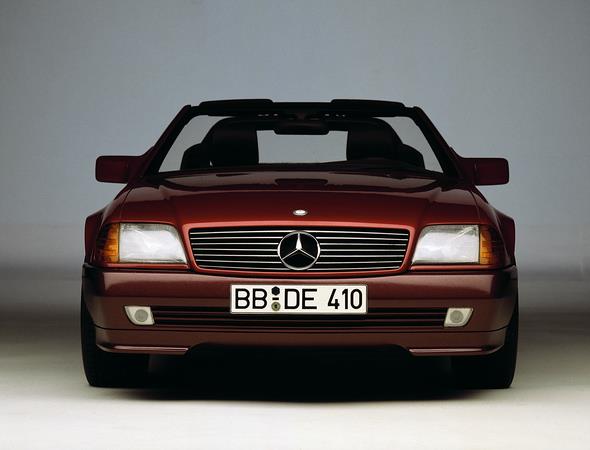 The stylistically assured, no-frills lines of the slightly wedge-shaped body, the flared wheel arches for the wide-base tyres, the half-spoilers forward of the front wheels, a steeply raked windscreen, skilfully modelled rear end, and light-alloy wheels as standard came together here to create an exceedingly harmonious overall effect. 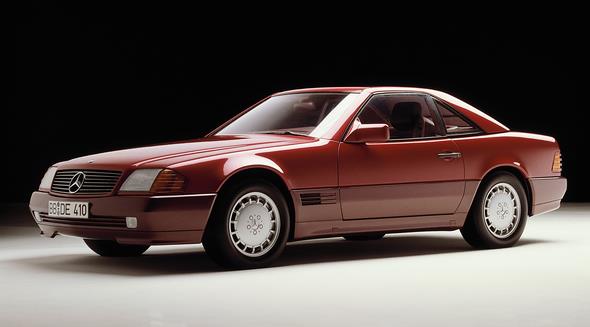 Functionality was also built in: the aerodynamic fine touches, including the underbody and airflow through the engine compartment, added up to a fuel-saving, speed-increasing cd value of 0.32 with the hardtop mounted. A figure of cd = 0.40 was measured for the open-top car with closed side windows. 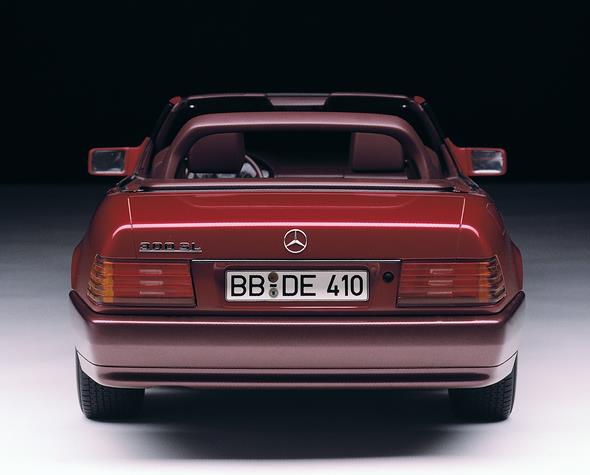 This car set new standards in the area of safety, too. Passive safety was raised to an exceptionally high level for an open-top vehicle through a variety of measures.

An integral part of the safety concept was the automatic roll-over bar, which was implemented here for the first time in a motor car. If a roll-over threatened, the sensor-controlled roll-over bar would be electromagnetically triggered, raised into position by the force of pre-compressed springs within 0.3 seconds and secured by locking pawls. 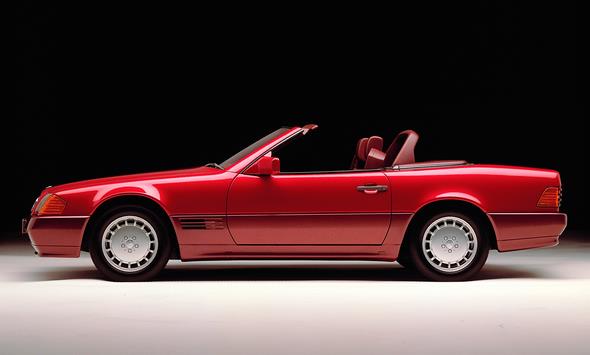 Another component of the safety concept was the SL’s integral seats, which represented a technical masterpiece of design: 20 patents for solutions to various details went into this seat.

The frame and backrest were made of a variety of special magnesium alloys, using a thin-wall casting technique.

They incorporated the three-point seat belt with belt tensioner, belt height adjustment coupled with the head restraint adjustment, and electric stepper motors for fore-and-aft, height and angle adjustment for the seat cushion and backrest. 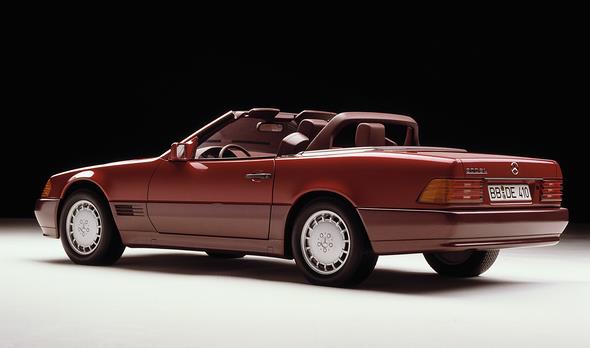 The resistance of the seat in a crash was many times higher than the forces that could possibly arise.

The newly designed electrohydraulic fabric top with which the SL was equipped as standard offered a particularly high level of operating convenience. Simply by operating a switch, the soft top could be opened or closed within 30 seconds. 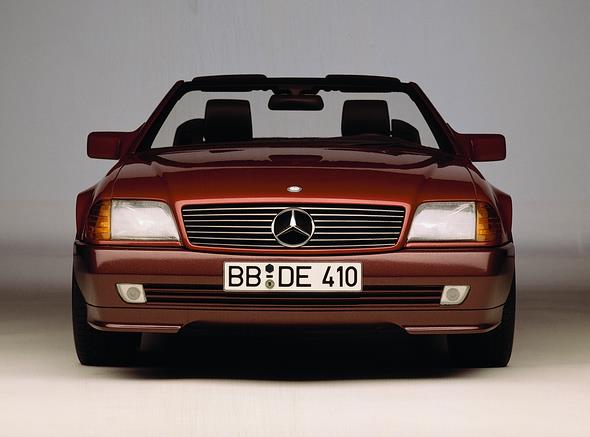 Perfect operation of the roll-over bar under the closed soft top was guaranteed. The standard hardtop was made of aluminium, and despite larger windows weighed just 34 kilograms, about 10 kilograms less than the coupé hardtop of the previous model. 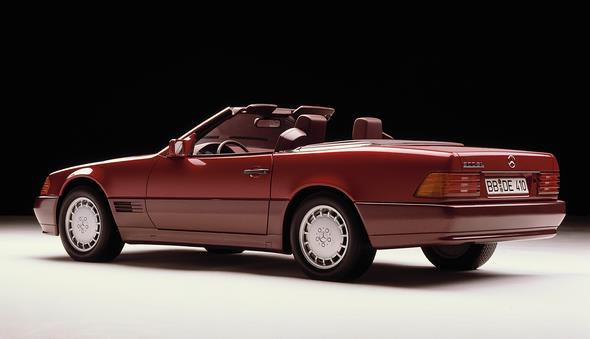 As an optional extra, a newly developed auxiliary system was also available for the SL suspension, representing the most advanced suspension technology realisable at the time and combining three subsystems.

Sprung mass vibrations were reduced in accordance with vehicle load, road conditions, and driving style, which virtually represented a preliminary stage of the active suspension that reached production maturity in 1999 in the model series C 215 Coupé. 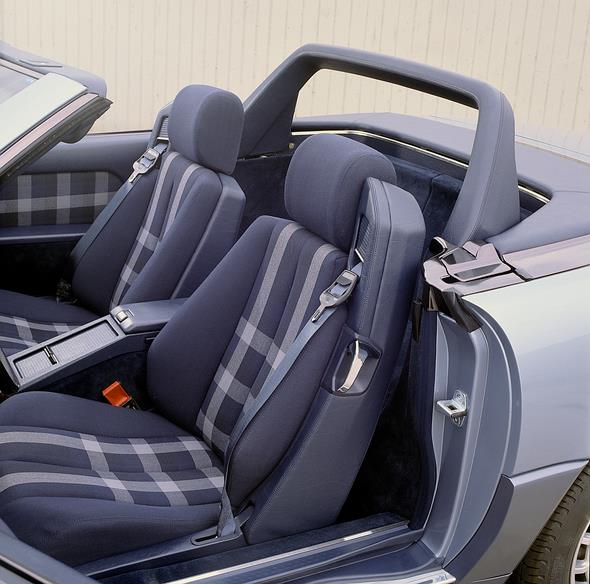 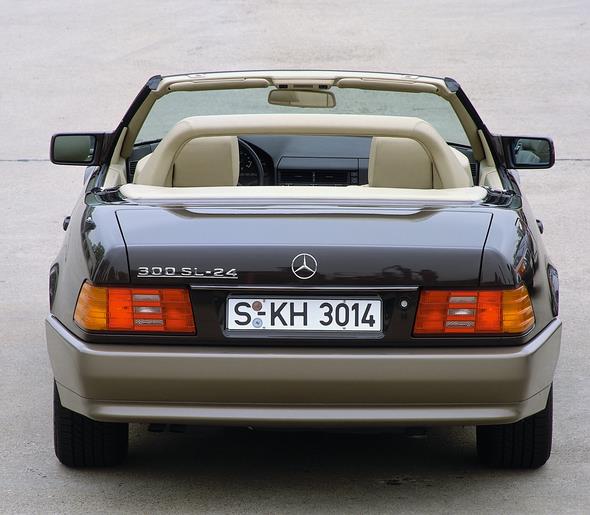 The most powerful engine in the passenger car sales range provided brilliant performance and was the epitome of smoothness and turbine-like power delivery.

Above all, its composed handling in the high speed ranges and the impressive and simultaneously refined manner in which it reached top speed were characteristic of the 600 SL. 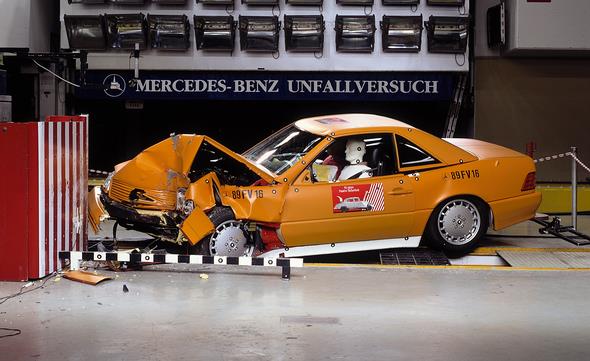 Those still unsatisfied with the output and prestige afforded by the eight and twelve-cylinder engines could turn to AMG in Affalterbach. Over the years it too produced several SL models with powerful drive systems and an overall very sporty focus. 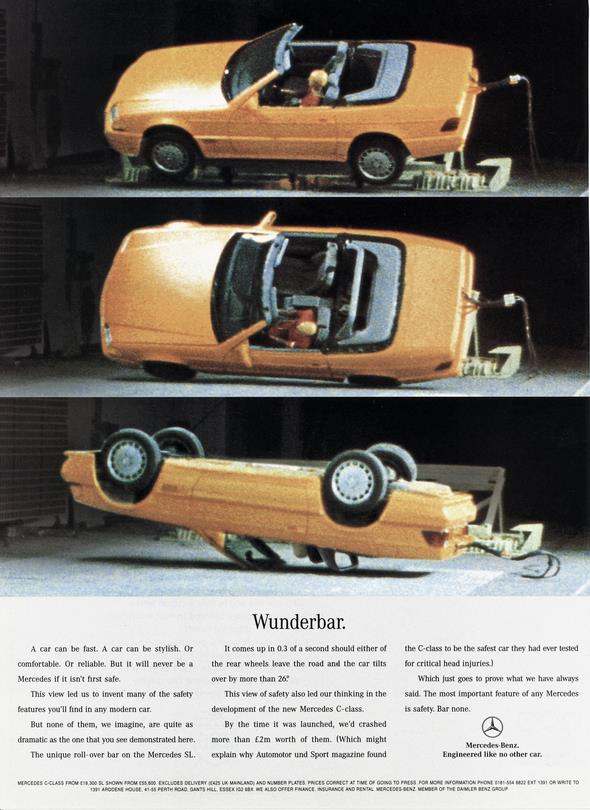 Two facelifts (1995 and 1998) ensured that the R 129 remained fresh. One feature which celebrated its premiere in the SL with the 1995 facelift was the Electronic Stability Program ESP®, designed to assist the driver in critical driving situations.

With this system, sensors detect and compare the steering angle and yaw rate. If the movements do not match, the system is automatically activated. Individual wheels are braked separately in such a way that the vehicle is easier to hold on track. 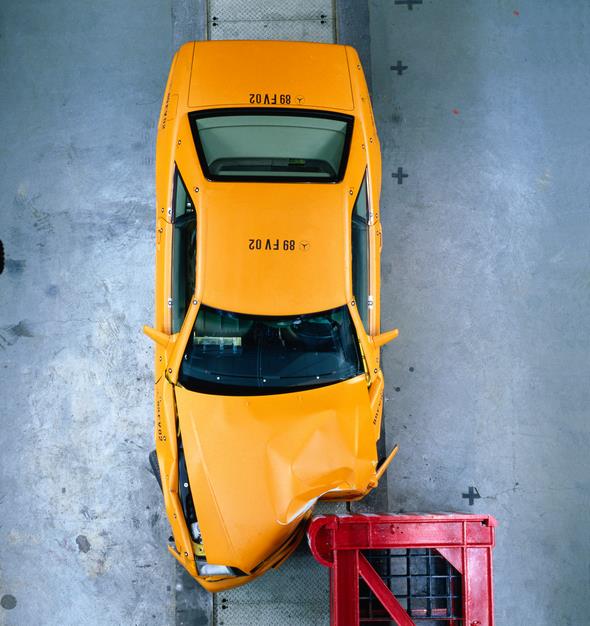 The popular R 129 was also the first SL available in numerous special series. In July 2001, the last of a total of 204,940 examples of the R 129 model series rolled off the production line at the Bremen plant, and its successor made an appearance in the same month in the form of the R 230 model series.

In terms of overall volume, the R 129 was therefore not quite as successful as its predecessor from the R 107 model series with some 237,287 units produced over a period of 18 years. 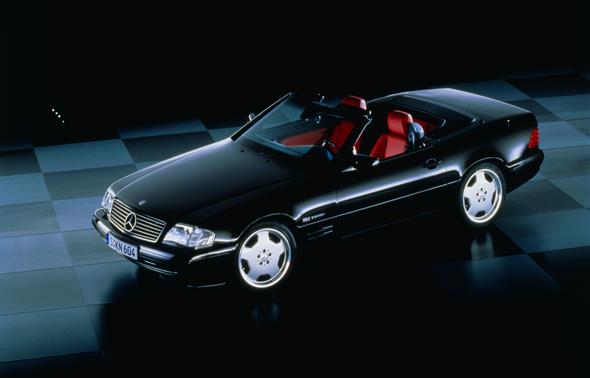 However, when comparing the average annual production, the R 129 model series is very clearly in the lead with some 16,500 units. The most successful model of this model series was the five-litre variant equipped with the M 119 four-valve V8 engine, of which a total of 79,827 were produced from 1988 to 1998. 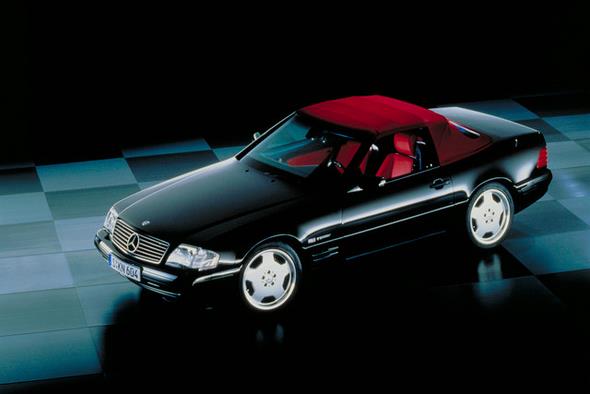 The rarest variant by far is the SL 280 with V6 engine, which served as the entry-level model for the model series from 1997 and rolled off the assembly line only 1,704 times. 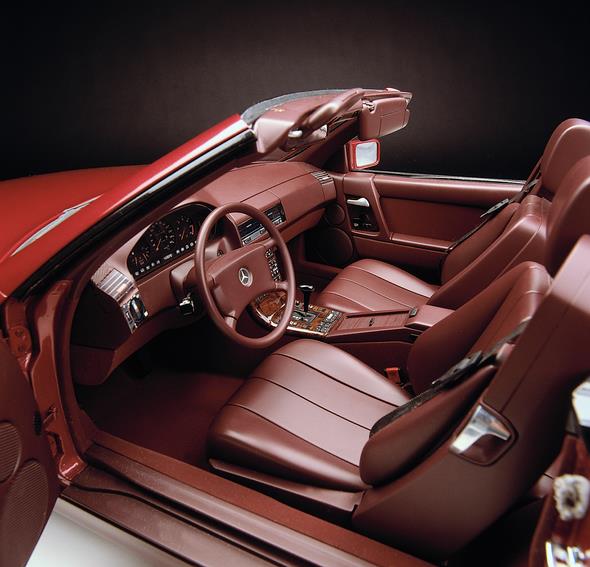 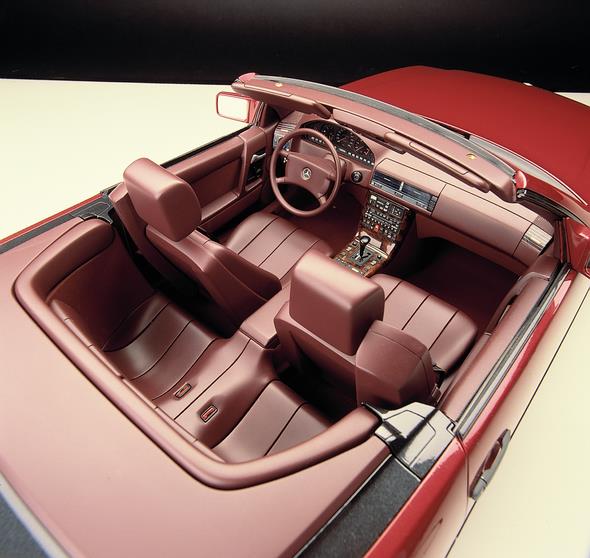 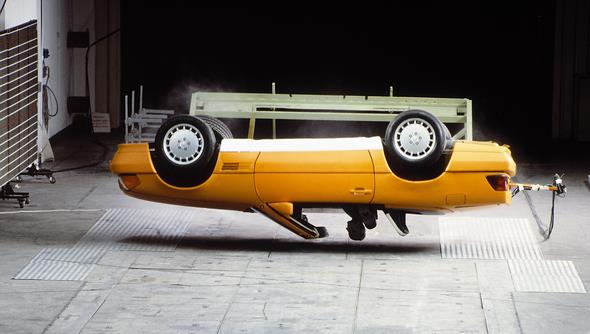