Active Body Control, or ABC, is the Mercedes-Benz brand name used to describe fully-active suspension, that allows control of the vehicle body motions and therefore virtually eliminates body roll in many driving situations including cornering, accelerating, and braking. 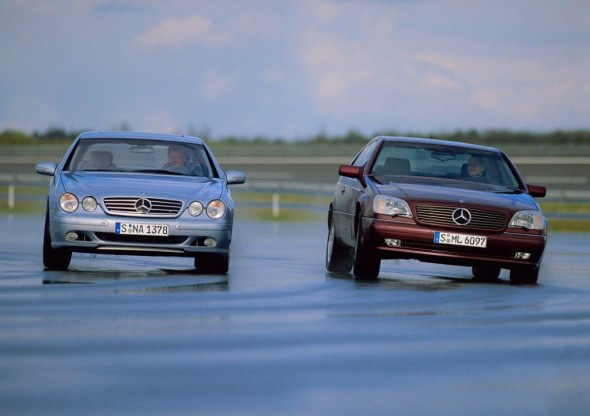 In the ABC system, a computer detects body movement from sensors located throughout the vehicle, and controls the action of the active suspension with the use of hydraulic servomechanisms.

The hydraulic pressure to the servos is supplied by a high pressure radial piston hydraulic pump. A total of thirteen sensors continually monitor body movement and vehicle level and supply the ABC controller with new data every ten milliseconds. 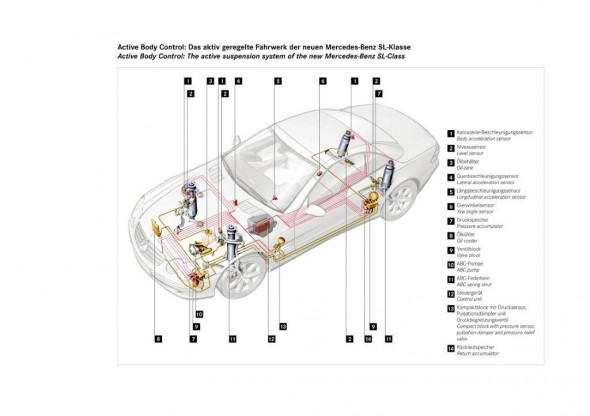 At each hydraulic cylinder a pressure sensor monitors the hydraulic pressure. 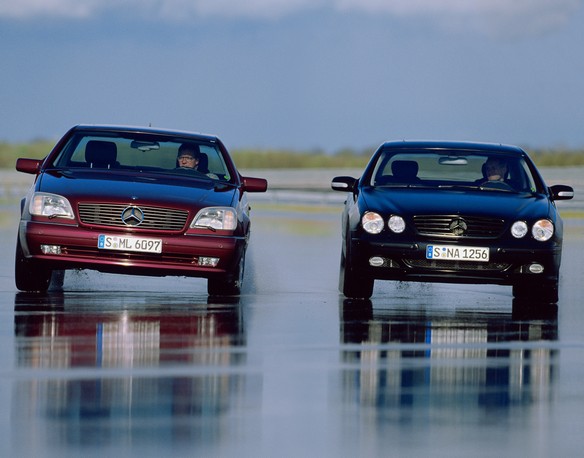 As the ABC controller receives and processes data, it operates four hydraulic servos, each mounted in series on a spring strut, beside each wheel. Almost instantaneously, the servo regulated suspension generates counter forces to body lean, dive, and squat during various driving maneuvers.

A suspension strut, consisting of a steel coil spring and a shock absorber are connected in parallel, as well as a hydraulically controlled adjusting cylinder, are located between the vehicle body and wheel.

This creates a force which acts on the suspension and dampening of the vehicle in the frequency range up to five hertz. 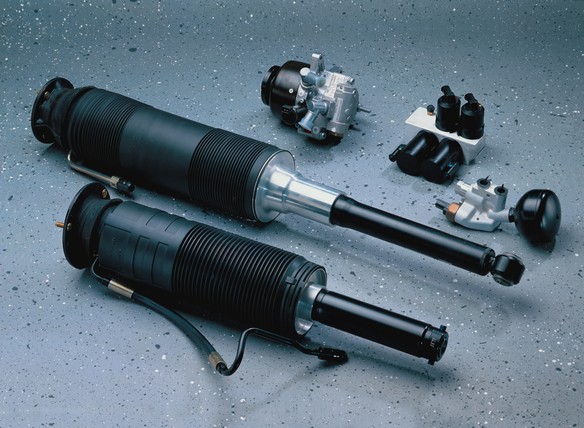 The system also incorporates height adjustable suspension, which in this case lowers the vehicle up to eleven millimeters between the speeds of 60 km/h (37 mph) and 160 km/h (99 mph) for better aerodynamics, fuel consumption, and handling.

The ABC system also allows self-levelling suspension, which raises or lowers the vehicle in response to changing load (i.e. the loading or unloading of passengers or cargo).

Each vehicle equipped with ABC has an “ABC Sport” button that allows the driver to adjust the suspension range for different driving style preferences.

This feature allows the driver to adjust the suspension to maintain a more level ride in more demanding driving conditions. It was introduced in 1999 on the top-of-the-line Mercedes-Benz CL-Class.

This system is standard on all Mercedes-Benz SL and CL Class models and on some S Class models sold in the U.S. 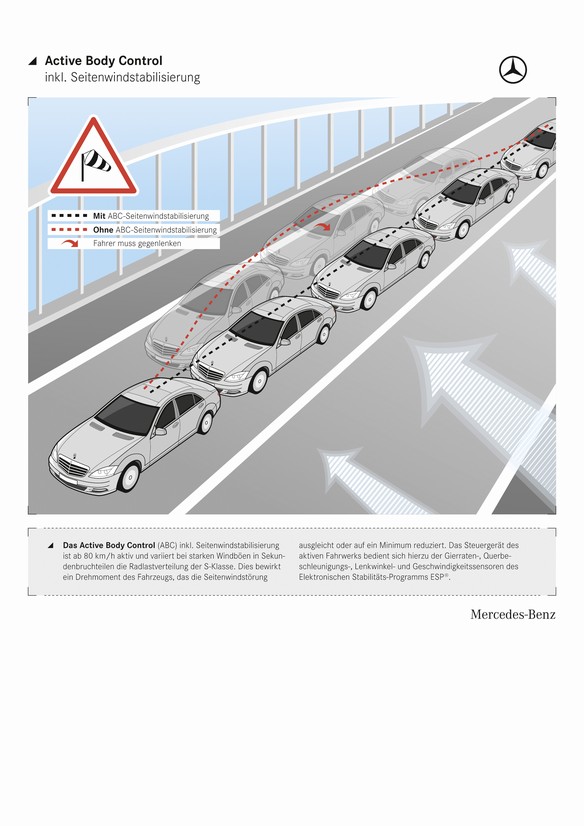 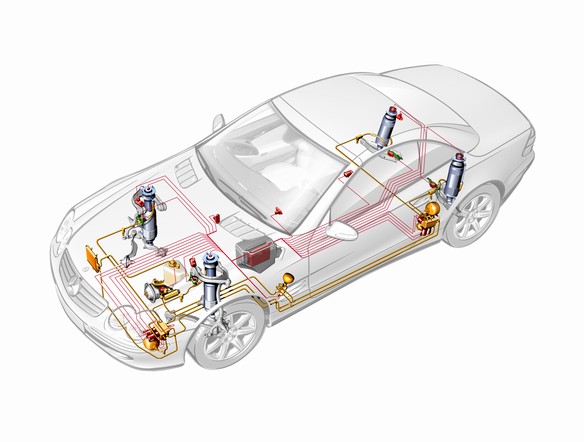 The computer-controlled hydraulic servos or “plungers”, which are mounted in the spring struts between the coil springs and the body, develop additional forces which act on the suspension and damping to control body motion.

ABC is designed to control body vibrations in the frequency range up to 5 Hz – the kind of vibrations typically caused by uneven road surfaces or by braking and cornering.

To control the higher-frequency wheel vibrations, passive gas-pressure shock absorbers and coil springs are used, which can be tuned for high ride quality.

ABC virtually eliminates body movements when moving off from rest, when cornering and when braking. Cornering roll on S-Class models equipped with ABC is significantly reduced and there are also safety advantages in high-speed evasive manoeuvres compared with cars with conventional suspension systems.

A press of a button on the centre console allows drivers to choose between comfortable or sporty suspension settings. The technology behind the new Mercedes-Benz CL-Class: Active Body Control: New Mercedes coupe comes with the very best chassis technology as standard.

Mercedes engineers have now further enhanced the system, which adjusts the suspension to the driving situation within a fraction of a second.

As a result, ABC is now even better, providing superior handling while also ensuring a high level of comfort.

When it introduced Active Body Control (ABC) in 1999, Mercedes-Benz reorganised the alphabet of chassis technology.

The innovative system, which entered series production in the predecessor of the CL-Class after 20 years of research and development, is the solution to the traditional problem associated with the tuning of a passenger car chassis: should wheel vibrations caused by the road surface be kept to a minimum by a sporty, stiff shock absorber configuration, or should the damping be made more comfortable and soft at the expense of handling safety and performance?

Thanks to Active Body Control, this conflict of aims is a thing of the past; the suspension configuration is automatically adapted to suit the current driving situation.

A high level of comfort is accompanied by dynamic performance – or vice versa.

To this end, the four spring struts are equipped with microprocessor-controlled plunger cylinders which almost completely compensate yawing, pitching and rolling movements of the vehicle body.

The computer receives information about the relevant driving situation from the various acceleration sensors, then compares this with the data from the pressure sensors in the spring struts and the level sensors in the steering control arms.

The ABC system translates this information into control signals, which are implemented as precisely metered oil flows by hydraulic servo-valves on the front and rear axles.

When oil flows into the plunger cylinders, these adjust the tracing point of the steel springs integrated into the spring struts, generating the forces necessary to counteract movements of the vehicle body.

Under pressure: body is stabilised within fractions of a second

Owing to the constantly available hydraulic pressure of up to 200 bar, ABC is able to stabilise the vehicle body practically immediately – within a fraction of a second.

The system operates in the vibration range of up to five hertz, the range which causes pitching and rolling movements on uneven road surfaces, side-roll on bends and the typical body dive experienced during braking.

Higher-frequency vibrations and wheel damping are the responsibility of passive twin-tube gas-pressure shock absorbers, which can be configured for excellent comfort.

Mercedes-Benz has enhanced Active Body Control for the new CL-Class and made it even better. Each component has been reworked.

The specialists have now arranged various components into groups, in order to improve the control functions with shorter connecting lines and reduce the installation space required. 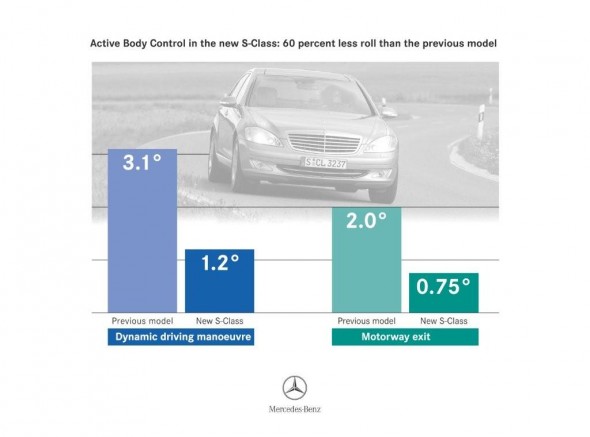 The major advantage of second-generation Active Body Control, however, is its greater efficiency in reducing body movements to correspond to the driving situation.

This is where the Mercedes coupe advances into new dimensions of handling – while simultaneously offering greater comfort that every driver will immediately notice.

The body roll angle, for example, is reduced during a dynamic driving manoeuvre by more than 45 per cent – from the previous value of 2.2 to 1.2 degrees.

When cornering at speed – for example when leaving a motorway – this second-generation ABC suspension reduces the roll angle to just 0.7 degrees.

Other special features of Active Body Control include variable anti-roll control between the front and rear axles, which the system carries out automatically in accordance with the vehiclees speed.

The system also takes the vehicle load into account: on the basis of the plunger and spring travel, the ABC computer calculates the actual vehicle weight and takes it into consideration for the active control function. 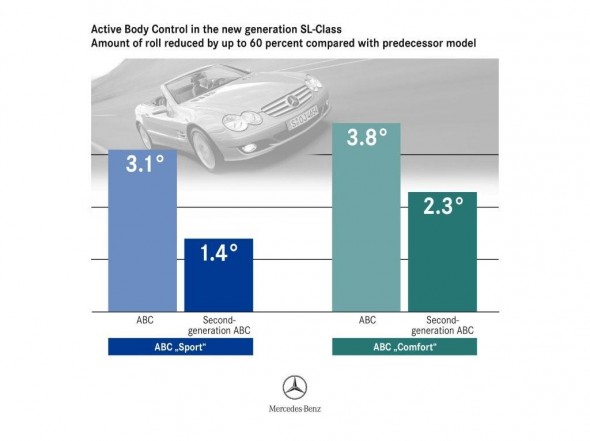 At the touch of a button: individual suspension and transmission characteristics

In addition the new CL-Class features an S/C/M button in the centre console with which the driver is able to modify the overall characteristics of the coupe from comfortable to sporty:

Comfort: In this mode the automatic transmission changes the gears at lower engine speeds, and the CL coupe moves off in second gear.

Sport: The automatic transmission makes full use of the engine speed range in this setting. The ABC suspension operates in Sport mode as well, with a stiffer damping effect on uneven surfaces and bumps.

The characteristic map of the accelerator is also modified, so that the engine responds more rapidly when acceleration is required. 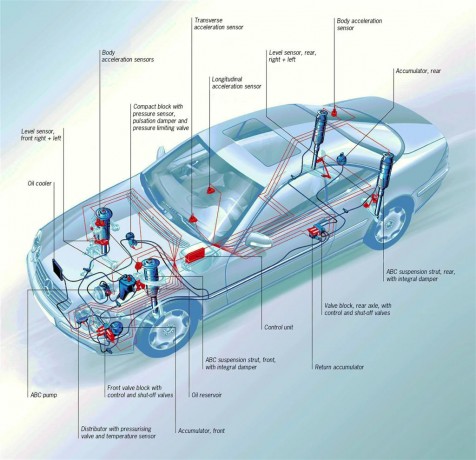 The suspension configuration selected by Active Body Control is the same as in Sport mode, as is the characteristic map of the accelerator.

If the CL-Class is travelling on poor roads which make a higher ground clearance advisable, the driver is able to raise the suspension by 45 millimetres at the touch of a button.

When travelling at high speed in Sport mode, ABC automatically lowers the suspension by up to ten millimetres to reduce aerodynamic drag and lower the fuel consumption.

Mercedes Active Body Control To Go ‘Magic’ in Next Generation

CANNES, France — Mercedes-Benz cars will all benefit from a full new range of premium technologies marketed under the umbrella name “Magic.”

Mercedes Vice President Hans Multhaupt told Inside Line that as revolutionary as Active Body Control (ABC) has been to the upper premium segments, the next big thing is a technology named Magic Body Control.

As Multhaupt tells it, “It had its first try back at the start of the 1990s with the Sauber Mercedes team of the World Sports car Championship Group C and a young driver named Michael Schumacher.

” In 1990 and ’91, the team’s C11 sports car slaughtered the field until a special technology they had developed was finally outlawed.

Magic Body Control will, through sophisticated hydraulics, manage two frequencies of movement — one at the wheels (between 15-20 Hz) and one at the body (5-8 Hz).

These disparate frequencies are a constant challenge for dynamics engineers when it comes to damping NVH.

Magic Body Control technology has been developed jointly by Daimler and ZF, which produces the current ABC. According to Multhaupt, “Everyone is so far blown away by the effects of this Magic Carpet system.”

On rough, undulating pavement and in curves, the MBC bushings — inserted between the strut towers and body — work hydraulically to manage the body’s reactions.

In the end they eliminate 80 percent of the vibration and harshness encountered at the wheels, according to Daimler experts.

In 2011 Daimler will roll out an important range of Magic features and options, starting with a Magic Sky Control sunroof available for the new SLK’s folding hardtop.

This magnetorheological glass system invented by an unnamed U.S. firm and produced by Hitachi, changes from near totally clear to dark blue.

It can also be used for the side windows, rear window, and in the future, in the windshield to effectively eliminate the need for sun visors. The MSC roof glass also does not affect headroom.

Magic Body Control will follow Magic Sky Control in 2012 and 2013 at the S-Class and CL-Class level, and these initial offerings will be followed by two other fresh technologies that Multhaupt refused to discuss.

This “magical” technology relies on a forward-scanning camera to anticipate road imperfections.

Suppliers and carmakers often invite us to tech days to show off their latest gadgets and gizmos. But while it’s always great to speak with the engineers, the new technology often turns out to be little more than a gimmick or—even worse—yet another killjoy nanny system introduced to keep you “safe.”

So our expectations were not at an all-time high as we traveled to Stuttgart last week to drive the next iteration of Mercedes’ Active Body Control (ABC) suspension.

As we sat down with S-class project leader Hans Multhaupt and the company’s super-brain, Prof. Bharat Balasubramanian—he’s the head of product innovations and process technologies at corporate research and advanced engineering (whew!)—the first surprise was the name of the system: “Magic Body Control. 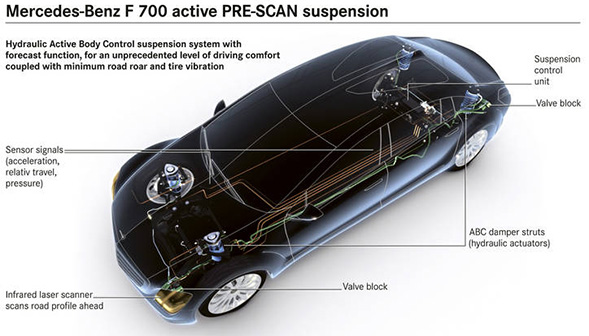 ” What, not another ASSIST or something-TRONIC (capital letters Mercedes’ own)? Nope, and this marks the beginning of a new nomenclature, where the brand’s coolest high-tech options—defined, it says, as those with the most tangible customer benefit and the biggest wow factor—will use the “Magic” appellation from now on.

Mercedes’ current ABC system uses a hydraulic piston to act on each steel coil spring to quickly and independently adjust the suspension on each wheel in reaction to the road surface, and it does a fine job keeping the ride smooth and occupants unjostled. But the key term there is “reaction”—the suspension deals with the bumps after the wheel has encountered them. 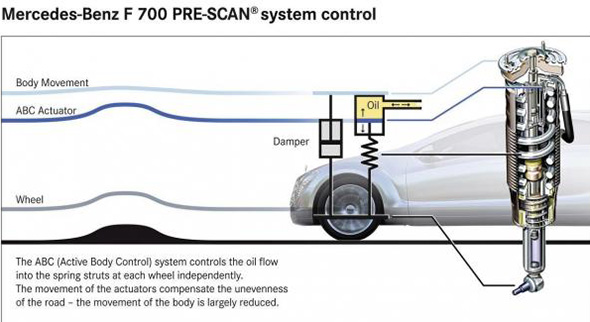 What if the car knew what was coming in advance, with absolute certainty and down to every imperfection? The oil flow at each corner could be adjusted so accurately that any surface flaw could be practically neutralized.

Continued on sourcepage: Car and Driver

Rendering of the facelifted GL