Brake Assist Plus Can Reduce Rear Collisions by 75 Percent 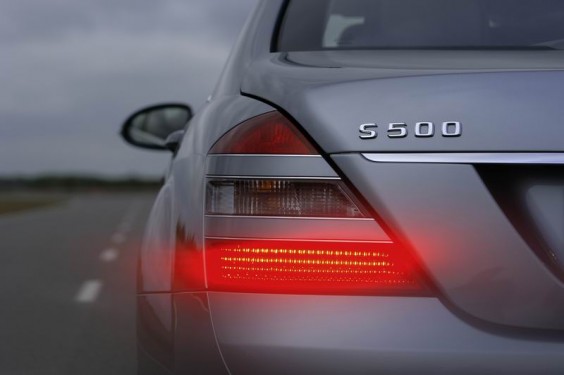 Making its debut on the new S-Class, an optional enhanced version of Mercedes-Benz Brake Assist not only supplies full-power braking in emergency braking situations as soon as the driver applies the brake pedal, but also monitors the distance to the vehicle ahead and adjusts brake pressure if the driver doesnt brake hard enough.

While conventional Brake Assist is only triggered by the drivers reflex reaction on the brake pedal, Brake Assist Plus also considers the closing speed of the vehicle ahead based on radar signals from Distronic Plus. 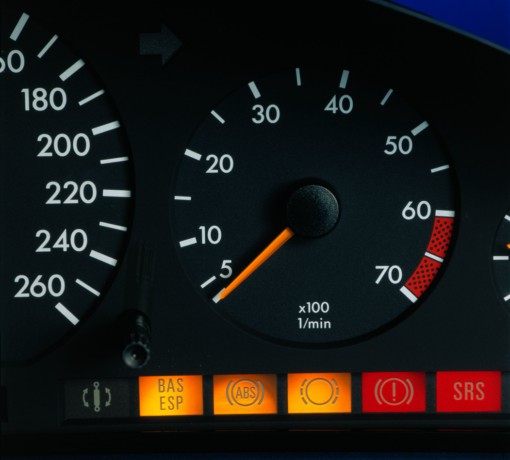 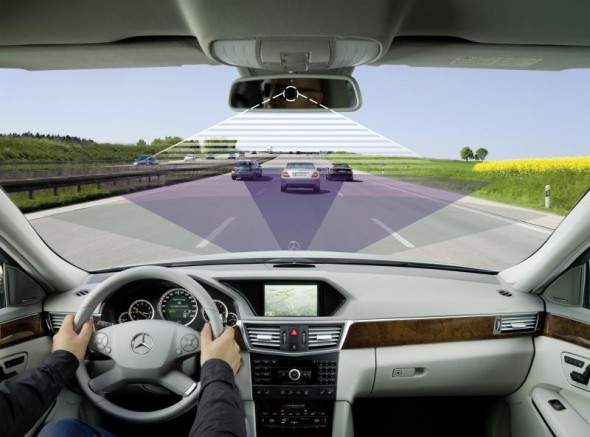 BAS is essentially the result of interesting discoveries made by passenger car development engineers during their analyses of accidents.
The engineers found that in many cases drivers reacted correctly and quickly enough in critical situations.
For example, they tended to step on the brakes hard and fast when impact seemed imminent.
However, the researchers also discovered that the drivers often applied too little force. For instance, in the case of an imminent impact, drivers frequently failed to engage the full power of the braking unit.
The result was often a collision with the vehicle in front. BAS prevents this from happening.
Its electronic system interprets the rapid pressure applied to the brakes as an attempt to implement an emergency braking maneuver.
It then generates maximum braking pressure, regardless of how forcefully the driver actually engages the pedal. 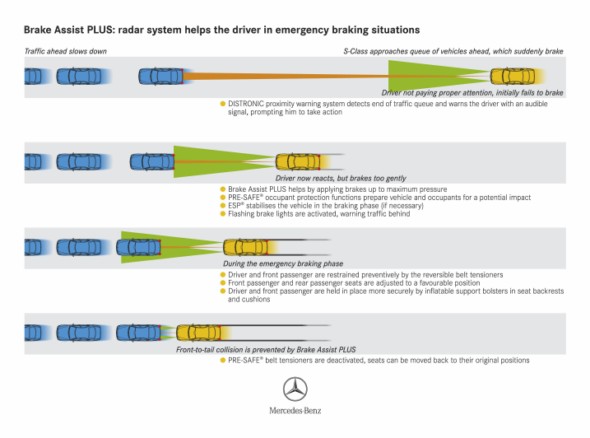 Brake Assist PLUS uses two radar systems. Both of these radar systems are very good at not only registering objects up ahead but also calculating the distance from these objects and their relative speed.
If the distance between the vehicle and the registered object is so small that there is a real danger of collision, Brake Assist PLUS issues a visual warning on the instrument cluster display and sounds an alarm over the car speakers.

While this is happening, the electronic system calculates the braking deceleration necessary to avert the collision.
If the driver then hits the brakes, the braking pressure needed to bring the vehicle to a stop before impact is immediately provided automatically.
Ensuring that an appropriate braking force is not exceeded gives those driving behind more time to react.
The PRE-SAFE® Brake for passenger cars goes a step further and brakes the vehicle if an acute risk of a head-to-tail collision is detected and the driver fails to react to the warnings.

Mercedes-Benz has continued to further develop the PRE-SAFE® Brake, which was first unveiled in 2006.

From spring 2009, a version of the system that activates the maximum braking power automatically if there is an acute risk of an unavoidable accident will be available for the new E-Class and the S-Class.

The PRE-SAFE® Brake therefore acts as an electronic crumple zone and can greatly reduce the severity of an impact. 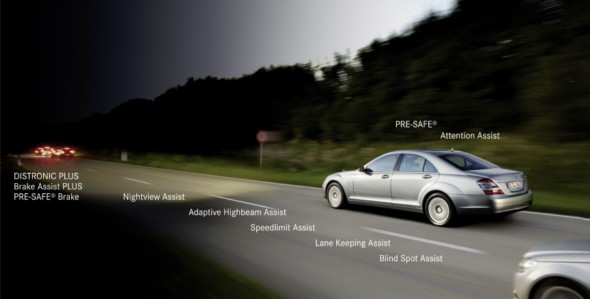 What’s more, it does this in two stages: around 1.6 seconds before the calculated impact point – after three audible warning signals – the system initiates partial braking autonomously and decelerates the car with around 40 percent of the maximum braking power.

Designed to supplement the visual and audible warnings, autonomous partial braking gives the driver a further, perceptible signal to act.

If the driver then brakes immediately, the maximum braking force is made available or, if the driver swerves, the accident can be avoided at the last moment, depending on the driving situation. 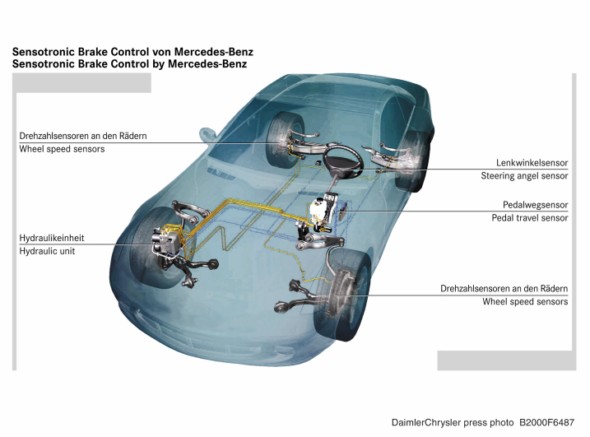 Mercedes will be offering a further enhanced version of this safety system from spring 2009.

If the driver fails to react, even after automatic partial braking, the PRE-SAFE® Brake activates the maximum braking power around 0.6 seconds before the now unavoidable collision.

This emergency braking can greatly reduce the severity of the impact. The system therefore acts like an “electronic crumple zone”, offering the car occupants even greater protection. 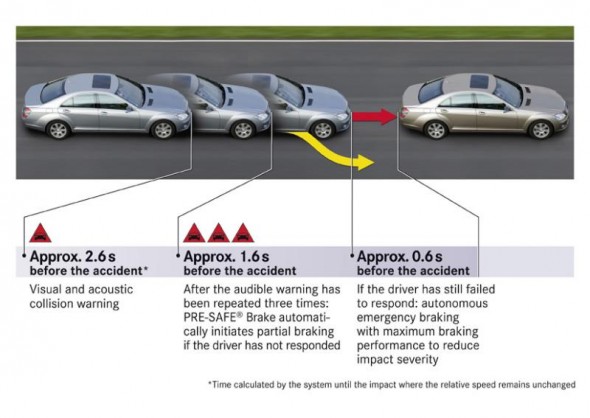 • Situation-related braking assistance when an accident threatens
• Accident rate reduced from 44 to 11 percent in simulator tests
It was in 1992 that Mercedes engineers conducting tests in the driving simulator found that while the majority of male and female drivers operate the brake pedal rapidly in an emergency situation, they often do not do so with sufficient force.
The braking performance is therefore not used to the full, and the braking distance is considerably increased.
These findings led to the development of Brake Assist, which first entered series production in 1996 and has been standard equipment in all Mercedes cars since 1997.
The technology interprets a certain speed with which the brake pedal is depressed as an emergency braking situation, and builds up the maximum braking assistance within fractions of a second.
This significantly shortens the vehicle’s braking distance – by up to 45 percent at 100 km/h on a dry road surface, for example.
Brake Assist has proven its worth millions of times since its invention. It not only helps to prevent rear-end collisions, but also contributes greatly to pedestrian protection.
This was demonstrated by a Mercedes-Benz study in the driving simulator: 55 male and female drivers were asked to drive through a town, and a child suddenly ran into the road.
An accident could only be avoided by emergency braking. The result was that drivers with the benefit of Brake Assist had significantly fewer accidents than those without the system.
The accident rate was reduced by 26 percentage points with Brake Assist.
Brake Assist PLUS: two radar systems looking ahead In the new S-Class, Mercedes-Benz has expanded Brake Assist into a preventive system which assists the driver even more effectively than before in critical situations.
The system is based on radar technology: it registers the distance from vehicles ahead, warns the driver if the gap is too small and calculates the necessary brake force assistance if a rear-end collision threatens.
If traffic tails back and the driver is obliged to operate the brake pedal, the new Brake Assist PLUS instantly builds up the braking pressure required to manage the situation.
While reflex-like operation of the brake pedal is necessary with a conventional Brake Assist system, the new system already detects the driver’s braking intention when the pedal is depressed and automatically optimises the brake pressure.
This meets one of the major conditions for preventing rear-end collisions, namely the best possible deceleration for the situation in hand.
Schematic diagram Preventive Brake Assist PLUS uses two radar systems to monitor the traffic
situation ahead of the vehicle: a newly developed close-range radar based on 24-Gigahertz technology works together with the 77-Gigahertz radar of the DISTRONIC PLUS proximity control system.
These systems complement each other: while the DISTRONIC radar is configured to monitor three lanes of a motorway to a range of up to 150 metres with a spread of nine degrees, the new 24-Gigahertz radar registers the situation immediately ahead of the vehicle with a spread of 80 degrees and a range of 30 metres.
Testing: successful trials with about 300 drivers Mercedes-Benz has intensively tested the effectiveness of this innovative technology in the driving simulator and in practical trials:

Statistics compiled by the road safety authority NHTSA in the USA show that around 31 percent of all accidents with fatalities or injuries are rear-end collisions.

The future: from Brake Assist PLUS to the PRE-SAFE® braking system Brake Assist PLUS has the potential to achieve further milestones in safety technology: on the basis of radar sensors, Mercedes engineers are working on a system which monitors the traffic situation ahead of the car very precisely.
If the driver fails to respond even after a warning that an accident is impending, the technology automatically initiates braking action and activates the PRE-SAFE® functions in the interior after a certain level of deceleration.
This autonomous braking intervention with a deceleration of up to about 0.4 g prompts the driver to act, i.e. to brake hard or take evasive action.
The PRE-SAFE® braking system then assists as the situation requires, with the aim of preventing the imminent collision or reducing the impact energy if a collision is unavoidable.
In the future this innovative technology could also be developed into an autonomous braking system which is automatically activated when danger threatens and initiates emergency braking action – a further step on the way to the “vision of accident-free driving”, the long-term goal of safety developers at Mercedes-Benz.
Tags
bas brake assist plus w221