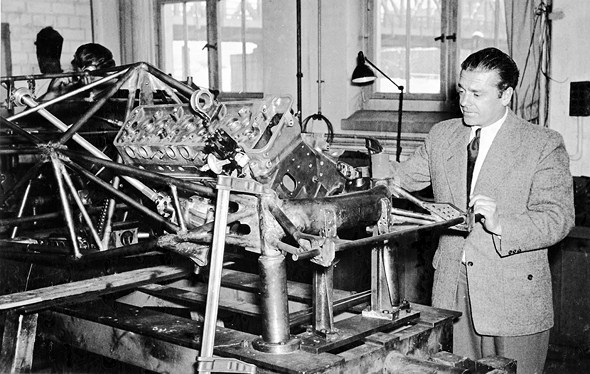 The Mercedes-Benz 300 SL (W 194 series) racing car unveiled in 1952 was clearly engineer Rudolf Uhlenhaut’s achievement. For it was Uhlenhaut, one of the rare automotive specialists with a great talent for design, who created it, laying the basis for racing successes as well as for the subsequent 300 SL (W 198) production sports car.

After his graduation in 1931, Rudolf Uhlenhaut was recruited by Research Director Fritz Nallinger, initially as plant assistant for testing. Nallinger rapidly recognised Uhlenhaut’s skill as a “driving engineer”. Because Uhlenhaut would drive whatever he could get his hands on – and did so rapidly and consummately tackling anything, for example, from the monstrous Mercedes-Benz G 4 three-axle off-road vehicle to the 500 K lightweight sports roadster, the latter in the tour “2000 km through Germany” – Uhlenhaut felt at home in any and everything that had wheels. His successful career as a racing-car developer from 1936 was also initiated by Nallinger. 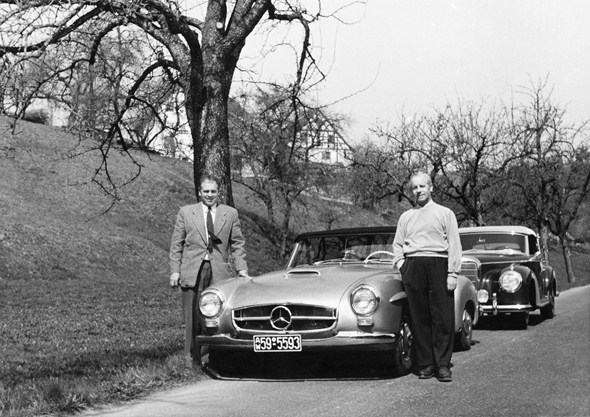 But how did Uhlenhaut’s brilliant creations come about? The answer lies in his multifaceted personality. He was born in London in 1906 – English was his first language – and embraced engineering as a career. However, if one were to imagine him as a designer in a white lab coat standing at the drawing board, as was usual in those times, one would have to think again! Because Uhlenhaut was more likely to be found in some vehicle or other, or in the workshops devising solutions with his colleagues. 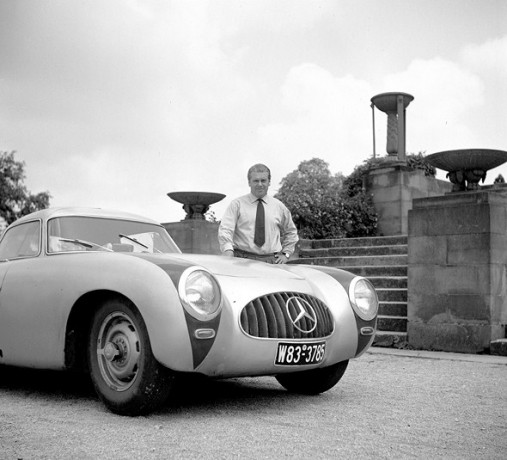 There is a famous anecdote from the 1950s: on one occasion he sent two young engineers to his friend Josef Müller in the design department and announced them by phone with the following statement: “Josef, I’m sending two of my youngsters over. Please have your people retrace whatever they tell you. And mind you, I mean retrace, and not rethink!” 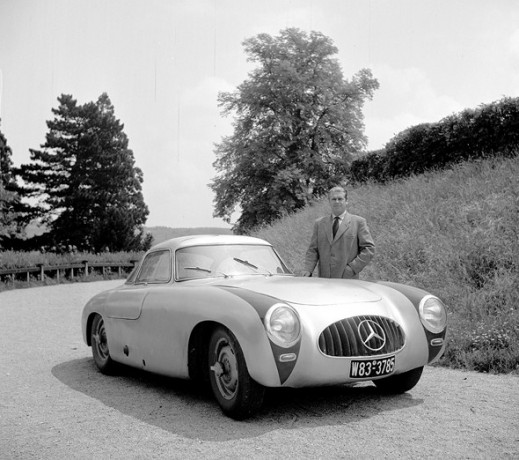 Two things were highly typical of Uhlenhaut: he developed his ideas from practical experience and he always treated his colleagues, whether in the workshop or in the office, as equals and never patronised them. His composure and authority coupled with his competence meant that his superiors also treated him on an equal standing, too. 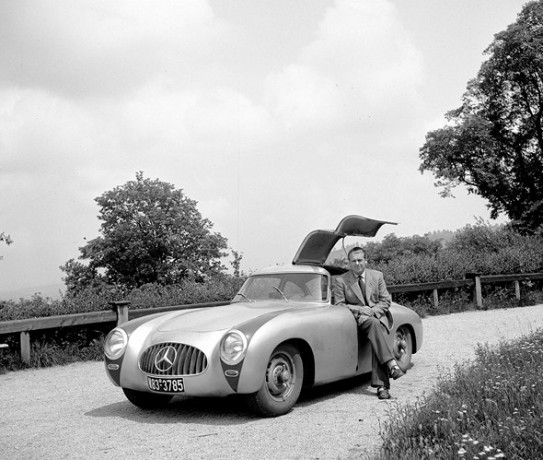 After the Second World War, Uhlenhaut soon became involved with sports vehicles again. He was employed by British Colonel Michael McEvoy of the Royal Electrical and Mechanical Engineers to build a small racing car for him. Both had been acquainted in the pre-war years, when McEvoy was working on the installation of Zoller compressors in racing engines. 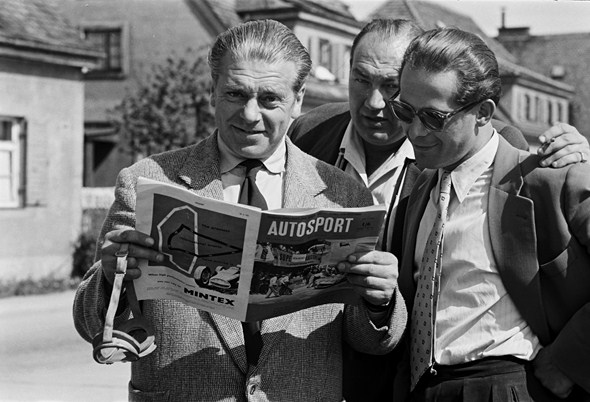 Uhlenhaut designed a frame made from closed tubular triangles for the small racing car. The individual tubular segments were only stressed through pressure or tensioning. This enabled the frame to be lightweight yet sturdy, guaranteeing a high degree of torsional and bending rigidity. 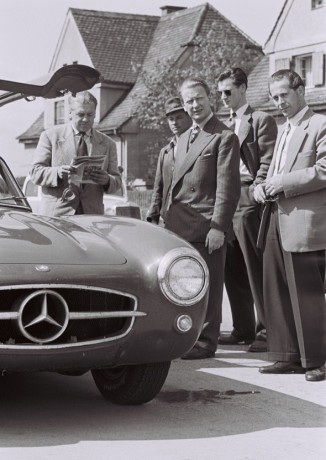 The idea of segments subjected only to tensional and compressive forces was new although tubiform frames had in fact existed before then. Uhlenhaut adopted the space frame principle for the 300 SL racing car (W 194 series): the frame had a final weight of between 64 and 68 kilograms, which not only made it lighter but also more torsionally rigid than the X-oval tubular frame of the pre-war W 154. 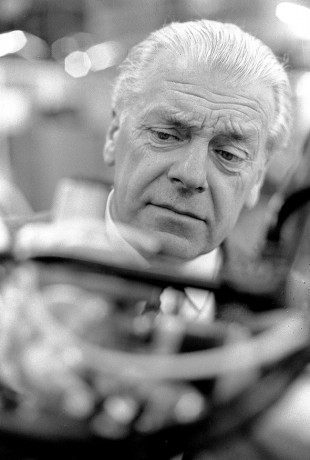 Due to time and cost constraints, it was imperative for Uhlenhaut to use the engine from the prestigious Mercedes-Benz 300 saloon (W 186 series) for the 300 SL, so he reflected on ways to reduce the vehicle’s aerodynamic resistance.

The solution: rotating the engine by 50 degrees towards the left and providing it with a dry-sump lubrication system enabled the height to be reduced. Thanks to this change the 300 SL had a very low front and low head resistance.

Uhlenhaut’s concept was successful. In December 1952 he summed up the sports performance of the 300 SL with the following words: “The races run in 1952 have shown that the 300 SL with a naturally-aspirated engine was at least equal – if not superior – to even the strongest opponent; but also that its acceleration on good roads was significantly less than that of the Ferrari 4.1 litre, and somewhat lower than that of the Ferrari 3 litre and 2.3-litre Gordini. However, the opponents’ inferior operational reliability and the great endurance of the 300 SL generally led to victory for our brand.” 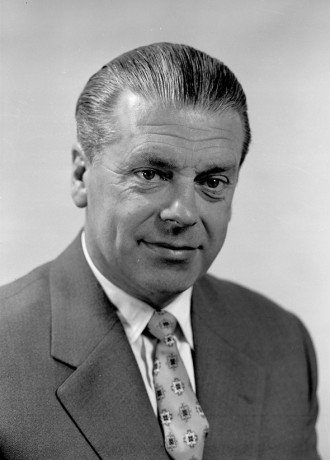 Uhlenhaut’s concept for the 300 SL – and in particular the car with chassis number 11, further developed and prepared by him for the 1953 racing season – was so convincing that it was adopted for the new racing cars for the 1954/55 seasons. As Head of Development for Passenger Cars he had a decisive role in the development and suspension tuning of all SL models up until the 107 series that had its premiere in 1971. Rudolf Uhlenhaut retired on 30 September 1972. 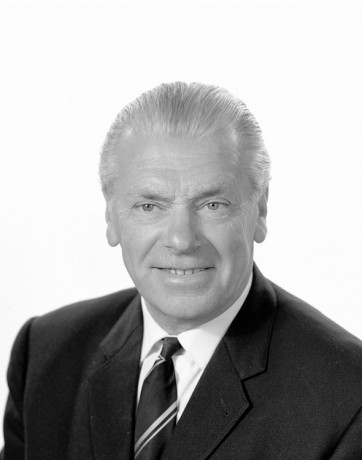 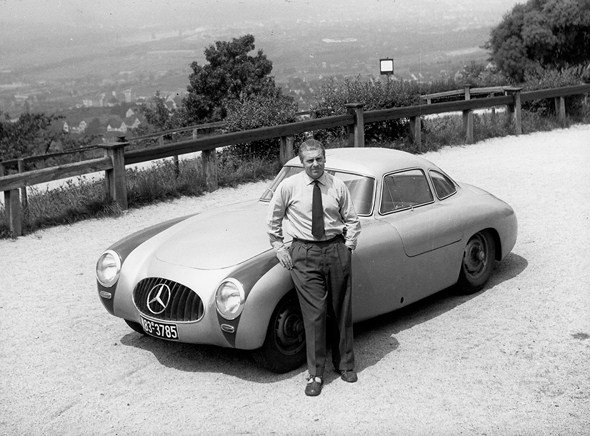 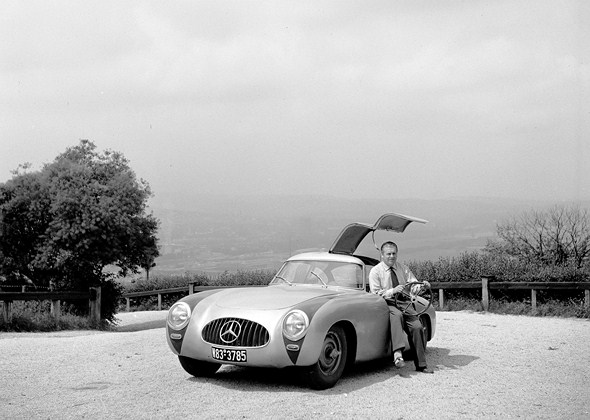 The development of the A-Class