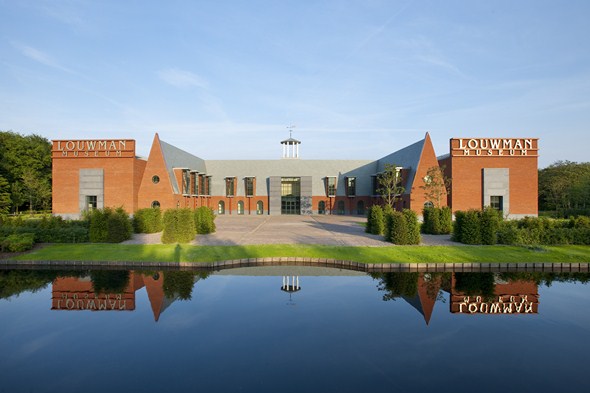 Stuttgart/The Hague – Mercedes-Benz Silver Arrow cars are motor racing icons, known and loved all around the world. A special exhibition devoted to the history of these amazing vehicles from 1934 to 1939 is to run from 11 October 2012 to 6 January 2013 at the Louwman Museum in The Hague.

Starring in this very special show will be a selection of stunning original vehicles from the Mercedes-Benz Classic collection.

This joint initiative with the Louwman Museum, which opened at its current location in 2010, is the most ambitious collaboration of its kind ever undertaken by the world’s oldest automobile manufacturer. As well as housing the world’s oldest private automobile collection accessible for public viewing, the Louwman Museum also ranks as the Netherlands national motoring museum.

The six exhibits on display in the “Silver Arrows 1934–1939” exhibition in the large hall of the Louwman Museum comprise the racing cars W 25, W 125, W 165, and W 154, and also the 1936 12-cylinder W 25 record car. The record car will be displayed with a replication of the fully streamlined body made for this extraordinary vehicle, with the original body shown alongside as a separate installation. 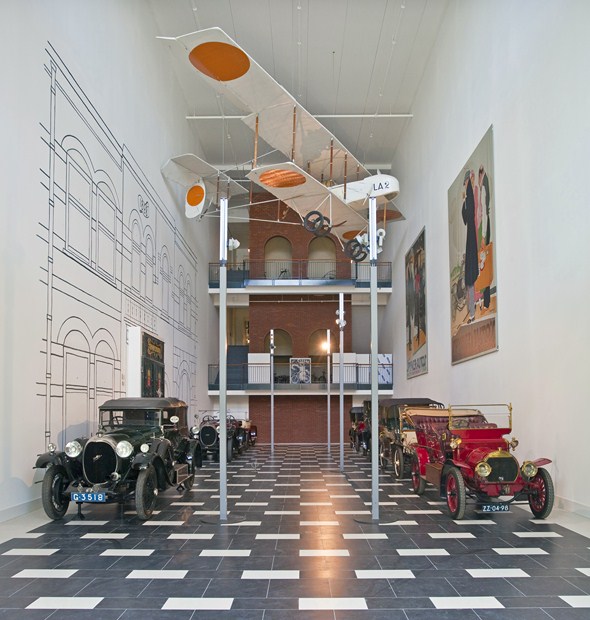 Numerous other exhibits and photographs from the holdings in the Mercedes-Benz Classic collection will help to recount the story of the Silver Arrows and those who drove them. The items on display will provide unique insights into the lives of legendary drivers such as Rudolf Caracciola, Manfred von Brauchitsch, and Hermann Lang, both on and off the racetrack.

And, of course, the charismatic personality of Alfred Neubauer, the dynamic racing team manager who orchestrated the triumphs of the Silver Arrows with such consummate skill, will be a central figure in the exhibition. 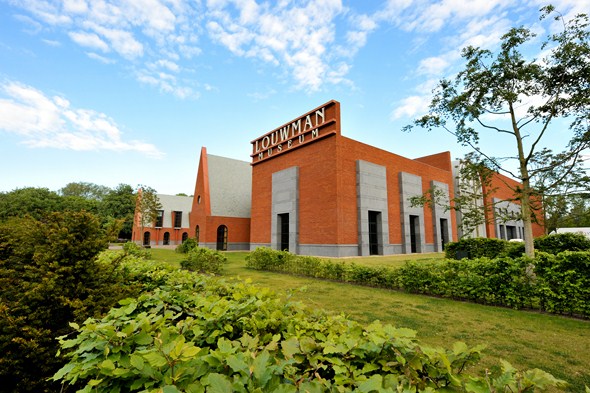 The Mercedes-Benz Museum is the world’s only institution that presents more than 125 years of automotive history in an unbroken sequence, right from day one. A total of 160 vehicles and more than 1,500 exhibits are on display over an exhibition area of 16,500 square metres, on nine levels.

The museum sees itself as a centre of innovation, highlighting the ways in which the historical tradition continues to radiate out into the present and future.

The interior of the museum building is based on the double helix of the structure of DNA that carries the human genetic code. This reflects the Mercedes-Benz brand’s commitment to originality, as it continues to invent the future and build a multifaceted brand. 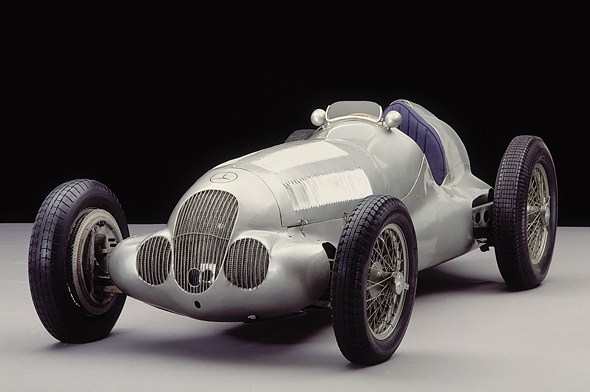 The exhibition areas of the museum take visitors on a unique journey through time, covering the entire history of the automobile. They first take the lift up to the top level of the museum building. On arriving in the year 1886, they have a choice of two symmetrically opposed, regularly intersecting spirals, leading them through a series of broad curves past the many and varied exhibits back to the starting point.

The first spiral traverses a chronological succession of seven “myth spaces” recounting the story of the brand, each devoted to a particular epoch. The second spiral showcases the vehicles in a series of five themed collection spaces, portraying the multiple facets of the brand portfolio and the museum collection across time boundaries. Visitors can cross from one spiral to the other at any time. Each itinerary ends in a banked curve featuring the “Silver Arrow – Races and Records” display.

The exhibition also includes the “Fascination of Technology” display, providing a glimpse of the everyday working environment at Mercedes-Benz and presenting some key themes for the future of the automobile.

For over 125 years, the three-pointed star has shown the way ahead for the automobile, with unique innovations and timeless elegance. Mercedes-Benz Classic aims to bring the tradition and enduring myth of Mercedes-Benz to life for the public today, through the Mercedes-Benz Museum, and also with other activities at different locations.

The Mercedes-Benz Classic Centers, based at Fellbach (Germany) and Irvine (USA), are the first port of call for anything to do with service and know-how on classic Mercedes-Benz vehicles. The experts here restore, check and service classic cars with specialist expertise accumulated over 125 years of automobile construction. They have 50,000 original parts in store, and can even manufacture one-off items on request.

And for anyone looking to buy a classic car, the Mercedes-Benz Classic Center can offer a very special service: a range of exclusive Mercedes-Benz vehicles are always on display in the showroom, already thoroughly checked out in the workshop, and now available for sale. The range includes cars such as the legendary Mercedes-Benz 300 SL Gullwing model and rare supercharged (Kompressor) models from the pre-war era.

Accredited Mercedes-Benz clubs form a vital link between the manufacturer and the owners of classic vehicles bearing the three-pointed star. The benefits of membership of the worldwide community of official Mercedes-Benz brand clubs include support for events, rallies and trade fairs, and exclusive offers from Daimler AG.

The activities of these official brand clubs are highly valued by Mercedes-Benz Classic, since the care lavished on these very special vehicles helps to maintain our proud tradition.

Our corporate “memory” is preserved in the archives and the collection of a large number of documents and vehicles from the 125-plus year history of the company and its products – a unique and comprehensive repository of automotive expertise. 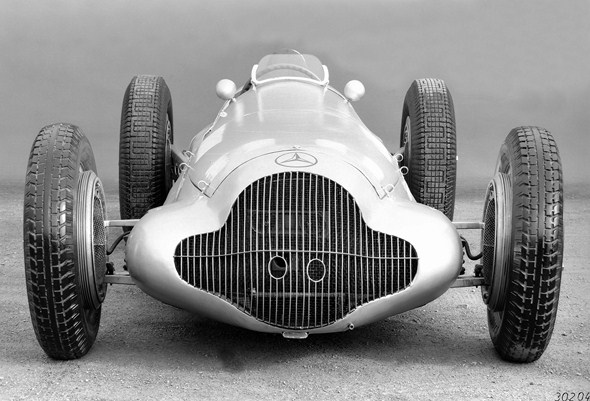 The Mercedes-Benz Class Center also offers a specialist service for checking the authenticity of vehicles. The main demand for the material in the archives is from Daimler AG itself, which uses the information for preserving its heritage for future generations. Some of the archive material is also available to the public, primarily journalists, academics, historians and writers.

Sightseeing attractions recalling the history of the automobile

The automobile appears as a constant refrain in any survey of human achievements over the centuries, as the invention that changed the world. Its rich and eventful history dates back more than 125 years.

That history is enshrined in sightseeing attractions all around the Stuttgart region – such as Gottlieb Daimler’s birthplace, the Gottlieb Daimler memorial, Carl Benz House, the Dr. Carl Benz Auto Museum, the Maybach Museum, and the Unimog Museum. 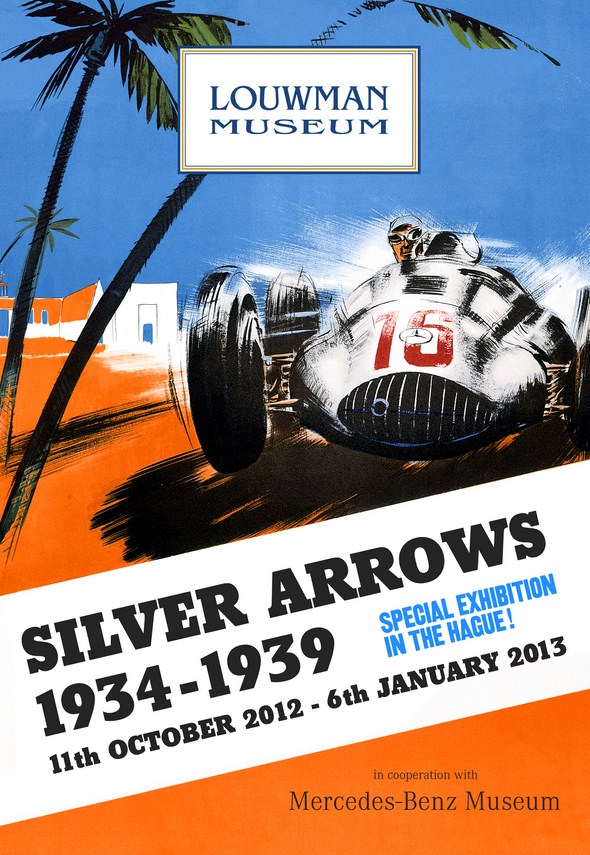 In 1934, a Dutch automobile dealer named Pieter Louwman purchased a 1914 Dodge, which marked the beginning of a unique collection of historic automobiles and laid the foundations for today’s museum with a collection of more than 230 historic vehicles and the world’s largest collection of automotive art.

A love of classic cars clearly runs in the Louwman family, because the institution is now in the hands of the founder’s son, Evert Louwman.

The permanent exhibition is divided into four sectors: “The Dawn of Motoring”, “Motoring”, “Racing”, and “Luxury”. The museum’s holdings include the world’s largest collection of Spyker vehicles, and its De Dion Bouton et Trépardoux, made in 1887, is now reputedly the world’s second-oldest car.

In 2010, the Louwman Museum relocated to a three-storey building in The Hague, designed by the American architects Michael Graves and Gary Lapera. The building provides more than 10,000 square metres of exhibition space for the collection that was previously on show in Leidschendam as the National Automobile Museum, and in Raamsdonksveer as the Louwman Collection. 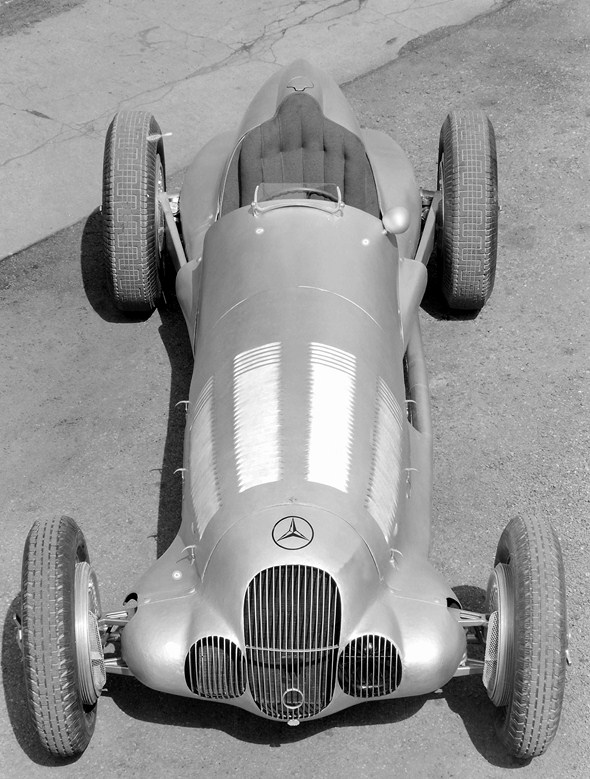 The story of the development of the Mercedes-Benz W 25, raced from 1934 in the new 750 kilogram formula, began in 1932. The decision to limit vehicles to a maximum weight of 750 kilograms (without fuel and tyres) was designed to restrict the power output, and therefore the top speeds of the cars entered in the races.

For this new racing formula, Mercedes-Benz developed a monoposto with a mechanically supercharged 3.4-litre eight-cylinder in-line engine and conventional architecture, with the engine at the front delivering power to the rear wheels via a gearbox on the rear axle. 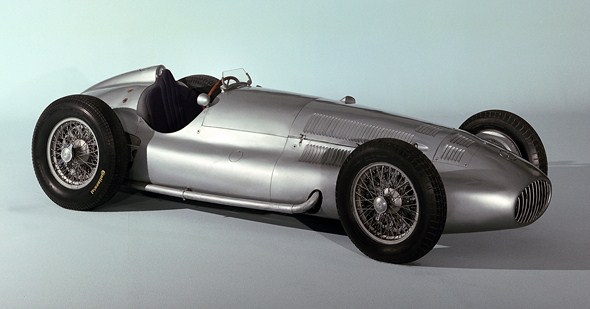 For 1937 only, the last season of racing in the 750 kilogram formula, Mercedes-Benz developed the W 125, driven by an enhanced version of the W 25 engine. However, the mechanically supercharged eight-cylinder in-line M 125 F engine had the supercharger placed downstream from the carburettors.

This technology, which had never been used before in a Mercedes-Benz racing car, meant that the mixture was formed prior to compression. From its cubic capacity of 5663 cubic centimetres, the M 125 F engine developed an output of 592 hp (435 kW), with a top speed of around 320 km/h.

The car was based on a steel frame with four cross beams. The front wheel had double wishbones and helical springs, and there was a De Dion double-jointed axle at the rear. Following extensive testing at the Nürburgring racetrack, Rudolf Uhlenhaut, the design engineer responsible for the development of the W 125, opted for a revolutionary chassis design with soft springs and exceptionally long spring travel. An unmistakeable trait of the W 125 was the three cooling air inlets at the front.

A new Grand Prix formula came into effect in 1938, based on maximum cylinder capacity rather than a maximum weight as the primary design factor: 4.5 litres for naturally aspirated engines and 3 litres for supercharged engines. New weight limits of between 400 and 850 kilograms were also specified.

For this new formula, Mercedes-Benz developed the new W 154 racing car with a mechanically supercharged V12 engine. The design of the chassis and suspension was based on the concept used in the car from the year before, the W 125.

The W 165 racing car, fitted with an 1.5-litre V8 engine, was developed by Mercedes-Benz for a single race, the Grand Prix of Tripoli in 1939. This was because of the decision of the event organisers in the Italian colony to specify the “voiturette” formula, with an 1.5-litre engine, for the race. 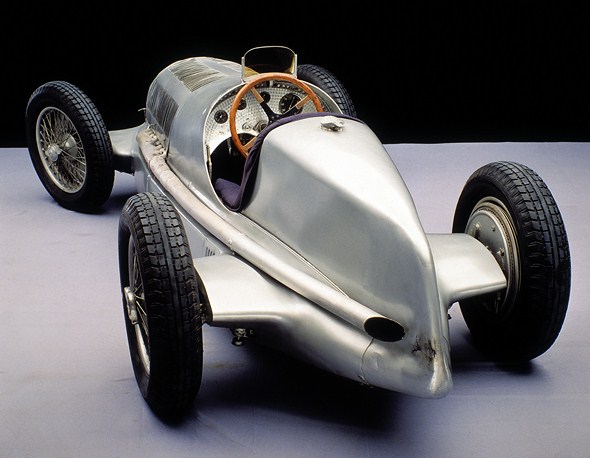 The aim was to eliminate the competition from the Germans, since Mercedes-Benz, which had won in the Tripoli event in 1937 and 1938, did not have a racing car in this class. Yet the racing department in Stuttgart managed to build a new monoposto for the 1.5-litre formula in just eight months.

Many of the structural design details of the W 165 were based on the current Grand Prix car at the time, the W 154. The mechanically supercharged V8 engine with cubic capacity of 1493 cubic centimetres delivered an output of 254 hp (187 kW) at 8000 rpm, with a top speed of approximately 272 km/h. 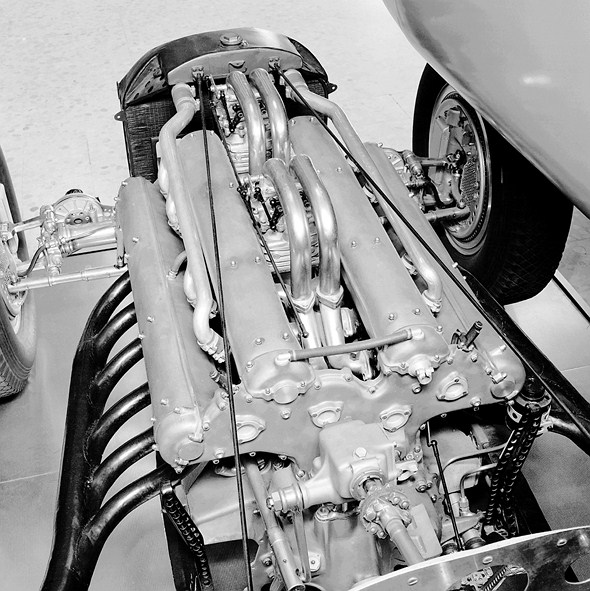 Vehicles specifically designed to break records, based on Grand Prix racing cars, were a high priority for Mercedes-Benz in the 1930s. In 1936, the racing department in Stuttgart produced the first vehicle with a fully streamlined body, including the wheels and underbody: the W 25 record car with a V12 engine. 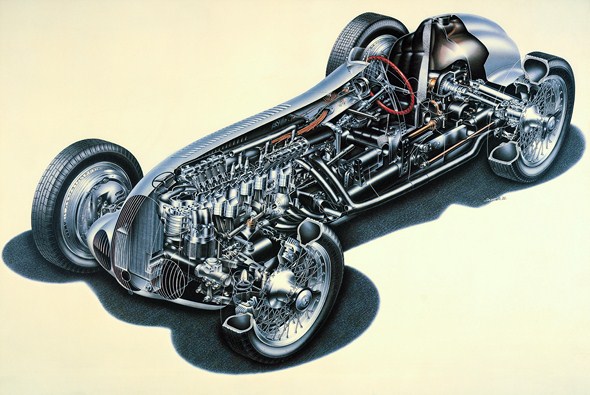 The streamlined body shape was optimised in the wind tunnel, making the W 25 record car of 1936 a pioneer in the development of science of aerodynamics as applied in automotive technology today. The car was powered by the MD 25 DAB/1 V12 engine, developing 616 hp (435 kW) from its cubic capacity of 5577 cubic centimetres. 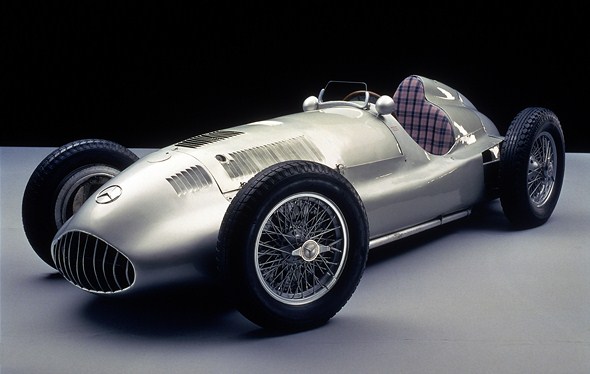 At the Goodwood Revival (14 to 16 September 2012), Mercedes-Benz Classic will be represented with five original Silver Arrow vehicles from the 1930s, including staging a simulated race against Auto Union cars. This will be the largest collection of Silver Arrow cars seen in one place for several decades.