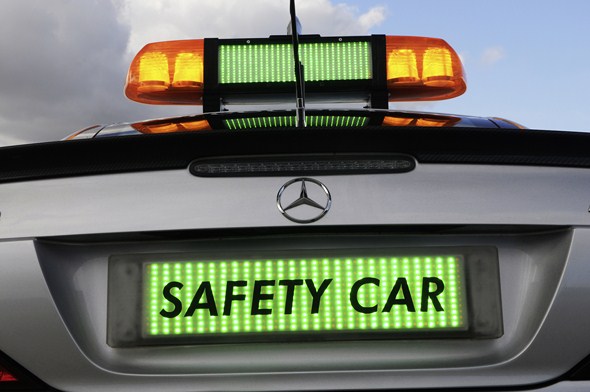 Stuttgart – In the first race of the 2009 Formula 1 season a Mercedes-Benz SL 63 AMG was the first car to cross the finishing line: powered by the 386 kW (525 hp) 6.3-litre V8 engine, the high-performance roadster, which could sprint from a full stop to 100 km/h in only 4.4 seconds, felt clearly at home on the racetrack.

All the same, the sports car was not one of the racing cars vying for the title in the elite class of motorsport. Rather it guided the field to the finish as Safety Car after a collision had occurred between Sebastian Vettel and Robert Kubica. In the 2009 Italian Grand Prix, the racing cars again finished behind the SL 63 AMG.

Since 1996 Mercedes-Benz has provided the Safety Cars in each season for the races of the Formula 1 world championship. The first Official F1™ Safety Car from Stuttgart was the C 36 AMG from the 202 series – the first car jointly developed and marketed by AMG and Mercedes‑Benz – in 1993.

Since then it has always been top models from the performance brand AMG that have assured safety on the race courses of motorsport’s elite division. For four years the respective top-of-the-range version of the R 230 was used: first the SL 55 AMG in 2001 and 2002, with the SL 63 AMG following in the 2008 and 2009 seasons. Since 2010, as ninth generation to date, the Mercedes-Benz SLS AMG has been used as Safety Car.

The choice of the SL Roadster for use on the most famous racetracks of the world has a special historical component. After all, the story of the Mercedes-Benz SL-Class does begin with a racing sports car, the SL 300 of the W 194 series from the year 1952.

In comparison with production cars, the SL models of the R 230 series feature appreciable modifications for their use as Safety Cars in the Formula 1. For one thing this concerns the signal and communication technology to allow them to respond rapidly and also to make sure they can be seen clearly even in adverse conditions. 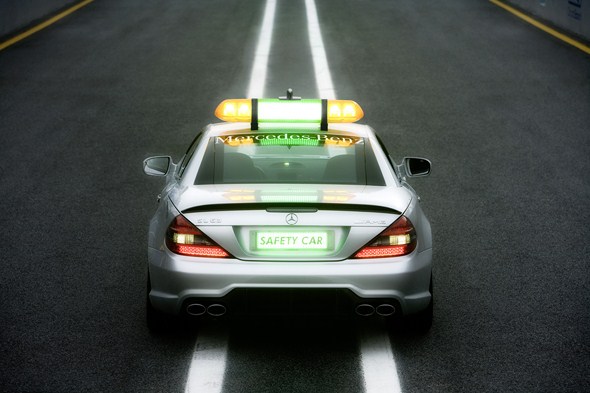 Typical modifications are the installation of a yellow and green signal lamp system on the roof as well as flashing front lights and flashers in the rear lights. Also included are two separate radio installations for digital and analogue radio communication.

But the drive system and suspension have also been optimised to handle this special challenge of leading the field of high-speed formula racing cars during the Safety Car phases on racing circuits. Appropriately equipped, the SL 63 AMG reported for duty as new Safety Car in the 2008 season.

Among other things, the 386 kW (525 hp) Roadster had a newly developed AMG sports exhaust system with a larger pipe diameter as well as new rear silencers which allowed the high-revving AMG V8 naturally aspirated engine with a displacement of 6.3 litres to breathe even more freely. Special sound tuning thrilled the motorsport fans both at the tracks and in front of the television screens at home.

Performance treatment for use on Grand Prix circuits

The modifications for still better performance and driving dynamics are not just ends in themselves. Very high demands are made on the Formula 1 Safety Car and its driver; a driver with professional racing experience is a requirement.

In his high-performance production car he must set such a high pace for the Formula 1 cars that their tyres do not cool off too much even during the Safety Car phase. The flagship versions of the SL-Class and other powerful AMG versions of Mercedes-Benz cars have the right credentials for this and so have been providing this service since 1996. The improvements to the R 230 series aim at guaranteeing reliability even in tropical outdoor temperatures and over long distances driving at maximum output. To do this larger and additional coolers for engine and transmission oil, coolant and power steering have been used in the SL 63 AMG.

The newly developed aluminium coil-over suspension has been tried and tested in racing and provides top racetrack performance, feeling for the road and the typical sports car steering and self-steering characteristics. In addition, the wide variety of settings for vehicle height, track and camber allow individual suspension setups to suit the specific race course.

Lightweight design for the Formula 1 assignment

For the fast laps on Grand Prix courses the Safety Car should be even lighter than the production version if possible. At the front and rear the SL 63 AMG therefore has extra light 19-inch light-alloy wheels manufactured by a special forging technology.

The 8.5-inch and 9.5-inch wide rims are fitted with tyres from Formula 1 outfitter Bridgestone, size 255/35 (front) and 285/30 (rear). The design of the rims, featuring filigree twin spokes, optimises the cooling of the heavily stressed braking system, as does the special cooling air ducting. 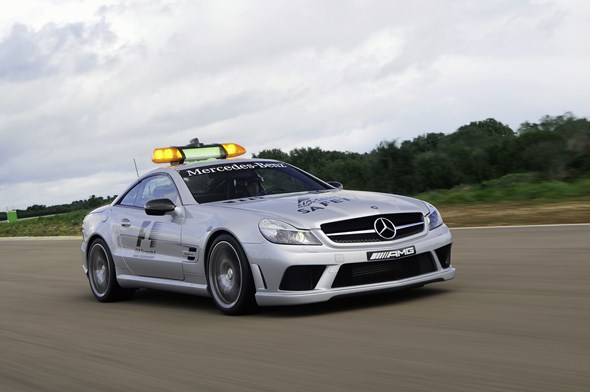 The results of these improvements are quite respectable: the SL 63 AMG as Safety Car weighs 220 kilograms less than the production version – despite a bigger braking system (including brake cooling), additional cooling measures, light system and communication equipment.

For the best possible racetrack performance, AMG experts make the bonnet, front and rear aprons, front wings and boot lid out of motorsport-tested carbon-fibre-reinforced plastic (CFRP). And since the Safety Car always needs to be driven with the top up, all the mechanical and hydraulic components of the vario-roof can be dispensed with. The insulating materials, which serve mainly to improve riding comfort, also can be omitted.

On the outside, the SL 63 AMG Official F1™ Safety Car for 2008 and 2009 can be distinguished from the standard AMG high-performance roadster by the roof bar with warning lights and the F1 logos first, as well as by the redesigned front apron with larger cooling-air openings.

A prominent feature at the rear of the vehicle is the modified diffuser insert in the rear apron, which incorporates the active rear-axle cooling to compensate for temperature peaks in the highly stressed differential housing. The number plate with “Safety Car” lettering is also entirely new. It can be illuminated by means of 672 light-emitting diodes (LEDs), which means it can be seen even better particularly in rain or darkness, thus making it even safer.

SL premiere in the Formula 1 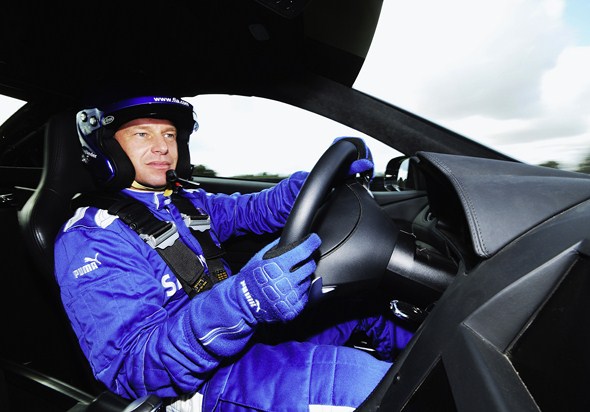 From a standing position the SL 55 AMG could accelerate to 100 kph in 4.7 seconds. When it was introduced, the roadster was the most powerful passenger car built by Mercedes-Benz.

This Safety Car of 2001 and 2002 was also the model for the Performance Package offered by AMG in 2003. When this package was ordered, the SL 55 AMG was fitted with more powerful brakes, among other things, and the suspension tuning and wheel-and-tyre combination were also altered.

Sports-minded private owners thus profited from the setup that Mercedes-Benz driver Bernd Mayländer used in the Safety Car on the Grand Prix racetracks of the world. Details like this belong to the technology transfer from racing to series production which Mercedes-Benz has now re-introduced.

One of the most famous examples of this practice is the Mercedes-Benz 300 SL production sports car W 198 I of 1954, which was based on the 1952 racing sports car bearing the same name.